RE: @ned - are we on the verge of a Steemtrain wreck? Answer NO - BUT THERE ARE STILL VALID CONCERNS

Ah, so that's loki. All I remember is that he ragequit witnessing when no one took him seriously. Anyway, pretty much everything in that post is pure FUD. If anything, it just reveals his total incompetence at running a Steem node. I don't understand A or B of development, I'm pretty much a n00b compared to seasoned developers or IT admins. Yet I find it really easy to get Steem up and running. Sure, it takes a few hours to sync if you're starting from scratch, but that's a one time thing.

Poloniex had over 15 coins disabled earlier this week, now it's down to 8. It's not just Steem. Clearly they are having issues.

Steem is now processing more transactions than Bitcoin and Ethereum combined. Unlike those two, it's not choking with ridiculous delays in block time or anything. Sure, plenty of optimization needs to be done, particularly with I/O usage. Work is ongoing, and it might be a couple of hardforks more before Steem is ready to scale to the millions. But there's nothing here that suggests there's any existential threat to the network at all.

You can look at the #witness-blocks channel on Steemit.chat to see how incredibly reliable the network has become. Missed blocks are very rare - in fact I couldn't even find a single one in the last couple of days.

I don't think a response is warranted from Steemit Inc when it comes to such unfounded nonsense.

I hope you will see the evidence and retract this post so as not to spread further FUD. Thank you.

I hope you will see the evidence and retract this post so as not to spread further FUD. Thank you.

Why would/should he do that? Disputing criticism is always better than ignoring it. Of course if someone is just spamming insults it is OK to flag or want it to be retracted, but as long as there are civil arguments being made I think they need to be answered, which I think you did with this comment. I don't understand the nitty gritty of the blockchain, but I dont think talking about potential flaws is FUD.

@liberosist, I do completely agree with you. There are a lot of negative stuff going on regarding steemit. The fact, Steem is now processing more transactions than Bitcoin and Ethereum combined has made it great . And every great things come under the radar of crticism. If we talk about the technicals, Steem is wroking fine, there's no downtime and the problem of bandwidth has also been resolved now. When it comes to exchanges, they their servers always get overloaded with transactions. Last I tried to withdraw my Verge, guess what, it's withdrawal was also under maintenance. So this problem is hapenning with all the other major crypto's. Poloniex has the highest volume, that's why it disables most of the withdrawal requests from most of the cryptocurrencies.
Steem is doing just great and it has a lot of supporters. LIke you, who are curating the best content here. It is the first social media platform on decentralized and blockchain tehcnology and many people have invested their fortune in steemit. I am sure, it ll survive all the odds. You and people like @ned , working hard here to make it even better.
So, I would like to thank you and all the other major people who're making awareness about this platform and helping people to use it more often.
Thank you.

Poloniex has the highest volume, that's why it disables most of the withdrawal requests from most of the cryptocurrencies.

Poloniex has horrid customer support, and other than having nice looking graphs and a low fee they are not that great of an exchange lately. They received one of my deposits and never actually deposited it. Two tickets were ignored and months later still nothing. That wasn't the only issues I had with them just the one that finally made me decide to stop using them and that was several months ago.

Always two sides to every story 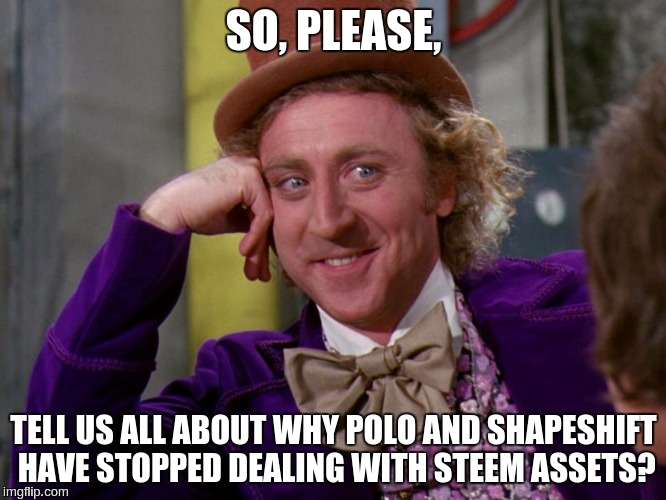 That there is a clusterfuck of other coins having problems does not count.

What about shapeshift also. They quit dealing with steem at least 2 weeks ago.

tradequik just got stuck 2 days (and are they still offline?) on 'routine automated maintenance'.

When I got my powerdown two days ago, there was literally only one way for me to trade my steem for dash, Blocktrades.

And why is it that you all are using self-votes to push your comments upwards. Have you got something to hide?

It sure looks like you got something to hide, all of you.

You are one of the preminers, aren't you. Who in the preminer circle, isn't being blackmailed into presenting a united front? @berniesanders admitted that he was a preminer also. 'just so I knew'. I believe that you assholes also are having some issues with him lately...

Thank you for this perspective @liberosist, it really helps.

Hi @benjojo I've published a post about you, check it out if you can, thanks.

Thank you, I feel better already!

If he retracted it then we wouldn't see your response. I saw the original elfspice post and had been planning to look into it as it is not something I (many of us) have researched and would have any authoritative information on. Questions need to be asked so answers can be provided. Also one of the great things about steem is the transparency. Too many things occur outside of it that cannot be tracked, documented, etc. Talking about problems outside of the blockchain rather than on it seems like a step in the wrong direction.

I do thank you for your response. I actually believe someone addressing the elfspice post without ad hominem attacks and such and just providing us a blow by blow of why the points are not an issue would be a valuable post at this time. Saying "don't worry, they can't run a node, and don't know what they are talking about" is an appeal to authority. You didn't say those exact words I am paraphrasing. Such statements can reduce confidence in your response. The rest of the information was welcome though, and I for more would be interested in MORE information.

All of the information I'm aware of is within my response. I could have made an objective list, but I'm a human being and delight in creative communication. But I'll make that list just for you -

Of course, all of this information was covered in my original reply.

That was not my point at all. You recommended the person retract their post. If he were to do that people would not see your reply. That was my point.

I see what you mean. To clarify, my intention wasn't to recommend the OP to delete their post entirely. In hindsight, I should have worded it better. I was going for the traditional meaning of retract, i.e. "withdraw statements as untrue and unjustified"; rather than removing it entirely. My reply would still have stood, with enough context to give it meaning. That worked, this post stands a lot more balanced than before.