Human, Spammer or Bot? Whom are you talking to? A useful extension that helps categorize accounts

Have you ever wondered if the reply to your blog post is genuine or not? If it was done by someone who actually took the time to read the entire post or was just done by an automated script fishing for some upvote or follow? Well now, with the help of an awesome extension, you can now possibly tell if the account is a real person, a likely spammer or a Bot.

Almost a month ago, I've posted a guide and an easy way on "How to Hide Resteems" on your feed. The very tool and extension I used in order to achieve that well sought feature is called Steemplus. Just yesterday, Steemplus upped their game by adding another awesome feature, and that is categorizing accounts into three categories: Human, Spammer and Bot. To which you can read the complete details here : SteemPlus 2.8 : Steem Sincerity

As seen below, whenever the account's overall activity resemble that of a normal user. A "Human" label is seen beside the username. 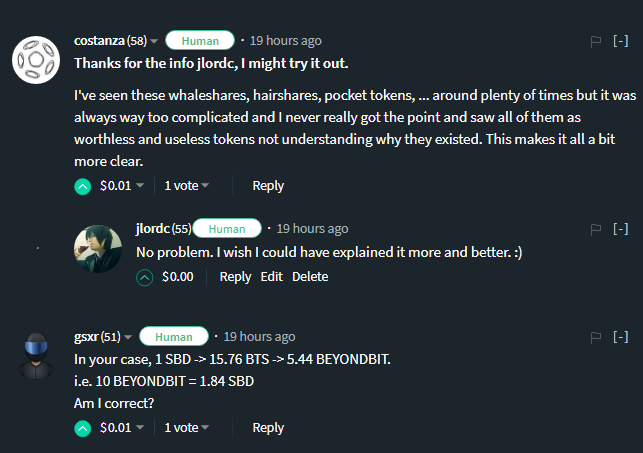 And an obvious Bot will get the "Bot" label

Since it is quite impossible to accurately categorize anyone as a human or a spammer base on their activity alone. I mean, there are days when you are just to lazy and too tired so you ended up writing some lame ass comment. The extension breaks it down to percentages on how likely the accounts activity is. Is the categorization 100% accurate?

NO! Like I've said it is quite impossible to accurately categorize anyone. One who posts mostly via Dlive, Dtube, Steepshot will most likely get the "Spammer" label due to the little texts they write in their blog posts. A Utopian-io moderator could be labeled a "Bot" due to their mostly repeated copy paste comments. But this extension is a great start.

If you see someone with the label "Spammer", you can have your guard up. You can then check the breakdown in percentages to see how he is likely a spammer. An above 85% will likely ensure that. So the next time you get a 'nice post! keep up the good work sir', don't feel excited and elated. Most likely it's just a spammer fishing for some upvote and follow.

This is a great post and informative. I've always wondered how to derermine if the poster is a real person or not. Resteemed!

wow,its really a good extension.
can i use it in my smartphone ?

Probably only available on pc since it's an extension