Not much has changed for the month of April either. I've been mainly focusing on trading crypto and trying to get some sleep at night with a new-born daughter. I've thought about posting during the late nights, but by the time I have time to make a post my mind is usually mush and I try to only publish articles that create value. I made a terrible trade and a great trade in EOS. To start off with the terrible trade I panic sold some EOS for a 10% profit after I watched the price of XEM pump and then dump in a matter of days. I thought EOS was going to do the same thing so wanted to take a small profit and ended up selling the bottom of the run (still a profit, but a terrible place to sell).

I was also able to sell some EOS near the top. It's not indicated on the chart below, but it was 3 - 4x the point at which I bought and it was right after the EOS market began to turn down. I'm pretty proud of this trade but have to admit it was pure luck. I saw the chart begin to run straight up and new a correction was bound to happen sooner or later and wanted to sell into strength. 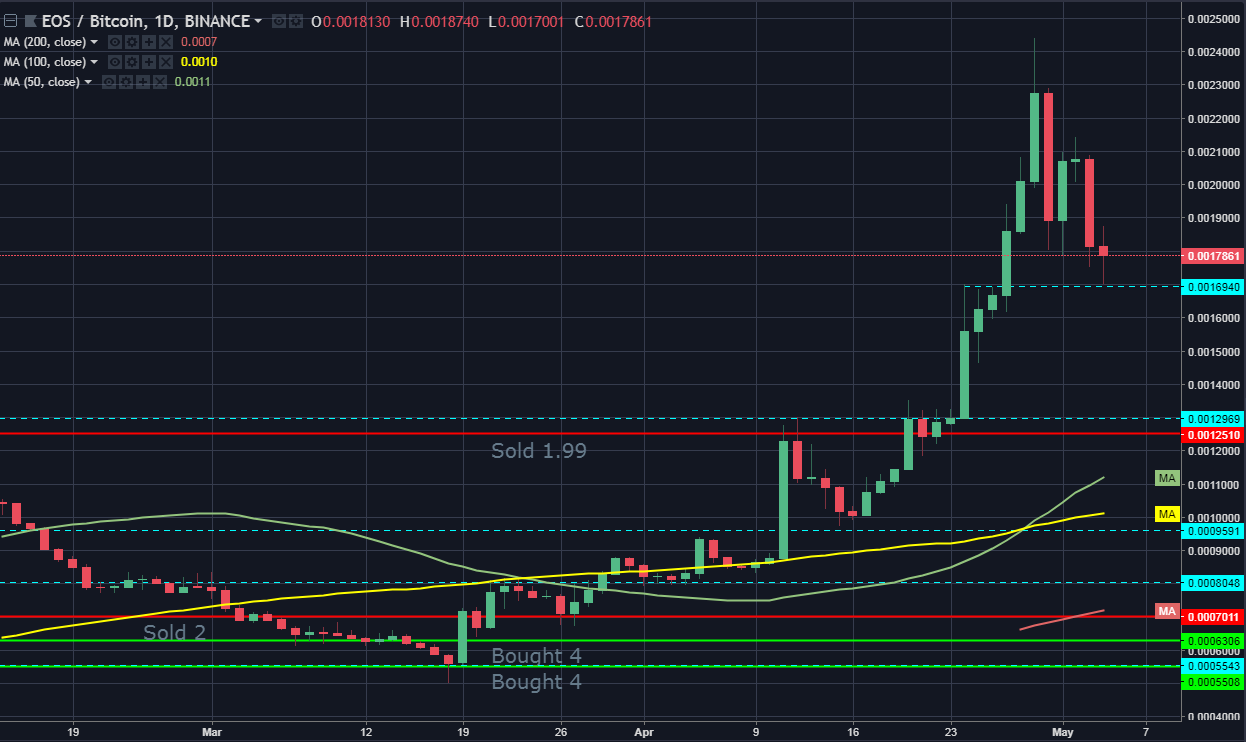 16,940 seems to currently be a good support for EOS currently. I myself will be waiting until the price of EOS drops back to around 8000 Satoshi (which I believe will be the accumulation point during the next crash). I bought near the bottom, sold near the current top, and have a small bag that I will ride to the moon or to 0 since I've already made my profit on this trade. If you want to FOMO into EOS set some buy orders at 13,000 which is the next support level of EOS and I think was the previous ATH.

7870 -> 7922 I've finally decided I want to write most if not completely on crypto and trading. I used to think that writing about crypto on a crypto platform was oversaturated, but I think I've spent enough time, accumulated enough knowledge, and still hungry about learning and sharing more on crypto. Would you like to see more on crypto on this account or should I create a crypto only account?

I didn't include much of an explanation for each subject this month due to the fact that not much effort was put forth on Steemit so not much to analyze. I'm hoping to start back up on my normal Steemit responsibilities starting next week and apologize for my prolonged absence after my beautiful daughter was born.

Sounds like you are eager to get back into the swing of thing. Have a wonderful weekend. If you are not active next week people more than understand enjoy the time with the little one :)

@gniksivart You have earned a random upvote from @botreporter because this post did not use any bidbots.

Although I don't read that many crypto posts I'd be glad to get some quality info.

Would love to hear your thoughts