Blockchain Resiliency & Community Impact [Recap of our Talk at The World Bank in Washington D.C.] 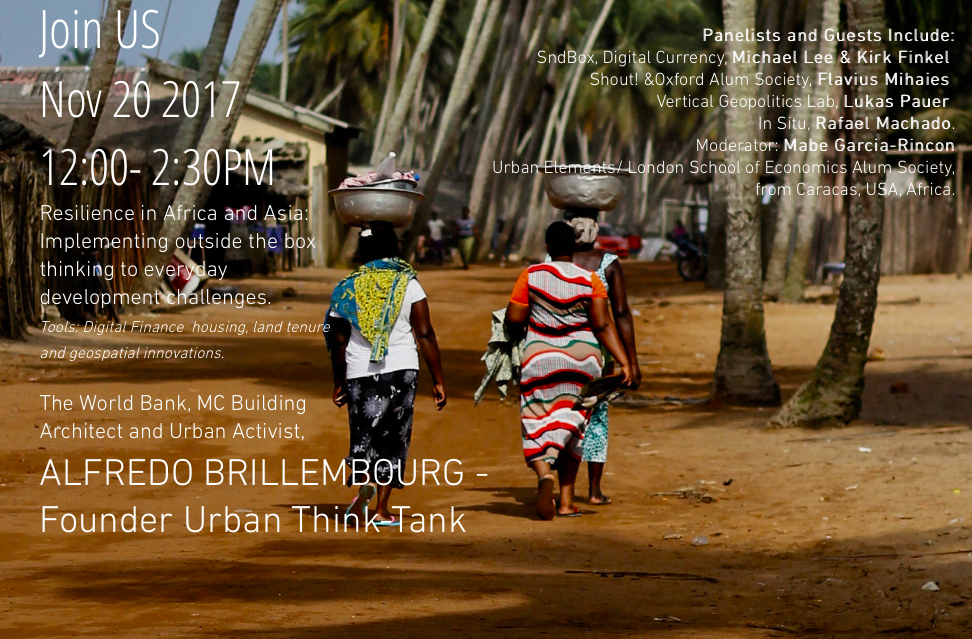 Last week, @sndbox headed to Washington D.C. where we were invited by the World Bank to do a presentation titled “Blockchain Resiliency & Community Impact.” Our talk showcased the many community-building initiatives specifically within the Steem ecosystem and additionally how cryptocurrencies like Steem are already acting as an accessible resource for parts of the world without brick and mortar bank-infrastructure.

We were very fortunate to take part in this engaging roundtable among leaders of the social housing and planning domain. The lively conversation revolved around financial and infrastructural resiliency for World Bank sites within Africa (predominantly South Africa) and Southeast Asia. Before getting into the roundtable discussion and takeaways, here is some useful background regarding the World Bank:

What is The World Bank Group?

The World Bank is a 72 year-old financial institution that provides loans to countries for capital programs. It is one of the largest institutions globally, worth close to $252.8 billion dollars (in capital). The Bank is headquartered in Washington, D.C. in the United States, and has over 10,000 employees stationed in 120 offices worldwide. The loans they provide countries are used for a wide range of projects concerning health, agriculture, infrastructure, climate change and environment.

The goal of this roundtable was to cultivate a discussion surrounding the benefits of new technologies as they relate to parts of the world that are especially vulnerable to climate change. The word “resiliency” refers to stability and adaptability. Urban planners have been using this term a lot recently as they find themselves designing plans for coastal regions that are prone to flooding and extreme weather conditions.

“Resiliency” also applies to finance. And this is where Steem (and the blockchain) comes in. As part of our presentation, we spoke about the benefits of utilizing Steem as an accessible monetary infrastructure that can be applied towards at-risk regions around the world. The roundtable was incredibly open, productive and deeply critical of existing practices. We were surprised and encouraged by the transparency of both the speakers and hosts. The event was moderated by Maria Beatriz Garcia Rincon (an Urban Development Specialist at The World Bank). @sndbox spoke in between two presenters:

One of the biggest topics of the roundtable was regarding access. There are major logistic, political and communicative challenges regarding getting World Bank resources into the most effective hands. This has been a major problem in the past, where funds meant for “public” infrastructure have been manipulated for private and political gains.

For all projects, the World Bank partners with thousands of Civil Society Organizations (CSOs) at the global, regional, and country levels. These CSOs are made up of a family of NGOs, trade unions, faith-based organizations, indigenous peoples movements, foundations and many others. These community leaders have a unique pulse on local needs and resources.

In our presentation @sndbox framed CSOs within the context of blockchain witnesses and community guilds on Steemit. Our goal was to help the World Bank visualize how community leaders and guilds can be elected (witnesses) to act as stewards over the infrastructure necessary to empower local initiatives. At a much smaller scale, this is essentially what the @sndbox incubator emulates with Sndcastle projects.

CSOs acting within the Steem ecosystem would be a disruptive community experiment for three big reasons: transparency, reputation score and empowerment:

As witnesses, CSOs could be voted on by the public they serve. Witness earnings could then be used to aid the growth and operations of entire process.

Our team also spoke briefly about Steemit’s “communities” and Steem’s “social media tokens” as new tools to support a network of their unique size and complexity. Of course, the conversation was more geared towards what @sndbox has physically done already - through projects like STEEM Park and Sndcastle’s. These proof-of-concept projects helped provide grounding as the conversation expanded (and it expanded quickly!)

We were encouraged (even surprised) by the positive reception to these ideas. As we’ll get into further down, we spoke directly about community structures in Khayelitsha (Cape Town, South Africa) and how neighborhoods like this one could benefit from Steem. A big portion of the talk surrounded strategies to better engage local stakeholders in large-scale urban planning decisions. A pioneer in this space is Alfredo Brillembourg of Urban Think Tank. He presented his work on the Empower Shack, a grassroots housing project designed to flip the hierarchy of urban planning and give voice (and equity) to local residents.

Empower Shack is housing prototype in the informal settlement of Khayelitsha (Cape Town, South Africa). As part of this project, Brillembourg’s team spent months surveying and speaking with each resident. Workshops were held to make the planning process transparent but also a direct and democratic translation of the feedback that they received. Through these methods, U-TT developed a new kind of crowdsourced housing model that not only provided a safe roof over deserving residents but also ownership, where ownership did not previously exist. Take a look at their video here:

Empower Shack rallied a local community and created a game-changing landmark. @sndbox spoke at length with the Vertical Geopolitics Lab and U-TT to imagine how the Steem ecosystem could further this initiative and perhaps make it even more accessible (both socially and financially).

Our team @sndbox is coordinating with the World Bank with the goal of making this roundtable an ongoing series, beginning in the Spring of 2018. Additionally, we're working behind the scenes on a series of projects that would serve as a big next step from STEEM Park. We believe that Steem represents a disruptive resource that can empower communities just like Khayelitsha. If we can leverage the Steem blockchain to create a physical community park... then why not a house? Stay tuned as more develops.

Wow, this went really well!! So so pleased to hear it.

Interesting to learn more specifically how decentralization has such potential to remove existing obstacles they struggle with to meet their goals and incredibly hopeful that the World Bank is open to considering and possibly implementing and this kind of paradigm shift.

you guys are doing such great work!!!

So good News @sndbox team! I think they will be very close to you and the Blockchain. They -must- and should do it as a system, not only for the humanitarian issue, most of it because as a financial infrastructure power should be aware of what is happening with the blockchain as tool (even because it's the BEST tool ever made to combat corruption) that is one thing that make them lose so many money.

So, I think that is going to be one of the main reasons for them to be so close. And in the other hand for the marketing Job, of course... they will be deep as they can into the blockchain. With all the Bitcoin experience they started to watch seriously every step people is doing with technology even for; control as for personal incomings.

But as I always say: If we think about people, about communities and life, we are always one step ahead. So we know how to use resources in a better way, even if they are in there just to check how the system works....

Just take care and make that part of the System understand that the World will change, and that change is called Blockchain! and there is not a way back for that change. :)

Where does the World Bank get the money from?

Hi @photoquest - It's a similar structure to any other bank, they create loans, receive interest, have debt offerings. We don't have much background on that though (being designers ourselves) you can learn more here.

Thank you.. that was a great response

No problem! Our goal with this talk was to open them up to alternative resources (like Steem) that could help the communities they operate in. Being one of the biggest financial institutions in the world, a "conversion" into cryptocurrency is quite a tall order. But they were very receptive and motivated to continue the conversation.

awsome work
it's great to read

Hey - thanks for the article. Nice to see something less technical for a change. Would love to hear your thoughts on mine (ties in with blockchain, but more about the human impact): https://steemit.com/blockchain/@rebeccamqamelo/on-storytelling-ancestors-and-algorithms-a-conversation-with-ernesto-reyes

you are most [email protected]

New records broken yet again in the task of making steem ecosystem a global household name! This is a very commendable action on your part. Keep finding the path. We are solidly behind you guys