STELLABELLE GIF + WAKANDA AFRICA STEEM GIFS + NEW SURFYOGI GIFS. ACKZAS IDEAS FOR GIFS ARE BEING PRODUCED. I AM CREATING A SERIES OF GIF ANIMATION ARTWORKS THAT FEATURE WHALES, EVENTUALLY COMBINING THEM ALL TOGETHER INTO A STEEM-WORLD GIF!

I am slowly creating a world where the steemians will live on through my art. Its like in the renisannce, the painters would create works for the patrons of the arts. One of the main patrons of the arts here on Steemit is @stellabelle.

She is an artist as well, but is making a huge effort to organize a crypt-oriented art community based on her mythical creature the "Slothicorn" which is a sloth combined with a unicorn.

She runs the @slothicorn account which is an account that curates CRYPTO THEMED ART. Using the hashtag #slothicorn puts your post in the queue of listings that the slothicorn has to go through to see if it should be upvoted.

I kept expanding her gif, which was originally used based on a party pic of her, to have UFOs flying in a vaporwave city beaming down superluminal light onto a solar panel that charges up a STEEM FAN to float her big chunks of steem!

I hope she likes it lol.I went full vaporwave on this one. lots of pinks and light blues. aye its crazy, I had fun making it. It took like 7 hours to make. A worthwhile Saturday. Another Gif checked off @ackza's GIF list.

OF COURSE THIS IS ALL CREATIVE COMMONS! Spread it far and wide and remix the hell out of it!

@ackza originally sent me this image as a starting point 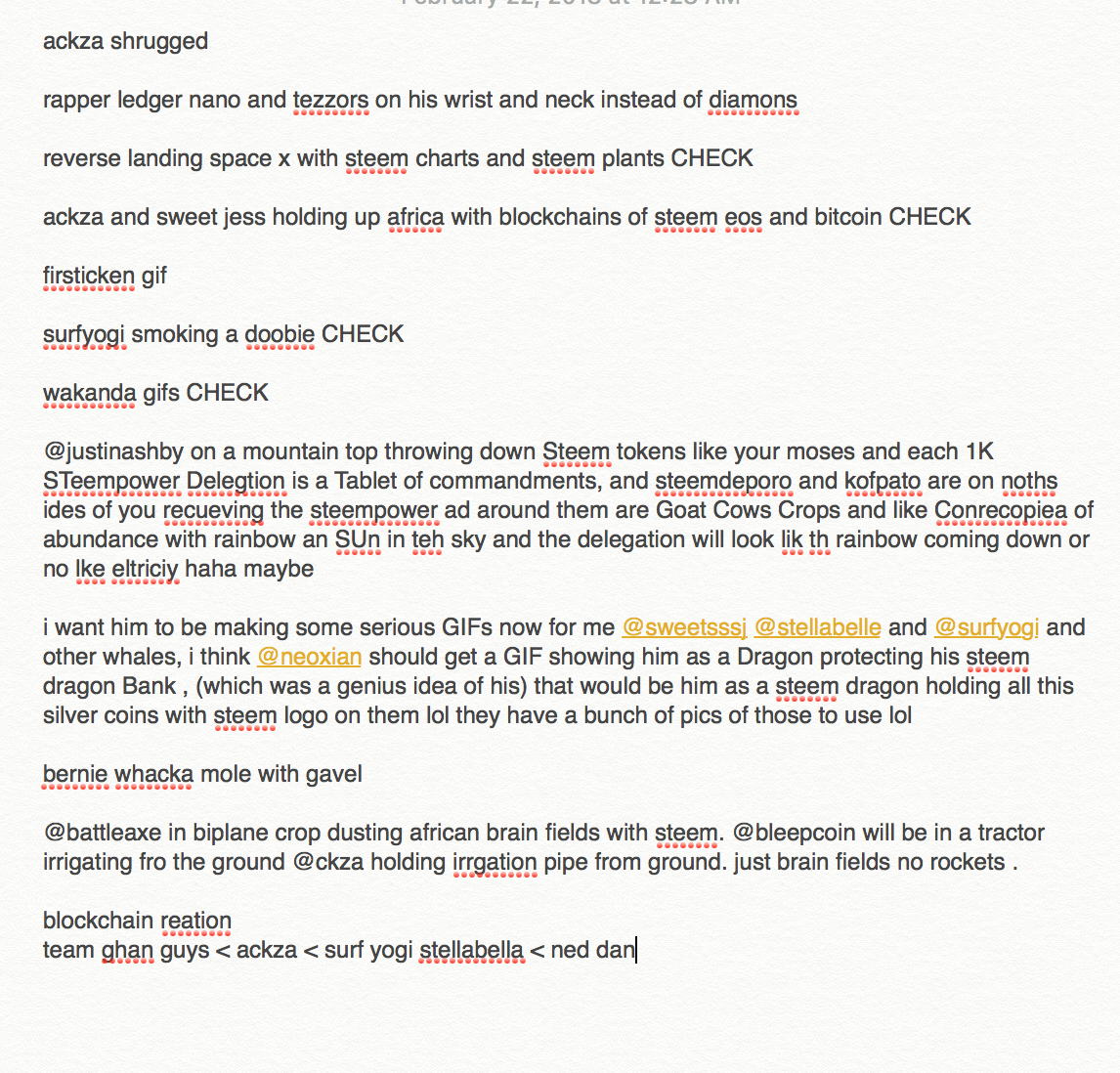 @ackza sends me crazy long text messages too where he just lets his ideas fly. I later have to decipher his intelligible messages and creatively translate them into animated art.

I kept expanding the height of the Gif and it made me think, I should combine all the gifs that I have made for people into one Giant Gif. I wonder if that's possible.

I could then split them up into separate images and post them on Steemit without a white space in between.

Ackza paid me 15 steem for that last gif I did of him and @sweetsssj holding up africa with steem eos bitcoin blockchains.

I used some of the Steem that he sent me to go the Movies!

I went to see Black Panther, a new Marvel movie. @ackza was saying how I should make some gifs relevant to the movie in relation to how he and the TEAM GHANA crew which @stellabelle and @surfyogi are a part of as well, are funneling steem to underdeveloped nations in africa.

@ackza's imagination ran wild with this idea, he imagined Africa transforming into a super technological paradise, sustained by STEEM!

"Internet infrastructure is how it all starts," Ackza explains.

So, a bunch of good Steemians have been delegating steem power to these Africans and they have been really using steem to turn their communities around. Go look at @battleaxe, @ackza, @surfyogi's blogs. They are the main ones that I know of who are spearheading this TEAM GHANA movement.

The people in Ghana got a soccer game going with real jerseys and stuff and printed the names of the funders on the back!

@surfyogi told me to add some ganja mon, to his gif, I ended up making him his own custom gif that he can use in his posts.

There is no wave, cybernetic or biological that SURFYOGI can not ride! He navigates his way through the fractal network of the universe shedding STEEM in his wake! Searching long and hard for Steem Artists worldwide, his quest brings him to many newfound lands unheard of by mainstream cyberspace, where he finds an abundance of steem shredders pumping out animated gifs and other forms of web gnar!

Alright the formatting of this post is going haywire! I'm going to have to wrap this post up soon here. Alright big thanks to @ackza and all the people doing the TEAM GHANA MOVEMENT. Shout out to STELLABELLE @stellabelle! The slothicorn account is awesome, as is the effort to be creating CRYTPO THEMED ART! Shout out to @surfyogi and what he has been speaking about @artzone..... I'm interested to hear more about that, a steemit art clan!

This work is licensed under a Creative Commons Attribution 4.0 International License

Amazing!
Can you please tell us more about what is up with the Current Maquavis Iteration Layer please?!

You are in my wave

I uploaded it to Giphy, I hope that is ok. I added the source page to the Gif, so people can come back to this page and find your stuff.

DDDDDDUUUUUUUUDDDDDDEEEEEEE!
This freaking blew my mind apart!!!
THANK YOU SO MUCH FOR CREATING THIS FREAKALICIOUS GIF.
My only request: can you please upload this to Giphy because the file cannot be uploaded to social media like Twitter!
You're awesome, seriously love what you are doing. HOLY CRAP! RESTEEM!

I have been a little late getting over to see this... Wow.
Blowing my mind man, and I thought I was the head!

I will hope to be worthy of such high praise.
Peace Out

this is but chapter 1 of surfyogi's gif legacy ... many more to come!

You are so damn good at these gifs. What a great way to spend a Saturday. Yes i really like all the blues and pinks in that too. It's a really satisfying image to behold. Resteemed

Man are gifs gifted and superb. It's really awesome. And yeah @ackza's, @stellabelle and @surfyogi's contribution to the growth of the Ghana community is really great. I personally can't thank them enough cause hardly would you get people this concerned about others.

Vaporwave, occult, outrun, cyberpunk and Black Panther wrapped into one post? Yep you're the winner for the best post I've seen since I've joined steemit!

Awesome post, I have no idea what you were trying to say tho, but who cares it was entertaining non the less! Rad gifs you make bro! Do you say Ggif or djiff by the way?

Thanks! I say GIF like "gift". What part didn't you understand?

i think thats actually the correct way to say it

I think so too but it will forever be gif (as in gift) to me!

Epic work dude.These gifs are straight out of a 420 brain.They look so rad.

Here is the link to all the Giphy links:
https://giphy.com/gifs/slothicorn-stellabelle-3de4N46Tp2upDxEnTC

great post and so lovely.
Dear can you tell me how to I get licence of slothicorn ?I wish you will tell me and I am waiting for your answern
thanks

you just add #slothicorn to one of the hash tags on your post. and add a creative commons logo to the bottom of your blog and put "cc-steem" as the second hash tag or whatever crypto your art is about