How to tell the difference between crocodiles and alligators!

I’m sure a lot of you have wondered what exactly the difference between an alligator and a crocodile is. When I was younger I thought it had to do with whether they lived in freshwater or saltwater, but this is just a vague and quick way to separate them most of the time, and not really a good way to tell them apart. If you’re unsure how to tell the difference, then you’re in for a treat, because we’re going to be looking closer at some of the biological differences between the crocodiles and alligators! Is this an alligator or a crocodile? Keep reading and you will definitely be able to tell! (Or click on the image credit if you want to cheat!) Image by Norbert Nagel, posted with the Creative Commons Attribution-Share Alike 3.0 Unported license.

Also as a digression, a “third type” of Crocodilia is called a caiman. These belong to the same family as crocodiles, but have their own subfamily called Caimaninae. The species gharial (Gavialis gangeticus) is also a Crocodilia member, but this single species has its own family Gavialis. However, this gharial is so different from both alligators and crocodiles, so it ended up there alone as the only extant member of its family.

Taxonomy can be a bit difficult to keep up with if you are not familiar with it, so don’t worry if it was confusing to you, because it is to most people. And to make matters worse, a lot of scientists are actually debating exactly how to classify the different subfamilies and groups, so they have been changed a few times in the past.

The different shape of their snout/jaw; the easy way to tell them apart

If you are attacked by a member of the Crocodilia order and wants to quickly identify it, then just look at their snout. Crocodiles generally have a long, V-shaped snout, while alligators have short, U-shaped snouts.

Now return to the picture at the top, and you can easily tell that it is in fact an alligator. Below is an image of a crocodile to compare it to. The reason why it is like this is because alligators are designed for insane strength, because they need to be able to crack turtles and other shelled animals, while crocodiles also eat much softer prey, so they don’t need the huge strength alligators have. The long snout/jaw is a lot better for catching fish, which can be seen very well by looking at the very long gharial snout.

The placement of the teeth You can clearly see the lower teeth, which means that this is a crocodile. Image by Leigh Bedford, posted with the CC BY 2.0.

The reason why their jaws are different once again has to do with the prey they eat, where the alligator needs more strength than the crocodiles.

There are of course many other differences between these two families of animals, since they are both genetic and evolutionary different. Both behavior, minor morphological structures and habitat can differ a lot, but the points I listed above are the major differences between them - at least the ones you can spot for yourself.

A good source that I used a lot when I wrote this article is this post over at crocodilian.com. This is a good resource to check out if you want to learn even more about the differences, so give it a click!
For the taxonomy, I just used the Wikipedia article about Crocodilia, as well as Encyclopedia of Life to verify the relationships.

Thanks for reading, and make sure to leave a comment below if you found it interesting!

Thanks for another great article. I learned something new. Just want to mention:

The reason why it is like this is because alligators are designed for insane strength, because they need to be able to crack turtles and other shelled animals, while crocodiles also eat much softer prey, so they don’t need the huge strength crocodiles have.

You mean aligator at the end there, right?

I'm glad you liked it, and learned something new, @dieterschneider! And you are absolutely right, I got them mixed up. Thanks for pointing that out :) 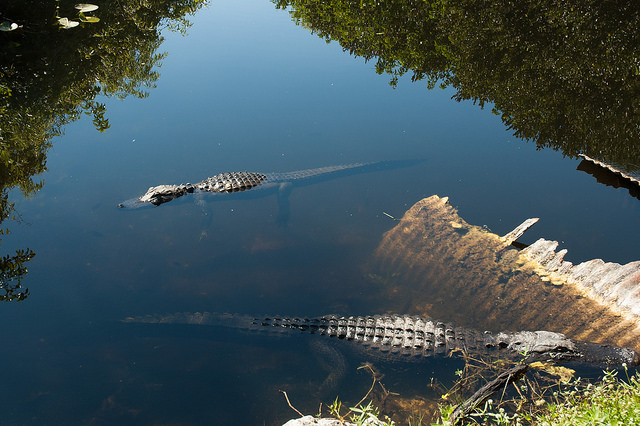 Another good piece mate. Living in Australia crocodiles are pretty common place in the northern areas. What I find crazy is that up in the north the crocodiles also roam in the ocean, making our beaches up there potentially deadly.... but trust me when i say not everything in Australia is trying to kill you :P. Most of the animals on the islands around perth are pretty harmless lol... as for the rest of australia not so much.

Thank you! Haha, I'll make sure to not wander too far away from Perth if I ever manage to travel to Australia then ;) It seems like nowhere is really safe in Australia; freshwater has crocodiles, saltwater has both crocodiles, sharks and jellyfish, while the inland has both snakes and spiders!

It is such a sharp contract to Norway where the last time a documented predatory human kill was around 200 years ago!

Yeah... There's a reason us Aussie are so cheerful!! We are just happy to be a live and kicking 😁.

All kidding aside, the closest encounters I've ever had was being stung by a jellyfish as a kid, stung by a few bees, waited patiently for some snakes to go on by, and while I was fishing knee deep in the ocean at fraser island a shark was roaming the area and scared all my fish away 😐.. I almost lost my shit when i realised how big and close it was... Never ran outta the ocean so fast lol.

Those are a good handful of close encounters :O It must have been extremely frightening to see a shark while in the water! I bet you've never ran that fast ever before.

It is always a perfect day when you are learning something new, so special thanks to @valth! have a wonderful day!

Thank you! I'm glad I was able to make your day a bit better ;)

Thanks you very much for increasing my knowledge...
I used to think that both alligators and crocodiles are the same....
And now when ever I see NATGEO I will be able to tell the difference,courtesy of @valth's post:)

Yeah, you should be able to tell the difference the next time you see them now ;)

Thanks, I'm glad you enjoyed to learn the difference, @kamchore! :)

And whatever is out there it's generally advisable not to swim in rivers/lakes that you can't see the bottom of if you know or suspect either of those live in the area? XD Handy tip about the teeth, I knew how to tell them by snout but not the teeth thing :)

I don't really know for sure, @ryivhnn, but I suppose you should not go for a swim if you suspect any of these to live in that lake/river. I'm glad you learned something new with the teeth; it's a much better way to tell them apart that works independently of the species, so it's very useful. Thanks for stopping by, @ryivhnn :)

Thank you! I am happy to hear that you liked it :)

The @OriginalWorks bot has determined this post by @valth to be original material and upvoted it!

I feel people dont know the differences because of they fall in tha same taxonomy.

I get what you're saying, but as I said in the post, their taxonomy is pretty different ;)

Well done! This post has received a 10.00 % upvote from @litasio thanks to: @steemstem-bot. Whoop!

This post has received a 0.78 % upvote from @drotto thanks to: @steemstem-bot.