During our testing of the 'hydrogen plasma processor' a modification of which is used for producing the ECCO foil, we experienced a few, incredibly short burst of extremely bright light, the duration of which appears to be about 1/40th second accompanied by a click sound. here is the peak of one such event, capture on the GoPro 3 at 1080p 60fps. 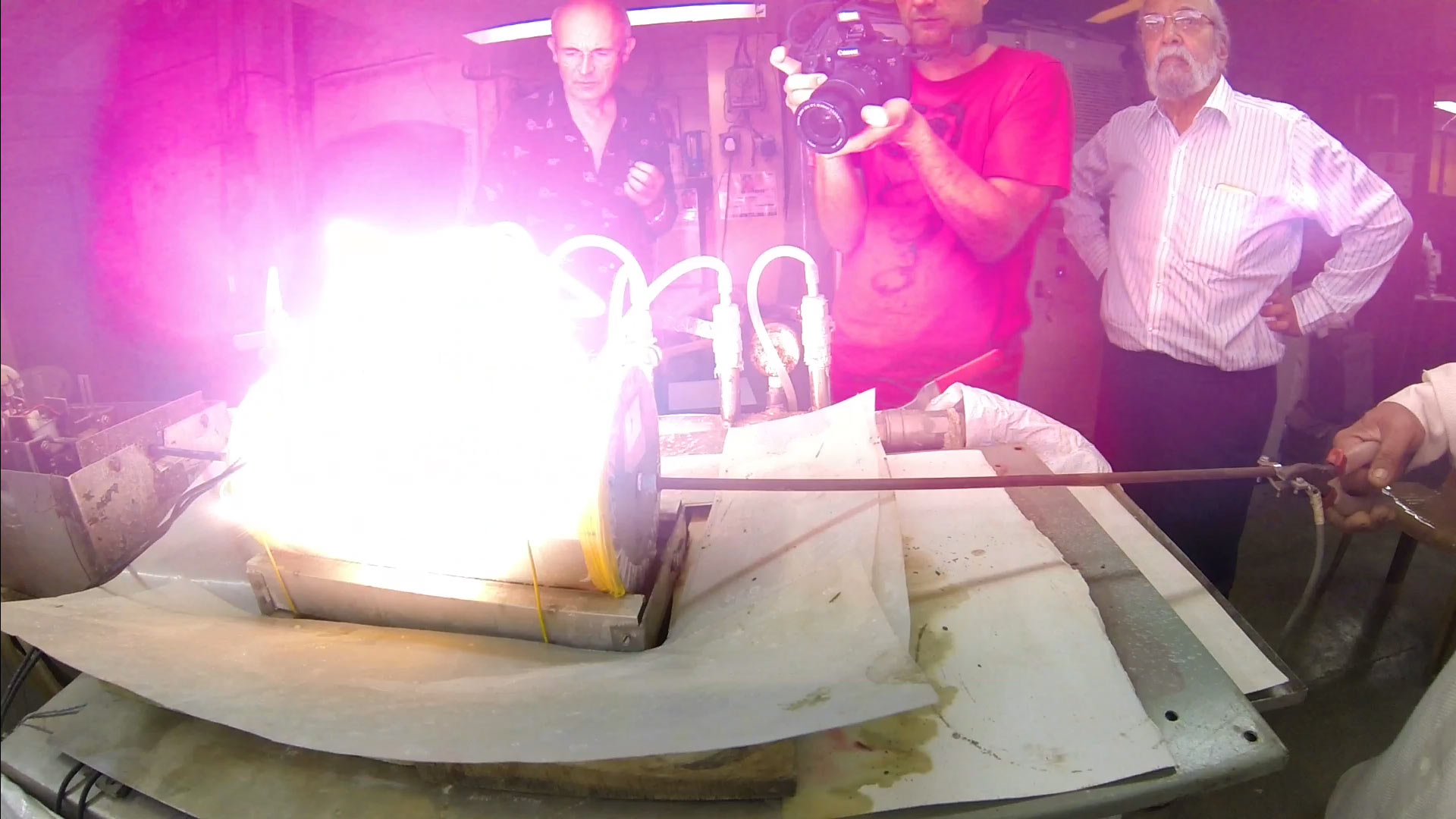 Having seen one such event, we inquired if Suhas Ralkar was concerned about hydrogen related explosions and he said no with confidence, so we continued without further consideration other than to try and find the events on camera later. Below is a gif animation sequences from 3 different cameras of the same event.

You can see that the flash seems to initiate towards the right third of the reactor, fills the frame and then the entire vessel becomes extremely bright, illuminating the room followed by a tail off in the direction of the camera. Water ejects horizontally at high speed indicating that there has been a rapid increase in pressure. Interestingly, the water foam does not appear to change much if at all.

You can see that steam was ejected from the holes in the top of the clear plastic containment vessel.

The second camera shot confirms the observations of the first with a little more close detail, you can even observe water being ejected from the hole through which the steel rod passes.

What could it be?

One obvious possibility is that it could be a HHO (Brown's Gas) explosion, the flame speed for HHO combustion is extremely fast and the audio could be considered similar. Below are two examples from YouTube researchers. 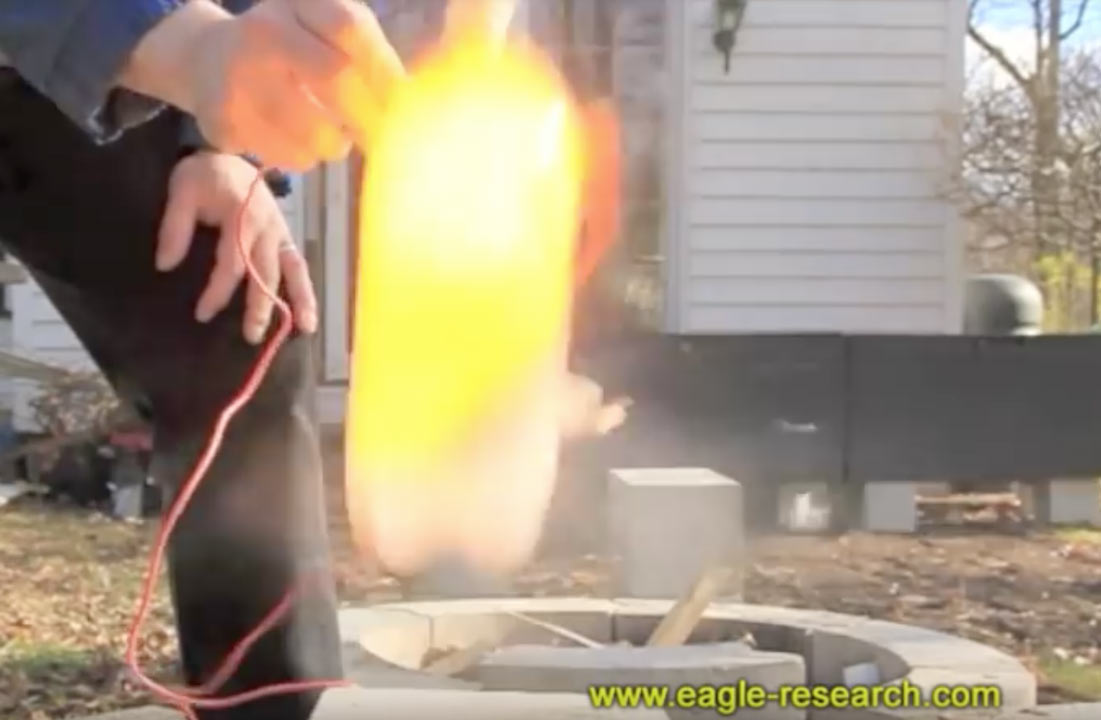 In both of the above cases, there is a yellow component to the flame, in the case of the 'sparks' reactor, the electrolyte is actually sodium bicarbonate, so one would expect a yellow flame, in fact, in the bulk of the discharges there is - however in the first image above, you can see that the glow out of the saturated area appears to be red purple. Could this be an artefact of the GoPro Hero 3s optics?

The colour is not as strange a thing however as what appears to be going on in the Ricoh Theta S spherical shot.

In the spherical image sequence below, taken with a camera operating at half the frame rate as the other cameras, the light appears to move down the length of the lab, away from the reactor and in the direction of the metal rod grounding.

In the first lit frame, Dr. Egely is lit, as is Bob Greenyers' right side, Suhas Ralkar is in shadow, the rod operator and other technician are lit from the front.

In the second lit frame, Dr. Egely is in shadow, Bob Greenyer is lit more on the left side, Suhas becomes lit and the rod operator and other technician are lit more on their right. All the other cameras and observers are looking at the device and would never have noticed this even if they could perceive it in the extremely short time frame. It appears as if there is a light field travelling down the lab length away from the reactor and through the roof. The optics of the Theta camera are split exactly left and right of the centre of the lab - so both of the cameras sensors are observing the same phenomenon and exposure compensation would not seam to explain it either.

Is this a light shower?

After consideration, we feel it is due to the 'flash' being split across two partial image frame scans, that is to say, that the sample scan of the light incident on the Thetas sensor first captures a partial frame close to the reactor and then away from the reactor. The big tell is that the shadow on the ceiling from the BubbleTech Neutron detectors does not shift.

Gif animations can be downloaded from here

Thanks for sharing, Brown Gas possible
Take a look at the color from 3:11 on

Thanks Nick, one has to admit it is a strong candidate - however, given that there are literally 100s sparks a second how does it even get the chance to build up?

You may need to download the gifs from the link at the bottom as they are quite large.

The Pictures arge impressive, first I am happy that there are holes and the pressure is released there. And not on a other way. The reaction looks slow for me. Like a Sin curve. I agree the reaction was over water. To les water movement for a reaction under water. I wouldn't go as far to say a plasma discharge. But I really don't know.

We have water, we have anode, cathode and Charge. Brown Gas is not so far away under that conditions. That is an assumption.

A lot of new stuff to think about it. All the best for tomorrow!
You make a puzzle peace by peace. And sometimes you go one step back to se a bigger picture. Come back with the most possible knowledge, what ever it is. Every outcome will be a positive outcome, when you look back in a view weeks. What ever the next 2 days brings.

Again a lot off lessons to learn.

The light source must be producing coherent light...laser light. An ordinary light cannot be broadcast in a narrow beam.

Possible similar flashes observed by open researcher 'CAN' in a very much simpler configuration.