Oddball Geological Features: Part 2 – The Sailing Stones of the Playa

It would appear finding odd geological features to discuss is a bit more difficult than I originally thought, but not due to a lack of examples. There are actually far too many to choose from! The more I learn about our planet and solar system, the more intrigued I become. They are a constant source of new and fresh knowledge, that inspire the inner scientist in everyone. In my last post, I wrote about the peculiar and stunning Chocolate Hills of Bohol. In this post, I’ll be discussing a geological feature that is far less significant, but had most geologists scratching their heads upon first studying it. 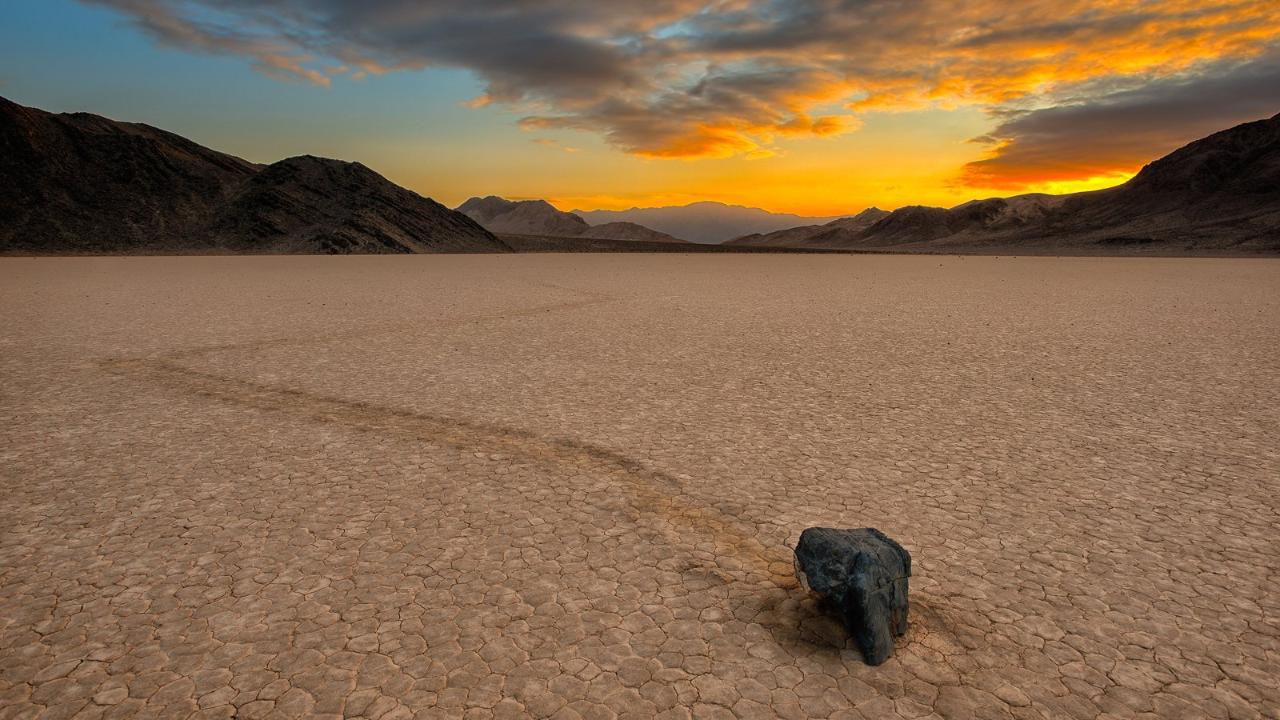 This image displays a sailing rock on the Race Track Playa in Death Valley National Park. Note the windy trail behind the rock. [Image Source]

In the middle of the Death Valley National Park in California on the Race Track Playa there’s an unusual geological event taking place. In a region that is generally destitute of flora or fauna, the rocks would appear to have come to life and proceeded to take a stroll around the park. Originally discovered in 1915 by a prospector named Joseph Crook, stories of these mysterious rocks reached the ears of geologists around the country. It wasn’t until 1948 when two geologists named Jim McAllister and Allen Agnew, decided to see what all the buzz was about while mapping the bedrock of the area. They concluded strong gusts of wind moved the rocks; specifically, when the floor of the playa was muddy. This explanation wasn’t sufficient enough for some geologists, which sparked an investigation that would last for over half a century. Satellite imagery of the Racetrack Playa in Death Valley National Park. Note the surrounding mountains and alluvial fans, which have marks of water erosion. [Image Source]

For starters, let’s discuss what a playa actually is. A playa is a very flat desert basin with little to no vegetation, that occasionally fills with water. They are also called an alkali flat, sabkha, dry lake or endorheic basin. In the case of the Race Track Playa in Death Valley, the basin fills with thin layer of water every late summer and winter from the runoff rains of the surrounding mountains. Along with the runoff water, a thin layer of mud fills the cracks between the hexagonal mud cracked polygons. While the event that is taking place there may seem to be an isolated case, it was discovered this phenomenon occurs at other playas as well (e.g. Little Bonnie Claire Playa in Nevada). This helped conspiracy theorists rule out the possibility that there were mysterious forces at work.

So why does this geological phenomenon occur? In the winter time, the thin layer of water covering the playa has a chance to freeze overnight. The following day, heat from the Sun begins to melt the thin layer of ice. When this occurs, high speed winds cause the ice floes to move in the windward direction (an effect known as ice shove, which occurs on the Great Lakes), carrying the rocks with them. Typically, the size of the rocks range from 15 to 46 cm (6 to 18 in) wide, which leave tracks behind them that are often 100 m (330 ft) long, roughly 8 to 30 cm (3 to 12 in) wide and usually less than 2.5 cm (1 in) deep. The rocks themselves originate from outcrops from the surrounding mountains of the playa, which are identified as syenite, dolomite and black dolomite. 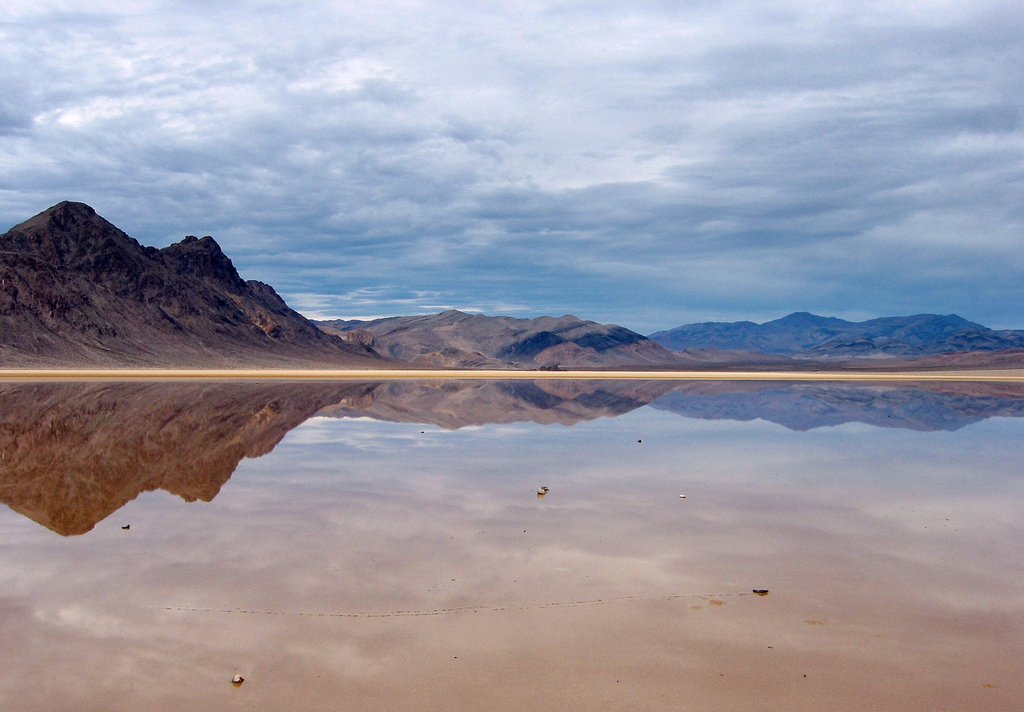 Stunning image of the Racetrack Playa in Death Valley National Park when it is flooded with the seasonal runoff rains from the mountainsides. [Image Source]

So the following conditions are required for these rocks to move:

As I mentioned earlier, it took over half a century for this theory to be proven. It wasn’t until August 2014, that a timelapse video documented all the proper conditions taking place at the same time. The video caught the rocks moving with the ice shove, proving the theory to be correct. The timelapse of this geological event occurring can be viewed here. This is a great image displaying the hexagonal polygon cracked shapes in the mud that typically occur when heat in the basin reaches 120 degrees Fahrenheit (48.8 degrees celsius). [Image Source]

Unfortunately, there aren’t any legends about this particular geological feature, but I think the chronological study of the event is pretty epic, in and of itself. One thing is for sure, the sailing stones of the playas are sure to impress any unsuspecting traveller who is clueless as to why the rocks appear to be moving. Good thing for you, that won't be a problem anymore! If you enjoyed my post, be sure to check out my blog from time to time. I intend on publishing posts such as these on a daily basis– as long as my busy life will allow it.

Your post has been personally reviewed and was considered to be a well written high quality article!
You received a 50% upvote since you are not yet a member of geopolis.
To read more about us and what we do, click here.
https://steemit.com/introduceyourself/@geopolis/introducing-geopolis-the-community-for-global-sciences
If you do not want us to upvote and comment on your posts concerning earth and earth sciences, please reply stop to this comment and we will no longer bother you with our love ❤️

How wild! Great information here. Going to have to tune in for more random, cool facts! Thank you

I'm glad you found the post to be informative. There are so many things I want to talk about, but I have only so much time, lol. Thanks for the follow!

I enjoy cool strange happenings on our planet.

Super cool, I'd never even heard of this before!

This place goes on my bucket list for places to go visit. Who would have taught rocks would spark such a big interest in the science community? lol

It is amazing sometimes to see nature at work. Nothing like it. :)

Amazing post, very detailed, you can see you put a lot of effort in writing it. :)

Thank you for sharing. Have a great day. :)

Haha. I’m glad you enjoyed it. Eventually I think I’m going to branch out into other topics, but I love geology!

I have always known that there was the phenomenon going on but didn't know what made it that way. Haha, thanks for confirming how the rocks move. :D Fascinating.

No problem! I'm glad you enjoyed it.

The @OriginalWorks bot has determined this post by @keephy to be original material and upvoted it!


Please note that this is a BETA version. Feel free to leave a reply if you feel this is an error to help improve accuracy.
$0.00
Reply
[-]
onethousandwords (54) 4 years ago

I've heard of these. I've always wanted to see it. Thanks for the explanation.