As someone who is still trying to get up to speed on the whole Cryptocurrency space, I wanted to share some of the things that I’ve been learning about Ripple. 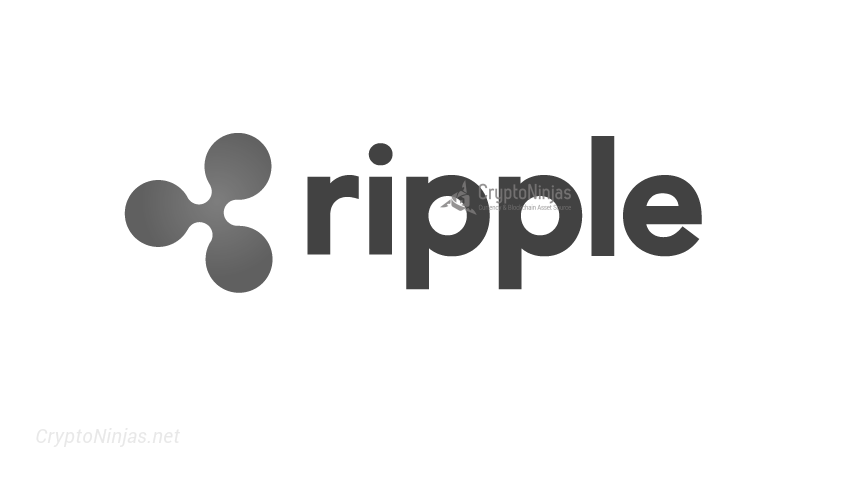 What do we know about Ripple? Here is what googling on the internet produced. Note, I’m sure most of you who have been watching CNBC, MSNC, Money, and all other media channels already know about Ripple but to those that have been living under a rock, like myself (and those who are not in the know)….

Question: What is Ripple?

Summary:
• Ripple is a company that was founded in 2012 to facilitate global financial transactions.
• It differentiates itself from other digital currency platforms by its connections to legitimate banks.
• Companies that use the Ripple platform are some of the world’s largest financial institutions: Santander, Bank of America, UBS, American Express.
• Ripple produces a obscure cryptocurrency, also known as XRP, and is now worth about $2.60 with a market cap of more than $100M, according to coinmarketcap. In early December it was trading at 25 cents.
• What is different about Ripple is its supply is largely controlled by just one company (Ripple), hence it is not decentralized like other cryptocurrencies.
• Unlike Bitcoin, Ripple isn’t mined or created, buy users. The company has control over the supply. – This is KEY FACTOR....and can be a huge risk to any investor.
• It had created 100 billion Ripple coins (XRP) initially ad 38 billion of them are in circulation at the moment.
• Ripple management can release up to 1 billion XRP coins per month, which some say can oversaturate the market (e.g. making them less valuable) – this is KEY FACTOR and can be a huge risk to investors.
• “Its somewhat concerning for me because if they chose to release them as quickly as possible, within a little over four years, you’d see more than a doubling of supply of Ripple. – And that could put pressure on XRP’s price.”
• “Some of the newer market participants are fully appreciating the potential for inflation” – which is often the precursor of a recession.
• Cross-border payments that can take hours with Bitcoin or DAYS with traditional financial transactions can go through in a matter of seconds with Ripple. 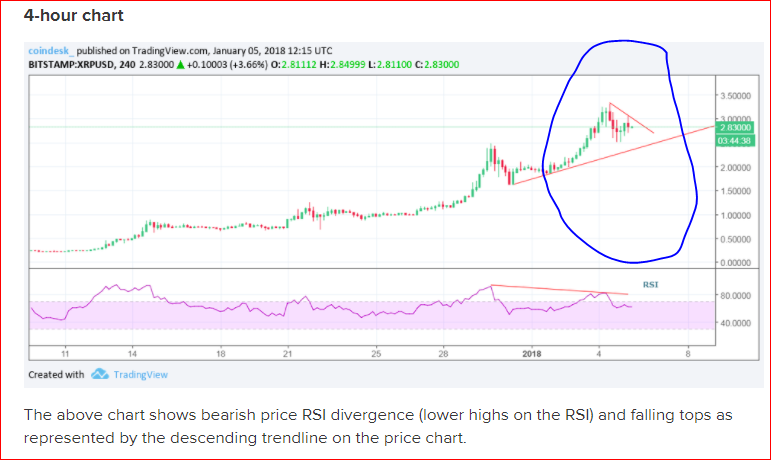 Ripple has surged over the last month +3800% going from 25 cents to as high as $3.50 before correcting and stabilizing at $2.60. Its a price action that has garnered tons of press.

Ripple’s Value Proposition: It’s a substitute for the traditional banking system. It offers a way for a bank or any financial institution to transfer funds in minutes instead of days. And does it at a lower fee. The traditional way includes SWIFT, which is how most financial institutions wire funds between entities / custodians/ banks/ financial intermediaries. As an investment professional whenever you transacted a security, it has a several day settlement process (for example, wiring USD and EUR between banks takes 3 days to settle the transaction).

Q; Can Ripple replace the way banks transact?
A: I think so. Atleast the 100 financial institutions that are currently implementing Ripple believes that it could potentially replace SWIFT or offer an alternative to SWIFT.

I’m not going to draw any conclusions yet, but I’ll wait to the end of my analysis to make that determination. Stay tuned.

Reply (with a good comment) and Upvote and I'll return the favor! I need Feedback!

this is a topic worth discussing about, thanks @epan35 for providing the platform,

Recently, ripples have being making so much waves, it got to a point that i was almost tempted to invest

but on running some preliminary background, i found some information, which bothered me, i will discuss them below and expect feedback on your opinion as well as your other followers

as i am aware, most network creators usually only keep a fraction of the tokens for themselves, pre-selling the rest to anyone that wishes to buy some. Ripple, however, still owns about 60% of the initially issued tokens.

i find this troubling and here is my reason

The company could try cashing out and potentially crash the market. It is very unlikely though, however. one must consider all possibilities

Also, since the network fees are paid through ‘burning’ XRPs, they essentially enrich everyone in proportion to the amount of XRPs they hold (if 1% of the tokens got burned, the remaining tokens would be worth about 1% more provided the market doesn’t change). This means Ripple Labs is essentially earning 60% of all network fees on the network. This probably doesn’t amount to much at the current time, but it may be more important in the future.

Lastly, the amount of XRPs owned by one company gives it a negative reputation. A lot of people in the crypto space dismiss Ripple outright as a ‘pre-mined scamcoin’ just because of a number of coins owned by Ripple.

The founders of Ripple, Jed McCaleb, Chris Larsen and Arthur Britto, gave themselves 20bn XRPs early on. This later came to bite Ripple. McCaleb left the team to start his own version of Ripple called Stellar, and decided to sell his XRP stash, resulting in a legal kerfuffle, a settlement and a schedule for how those coins may be sold.

If those numbers are correct, McCaleb is still cashing out $20,000 per week, and come 2019, he will be able to cash out 750m XRP (worth ~$256m at today’s price of $0.34 USD/XRP). Not an ideal situation if the money from your network will be going to a former employee and building your direct competitor to the tune of a quarter of billion dollars.

i have my reservations, but i would like to hear more from other crypto gurus

Some great points @charles92! I think you highlight some of the issues that exist with Ripple. The conflict of interest is a huge glaring one. Not sure how one can really get over the fact that they can issue new XRP whenever they want to. But it would be to their detriment as it will dilute their value. The fall out from the founders aside, which I think is valid enough to avoid investing but I think XRP does offer some glimpse into a new world of cross border transactions. I would be comfortable investing (a small portion) into the fact that the company could offer a compelling new way of transacting. Part of my rationale (and I admit is not a good one) is FOMO. But that's my two cents.

You make a good point too @epan35, if anything goes wrong, it will be to their detriment and such bad reputation is not good for business, i can also see the broad prospects of the coin, so i can fully concur with your rationale being FOMO

i know there is nothing without risks in business, i hope this pays out well for you
💗👍

Thanks for the post. I picked up some XRP near $2 today... we shall see how it goes!

Nice good pick up I think- I luckily got some money in at .24 and .48 and .84 and 2.25 and last of all took a huge chance and did a healthy buy in at 2.90 thinking the next day it will hit coin square and see a nice double up.... sadly a few hours later Coinbase made a real announcement about not adding any new coins, until their investigation is over. So thats my stomach turning investment. Im very thankful I got in early, I am still up; but only by $400. It really killed my portfolio when Coinmarketcap took 20B off the table. I still think there is some fishy stuff going on. I feel like a lot of these whales are shorting the market to re buy back in. Interested to see what the future holds for crypto. Crazy we are in time of currency changing. So many revolutionary projects and technologies in our time, its amazing to see.

I hear ripples is something to hold on to these days

Thanks @Mikeycolon. Appreciate your feedback.

Also, it is fair to note that the current market cap of XRP is based on the circulating 38B XRP, if we add the other coins, the valuation is whopping 250 - 300B. This is insane in my opinion, but to be fair it solves a great problem in the banking industry.

Completely agree. XRP offers a solution that is more closer to a company fundamental than pure speculation. However XRP is more so than other ICO are susceptible to manipulation and inflation (dilution). I think it makes sense to own some but not a lot. Its already at the upper end of what its worth. But I'm still researching this space. Thanks for the feedback!

I want to know how XRP will be implemented in the future. More so where the damn price is going. I have not seen any crazy news come out yet. There have been no major announcements from any specific partnerships. I hope some news comes out soon.
Does anyone have any info ?

hard to say where XRP will go. I think it potentially could go up higher but its already at the upper end of what its worth. At $116B, its marketcap is ridiculously high. In terms of news, I think there the closes I've seen that has a good pulse is Hacked.com (but you have to pay $39/month to get their news feed. Its pretty good. I've been reluctant to drop 39/month but who knows maybe worth it at some point.

I agree, I feel the market cap for XRP is overpriced at the moment. I do think though that if the entire market cap can catch say 5% of the worlds currency, then seeing XRP at 5-800b market cap is possible. Thats all in theory and if it continues to grow at the current rate with the rest of the market. I do hope to hear some announcements soon about companies adapting ripple and HOPEFULLY using XRP lol So many hopes. Really anything is possible. I really think if XRP can get into a major exchange in USA (Coinbase) or say even Canadas coin square, there would be a nice growth. The general public does not have a trading account, because of the difficulty. Imagine how quick money will be poured in, on the fear of missing out alone. Not to mention, it will be the lowest coin for now to be added, which would make people jump on price alone. HODLing and hunting daily for any updates. I can't imagine how people are feeling daily with 100k+ invested.

Very good post, I have learned a lot. Thank you so mush.