We spent much of our weekends at home relaxing and watching TV since the weather in Kota Kinabalu is smoldering hot lately for an outdoor activities.

A few days ago, @danieldoughty had subscribed Netflix for a trial period. We’ve decided to watch Will Smith’s recent movie with Netflix “Bright”. Directed by David Ayer (the same guy directed the Suicide Squad), Bright is a sci-fi fantasy crime film where humans live side by side with Orcs, Elves and fairies. Will Smith played as a Los Angeles policeman named Daryl Ward. He has a partner, an Orcs known as Nick Jakoby played by Joel Edgerton.

Ward and Jakoby work as a policemen under the Los Angeles Police Department. Being the first Orcish policeman, Ward did not fond of Jakoby as a partner. Apparently, Jakoby had let an orc, who shot Ward and was nearly killed, get away. Ward thought that as an orc, Jakoby had betrayed him due to racial loyalties.

At work, Jakoby is also facing racism from other colleagues who wants him removed from the force. While in the dressing room, Jakoby accidentally heard Ward's conversation with the rest how they wanted Jakoby out from the team.

An Internal Affairs has visited Ward wanting him to secretly record a confession from Jakoby that he intentionally let go the shooter away. On the same day, Ward and Jakoby responding a call to check a house at Abrams Street. When they reached to the site, they had a shoot-out with unknown shooter, killed him and head inside the house. To their surprise, they found more bodies, burnt and saw a she-elf with half body embedded in a wall. After confirmed magics has been used inside the house, Ward calls in to report. They found another elf, Tikka trying to run away with a magic wand. When they finally caught her, Tikka told them that only Bright can hold the magic wand. The wand possess a nuclear power that grant wishes. However, if a non-bright holds the wand, their body will explode. 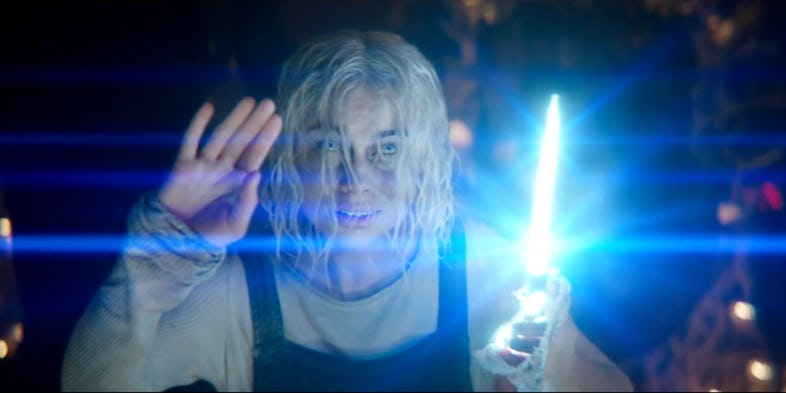 Tikka with the magic wand

Tikka, a former member of the Inferni group has escaped with the magic wand from Leilah, another elf from Inferni and also the master of the magic wand. Tikka was worried that Leilah would use the wand to resurrect the Dark Lord and take over the world. Ward, Jakoby and Tikka worked together to stop Leilah from getting the wand back. Leilah - A powerful and most dangerous Inferni's leader

In the final battle between Ward andJakoby with Leilah, Ward found out that he is a Bright, one out of 99% possibilities. Using the wand and a spell - given by Tikka, Ward finally kills Leilah.

As a fan of Will Smith, Bright is actually not bad for a weekend movie. He’s character is funny and bold. The scripts are understandable. Edgerton is too hot to be an Orc 😄 and he plays his character very well too. Thumbs up to Edgerton.

I didn't know why this movie received so many bad reviews and become Netflix’s First Blockbuster Is the Worst Movie of 2017.

The only problem is the ending. Yes, we know that Ward is in fact a Bright. But what happened to the rest of the Inferni’s members? What happened to wand? I was hoping to see Will Smith do the ‘abacadabra Harry Porter’ thing and hunt down the rest of the Inferni. Some sort of like The Sorcerer's Apprentice or Blade but without the fang and the cape.

Afterall, he can use the wand and make wishes, right? Or maybe Ward can work together with Kandomere, an elf who works with the Magic Task Force and hunt the remaining Inferni. Like Legolas and Aragorn 😝

I doubt there will be a sequel to this although I’m hoping there will be. Would love to see Will Smith kick some elves asses.

Check out the trailers below. And to those who have seen the movie, let me know what you think in the comment.

I really enjoyed this movie coming from the mind of Max landis whose movies ive all enjoyed like Chronicle (2012), American Ultra (2015), Victor Frankenstein (2015),

I liked the unique concept of integrating these beings who are usually depicted in ancient or medieval times and dropping them in a modern day setting. It also tackled topics like racism, segregation, culture and classism as well as the complexity of central law enforcement and throwing in some comic relief when needed

The only problem i really had with it was the ending i felt was a bit of an anticlimax and almost felt like it was trying to set itself up to sequel it didn't yet deserve.

Rather than letting the content and fans dictate if there should be a sequel, but overall enjoyable movie.

I agree. I would not complain so much about the movie because I really do enjoy watching it.

Yes, the ending is a bit disappointing. Probably, I didn't expect it will end that way. I don't know but I think Bright is more watchable compared to Hancock. Just my 2 cents.

Hi viverridae ,
I found an article with similar content here:
The smallest countries in the world!
This is because you likely copy and pasted some form of content --
whether it be your own or not. This is not an accusation of wrongdoing,
but merely an informative comment for the reader.

If you get repeated warnings we will start to flag all viverridae posts!

I beg to differ. None of the content above is copy paste. I will not even click the link given. Thank you for dropping your comment and I appreciate for your concern.