Beginners guide to staking with Reddcoin

Thanks to my earnings from posts here on Steemit, I have had some spare 'coin' to play around with. Having a growing interest in different cryptocurrencies I wanted to grab a bit of a few and get to grips with exchanges, wallets etc.

One coin I settled on is Reddcoin (no relation to reddit!).
This claims to be a 'Proof of Stake Velocity' algorithm, which also seems to have (in my experience) FREE transactions.

With Reddcoin, you stake by keeping your wallet unlocked (for staking) and having some RDD in your wallet. The wallet takes part in validating transactions on the network, this is how you earn your rewards.

The more RDD you have in your wallet, the more often you stake.

I grabbed the wallet download from the home page, though they have a redesigned one available too.

Installation was simple and painless, wallets are available for Windows 32 bit/ 64 bit, Mac and surprisingly Linux too.

You need some coin

After that it was a simple task of generating an address from the Request tab, then sending a small portion from Bittrex to my local wallet.

3 things need to be true before you can stake

It took 2 full days for my wallet to catch up, this is after I downloaded a file with some history in it.

I waited till it was caught up to send some coin, then unlocked my wallet for staking and got this screen; I grabbed a screen shot with the message, as you can see I had 1 and 2 in place, but the coins had to mature.

After my coins had matured I could see my weight vs the network weight, and realised with my paltry sum it would take weeks to get a stake in.

I found a handy tool that you can use to work this out before getting your own Reddcoin and wallet etc. Visit Reddcoin stake calculator and put an amount in to see how it goes.

So I left my wallet open on an old notebook running Ubuntu for 3 days, then got impatient, so sought an alternative.

I found that BTCPOP.co stakes with the coins in it's POS wallets and distributes the coin to the people who have a balance (minus a fee for maintaining the wallet)

Here's a banner, feel free to go direct to https://btcpop.co if you don't like referral links 🙃

So far this has turned out great, I started getting the staking rewards from the day I sent my coin there, generally there are a few rewards per day. This makes me think there are a few people on BTCPOP that have quite a bit of RDD in their wallets!

With staking you should get an average of around 5% per year, which matches up very closely with what I see on BTCPOP, meaning their fee is not high at all.

I am glad I moved my coin to BTCPOP, I think I would still be waiting to stake if I had kept it locally, added to which I would be paying electricity and fretting over whether the wallet was staking or not.

I am hopeful for a price increase in Reddcoin, it seems as if they have had developments 'in the works' for some time though, so we will wait and see.

I am posting what I managed to piece together, if you know more or spot a mistake, by all means leave a comment and let me know.

If you fell like leaving a 'tip' here is my Reddcoin address: RqxLTcygUHzLTbHrmBvAo5uyvJ7TM33Ftr

From your fine description, it looks like Reddcoin is as easy to stake as Pivx. User friendliness is really important in any coin!

PIVX is probably good. I gained a fair bit while staking 1776 Token, which is functionally similar to PIVX, but when I got my masternodes setup the rate of masternode rewards was hugely greater than the staking had been. However, while staking with a tenth of my previous balance, the staking successes have been maybe 99% less! ... With time the masternodes also should reduce, as other people set them up too. You can checkout 1776 Token at the following address. We should be listing on exchanges a few days into April, I think. https://www.freedom.social/p-1776principles

Oh, I just realised that I replied to a fairly old post. Yes, PIVX has grown nicely over the past 5 months. 1776 Token is at that early stage now, but there is a marketplace where you can advertise freely items or services for sale for 1776 Token. Also there is the Freedom.social forum, not quite as neat as this Steemit forum, but it's about to get a rewrite! :)

good idea.. and good luck for other posts.
continue @shaunmza
i resteem and follow you

thanks for the info @shaunmza ... will check this RDD out. i've got a few spare coins on Poloniex and its not doing much these days with the markets moving at slow pace

Cool stuff, if you do buy RDD and don't want to set up a wallet locally, I recommend sending it to BTCPOP, even a small amount should get you some return. Much better then leaving it on an exchange not growing a all!

seems like the caution against leaving your coin on an exchange would also apply to leaving it on a site like btcpop. Bottom line if you don't control it, someone else does.

Absolutely true, but if you are willing to accept that risk, then it does simplify the staking process.

I hold some RDD in about 2 months . any idea about that my friend, what do you think, should i take quick profit or waiting for long term , thanks

I guess I am more a buy and hold kind of person. Depending on what you paid you may be able to sell enough to cover your investment and still have some coins?

I got lucky on Exclusive coin, it went up after I bought, so I cashed out my initial investment and I still have, essentially free, coins.

got your idea. will play like this in future , will cover my seed amount by selling them in high and keep the rest for future profit. can be low or high. but do not going to lose the game . cheers buddy, thanks for your kind advice

I've heard that reddcoin may eventually pose some form of competition to steemit..because it allows users to pay people for content on other websites..guess it's always useful to diversify risk and potential :)

It sure does pay to diversify.

I am not sure how much it will in terms of competition, maybe more of a different way to reward content.

I see Reddcoin more as a tipping coin.

that's true..it does function primarily as a tipping coin for other social media sites. I got me some in the low these past few days hehe

So what is the rate of return? 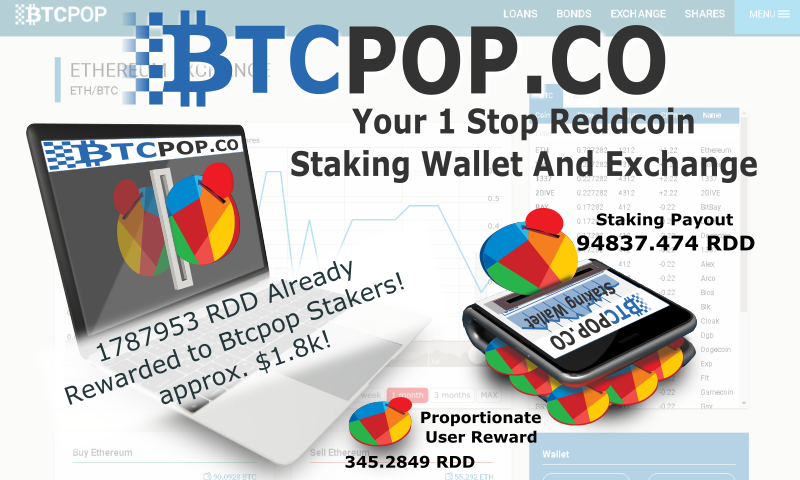 Hey guys! Just wanted to share this. You can Earn while you Trade or Hodl at Btcpop.co!

thank you for the information, i didn't know what Reddcoins do as i have it in a non staking wallet. I will move them once the blockchain of the official wallet has been completed

Great article, learnt quite a bit here as I just started staking this locally. May send them over to BTCPOP..

Thanks. So much information! Hope meanwhile it is easier to get hold of some reddcoins. For a nontechy it is hard to understand. The whole idea of reddcoin is graet.

Now is best time to buy RDD and stake away :D Nice post!

When staking, how much should I' be putting into the wallets my full reddcoin balance or just a few? 5 % of a few coins doesn't seem worthwhile...am I' missing something?

I've had the wallet staking for over a week and no coins from staking :(

Yes it's unlocked and it says staking.

amazing detail, ive been looking for coins to stake for a while now and reddcoin is still cheap to get into with good potential, after this post im going to be staking what ive got

Thanks for the article but I tried checking forums and reviews for BTCTPop and this is what I found...

Any personal issues or concerns you guys have experienced?

I had no issues with deposits or withdrawals.

That thread is from before the new owner took over.

so what's your tip(s) on how we can maximize BTCPop, will be appreciated?
Which option are you into, I saw lots of stuff inside it and one of them is lending... I'm quite hesitant, perhaps you are familiar with what happened to bitconnect and usitech?

Solid blog. Really appreciate you bring this to our attention. The popularity of the cryptos is currently determined by the biggest group of uneducated investors in man kind. It's an interesting world we live in. An interesting website I found: https://www.coincheckup.com This site gives a complete analysis and investment stats on every single tradable crypto out there.

Reddcoin has been added to StakeUnited. Staking in a large pool enables you to get stakes much sooner than by yourself. No minimum to stake, you will get stakes daily. This allows you to compound your earnings much faster. You don't need to need to do coin merges or have a computer running 24/7. All this for a 3% fee on the stake. It's well worth it, check it out at: https://stakeunited.com/Naz

Poolstaking is where it is at! BTCPOP is the best I've found out there with many coins to stake.

Thanks for the info! I'm looking for a staking pool for my RDD, are you still using BTCPop? I'm not totally sure if its safe to stake there, I've seen so many complaints that overwhealms the good comments. I cant have my computer on for so long, so stake pool is my only hope

Thanks for the information. I've only got $100 worth of RDD at the moment so it's probably not worth trying to stake it. But I'll keep it in mind if I get more in the future.

So whats the update for BTCPOP and stakeunited? Any issues faced? I tried opening the stake calculator but its not working for me. What is the minimum balance required to stake every other day?

Thank you about the shared share, real good for we add the reddcoin for the copper coin.

BTCPOP charges 2% for staking, which is about half of the expected revenue generated.

IMHO a Raspberry Pi would be best. Costs around $35 + low power consumption + you keep full control over your wallet.

Pool staking is tempting but there is a high risk you lose all your REDDs if the pool happens to disappear or get hacked!

Hey Guys. I found this guide for top RDD staking. I think you should check it out.
http://topstaking.com/rdd/

Check out my list of Staking Pools / Faucets / Exchanges for RDD | Reddcoin @topstaking or https://topstaking.com/rdd/

Thanks!!!
I was looking for some clarification to the stake process.
The download took ages to bring the wallet up to date. Hoping to stake them on my home computer . Unfortunately looks like you need quite a bit of reddcoin to get decent stake rewards.

Sometimes it's good to read something totally out of your comfort zone. I read this and had to Google a few terms! I recently did my first Steemit article on equity release. It's a great platform and I'm enjoying the diversity of content.

I am staking for 1 month. Right now i should be rewarded every 16 days. Do i need to lock the wallet and wait for 16 days to get reward or i need to leave it open, unlocked ?