Broward Sheriff Scott Israel pictured with Hillary Clinton. The old saying a picture's worth a thousand words comes to mind. 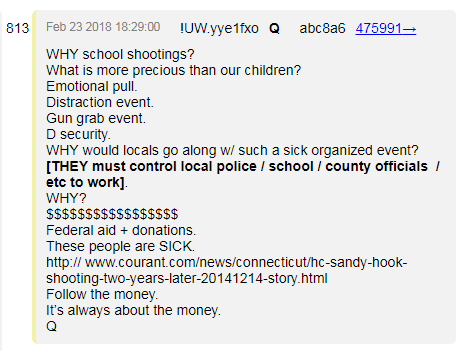 Distraction event from the fact the Russian collusion investigation is going nowhere? The shooting events are security for the democrats and could be seen as donation events as the tend to pull in big money from liberals. I think q is referring to Trump and good guys in Washington that leaked this story. Voices in his head sounds like Cruz might of been an MK Ultra pawn. 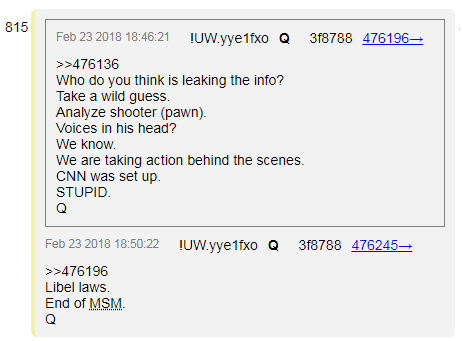 Is something big going to come out of this shooting that's going to destroy CNN's credibility forever? Maybe information on what CNN is doing behind the sense to coach these kids or paying them to say what they're saying? I'm interested to see how this is going to play out. How to delegate SP video: https://steemit.com/informationwar/@truthforce/dsukmik2

Thank you for covering Q. I've been watching him since late December, with his "coincidence" comment about Eric Schmidt (He fits perfectly the phenotype of a child rapist, up to and including his low-set ears). There is a storm coming!

Is anyone really surprised. Funny that the school is in wasserman's district.

What is Q anon? I was thinking the other day, how it always seems to be one big event at a time. North Korea, then shootings, Russia, when something new comes along, they completely forget the last thing and move on.

Q anon is a person or group of people posting on 4chan boards about Trump's plan to take down the deep state. Dr. Corsi(an expert in investigating government corruption) believes Q is a person(s) with a background in military intelligence that may be connected to the Trump administration. Q is leaking information to mobilize the Anonymous on 4chan into taking action by blasting the social media sites with the truth and getting the public ready for the arrests and shocking news Trump is about to drop on the public.

Political wars gonna give bad results for the common people. The political parties should keep aside their differences and think about the future of America.

@mmasim , this is not two political parties fighting. This is the American people and the military fighting against the corrupt, two-party duopoly, and against the corrupt intelligence community who are run by foreign corporate interests. Go back and listen to interviews between Hamid Gul and Alex Jones for a good start on your studies

Curated for #informationwar (by @truthforce)
Relevance: QAnon
Our Purpose