What is education. In simple words, this is a system of rules that helps us communicate harmoniously with other people. This is a kind of unification of the visions of life, because if there is something certain in this world, it is that two people do not see life in the same way. When it comes to relationships, we can be objective, or at least try to be, only when we are not involved in the situation. Let us be convinced that we can not be objective and at least try to build a polygonal point of view. To be acceptable to others, we are trying to be objectivistic (ie to have a polygonal point of view), and at the same time we try to realize ourselves (that is, to achieve ourselves), and that is extremely subjective . It is a kind of interpersonal war between the individual and the common; between the objective and the subjective. A war that annoys a man in his time of carelessness, calmness and irresponsibility to life. This is where the upbringing takes place. When it is missing the conflict is a non-stop person. And in the soul of man, in the case of characters, and between personalities. In our case, three grown-up girls, their brother and wife are at the center of such a war. Covered in the shadow of a Moscow - Dream. Let's look at this dream. This Moscow. Asylum from childhood. The world of "daddy" who died "just a year ago." A dream can only become an objective truth if you identify with it. But it can also swallow your mind to the point where the home you live in becomes a madhouse. Dreams should not become manic, because they devour the self to man. The three sisters, however, are in an extremely difficult situation, which should only have caused regret. It is not enough that they are personified with their dreams, but they are constantly throwing obstacles in front of them and thus destroying the situation that they maintain for a year. The situation, which they want to keep, however, at any cost, because it makes sense of such a dream. Still, it is not difficult to buy a train ticket and return to your hometown if you want it so much and you are not happy with the current way of life. In a city of military with the same familiar people and no perspective. They have built up their utopia of military battles since childhood and the constant, soothing presence of military uniforms. 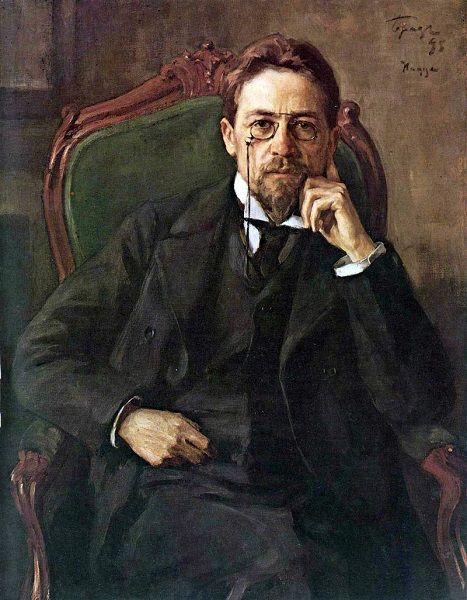 They want to repeat a whole world, the world of childhood, but now there is no center of balance, and that's the father. In the whole female cacophony in this house - pub, barracks there is another man. This is the brother. He did not become the next point of reference and center of equilibrium, but in an obedient pussy, the only pragmatic, to some extent with a clear judgment, Natasha. He has no choice but to try to integrate into siblings who are constantly looking for replacements for the dad, but they do not find them among the aging and obese company of military. The ability to integrate is directly related to the ability to control events in your life. This is the privilege of every kid, every guy and idiot. The pleasure of someone else being responsible for you, provided of course you have a good life. This is the qualitative purism of this family of three sisters and one brother. Their failure to grow. This is the psychological gesture that penetrates the behavior of these people from the first replica to the very end. God. Who a normal person is dancing a waltz on the day his father died, and that very soon. These people have lost the picture of their lives. Although A.P. Chekhov is building a vision without a dramatic play. This play simultaneously says silently and does not speak speaking. The father is the absolute denial of the son and the total image for the sisters. The sisters deny any man who has a different view of the world. That's why they do not like their brother. In this case, Natasha does not do it unhappy, but the sisters are burdened with the desire to see her father in him. There are women who believe the man is good, but the circumstances are bad. They persistently attribute the troubles of their love life to the boyfriend's friends, to his childhood, to the parents, and even to the government. In Russia, they look at the Chekhov heroes - hearty people with lofty souls who suffer due to inappropriate circumstances. Often fathers confuse their daughters to a great extent. The first touch with a man is stored in the sensory memory of the girls. When they feel something similar to those sensations that the father of the little girl is causing, then the father can play a "defeating" role. Women become unpredictable and strange. In one case, they begin to avenge their fathers (and they do not know what). But the father is not innocent. He still wants the same influence on his daughter while she is looking for other men. Other authorities to lead her with imperatives because she is not taught and can not find herself in her own. This is about upbringing here. The sphere of rules that people communicate with each other. Because people's life is meaningful when we find and have meaning for other people around us. These are usually women deprived of the ability to communicate. They are interested in someone as much as he is involved in her personal situation. The example of the soldiers. We do not have the situation to follow them. The sadness of the impossible makes these girls nearer. The internal conflict of characters is expressed in how they mature maturity. As a transition from internal to external points of reference or as a point after which a person begins to break down. The brother is betrayed and deep inside suffers. His internal conflict is that he sees what is happening, but can not disagree with it. To understand "Three Sisters" is like understanding the Brownian movement (though it is invisible). It all depends on what we see and project on the characters. Exact as in life. This is the obvious sense of art that makes us come back to the conversation or not. Because speaking can not lead to conversation. Just like in "Three Sisters" Everyone can talk about the same thing, but that does not lead to conversation.

Absolutely!! Education plays a vital role in our life ! It makes best out of people

Congratulations @daydreaming, this post is the seventh most rewarded post (based on pending payouts) in the last 12 hours written by a Newbie account holder (accounts that hold between 0.01 and 0.1 Mega Vests). The total number of posts by newbie account holders during this period was 4026 and the total pending payments to posts in this category was $2398.73. To see the full list of highest paid posts across all accounts categories, click here.

@felixjasper copy your post without your permission :
The psychological gesture of the three sisters and the brother in "Three sisters" by Chekhov