procrastilearner (61)in #physics • 4 years ago (edited)

In this post I am going to attempt to explain in an intuitive sense the time dilation effect seen in Special Relativity. Let's see how it goes. 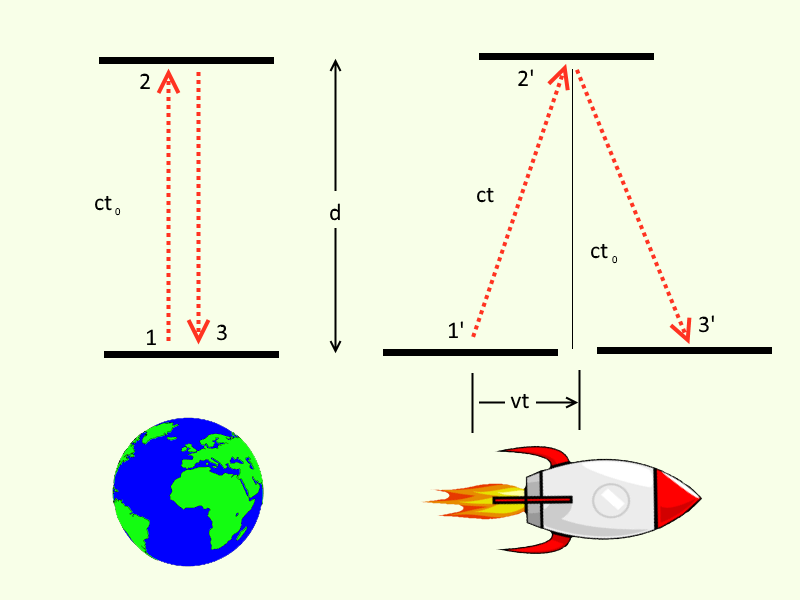 It could help to think of time as a 'system effect'. That is, time is not an absolute and it is not really like a river flowing from past to present.

It is better to think of time as particles communicating with one another and that communication is not instantaneous. In fact, we know that the communication cannot travel faster than the speed of light.

Looking at the figure above, the observer on the left is stationary. This observer has made a simple clock that sends a pulse of light up to a mirror and it reflects back down to a detector.

The speed that light moves is 'c', so the distance that the light pulse travels is velocity x time or 2ct0.

Again looking at the figure above, the observer on the right is in motion from left to right. This observer also has a simple clock that sends a pulse of light up to a mirror and it reflects back down to a detector.

It is obvious that this second pulse has to travel a farther distance than the pulse for the stationary observer.

Since the speed of light is a constant for all observers, this means that it takes a longer time to be detected.

The implications here are:

Okay, you may say, so what?

This is just a simple drawing and some simple Pythagorean math.

In fact it is more than just math, there is a massive amount of experimental evidence behind it. Here is one example.

The Muon Half Life The muon is a particle that is similar to the electron. It has an electric charge of −1 and a spin of 1/2 but with a much greater mass (about 207 times that of the electron).

The muon is unstable and decays into other particles. It has a half-life of about of 2.2 μs (microseconds) when measured at rest in the laboratory.

Here is the evidence for time dilation: Muons are created in the high atmosphere when cosmic rays strike the air.

When created they will have a speed of about 0.99 c.

In the next 650 m the remaining half would decay away and so on and so forth.

Since the upper atmosphere is something like 15 km or more from the ground this means almost no muons would survive to reach detectors at the surface of the Earth.

In fact detectors at the surface of the Earth are able to detect substantial levels of muons because time dilation is able to increase their effective half-life (to us stationary observers, to the muons themselves the half-life seems to stay the same).

I will go into the derivation of the Lorentz transformation equations in a later post.

Thanks for taking the time to read my post 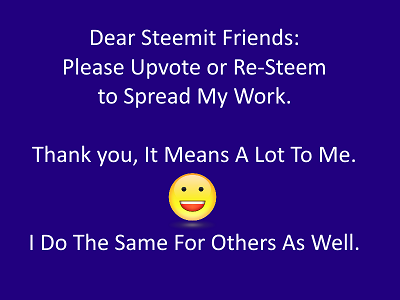 Some of my recent posts

Intuitive Special Relativity - What Is Time?

SpaceX and Lower Launch Costs Means We Will Be Getting A Rotating Space Station!

How Will The SpaceX Roadster Degrade Over Time?

You May Not Be A Human After All

It's a dog's breakfast up there really. Lot's of muons, neutrinos, pions and bog standard hadrons.

Cosmic rays are relativistic particles (mostly protons and light nuclei) that are produced by supernovae and other powerful sources in and beyond our galaxy. When a cosmic-ray particle collides with a molecule in Earth’s atmosphere, it generates a cascade of secondary particles. An incident proton, for example, will typically expend 40% of its energy producing a secondary proton or neutron, together with a large number of other hadrons, mostly pions. Neutral pions decay immediately to two photons that generate an electromagnetic “cascade” comprising electron-positron pairs and gamma rays. Charged pions with high energies interact again in the atmosphere. The neutral pions they produce contribute further to the electromagnetic component of the shower, while other particles carry energy forward to subsequent interactions. Lower-energy charged pions decay before interacting again and produce muons, which largely survive to the ground.