the village of Turkey in Banda Aceh 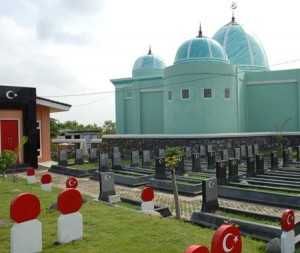 Good attention, is this scene in Turkey? Wrong. This is a burial area at the Bitai Mosque, Banda Aceh. This is the fact that shows the relationship between Banda Aceh and the Ottoman Ottoman Empire. Because in this place, many Turks (according to the records, there are 48 tombs of teachers, ustadz, also military officers) Ottoman Ottoman Empire who had served in Aceh. We know that to help train the paramilyat Aceh expel invaders, Ottoman Turks send assistance in the form material and non-material. Complete weapons with soldiers and coaches. Science is complete with its teachers and so on. Bitai is a village / kelurahan in Jaya Baru Sub-district, Banda Aceh. Before the Earthquake and Tsunami in the Indian Ocean December 26, 2004, the population numbered 1,580 inhabitants. From the results of the post-tsunami census, it is known that the total population is now 421 inhabitants (2005). According to the Indonesian News website, Bitai is the name of a settlement occupied by Islamic scholars of Pasai Pidie and the cleric came from Baitul Muqdis / Baital Maqdis (Palestine) Islam, Palestine belonged to the Ottoman Empire (formerly known as the Rum Empire). The kingdom of Rum succeeded in submission, the Eastern Roman Empire or Byzantine Empire (Byzantine, Byzantine) was a term used to describe the Roman Empire in the Middle Ages, around his capital in Constantinople or the Christian Empire which was successfully conquered by the Ottoman Caliph's Ottoman Empire. The victory of the Islamic army over Christian troops in the continent of Europe, the name of Constantinople City was changed to Istanbul. Islam in Bitai cell it is very advanced because many people outside of Aceh are learning to deepen the religion of Islam. Besides developing Islam, the heads of state also hold cooperation in the field of economy and trade and establish a good relationship on the problem of state resilience. Turkey contributes to help Aceh provide wars in the reign of Sri Sultan Salahuddin (the second Sultan of Aceh who died in 1548 AD, only reigned 28 years and three months). During his reign, Salahuddin worked with other countries such as Turkey, Malay lands, Pakistan and Saudi Arabia. that is, many Malay Muslims who are Moslems also migrate and marry Acehnese who live in Bitai. The Turkish man who first arrived in Bitai, Banda Aceh was named Muthalib Ghazi bin Mustafa Ghaz The Turkish man who first came to Bitai, Banda Aceh was named Muthalib Ghazi bin Mustafa Ghazi or better known as Tengku Syie h Tuan Di Bitai. The name Bitai was taken to commemorate the Turkish origin from Palestine or Bayt Al-Maqdis another name from Jerusalem where the Al-Aqsa Mosque is now occupied by Zionist Israel. At the time of King Salahuddin's death, the Turkish man who was his friend gave the will that at the time of death they ask to be buried near each other that is at Komplek Situs Makan Tuanku Di Bitai, Banda Aceh. The number of ancient tombs around the tomb of Sultan Salahuddin as a whole there are more 48. Overall tombstone in the form of octagonal and decoration inscribed with calligraphy Arabic. Eight squares embodies eight companions from Aceh, Turkey and Saudi Arabia. At the bottom of the gravestone there is a wide pattern of tumpal, the top of the convex headstone above it there is a circle of the eight sides. Tengku Di Bitai descendants are also buried around the tomb of Sultan Salahuddin in the wakaf land site and there is an ancient mosque made of wood and partly on its cement.Pasca Tsunami the ancient mosque was severely damaged and finally built a new mosque with Turkish-style Middle Eastern ornament motif and there is also a museum about the history of Turkish arrival in Bitai Banda Aceh. with an area of ​​500 square meters.