This is a little bit like cheating on my blog but i think the ColorChallenge is a fun idea and I wanted to contribute while also continuing to document my time in Alaska at Toolik Field Station. 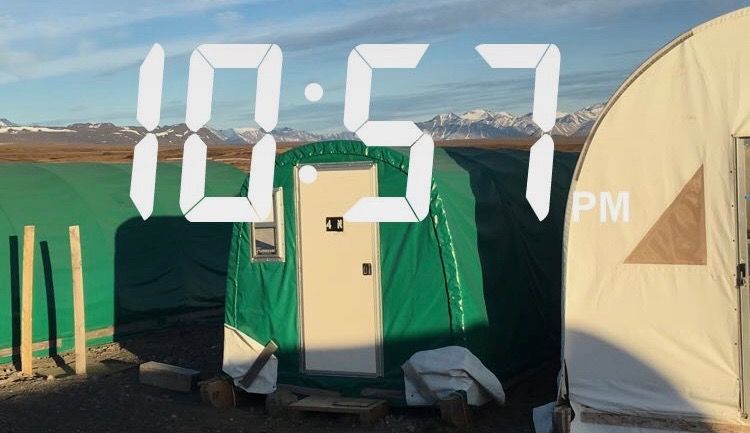 Despite having been taken on SnapChat, I think this is a valuable photo...

This photo shows three amazing points about my time in Alaska so far:

As a eluded to in the title that little tent is called a Weatherport. They are makeshift little cottages that fit one or two people comfortably. In my Weatherport, I have electricity, heat, a twin size bed, some drawers and a dresser. For being in the middle of nowhere, we are very spoiled.

It took a little getting used to, but until July 21, the sun will not be setting on Toolik Field Station. Above the arctic circle, which theoretically marks the southernmost point that experiences 24-hour sunlight on the Summer Solstice, areas experience "Polar Days" in the summer and "Polar Nights" in the winter. This Polar Day started May 5th when the sun rised (probably around 1 AM) and will continue until July 5th when it sets. While hard to get used to at first, the 24-hour day is energizing, and has provided a great reason to stay up late!

In the background you can see, as I can from the door of my Weatherport, the Brooks Range, colloquially: the Gates of the Arctic. The Brooks Range marks the beginning of the North Slope (Arctic Slope) which extends north to the Arctic Ocean and oil fields of Prudhoe Bay. The Brooks Range is a 700 mile long mountain range and reaches nearly 9,000 feet at its maximum height. The mountain range was formed 126 million years ago as a result of the terrane that is the northern slope splitting from modern-day Canada, jackknifing around, and colliding with what is just south of the range.

I hope this was an informative ColorChallenge, at worst. At best, I hope that this blog entry, as well as my old ones, inspire you to explore the world, and maybe even the Arctic! Climate science is very important, and it is never too late to get involved. If you are interested in exploring different areas of the world but don't have the means, I suggest you go into an area of Environmental Science.

Please check out my earlier entries about my trip:

Part 1: Before I left, a little overview
Part 2: Just after arriving, featuring some great Dalton Highway and Brooks Range pics

These photos are fabulous! I've always wanted to experience the 24 hours of sun thing. Some day...

Never too soon to go to Alaska... Like I said, up here at Toolik it'll be Sunny 24/7 for the next month! It is quite an experience.

@gardenlady Fun fact for people interested in gardening.. because Alaska gets the longest duration of sunlight/day in the USA summer, many plants will grow to be much much larger. For example, there are huge farms entirely dedicated to peonies. They are sustainable businesses, despite inactivity in the winter, because the peonies are in bloom for a larger portion of the summer than in other parts of the country and are so nice and big. They get shipped all over the country.

that is so cool! I notice that plants can be larger even in Maine, so that would be awesome to check out the flora in Alaska. And fruit! I bet they grow huuuge watermelon and canteloupe!!