Ode to Film - An Introduction to my camera collection 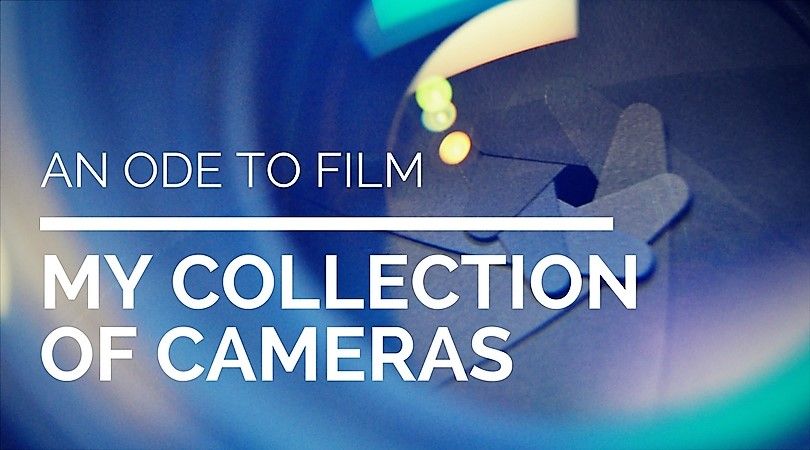 These days, some things can make me feel old. In terms of years lived, I’m relatively young. But, when my son tells me about a friend at school who’s mom “must have been born in the nineteens” I can’t help but tilt my head back in disbelief. I try to explain anyone over the age of eighteen was born in the “nineteens” … and start thinking that’s the first time I’ve heard someone use that term.

Once I got over the fact that being born in a past century is a thing these days, I thought of other things that make me feel old. Since joining Steemit, photography has been on my mind more often these days. My recent reflections on film photography certainly make me grasp the veteran nature of one of my deepest passions. Something integral to my growing up is now archaic.

So, you likely won’t be surprised when I tell you of my glee when I noticed a fellow Steemit photog post some film work. When I saw this post by @dbooster we started a little conversation about film photography. This got me nostalgic and birthed an idea: to share a collection of my film cameras on Steemit.

I’ve made one ode to film post already, which you can read here. In it, I share a little about the experience of using film and what it means to me. The post also features some photographs taken on a trip I took to New York City, alone, while in high-school. I wasn’t able to process and review those photos until I returned home to Alaska. No LCD screen on the back of that camera.

Speaking of “that camera” brings us to the subject at hand. I’ve shared what film means to me, now I’d like to introduce you to an old friend. This is what started it all. For my first high-school semester of photography I had to get a camera. There were the basic, recommended models, but when the man behind the counter at Stewart’s Photo in downtown Anchorage introduced me to the FE2, it clicked. I wasn’t going to settle for anything other than a Single Lens Reflex (SLR) body: simply put, a style of camera that allows you to view through the lens before taking the photo, rather than a separate view window, and possessing a mounting system allowing interchangeable lenses.

Among the other SLR options, the FE2 was of rugged construction, dependable, and would only cost a little more. It quickly became my camera, and I could find its equal in no other. As for Stewart’s Photo, a couple very close photographer friends and I made it a regular hang-out and got to know the knowledgeable staff pretty well. 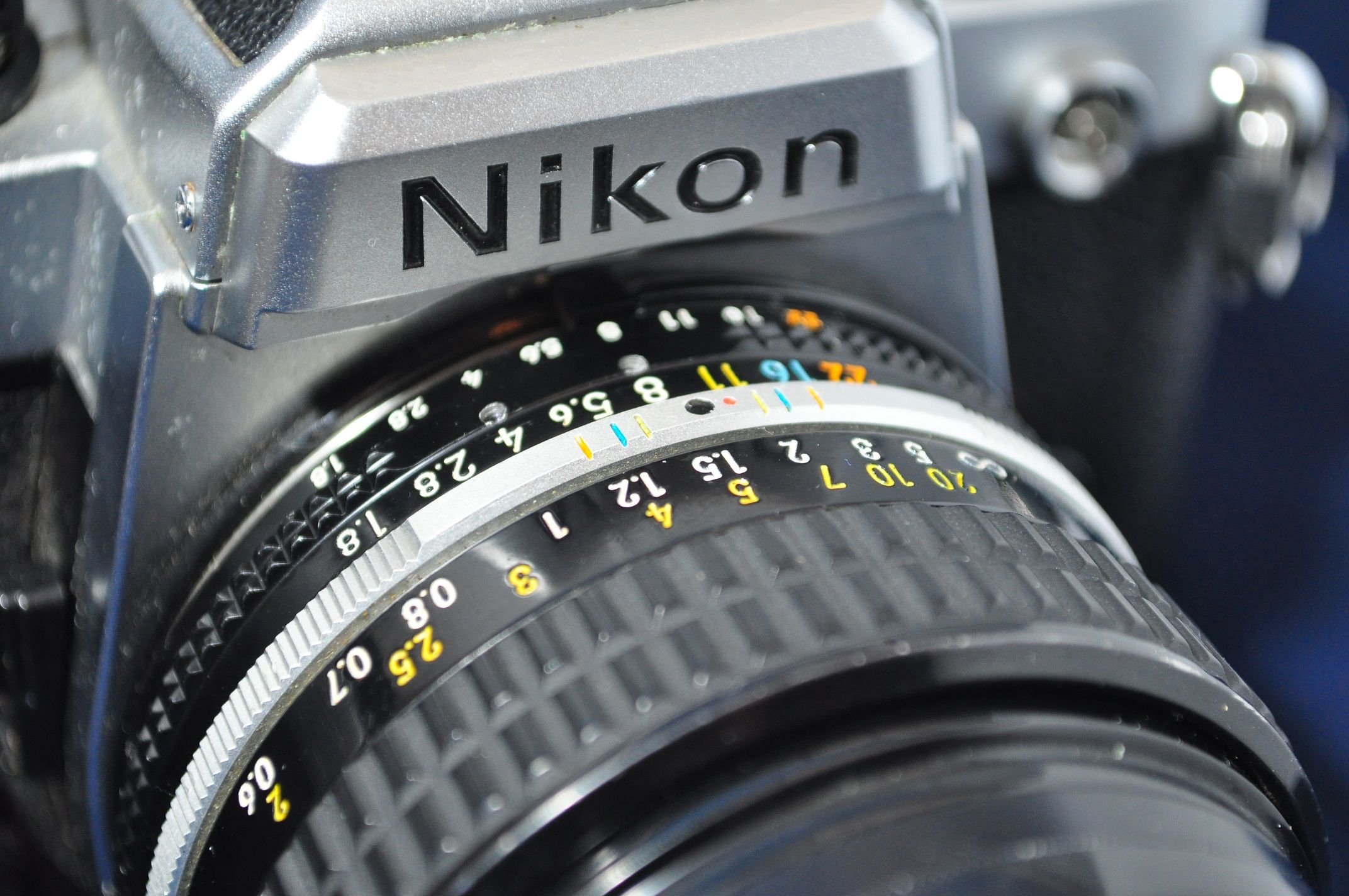 The best lens I’ve had for it (and there were a few) was the one that came with it: a Nikkor 50mm 1:1.8. A fast, prime lens, perfect for almost anything. Still a beautiful portrait lens, I’ve been known to slap it on my current digital SLR from time to time, since Nikon still uses the same mount style on cameras produced today. If this is all nonsense to you, I may explain some of the lingo in a future Photography 101 series of posts. For now, just know this little piece of glass is gravy!

The FE2 has a very decent built-in light meter. I have a range of other accessories and lenses, but most notable are a wide-angle lens and the MD-12 motor drive, providing the body with some extra heft and a firm handhold. And, of course, the benefit of being able to shoot 3.2 frames per second. This is a 8 AA battery powered motor to strap to the bottom of your camera. The wide angle is a 19-35mm zoom; a good focal range that gets you down pretty far before any fish-eye effect starts showing. These two paired together was my grab and go setup on several occasions. One of my best buds at the time (also a photographer) rode BMX with his brother and a group of friends. They always provided me with a bike for getting around, but they dominated the realm of tricks, flips, spins, and grinds. I simply rode from point A to B.

After film is processed to reveal the images recorded by the emulsion, it's called a negative. Here you can see why. You create prints via the same process you recorded the image onto the film, except this time the negative reproduces the image. Light passes through the negative, blocked by dark areas, exposing by a light sensitive paper. The areas untouched by light remain white after processing. This should give you a small idea of some considerations that go into producing a final image; film and paper selection play a large role. However, I had my share of “extreme sports”. I was an avid snowboarder and I engaged in this winter endeavor with pretty much the same group of friends. Whether at a jump built on the slope of a town park, visiting the only local resort, or in the back country mountains, there were a couple cameras around and mine was always one.

I hope you enjoyed meeting my first companion in the world of film. I ran countless rolls through this beauty. Oh, and in case there’s any mystery for the younger crowd: before images were recorded by an array of active pixel sensors, rolls of a transparent plasticized base were coated with an emulsion of light sensitive crystals. The image recorded by the emulsion would be revealed after a process of “baths” in specific chemicals, dying the crystals dependent upon their exposure to light. 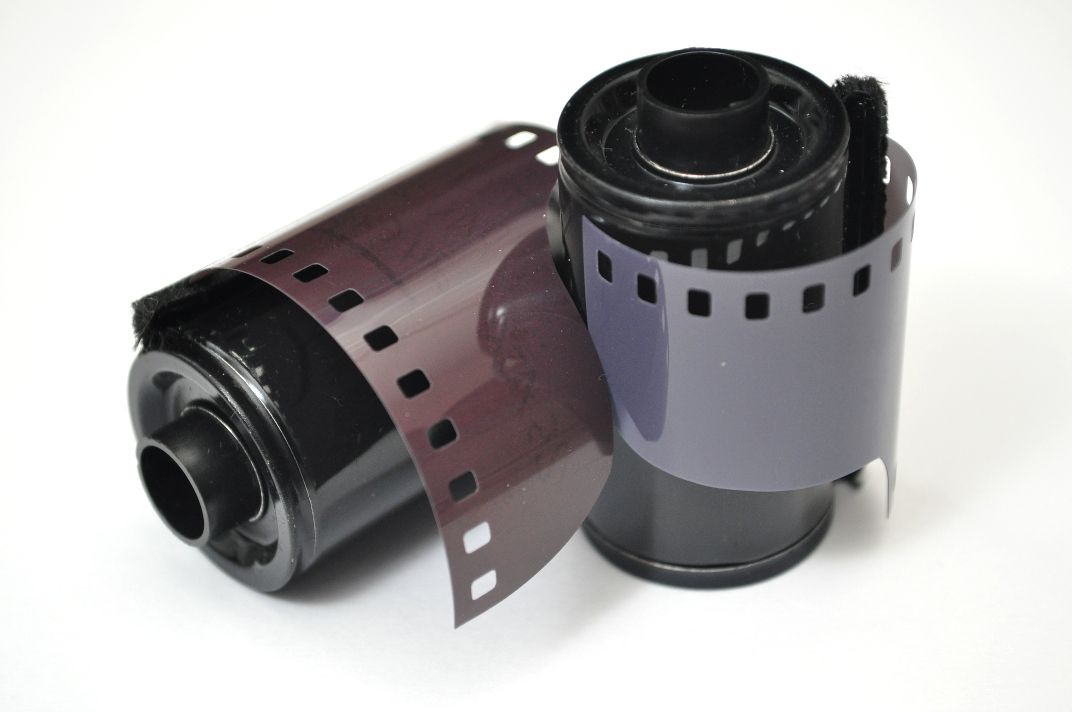 Feast your eyes on two hand rolled canisters of film! The left is color negative, the right is monochrome. Color slides, on the other hand, record images in positive color. This allows you to place them in a projector and display a series of images, true to color, hence the term "slide show".
The images of slides and negatives used in this post are extremely poor quality and don't do the originals justice. I apologize, as I don't have a quality method to digitize them. Let's not talk about the MacGyver methods I devised to share them in this post.

Thanks for reading. I hope you enjoyed this post. If you’d like to know more about what it’s like shooting film, please check out my older post referenced earlier. Also, @dbooster is constantly posting fresh photos, so give his profile a look as well. Occasionally, they may even be shot on film.

When I return with my next Ode to Film I’ll be sharing a camera that uses a larger roll of film and flaunts a very peculiar appearance.

I'd like to take a moment to mention The Writer's Block. If you're a writer looking to improve and get involved in a free network of peer editors, please click the image to the left. A bastion of fiction, non-fiction, and poetry, TWB is a wonderful community offering an abundance of opportunity and fun.

Nice stuff, i have also been a bit of a camera collector. I picked up a set of Nikon Em cameras a few years ago with four lens for €200. The lens had mould on them which I opened and cleaned. I use these on my Canon digital for movie making. I love the look of the older glass.

Yes, there are some old lenses out there that give a wonderful quality, this Nikkor 50mm being one of them. I think there's also a 1:1.2 aperture model available that's still highly coveted by photographers. I wonder what it is about the "old glass".

Oh, now you've just helped me spawn another idea. Perhaps I'll take identical photos with the Nikon kit lens and the Nikkor for a side by side comparison. Could make for a fun little post.

What an interesting read.

(I've yet to hear the terms 'nineteens', probably because I don't interact with young whippersnappers much anymore).

Back when I was in school, I actually had classes on photography (using an ancient huge fixed vertical camera), and we learned how to develop film, the chemicals involved, etc.

Kids these days have it good with their one-click phone cameras and fancy auto-focus.

Thanks Neg! So when you say "ancient huge fixed vertical camera", are you talking about a large format camera, or referring to the enlarger used to print negatives?

One-click and auto-focus luxuries indeed. I wonder how many kids in a photography class these days know there was a time you couldn't instantly review your photos. It made for a solid understanding of exposure, using light meters, and adjusting accordingly, because you pretty much had to go for it and find out if it worked later. If not, too bad, that photo's gone (unless it's a still life I suppose).

We're talking old. Poor school in central Wisconsin, this is how we learned photography. Very rough approximation, but ours was much more...monolithic:

Haha, you found an image of the oldest looking large format camera you could! That's awesome. That's how you really learn to do photography. Going through some of my old slides, I found images I took of a friend using a large format camera on the mudflats when the tide was out.

See, when the tide goes out here, there's no sand, just dense mud. Perhaps I'll go do a beach photo shoot to post in answer to one of yours sometime. Your beaches may be cozy and warm, but mine look more likely to welcome Cthulhu rising from the depths. Take your pick.

Ah the FE2. I loved that camera too. My Italian grandfather gave me one when I was in school. What an amazing camera. Wish I still had it. Hmmmm.... (no, I can't start collecting more stuff. dammit)

Thanks dbooster. As you see in the article, you're part of the inspiration for this post and the others to follow.

Pretty awesome you had an FE2 as well. It is a great body.

Thinking about that, it would be a good camera to give my son when he gets a little older. Right now I gave him an old iPhone to shoot with. But I will push him to film as soon as he learns a little more patience. The FE2 is a good one to learn on.

How expensive is the camera

Sorry, she's not for sale! Haha

I imagine you mean to ask what it cost when I originally purchased it. Two lenses and a bag with some accessories were included, all previously owned of course. Honestly, I can't recall what I paid for it approximately 20 years ago, but that's a good question. Less than I pay for new DSLR cameras nowadays.

Congratulations @aksounder, this post is the forth most rewarded post (based on pending payouts) in the last 12 hours written by a User account holder (accounts that hold between 0.1 and 1.0 Mega Vests). The total number of posts by User account holders during this period was 3517 and the total pending payments to posts in this category was $9184.77. To see the full list of highest paid posts across all accounts categories, click here.