Beyond Thinking and Language │Steemosophy 3/4 │

This post is a follow up of the previous post – I Speak, Therefore I Think - which I encourage you to read before diving into this one.

But I believe it holds value on its own if you don’t want to do that. 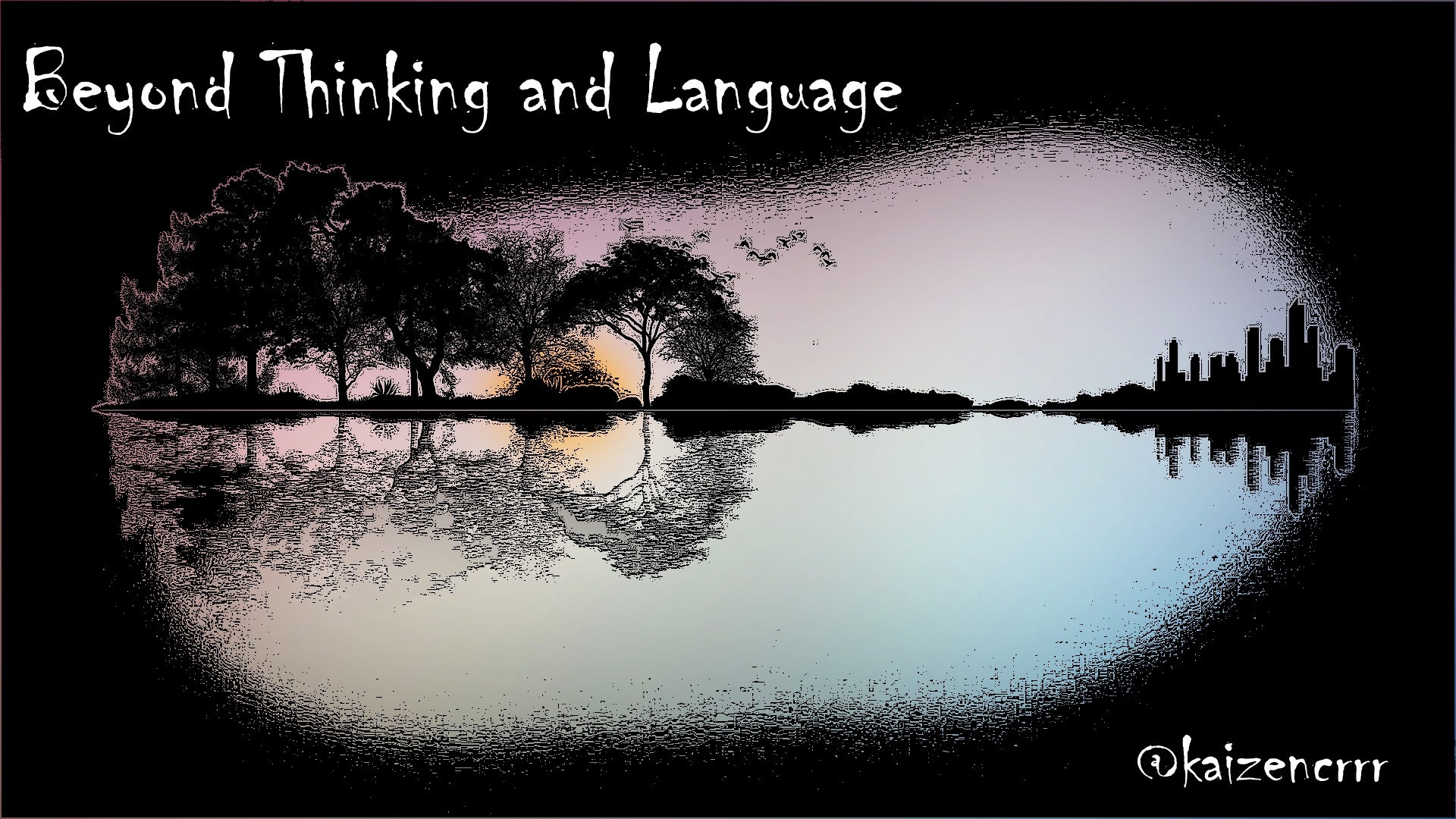 We concluded our last post with a question: what lies beyond thinking and language?

Throughout ages, in opposition to divinity, which was considered omnipotent, infinite & omniscient, the human was perceived as a finite being, therefore condemned to live inside insurmountable boundaries.

If we assume the existence of such borders, then it is impossible to cross them, and what lies beyond them is necessarily unintelligible to humans. From this we can deduce that the limits of our language should be situated around the same coordinates as our hypothetical border that we cannot cross, because comprehension of something implies that we have the words for it in order to be able to comprehend it.

Until here we consider that the limits of our language represent the limits of our world, and all our knowledge can be expressed through language.
We’ll not be referring to a specific human, but in aggregate – The Human – he encapsulates all the individuals and therefore all of their manifestations of the myriad of languages they possess. This helps us conceptualize our Human as the owner of all knowledge known to mankind and respectively as the possessor of the most exhaustive language possible, which means that our Human is able to see the World in its most exhaustive form possible to mankind.

Reality is reality. It transcends every concept. There is no concept which can adequately describe it.
Thich Nhat Nanh 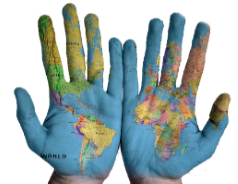 These 3 worlds, says Popper, forms the world as a whole. We won’t talk about the first two worlds, but will look into the third one for a second. The third, as conceptualized by Popper, contains the products of though. This includes abstract objects such as scientific theories, stories, myths, tools, social institutions, work of art.

The third world is the place where the human potentialities are born. It contains the power of creation. Through creation, as history shows us, humans were able to extend the reach of their inquiries.

For example, we didn’t know about the molecular world until the invention of the microscope. Or if some knew about it, it was in the unscientific sense that we devised in the first entry. So just because we didn’t know about the existence of a molecular world, and weren’t able to see it, doesn’t mean that it didn’t exist. We just didn’t have the means to see it, thus didn’t have words for it, we didn’t have theories about it, and explanations of the ways in which it works. But as soon as its status changed from unintelligible to intelligible, we clothed the conceptual content of our discoveries with words/concepts.

We are constantly crossing our boundaries just to find ourselves facing new boundaries.

So if our capacity for creation were to be limitless, that would mean that the only possible outcome would be the constant pushing of our boundaries, since we would keep creating and creating new means to cross them.

Every answer is nothing more than a new and unpredictable set of questions.
R. G. Collingwood

No one was able to refute our hypothesis about our limitless capacity for creation yet. Nobody would have imagined a few thousand years ago that the sky they looked upon would be crossed by future generations. No one would have imagined a few hundred years ago that we would stare at a luminescent thing called screen. And most importantly of all, nobody would have envisioned a few tens of years ago an “inexistent” place called Steemit, where people would make money by writing, reading and up-voting posts.

Therefore, even if we accept the existence of some boundaries that are limiting the depths to which we can dive in this world, we cannot ignore the existence of the third world, which enables us to explore new depths through creation.

That’s why I believe that the limits of our language and thinking are not invariable, what lies beyond them will not necessarily remain there forever. Obviously I can be wrong. Our capacity for creation might indeed be finite. But I think if that were the case, we are still far away from it. We will never be sure of that until we will create everything there is to create. All this means that you can Kaizen yourself until death.
You are not entirely bound to your circumstances.
There are many ways in which you can change them.

In the last post we will try to consider some of these ways based on everything we talked about in the last 3.
I will include a link as soon as I'll write it.

That was excellent to read but look like i missed the previous parts of it will be catching up them later :) thanks for sharing

I'm glad you liked it.
Thanks for taking the time to read it!

I find it a bit ironic quoting a Zen master to make a point about the value of discursive thought. Though perhaps not so much since you discuss its limits. ;-)

That's exactly why I selected a Zen master.
Since they claim to experience the ineffable.

So how would you resolve that contradiction? Is is a matter of definition of "knowledge" or "knowing"? I'm not being facetious.

So many questions that I still don't have definitive answers to...

What do you think? I'd love to hear what you have to say.

Seems pretty obvious that there are no definitive answers to this.

Personally, I view language as a formulating (and so a filtering) device - just like other thought-forms such as unarticulated memories or emotional impressions. This comprises a whole lot more "stuff" than language does. And yet there is a kind of knowing associated with them, as there is in straight-up awareness, or attention.

Like I said, nothing definitive, but it's a pretty broad place we live.

@kaizencrrr Steemit is gonna change lots of lifes, it has changed mine and many others but that is just the beginning. Followed

Thank you!
I truly believe in that.
Since I've discovered Steemit i've been all in for Steem Power.
I plan to buy more as soon as I'll have some disposable income.
All because I see the long term potential of steem.

The word can never be the thing, it can describe the thing and be used as a mental place holder for recall of the thing, but, it is never the thing itself.

The thing I find very interesting about words/language is that even though we can all agree to a meaning, the actual meaning applied by the individual is completely unique.

In many ways, the words we use limit us from seeing more as they can lead us to generalizations and the belief that there is no more unique to see within the group we have labelled.

To me, this means that many stop well short of the boundaries as they cannot imagine what may be on the other side so they choose to avoid the uncertainty and accept the known and therefore limited view as truth.

Thank you very much!
I completely agree with you.
Words attain meaning because we agree upon those meanings, but every individual is a subjectivity. No matter how similar two people are, they will never be exactly the same. They will always insert their own meanings.
We humans are so good at limiting our capacity to see the world and others for what they are.
Thank you for your great contribution to this post!!!

Oh my... That question will make my brain explode.
Can we?

That is my question for years, theoritycally, it is possible by using math and phisics theory, but to implement it... well we should find the way... anyway, i like to discuss about this more... i hope you write again... i do really enjoy it... have a nice day.

Math is a language too - you need to understand it to use it. A more formal language (with stated assumptions) but still subject to the same limitations.

Of course, math is language... hermeneutica... i love math and i use it to understand structure, rythm, and meanings of some writings... and it is still have limitations.. again, perceptions and assumptions... though in math we have so much deals/agreements which understandable by most of us.

So much information @kaizencrrr thanks for sharing.

My pleasure.
I guess we should thank all the great authors of all the books I've read for that))
The rest is pure speculation by me :(

@kaizencrrr So much information thanks for sharing.

Congratulations @kaizencrrr, this post is the eighth most rewarded post (based on pending payouts) in the last 12 hours written by a User account holder (accounts that hold between 0.1 and 1.0 Mega Vests). The total number of posts by User account holders during this period was 1004 and the total pending payments to posts in this category was $1604.09. To see the full list of highest paid posts across all accounts categories, click here.

you are a good writer..