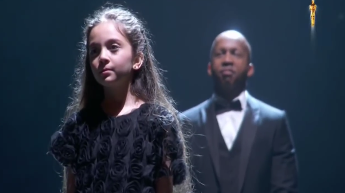 During the 2018 Academy Awards Oscar's ceremony conducted in Hollywood, California on March 4th, 2018, eight year old Syrian girl Bana Alabed was featured in a performance based around Hollywood's and the mainstream media's heavily pushed women's empowerment agenda and the #MeToo movement. The performance was opened with spoken word poetry presented by rapper Common. At the 1:20 mark in the video eight year old Syrian girl Bana Alabed appears illuminated onstage in a circle of light. She is featured throughout the performance which projects a message related to immigration, minority rights, gun control, and the mainstream media promoted women's empowerment agenda.

This use of eight year old Bana Alabed by Hollywoods Motion Pictures Academy of Arts and Sciences is particularly troubling, nefarious and misleading, to say the least, particularly because it has been well-documented that Bana Alabed is the daughter of Ghassan Alabed, an Islamic terrorist fighting in Syria who has fought for al-Nusra Front (al-Qaeda in Syria) and showed allegiance with ISIS. This fact has been well documented by myself and others over the past two years in a number of posts and screen captured images proving such. Numerous images and other related material proving such are at the following links. 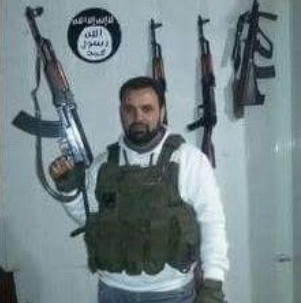 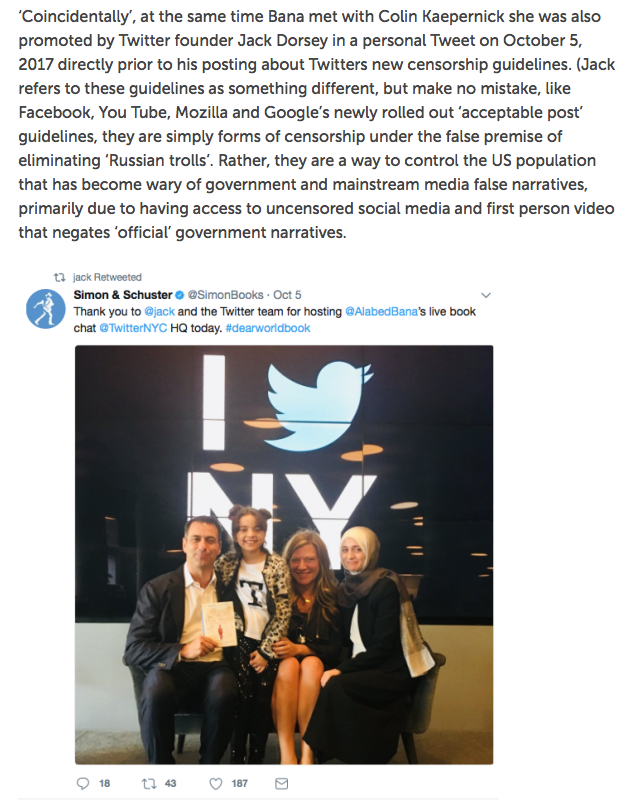 Note that when I put together that article on Bana's exploitation shown above in October 2017 that US social media wasn't being as heavily censored as it is now in February 2018. After the Parkland Florida school shooting event, things have completely changed quite rapidly and major social media networks are conducting heavy handed censorship across the board, from You Tube to Twitter, from Facebook to Reddit, from Google to Instagram, government affiliated corporate social media censorship is rampant as large social media platforms work together with the government to try to cover up the crimes of the global elite and their puppets in western governments. Alas they continue to believe they can get away with anything, as shown by their explicit, blatant use of eight year old Bana Alabed, the daughter of a terrorist, at the 2018 Academy Awards Ceremony.

Link to one dozen articles by the UK based 21st Century Wire revealing the Bana Alabed ruse: Note: In photo above the Alabed family meets with Turkish President Recep Tayyip Erdogan in December 2016 after Syrian and Russian Armed Forces liberated East Aleppo from al-Nusra Front and other terrorist groups. Russian forces placed Syrian families on buses to Idlib. The Alabed family left on the buses yet found their way to Turkey where they met with Erdogan and continued the Bana Alabed propaganda psyop campaign based around the little girl supposedly Tweeting from wartorn Aleppo which had no electricity or Internet services.

Note ISIS logo on the wall behind Ghassan Alabed. 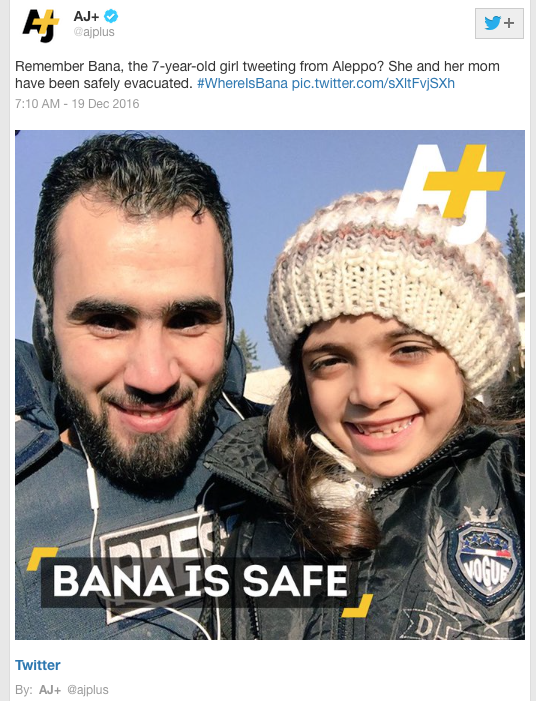 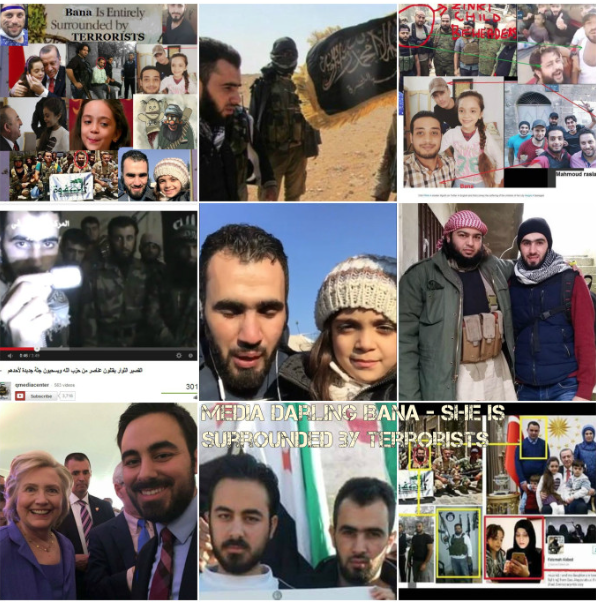 This is Hadi Abadallah, the terrorist that the AJ+ Twitter account reported that Bana was safe with. He is the lead propaganda disseminator for the terrorist groups in Syria, including the White Helmets. He is a dangerous terrorist who works with ISIS and Al-Qaeda in Syria. He has been photographed on numerous occasions alongside the leader of Al-Nusra Front (al-Qaeda in Syria) Abdullah al-Muhaysini. 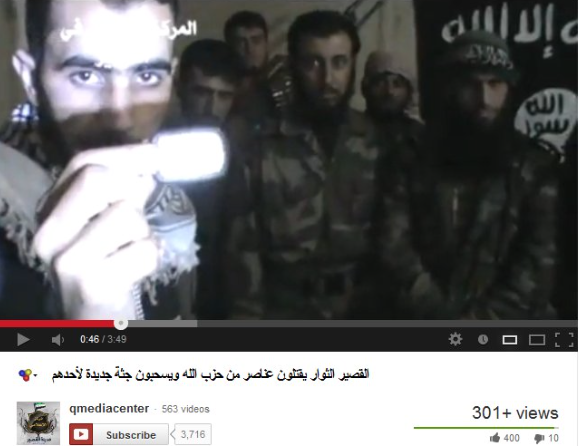 Links proving Hadi Abdallah is a terrorist are here:

Over 20 videos in video collage showing Hadi Abadallah working with terrorist groups and the White Helmets - Hadi and The White Helmet Boys - Hero's by Day, Terrorists by Night!

Bana's family terrorist friends in Aleppo were also involved in cutting the head off of 12 year Abdullah Issa in the back of a truck in July 2016. The video exposing that horrific murder is linked here and images below show who the perpetrators were and their association with the Alabed family. Note Mahmoud Raslan who took a selfie with the Nour al-Zinki child beheaders who killed 12 year old Abdullah Issa (left image) is also in an image with an Alabed family friend (right image), thus establishing the connection. The same friend is in the center image with the Alabed family. 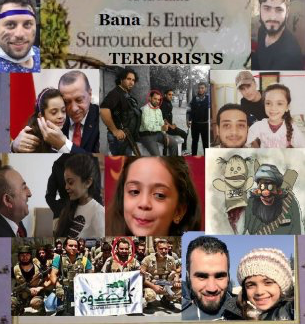 To learn more about the White Helmets and the Bana Alabed ruses being used by western governments and media organizations in the attempt to overthrow the government of Syria, please examine the following post:

At this point in time, the American people need to realize that their own mainstream media and government are fully complicit in perpetuating this psychological operation being directed against them. The media and Hollywood are meshing their Syrian false flag ruses and deceptive narratives into their intentionally fomented divisive agenda and faux empowerment movements that the media has been pushing for the past two years. The massive censorship rollout is being orchestrated to cover up this madness. Russiagate is an intentionally concocted distraction from the real threat that has taken over the US government and media and is intentionally fomenting chaos within society in order to prop up those that are deceiving the American people and robbing them of their hard earned wages via perpetual war and mass propaganda/surveillance/control.

The story of Bana is just one aspect of all this but it is important to understand that what is occurring here is in actuality pure deceptive evil. These dark minded people running Hollywood and the media are openly willing to exploit this little eight year old girl in order to further their nefarious agenda and violent geopolitical goals. They are now aiming to silence dissenting voices through outright censorship while at the same time conduct mass media saturation of false psychological narratives on the American and global citizens of the world. This is 21st century gaslighting taken to the darkest extremes. These individuals obviously care not about human lives and will do anything to further their agenda by consistently doubling down and pushing more and more these nefarious, murderous false narratives related to the war in Syria that they are now weaving into the American psyche. The one thing that ties Hollywood, the mainstream media, all these psychological operations, false flags and the war in Syria together is Zionists which are prevalent in relation to all these current deceptive issues. Zionism is the real reason for this madness. The American people need to wake up to this fact before their country is turned into the next Syria. Their exploitation of eight year old Bana Alabed proves beyond a reasonable doubt that the Zionists have no intention of backing down. 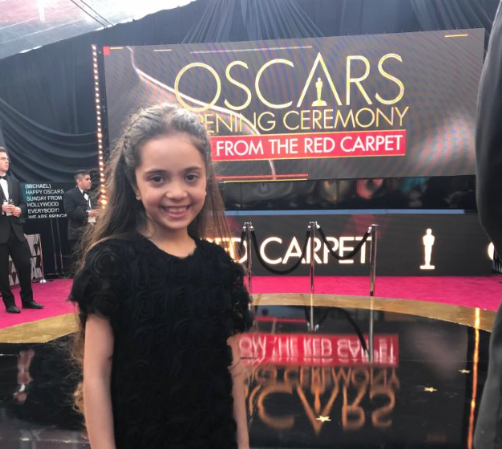 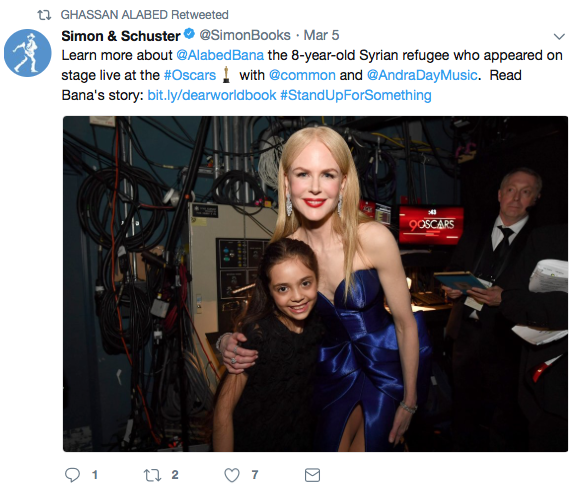 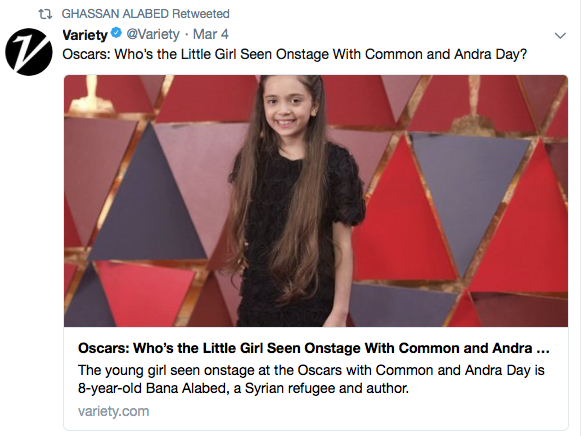 Caveat: The Zionists that control the mainstream media and Hollywood continually push the narrative that to be anti-Zionist is to be anti-Semitic. They are two entirely different things and the false conflation is simply another ruse meant to deceive those who call out Zionists for their crimes and deception. I subscribe to the Norman Finkelstein school of thought when it comes to criticizing Israel and its agents in the US government, media and Hollywood, and I outright reject the intentional false conflation. Christians and people of other religions can also be Zionists and Joe Biden and John McCain have both professed to being Zionists on camera on various occasions. Thus, for anyone to make the argument that posts such as this are about anti-Semitism is simply more deceptive behavior conducted on their part.

2nd Caveat: All the information above, and my opinion related to such, is based upon material placed online by the individuals mentioned themselves and others. It all ties together and fits a larger picture which, in my opinion, is quite nefarious in scope and manner. As an American citizen and US Marine veteran I reserve my 1st Amendment right to present such information in the modern age of blatant censorship, psychological projection, surveillance and mass media propaganda.

Excellent post and very sadly true. Shame on the governments trying to pull the wool over the eyes of the people.....and shame on those that turn away from the truth and close their eyes and ears, and then try to convince themselves they know nothing about what's going on. They are just as complicit in crimes against humanity.

Well we know that the US was funding Al-Nusra and considered them "moderate" rebels. Looks like they're one in the same with isis which is no surprise. And again, Hillary Clinton is involved, another sign of corruption. Hats off to you on doing so much research on this so that people can get another side of the story.

Thank you. My official Clarity of Signal Wordpress site has dozens of articles on all the terrorist ruses being conducted against Syria. Link here: https://clarityofsignal.com If you pull down the page, the articles are all on the left hand side. Kind regards.