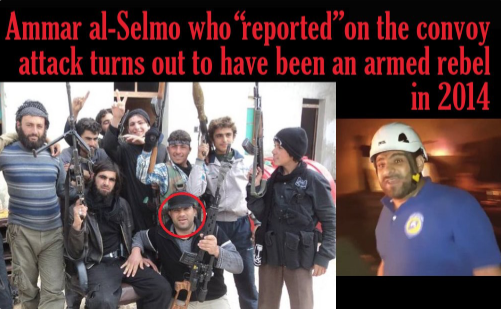 When it comes to what is going on in Syria, the western and Gulf State mainstream media can't seem to get enough of one guy in particular. That guy is self proclaimed White Helmets manager Ammar al-Selmo.

This post will present information and screenshots that chronicles the western and Gulf State media's use of information provided by admitted militant jihadist White Helmet Ammar Ahmed al-Selmo the manager of the White Helmet 'rescuers' who is regularly cited by western media outlets during alleged chemical weapons attacks (events) in Syria.

Link to the Facebook page of White Helmet leader Ammar Ahmed al-Selmo who was quoted as a source by western media directly in the wake of the April 7, 2018 alleged chemical weapons attack in Dhouma, Syria. His early reports provided the excuse for the US, UK and France to conduct a missile attack upon the country of Syria which is fighting ISIS and al-Qaeda, as well as combatting a number of psychological operations being carried out by western and Gulf State powers along with Israel in order to carry out regime change.

(Links to addition Clarity of Signal posts that reveal psychological operations being conducted against Syria will be included at the bottom of this post.) 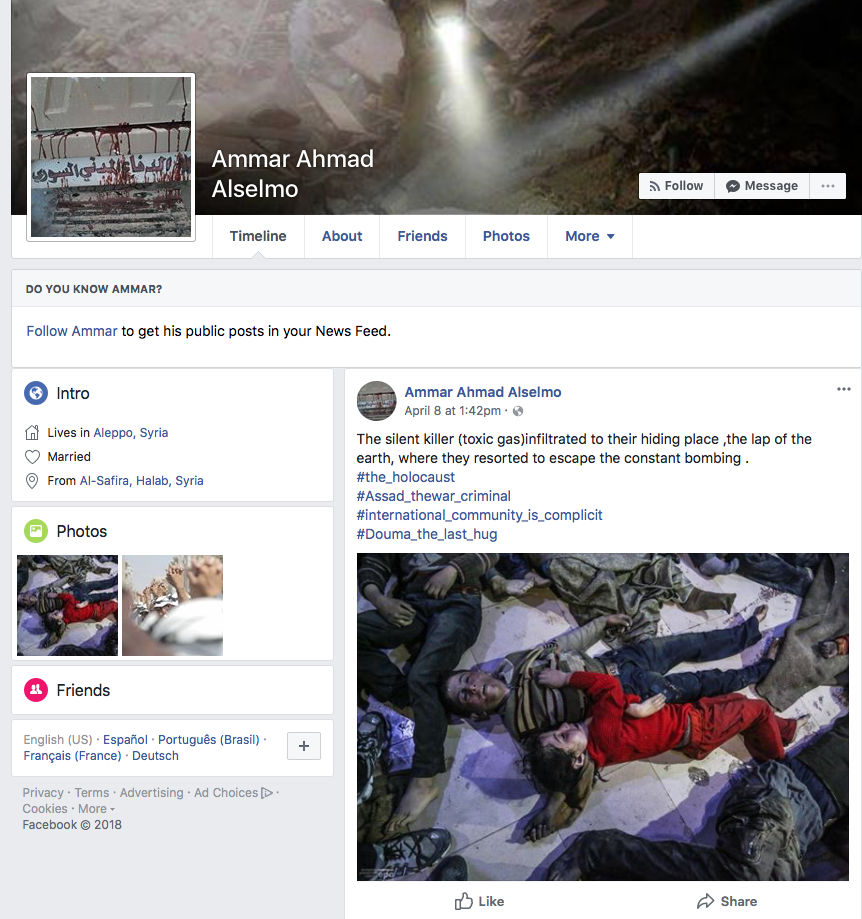 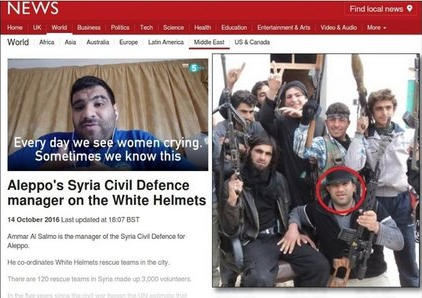 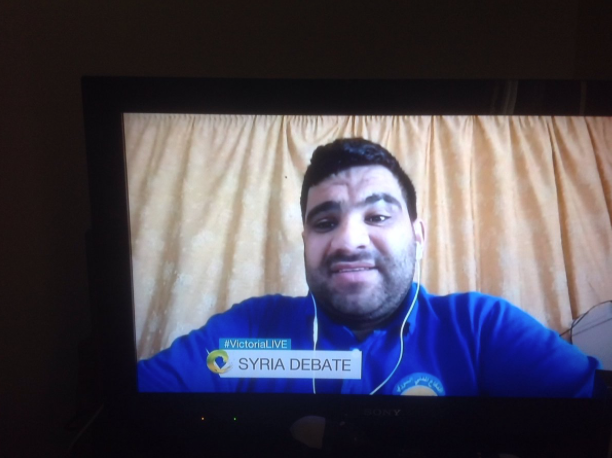 In the autumn of 2016 a number of alternative media articles revealed that Ammar Ahmed al-Selmo was not actually a legitimate source for information related to chemical attacks and the war in Syria, particularly due to his direct associations with jihadists and terrorist groups, along with his own admittance to Der Spiegel reporter Christoph Sydow (Tweet shown below) that he had previously been an armed fighter but gave it up to become a "peaceful White Helmet".

Note that the weapon he is shown holding is a Dragunov SVD long range sniper rifle that is normally the choice of an expert marksman.

Alternative media reporter Gareth Porter dug deep on the role of White helmets manager Ammar Ahmed al-Selmo in the fall of 2016 and exposed him in a Consortium News article while western mainstream media outlets gave the jihadist carte blanche to say what he liked with no accountability or verification as to the truthfulness of his statements. Mainstream western media and Gulf State media outlets continue to quote him as a reliable information source as they disseminate propaganda to the public and falsely portray events in Syria due to such. The use of a source such as al-Selmo allows these MSM propaganda organizations to claim plausible deniability for disseminating information to the public that may not represent the truth. It is a tired and much used tactic by CIA infiltrated organizations.

Article links and images below provide the real story :

How a Syrian White Helmets Leader Played Western Media
Reporters who rely on the White Helmets' leader in Aleppo ignore his record of deception and risk manipulation. 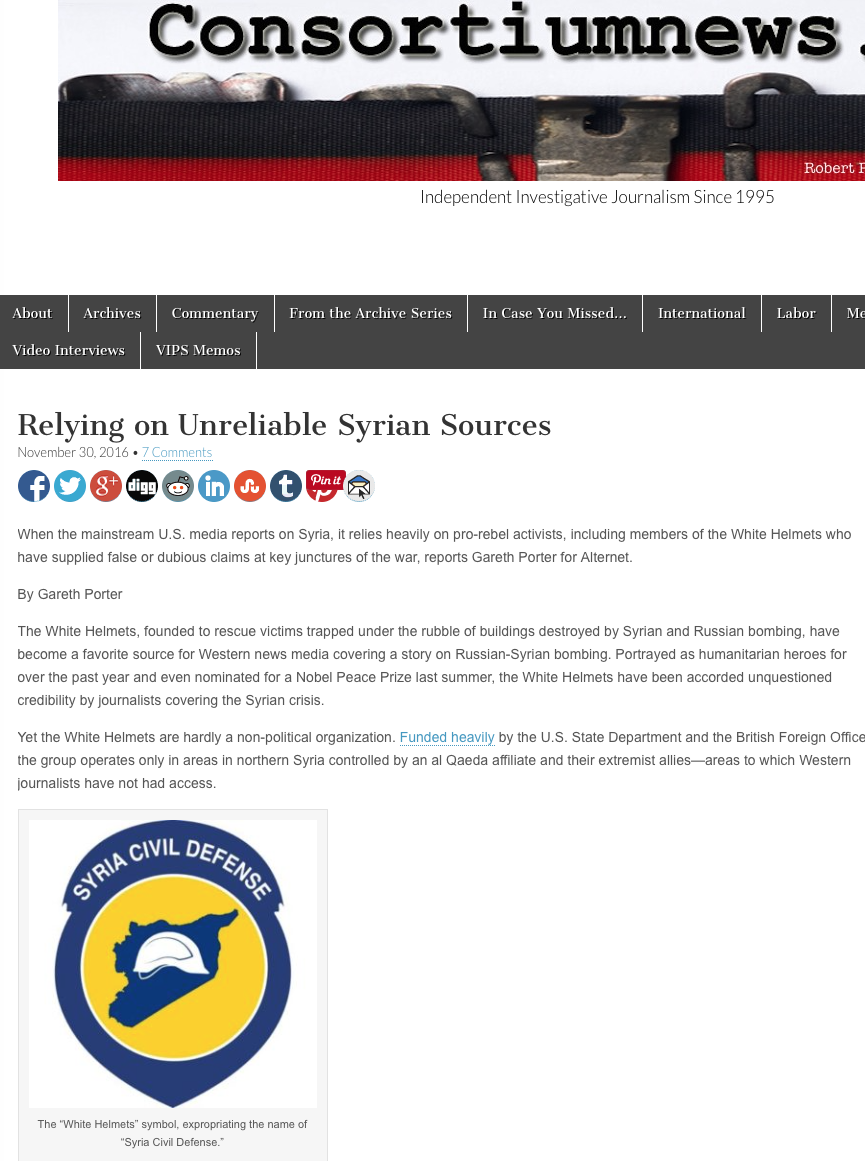 Even though these aforementioned important articles reveal that Ammar al-Selmo is associated with terror groups and has been completely proven to be an unreliable and compromised source, western and Gulf State mainstream media has continued to utilize him as a lead source for information up to the present day.

On the March 8th, 2018 al-Selmo was cited as a source by al-Jazeera in regards to an alleged chemical weapons attack in Ghouta, Syria. That allegation set the stage for the April 7th, 2018 false flag in Dhouma conducted by the White Helmets. In response to his allegations and those of other White Helmets members, the US, UK and France attacked Syria on April 13, 2018 with approximately 100 missiles.

A look back chronologically in reverse via western MSM articles and we can see the pattern of western media using Ammar al-Solmo as a source on events in Syria. 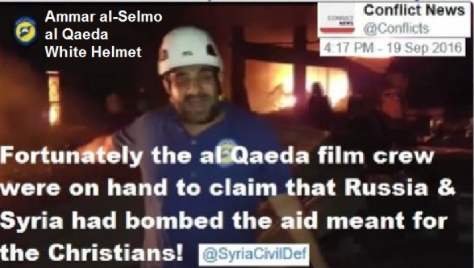 The Tweet above is from Germany's Der Spiegel online political editor Christoph Sydow who has been a staunch supporter of the White Helmets and produced dozens of articles touting them as a legitimate organization.

From Google Translate: I am now a peaceful, neutral white helmet, because I invite you to take this photo from 2011 up / he says: The photo is from 2011. Shabba came to me. So, I carried the weapon to defend myself. I never shot it 1/2 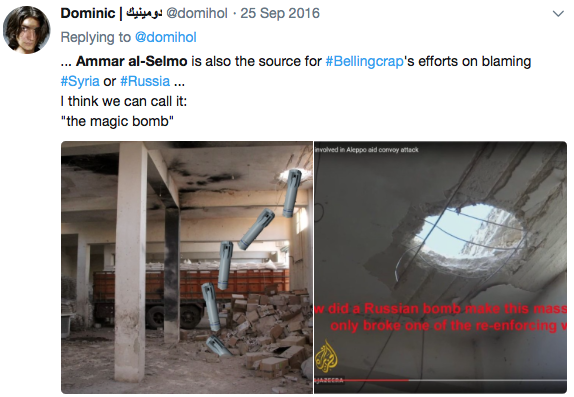 Here we see the Washington Post using al-Selmo as a source in an article by Louisa Loveluck and Erin Cunningham: 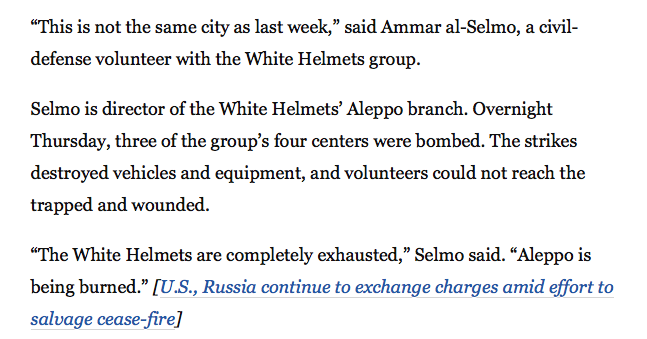 The Guardian UK and Reuters cited Ammar al-Solmo on September 23, 2016 in regards to alleged bombing of Aleppo (now liberated from terrorist groups) by Russia and Syrian Armed Forces.

(Note that the Guardian headline even declares that these are indeed 'rebel' held areas.) Now please also note that the Guardian UK stated in a 2013 article that 'rebels' had defected to al-Nusra Front which is al-Qaeda in Syria, and which is comprised of jihadists that are interchangeable with ISIS. In this linked May 2013 article the Guardian reported that the FSA and al-Nusra Front (al-Qaeda in Syria) were heavily linked - Article attempts to provide them some cover but points out that 420 fighters from one FSA brigade defected to al-Nusra front. 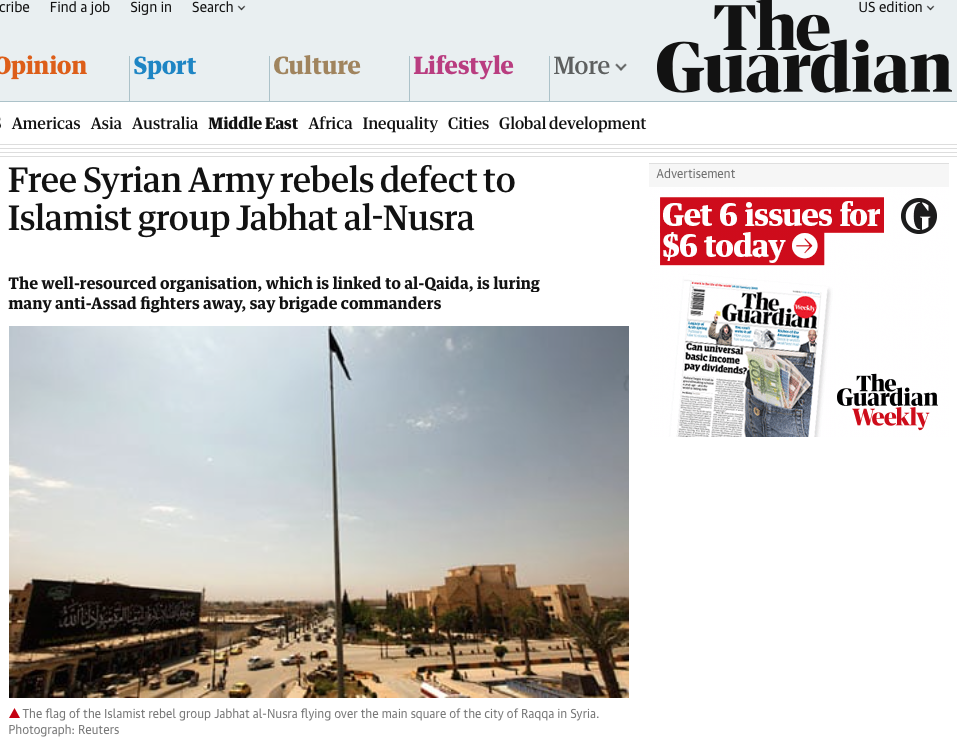 During the April 4, 2017 chemical weapons attack in Khan Sheikhoun Ammar Ahmed al-Selmo was once again quoted as a source across much of western media. 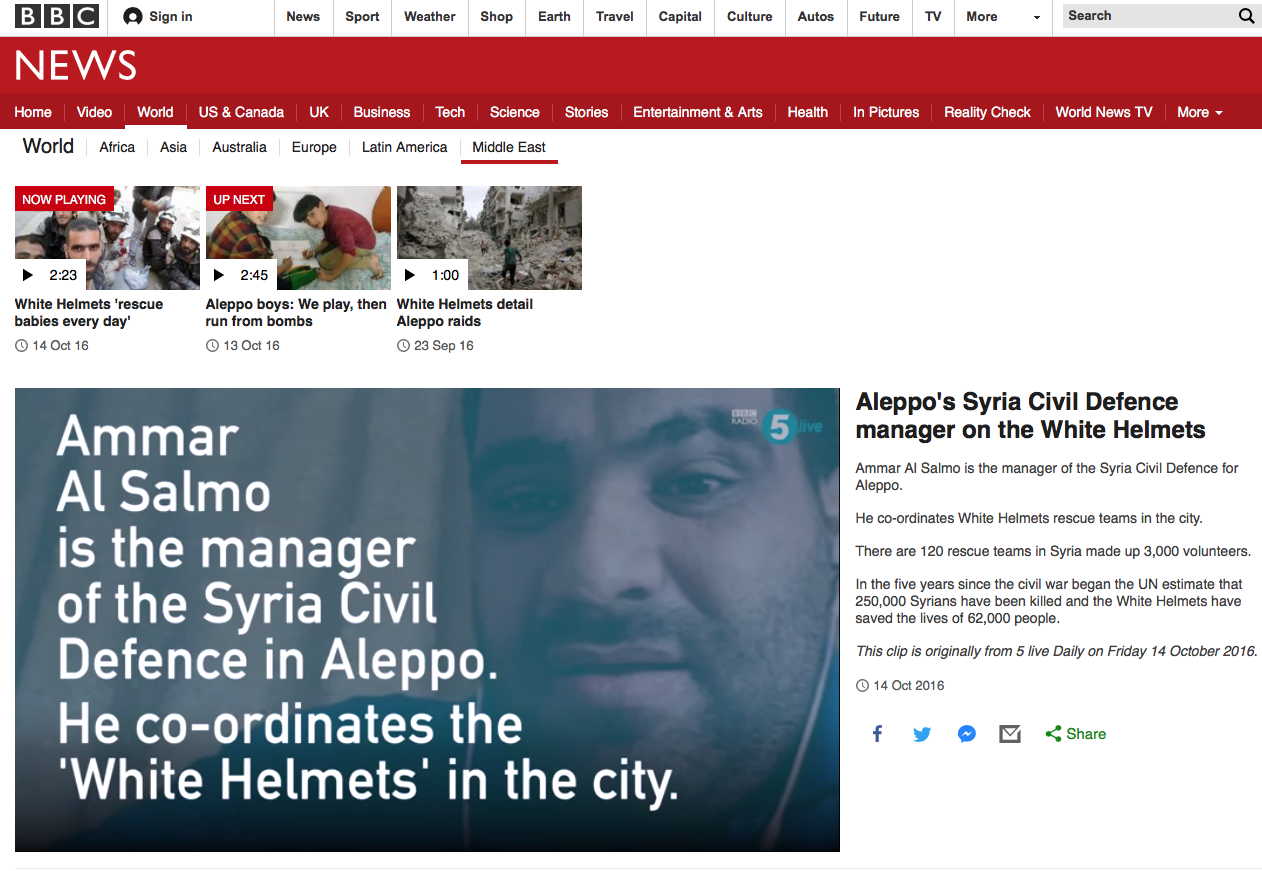 21st Century Wire has also highlighted the BBC's most recent use of Ammar al-Selmo on April 16, 2018 at the 23:20 mark in the following video: 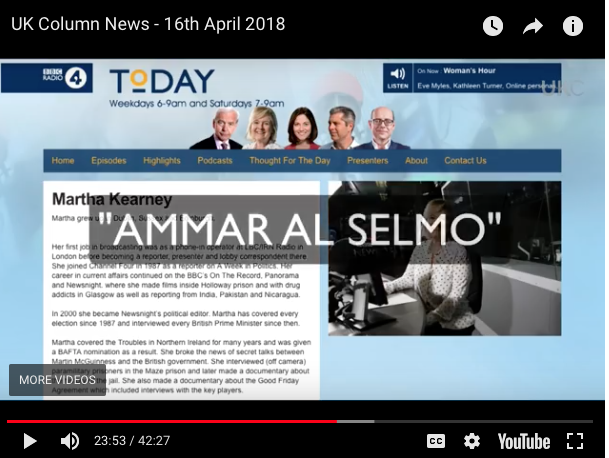 White Helmets Exposed on Twitter reveals all on al-Selmo at the following link. 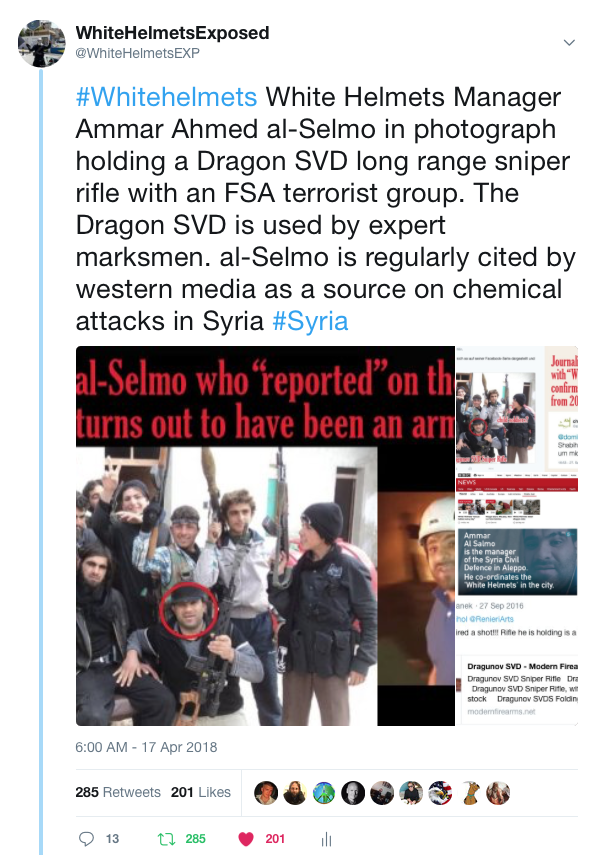 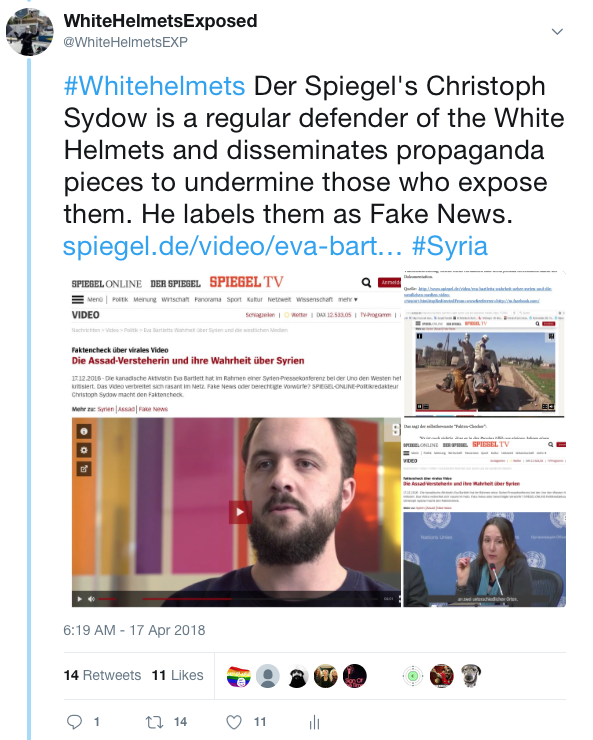 Judging from all the information above, it should be heavily questioned why in the world western and Gulf State media outlets would continually use this nefarious individual for information reporting on the war in Syria, unless of course, they have ulterior motives that have absolutely nothing to do with democracy and much more to do with regime change and psyops for the benefit of a few select global elitist warmongers and their puppets who continually rob the global public via money allocated and siphoned off for war contracts and insider trading deals associated with such. Alas, "up is down and down is up" in the new age of mass propaganda, censorship and global chaos.

This information is posted as a public service. My opinion is related to the information provided by the aforementioned entities and others who post material online. I reserve my right to free speech and to not be censored for such.

I had no doubt about it. Thanks for putting together this really informative, detailed, evidence based post, hopefully it will help open the eyes of those many people who still blindly rely on MainstreamMedia for their sources of news. Your post is what real journalism should look like.

I've been following the RT news articles exposing these white helmets. It seems like people are split into 2 groups at this point, the people that have common sense and realize that the main stream news and governments are lying to them. The second group being the people who refuse to look at the facts (the same people who voted for Hillary) and never will. As well as your article is put together I just don't know what it will take to get through to some people. I guess all we could do is keep trying and expose these people every chance we get...

Hey, @deliberator has been hanging out in the #informationwar discord channel. He is in contact with Tom Dugan who is on the ground in Syria. I mentioned you to @deliberator and suggested you'd be a good person to work with them due to how long and how deep you have been researching the white helmets. He also indicated he could put you in touch with Tom. I thought I'd let you know.

One of the most informative posts I've seen on this topic. It's great to start having some names and faces attached to this situation. It's what I've been wondering most about really, thanks

Mansour Aboalkher- The original source of the alleged chemical attack in Ghouta on April 7, 2018 was White Helmets member Mansour AboAlkher.

Thank you for the links, I'm on it

They have white kid with a baby face that looks like Justin Bieber..... And look where this guy has his hand right by the other guys crotch!!!