Hello, Steemians and my friends who speak English, I'm @notos!

Last week, we had (Lunar) New Year's day in Korea, and I was away from Steemit, although I had planned to upload 1 post a day. Before too late, I am going to share the short story of my family trip during the vacation.

On the first day of the vacation, I visited a ski resort with my sister's family and stayed 1 night together. And the next day, my parents joined us to enjoy skiing and snowboarding. I volunteered as a one day snowboard tutor for my sister's family, and seeing the little nephews improving so fast, I should admit the fact that the age is important to learn. In the morning of the very day of New Year's Day, I had the traditional Korean food, DeokGuk as in the picture, and in the evening we played Korean traditional game, Yut-NolYi, however I forgot to take picture of us playing that game. Instead, I attached a photo of us playing some card game my nephew had brought, of which the goal is to collect Queen cards as many as you can, and the one who collects most becomes the winner. And the younger one of my nephews won the game. We played a couple of games more, and I came back home that night. 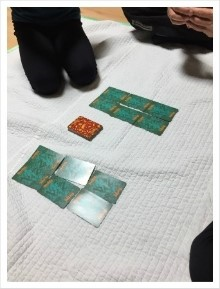 A new week has begun, and I am steeming during my breaktime and going to finish my post. Have a nice week Steemians, and Happy New Year!

See other posts of NOTOS