Spotify IPO valued at $20 billion?!? Plus what this means for blockchain music dapps like Peertracks. Find your creative freedom with the blockchain

Spotify is set to have its IPO in the next couple weeks and people are already throwing out valuations north of $20 billion. US fund managers are expecting Spotify to do to the music industry what Netflix has done for Hollywood. Spotify has around 160 million users and 70 million being monthly paid subscribers. The rest use the 'Freemium' service but are subject to tons of adds unless you tap now for 30 minutes of add free music. Yes, really...

Problem is that a big reason behind Netflix's success has been through being able to collect user data and use that to help know what kinds of shows to produce for maximum success. That does not really translate very well to the music industry. Is Spotify gonna really be able to replicate that success? Mix some Ed Sheeran acoustic riffs over some trap beats with Halsey and Beiber singing over the top of it? As much as we all love those trap hi hats and 808 drums I don't think it will have the binge worthy watching quality of Stranger Things. Plus there is still all those tricky music labels that Spotify has to pay. In fact they are paying so much that they are operating at a loss. Pretty substantial losses at that. Spotify lost $1.5 billion last year and $650 millon the year before. Ouch! Operating at such a loss is very off putting to me but investors have these high hopes. I mean if Spotify was an ICO I would rather just go buy some Dogecoins... Turns out that the payouts from streaming have not been that great either. A signed artist needs over 1 million plays per month to earn the average minimum wage amount of $1,260. All the middle men in the music industry have to get their cut so when it is all said it done it does not leave much for the artist. It also seems that the music industry has still been struggling to get back to the glory days before Napster really messed things up for them. Plus people don't seem to wanna spend $20 bucks on a CD anymore. So what can Spotify do to increase its profit and deserve this $20 billion valuation? Maybe they can use the blockchain! Oh yeah, they tried that...

https://www.coindesk.com/spotify-acquires-blockchain-startup-mediachain/
Mediachain was a project running on Ethereum. As far as I can tell from their GitHub and social media accounts it seems they hit some road blocks and the project is not moving forward because of the limitations of Ethereum. The gas on Ethereum causes a very unpleasant user experience for non crypto nerds. I mean do you really think the average person is gonna install Metamask, load up their wallet and go listen to Spotify to pay artists? 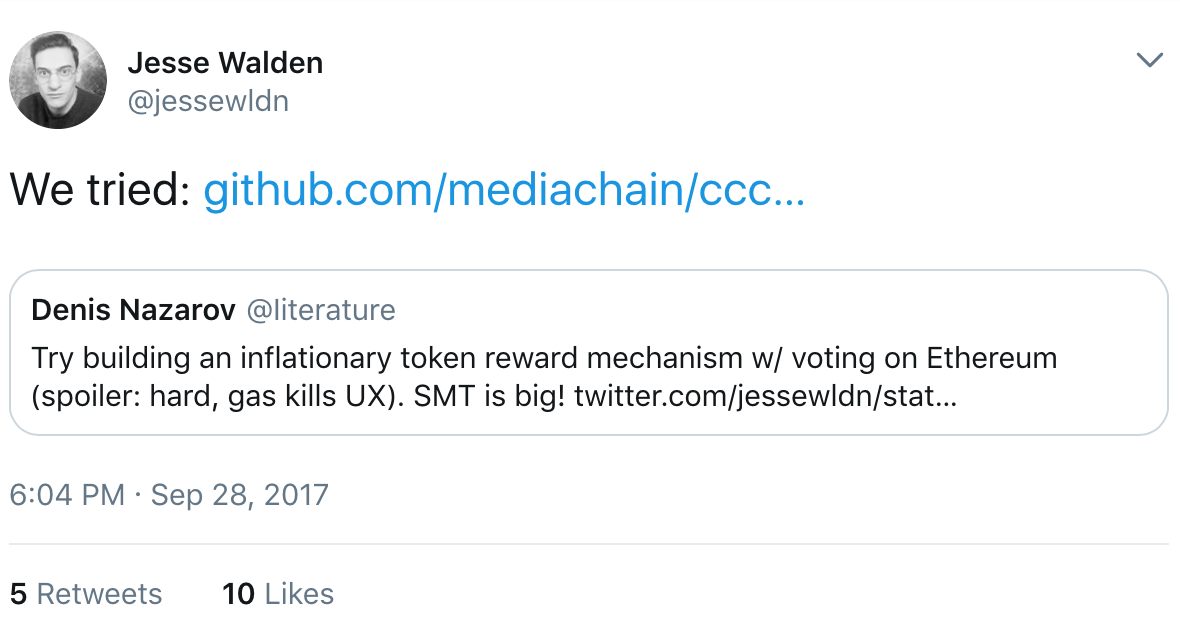 Now the lead Mediachain developer does mention that he likes Smart Media Tokens. Those of you familiar with steem know that SMT will enable other websites to monetize their user base like Steemit is doing with Steem. SMT's are cool and all but this is still not an answer to the problems that Spotify is facing. Do you really think Ethereum could support the 160 million Spotify users? I mean let's be honest here about things, a few successful kitten dapps and Ethereum is more clogged than your arteries after a lifetime diet of the dollar menu at Mcdonald's. Also if you plan on making your living off Spotify you will probably be working there your whole life too. There are already a lot of other blockchain music dapps trying to build on Ethereum but they are gonna face the same UX problems and scaling issues. So one possible solution that can help Spotify will be making use of the Muse blockchain. Now if you are not familiar with what Muse is then let me help you. Muse is building a global rights database that will be tailor made for the music industry. A Rights Management Portal that will allow meta data to be uploaded and make use of smart contracts to separate payment between all parties involved in a song. Muse will work similar to Steem but the block reward will be paid out based on how many users listened to your songs instead of upvotes. Monetizing streams powered by the blockchain. Early adaptor artists stand to make out pretty well with this. The first application running on Muse will be Peertracks. https://peertracks.com/ 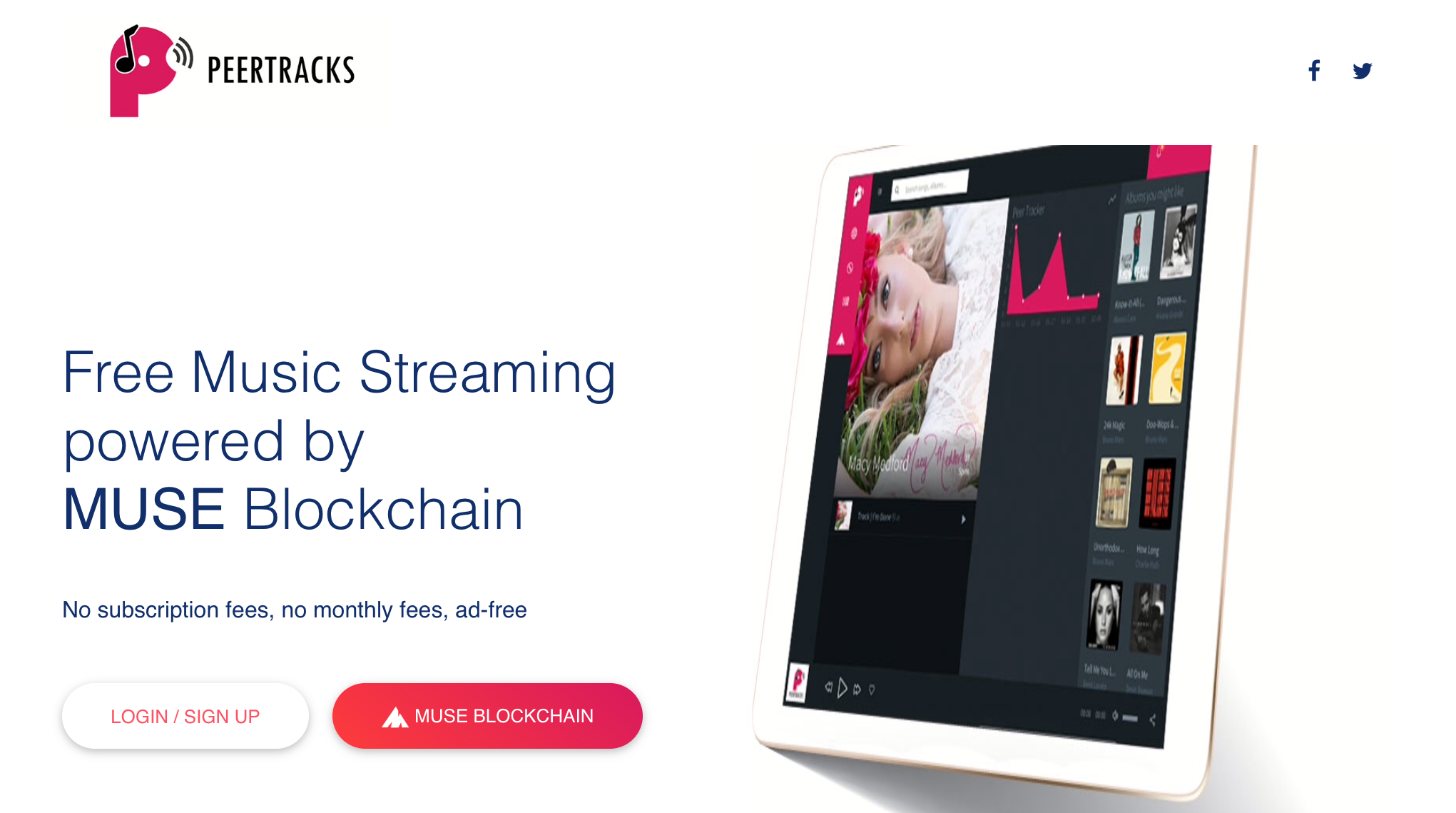 No subscriptions, no adds AND the artists still get paid. This is a whole new type of freemium and artists stand to make out very well thanks to the blockchain. Also this can be used to cut out the middlemen that suck up so much of the payout along the way. The beauty is that the legacy system can still make use of this if the Muse holder votes them in. So theoretically Spotify could be voted in and have payouts thanks to Muse. Streaming platforms that have been voted in by MUSE’s members get special privileges: MUSE takes care of paying out royalties INSTANTLY! Elected platforms, such as PeerTracks™, publish usage data to MUSE, allowing MUSE to know exactly how many times each song was played and exactly how much in royalties each right holder is to be sent. In exchange for getting streaming platforms to act in a fully transparent manner (publishing their data on a permanent, immutable open/public database) and allowing for direct, instant payment of royalties, they get their main expense subsidized. The MUSE system rewards good behavior. Think carrot, not stick.

So what should you do?

So if you are an artist looking to make use of blockchain technology I think http://museblockchain.com/ needs to be on top of your list of things to check out. Go ahead and sign up to beta test https://peertracks.com/ and get ahead of the curb. Obviously keep making use of Steemit with Dsound and Dtube but keep in mind that all these other blockchain projects out there that can't scale are gonna run into some serious problems if they start actually getting a lot of usage. Muse blockchain is powered by the same tech that powers Steem, Bitshares and EOS. Blockchains that actually can handle a large amout of transactions. Muse is getting ready to join the list of actually used Blockchains. Artists are about to have another tool to help them find creative freedom. 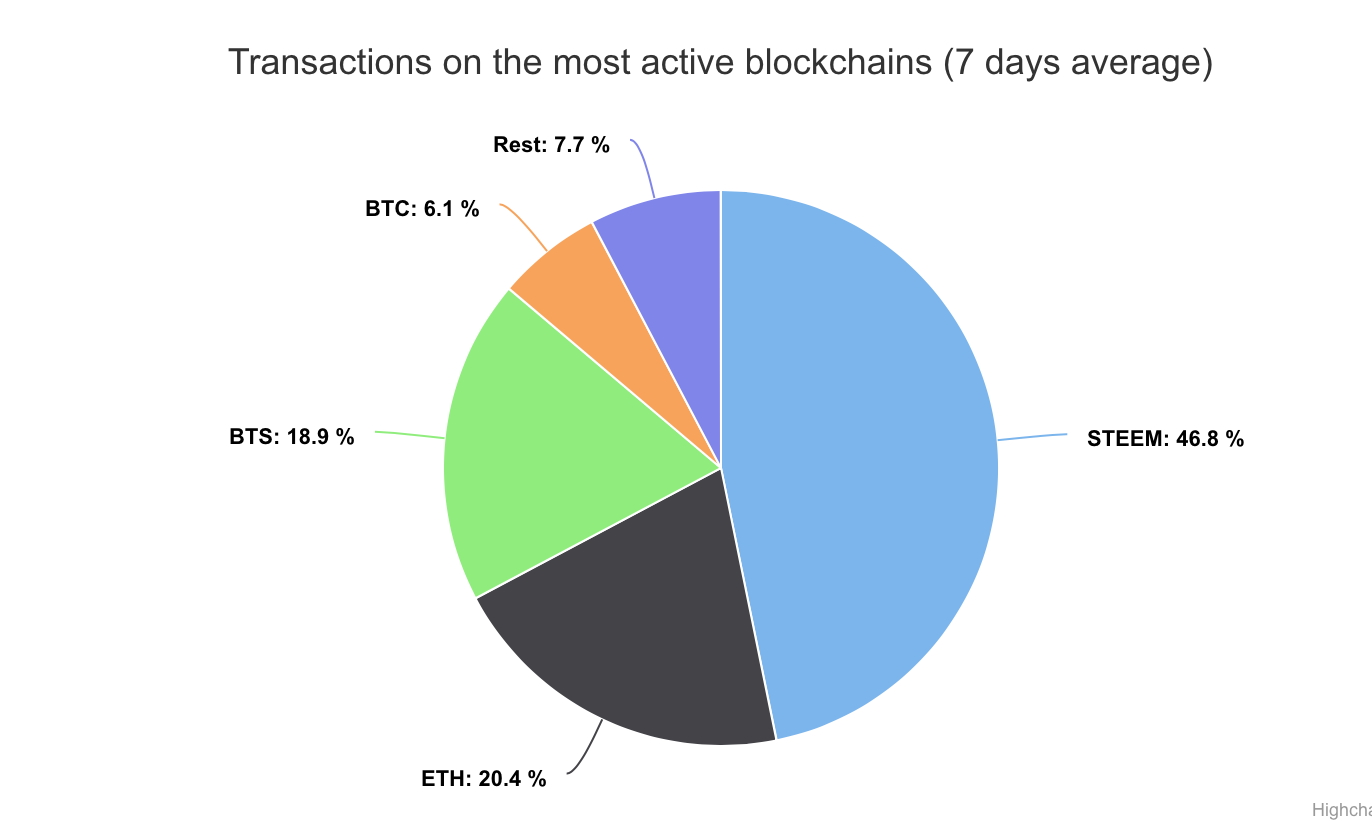 Excellent read! Thanks for the love :)

I can't wait for Muse to be tied with Steemit on blocktivity :)

Glad you liked it! I too really look forward to when blocktivity is overrun by Steem, EOS and Muse! I also can't wait to get some music up on PeerTracks. Big things on the way for the music world.

super man thanks for the info

Glad you found it useful

Great info! I like the Netflix analogy. You can’t just manufacture music based on collection of data. Mainstream music relies much on the celebrity of the artist too.

The other big issue I see is there is no longer an incentive to be a musician if you’re not gonna get paid. Obviously people that love making music are going to continue to make music, but unless you’re a huge superstar then you’re just broke making music for fun there’s no middle ground anymore for musicians. Hopefully Muse is the answer!

Music, like most other arts, has always kind of been like this so far though. You make no or very little money and are kind of struggling along unless your famous, or at least underground famous. But in recent years (much like the trend across societies in general) this discrepancy has intensified, I recently read some Professor describing it as the hollywood effect; meaning: fewer people make more money and most poeple just dont. I think Blockchain technology and platforms like peertracks and muse or musicoin, at the very least create the possibility for much more even distribution and hopefully artists with a smaller but dedicated fanbase will also be able to pay their bills.

Ding ding ding! Winner winner chicken dinner! Blockchain and Muse can help create the middle class musician. Once you trim the fat of the music industry artist are able to cook up some tasty profits.

Seems like Muse will be a good way for new artists to not only get their music out there...but get paid in the process. Getting rid of all the middle men should be really appealing to musicians!

Astute observation my turtletot friend. Muse has the power to disrupt the whole music industry. Give the power back to the artists and help create more middle class musicians.

Really great article.
I agree that Muse and peertracks seem to be in the top league as far as blockchain based music applications go that I've seen so far. Really looking forward to the launch!
I think Spotify is really overvalued. I recently came across an article during my research that mentioned the massive loss they make as well. I don't get all these massive companies operating with substantial losses and being so highly valued, everyone seems to go for a: be the biggest, become an effective monopoly like google and amazon; it's crazy.

Yeah the massive loss they operate at seems like it should lower the valuation. I do not understand but maybe they have some great plan to monetize all there users.

Good stuff and I completely agree about the Spotify valuation... just insane!

Thanks for reading. Yeah, I don't get how a company reporting 1 billion in losses for the year can be valued at 20 billion... Same people who invest in this also say bitcoin is a bubble. At least I can understand bitcoin's valuation

Great article! Just resteemit. Hopefully one day Muse and Peertracks will be a household name 😁.

Awesome! I think it has the potential to be a household name for sure.

Interesting, I know that Muse will be successful, since great artists will benefit, what crazy

Yep, artists with high quality music can make a lot from this.

Thank you @rumble for keeping it real. I especially like you explanation using this metric "A signed artist needs over 1 million plays per month to earn the average minimum wage amount of $1,260." It puts everything a little more in perspective. I'm off to check out Muse and Peertracks now.

Any way to get artists more money is something I support.

Muse can be so powerful,also.

Congratulations @rumble, this post is the sixth most rewarded post (based on pending payouts) in the last 12 hours written by a User account holder (accounts that hold between 0.1 and 1.0 Mega Vests). The total number of posts by User account holders during this period was 2340 and the total pending payments to posts in this category was $5891.71. To see the full list of highest paid posts across all accounts categories, click here.

When can I sign up for peer tracks tho. When are they gonna finally allow registration. I’ve been waiting patiently

This was amazing reading.