Beat Breakdown #1: How to produce a song from start to finish – FREE MP3 (Steemit Exclusive)

How are songs written and produced? Beat Breakdown is all about sharing the creative process and showing what goes into the making of a song!

The starting point is different for everyone and for every song, but for this track I decided to start off with a sample I’d found - “The Word II” by Shigeo Sekito. It has this unique murky sound accented with super bright chimes, whenever I find something like this I know I’ve gotta sample it:

And this is the song I made with it:


So what did it take to go from sample to song? 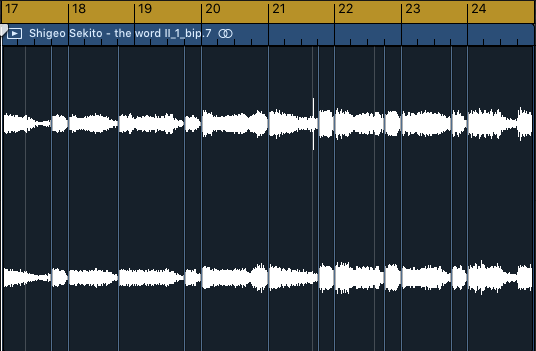 Once I’d chopped out the audio I was going to use from the sample, I raised the pitch up to a place where the energy felt better, and sped it up a little:

It felt much better, but it still sounded a bit messy – I used some effects to tidy up the sound and help it fit the atmosphere I was going to create with the other instruments:

Now that the main melodic part of the song was sorted I wanted to add a mellow dance feel to the track, so I started off by picking drum sounds that fit the idea. I programmed each drum pattern into my project, layering sounds on top of one another and adjusting them with effect plugins. The picture below shows how these patterns can become quite complex - each coloured block represents a sound and its placement represent it’s timing. In the audio below, a new element of the drum pattern comes in every two bars; the layering really adds up – check it out:

So I had my drums and lead melody ready… Next I changed the drum patterns for each part of the song (the verse, chorus, etc…) to keep things bouncing, and then I got started on the bass line.

Building up the energy:

Bass really adds a lot of depth and feeling to music, so I really wanted something unpredictable in the chorus that would get people moving, and something a bit mellower to contrast during the verses. I played around on the piano for a while with a synthesizer and this popped out (it’s quite a low frequency so you may struggle to hear it on smaller speakers!):

Adding and building the arrangement:

I pitched up the original sample an octave and filtered it a little bit so I could layer it on top of the main sample:

If the same sample just looped for the whole song it’d get boring fast, so I started working on a new section to keep the middle of the song interesting. I chopped the sample into smaller pieces, reversed it, added some slow down effects, and then layered the sounds together. The final touch on this section was a new bass line I added which ran through an old guitar amp – giving it a used, crunchy feel. Violà! Section done!

Now that I had all the different elements of the song prepared I arranged them into a structure that flowed, the drums created change throughout the song, and the bass gave it energy and movement.

Once I’d finished making these patterns I moved on to the final step, mixing.

The best way I can describe mixing is like this:

Imagine a car - it's got mud all over it, some bird crap, and the occasional leaf or two. Now get that car washed and waxed – all the features are going to stand out, the colours and contours, shapes, and details. Mixing cleans up the sounds and shapes them to fit into the song better.

So a few hours later I’d mixed the song and added some finishing touches, and this was the end result: A production ready to be sent off to artists & songwriters.

If you like the track you can download it for free within the soundcloud player above, exclusive to steemit! If you have any feedback or comments for future Beat Breakdowns feel free to post them in the comments section below :)

I’m looking forward to sharing more of these with you, and if you’ve enjoyed it give me a follow to stay updated! 🔥🔥🔥

Thank you for such a comprehensive guide to your workflow. Nice job! I've listed this post in my new "Top 5 music instructional posts of the week". That means that I'm promoting this post, upvoting with 100% Steem Power, resteeming and following you. Congrats! You can see the full list here: https://steemit.com/music/@musicsteem/my-picks-for-the-top-5-music-instructional-posts-on-steemit-for-week-ending-july-1-2017-upvoting-with-100-steem-power

Great write there buddy.. looking forward to more. Keep it up yea.

The beat sound very dope. Which d.a.w are you using to make your beats?

Great stuff. Impressive set up...
Any details as to equipment and tools used?

Yeah sure, I use Logic x as my main DAW, and Battery 4 for drums almost all the time - it's so easy to manipulate whatever you're using, I use it for bass too when I'm using 808's. Other than that, Massive/Omnisphere for synths, waves + Fabfilter for effects, and Sennheiser HD 280 + Rokit 5's for mixing

Oh I asked the same question before I saw this post. Sorry. Thanks for answering.

But ... Studio mixing is a walk in the park compared to live broadcast mixing. It's a good day, when the artist going on stage picks up the correct mic. (The one with the levels and the effects set for that specific artist)

Thanks man! I can only imagine... too many variables for me haha

Great post. It seems so simple, but it really isn't.

Nice beat! Followed here and on SC. Maybe we can do a song one day...

Thank you! I'll check out your page :)

thats a great lesson out of the classroom. thanks a lot for that tutorial and looking forward for more of such lessons from different perspectives and areas as important as this one

It's amazing how much value this post generates to the community therefore I mentioned you in my latest post :)

No joke, one of the best posts i've seen ..love how u broke down the stages of how you made it..is the software u use free/hard to learn to use? i think it would be fun to learn or just play around with..ill be following for the next beat breakdown for sure

Thats whats up i always wanted to produce my own music. I get a better idea in my head how i would go about doing it now. Good blog man. Check out this track I made
https://m.soundcloud.com/d-money-dolla/track-2

Its rap and all real life shit. Keep up tho man. I followed you :)

Great content, nice blog. It seems easy to do.

Awesome content. Checkout my Pink Floyd album review
I would love to have your comments on them and let me know if I opine right.

Great, thanks; it's very helpful the way you lay it out stage by stage. I've been making music on Logic X for about a year and I find keeping things varied is the most challenging part. Do you give feedback on other people's tracks? I produced a track based on some samples from an old documentary, which is up on Soundlcoud, here:

I'd love to hear your thoughts.

Nice to see some producing here on Steemit! Always inspiring to see another musicians workflow 😉

Have you tried Ableton live yet or are you logic through & through? :D @crownduels

Congratulations @atlassound! You have completed some achievement on Steemit and have been rewarded with new badge(s) :

Thanks for sharing ! I have tried creating music a few times but it's really not my thing.

Congratulations @atlassound! You have completed some achievement on Steemit and have been rewarded with new badge(s) :