Some beautiful photos from my last mushroom foray

fabulousfungi (56)in #mushrooms • 5 years ago (edited)

It's finally September, and we all know what that means...
Mushroom season!

I'm a proud member of the Mycological Society of Toronto and here are some pictures of our latest finds: I'll write a separate post with more details on each fungi, but for now I just want to share these beautiful pictures I took. These are some easy to identify and gorgeous mushrooms:

Earthstars are quite unique looking mushrooms and this one in particular has a beautiful collar around the base of the spore sac (that's how I remember its name, triplex because it has three parts, the sac, the collar and the branches). 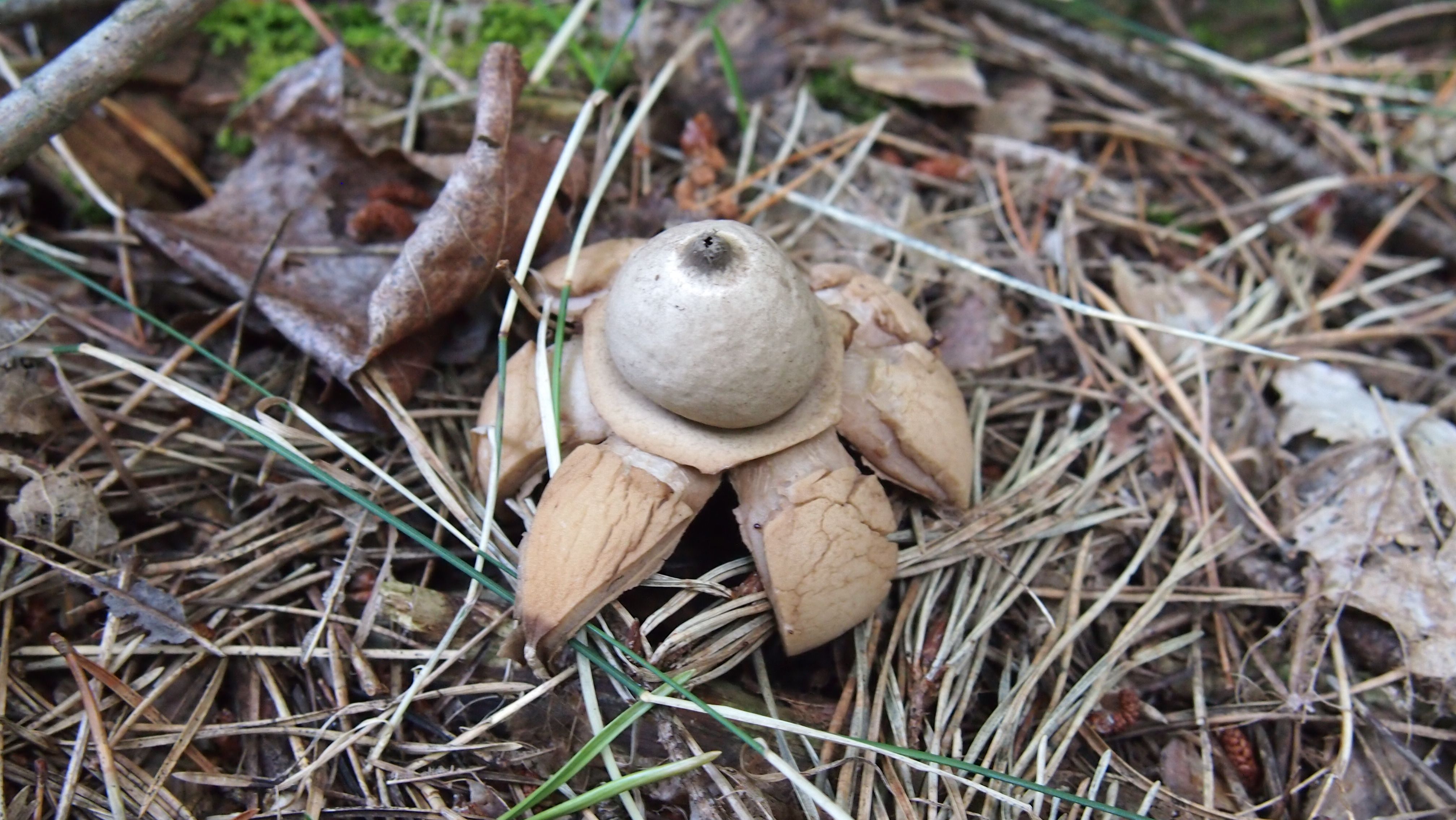 Another easy one to identify. If you find little white balls with spikes it's most likely Lycoperdon sp.; If it's growing on a grassy area it could be L. curtisii, but this one was growing on wood debris, so it has to be L. perlatum. I'm not 100% sure on this one, but this is my guess. The reasons, pores were labyrinthiform (picture not included), they had algae growing on top, and the caps were a bit hairy and zonate. 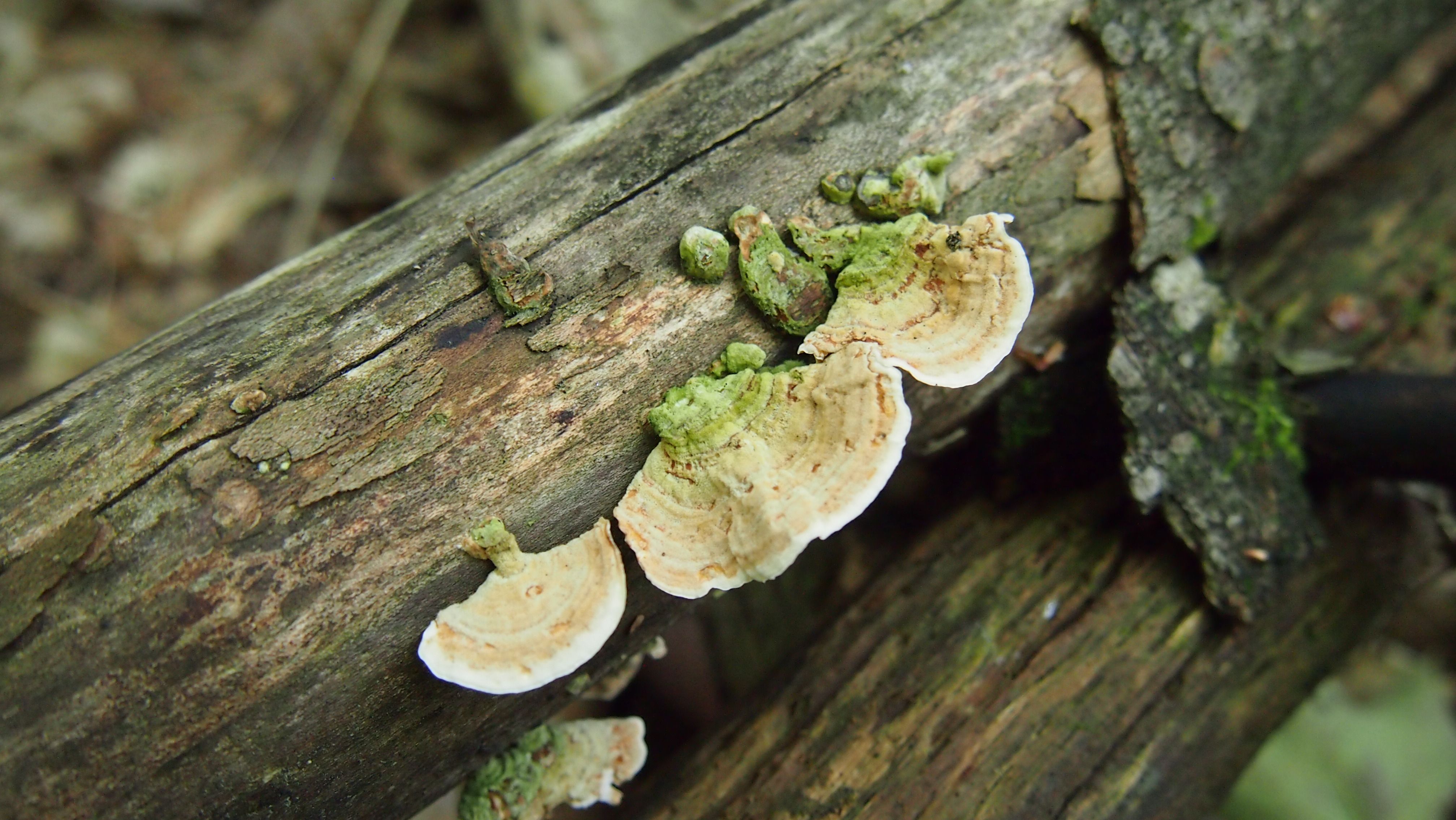 This one is really easy too. If it looks like poop but it feels woody and it grows at the base of stumps, it's X. polymorpha (aka Dead Man's Fingers). To confirm it though, cut it in half transversely. If it's white it's Xylaria polymorpha, if it's brown or black, it could be poop. The common name for this mushroom is Turkey Tail, and as you can see it looks a little bit like the tail of a Turkey (kind of).
This one is one of the most common mushrooms in North America and it's found growing on dead hardwood logs. The color of the cap varies a lot but it always shows a concentric, zonate pattern and its surface is finely fuzzy or velvety.
The one look-alike that can be mistaken by T. versicolor is Stereum ostrea (False Turkey Tail). The way to tell them apart, the real Turkey Tail has pores and the False Turkey Tail has no visible pores on its underside. 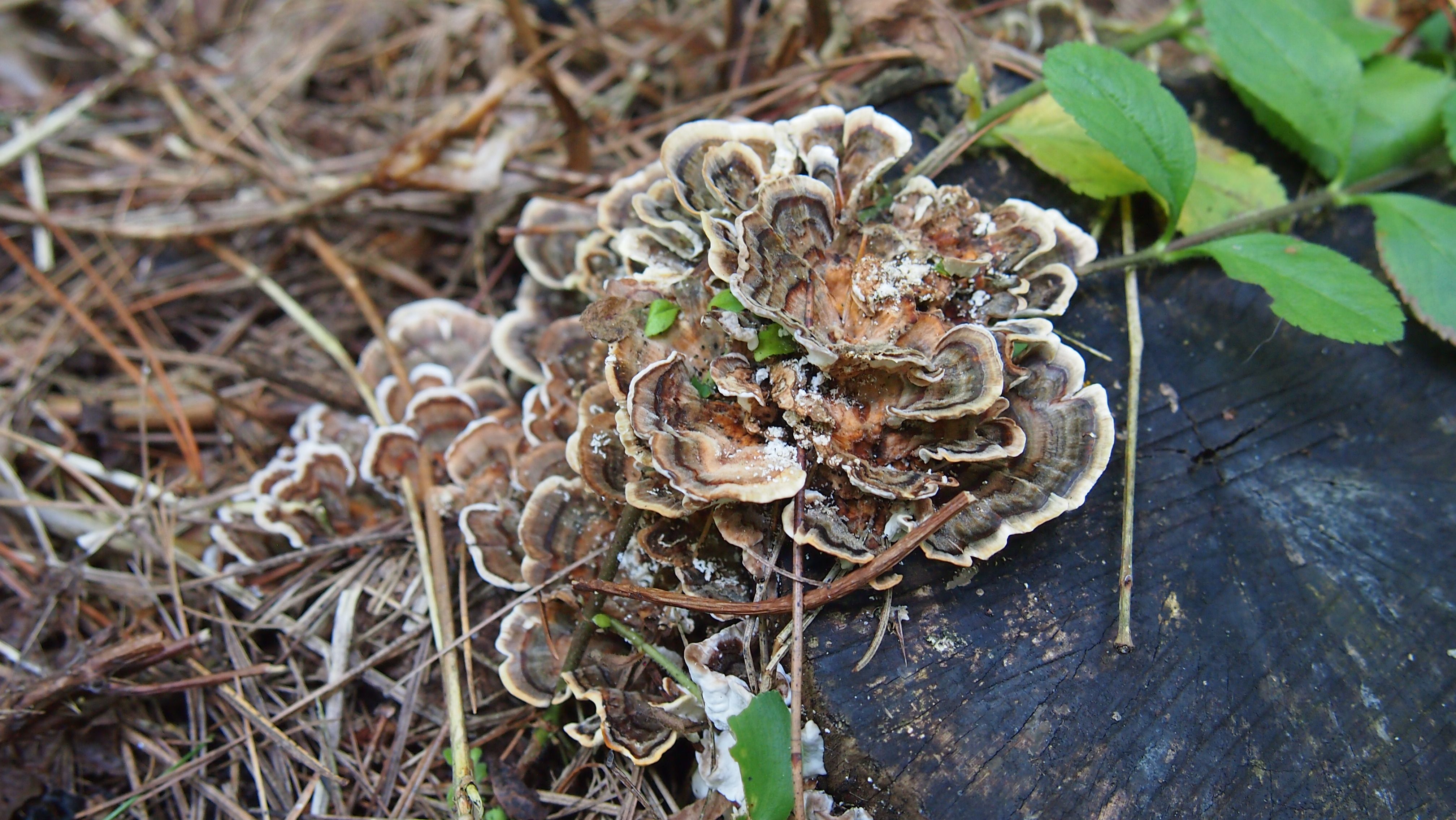 This was one of the biggest P. squamosus I've ever seen.
This fun-guy can be identified by its scaly cap and its thick, kidney-shaped cap. If you cut a piece of a fresh specimen it smells like cucumber/melon. My first thought was Cortinarius violaceus, but the spore color didn't match (Corts have rusty brown spores), there was no cortina (spider-web tissue covered on spores tipically found on Cortinarius sp.) left on the stem, and thegill spacing did not match that of C. violaceus.

After that, there was only one or two options left. It was clearly not the Purple Mycena (Mycena purpureofusca), nor the Purple Hygrocybe (Hygrocybe lilaceolamellata), so it had to be the Blewit mushroom (Clitocybe nuda).
I did take a spore print and it was light-pink (picture not included), cap was smooth and convex with an inrolled margin, the stem was thick and the flesh was purplish. Bingo! 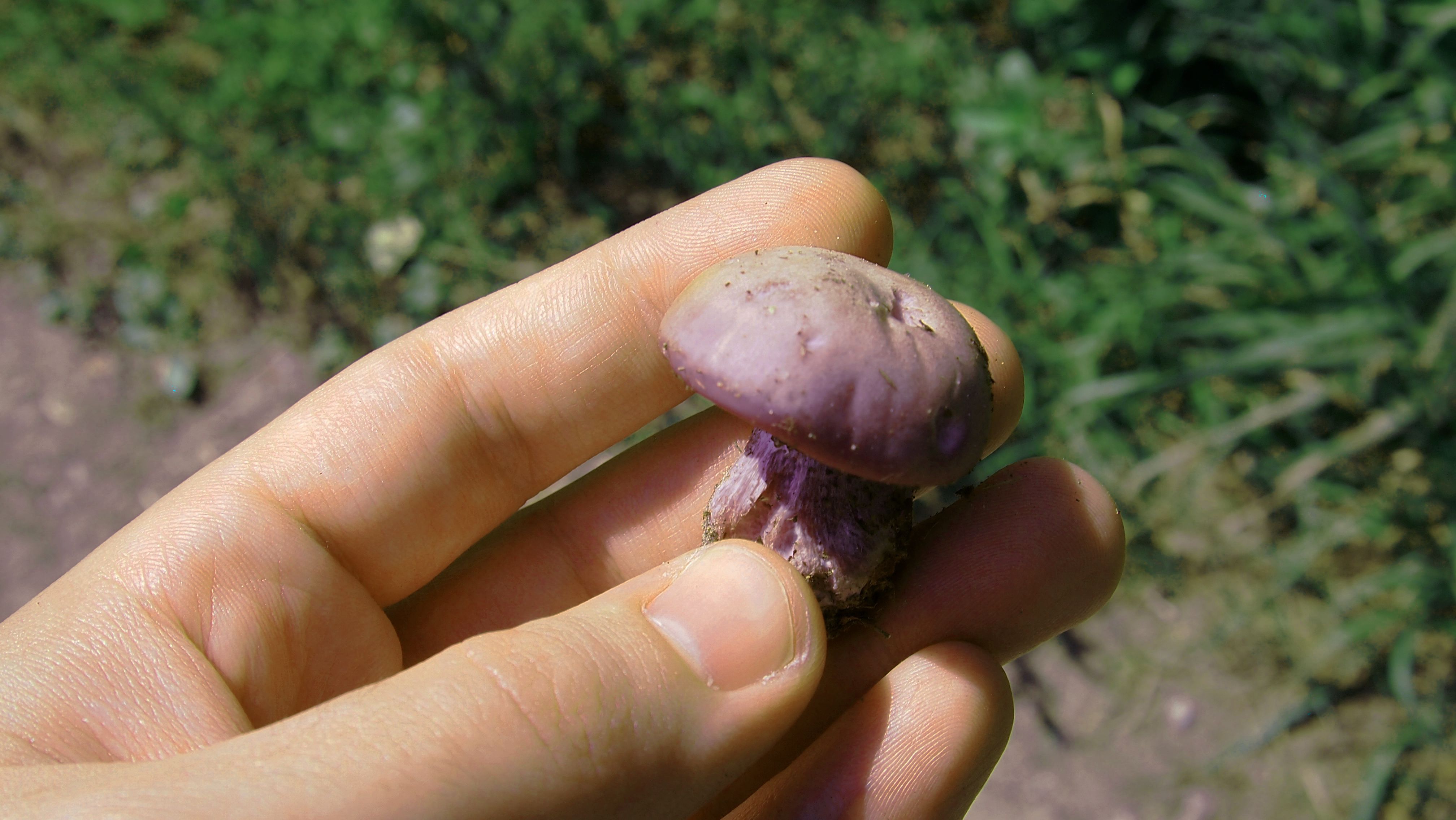 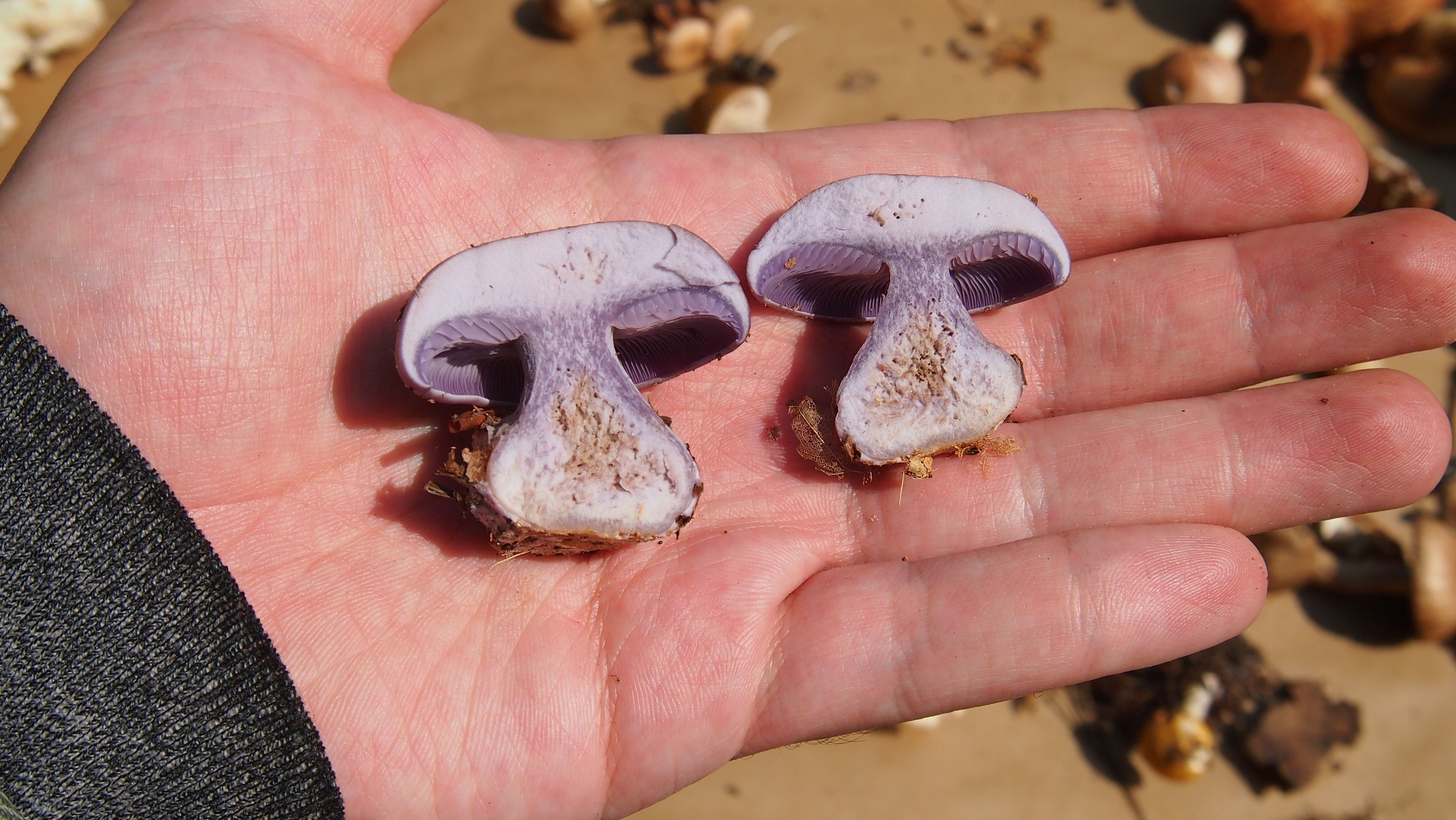 One of the most beautiful finds of the day. C. cinnabarinus (the Cinnabar Chanterelle) is easily recognizable by its bright orange color, but most importantly, because it doesn't have real gills but folds or flase gills under the side of the cap like all Chanterelles have. And that's it for now. Let me know what you think and follow for more fascinating mushroom content.

Proud member and supporter of the minnowsupportproject - brought to you by @aggroed, @ausbitbank, @teamsteem, and @canadian-coconut
Click the logo below to learn more

Wow ! Thanks for sharing sir!

Cantharellus cinnabarinus or known in Sweden as Kantareller are my favorite :) there's plenty of them on the Swedish woods , easy to cook

Looks like an awesome bunch of mushrooms. You must be a fun guy :)

this is great...thank you for following me @fabulousfungi. Now i can discover your mushroom journey. I live in a funky expat town in Guatemala. Some of my good friends started The Fungi Academy. this is there facebook page if your interested....https://www.facebook.com/Fungiacademy/
they are a learning community that have been harvesting mushrooms up in the hills. Ill make a short blog about them soon and share with you.

I believe I've said this before, but it bears repeating: I learn something new every time I read one of your posts. There is so much variety among the fungi, and there are so many tiny details that you have to know to look for in order to tell mushrooms apart!

Mycology is fascinating. It's also the only way I get to exercise, so it's probably going to save my life in the long term.
I really appreciate your kind words, it's worth to write these articles as long as people find them interesting.

Thanks for your help fellow mushroom lover!!

Hi awesome finds. I didn't realize that you were in Toronto. I'm new at mushrooming and trying to connect with people in my community but don't know where to start.

Do you know any clubs or groups in Sudbury? Perhaps you can ask at your group on my behalf, someone may know.

I'll ask around at our next foray.
The Mycological Society of Toronto sometimes organizes forays quite north. Next weekend for example, there's a foray at the Algonquin Provincial Park, which is not too far from Sudbury.

Thank you I really appreciate it. :)

Thankyou for sharing @fabulousfungi. . . I have followed you

Fantastic photography! I hope to see more from you.

This is the greatest hits list of mushrooms - very jealous! Particularly love the cinnabar chanterelles, which have a close place in my heart as the first find which I ate in their entirety.

Lots of nature walking coming this weekend - so maybe I will have a similar catch to show off :) . All in Pennsylvania forests, which I've had great luck in before. My fingers are crossed.

I love the shapes of those mushrooms. Thanks a lot for these wonderful pictures!

Whatever @resteembot resteems, I resteem too!
I am a new, simple to use and cheap resteeming bot
I will automatically resteem posts resteemed by @resteembot until 2017-09-22 00:00:01 +00:00
If you want to read more about me, read my introduction post. Congratulations @fabulousfungi! You have completed some achievement on Steemit and have been rewarded with new badge(s) :