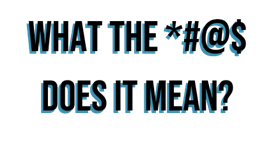 So about a week ago I caved into peer pressure and watched Annihilation, a movie released by Netflix this year and which everyone is talking about. I saw it everywhere: on billboards, Instagram ads, Facebook ads, TV commercials. I’d reached my limit, plus I love science fiction. Also, it was directed by Alex Garland, who directed Ex-Machina and that movie piqued my interest as well.

After I finished it though, this was my reaction:

I didn’t get it. I was blank. How on earth was this the whole movie? Was there an after credits scene that would explain the last 2 hours of my life? Nope, no scene. Just an ending that I would have profusely enjoyed if I were high. Obviously, I went online and read a million reviews and explanations. I will now tell you what I understood, and how great a movie it became once I did.

If you already watched it, cool, you’re about to finally comprehend it (if you haven’t already). If you haven’t watched it yet, this does have direct spoilers – I think. If you saw Ex-Machina, you kinda know what’s coming with this one. You see, the first thing you need to know about this film is that it is not the typical story of girl has tangible problem, girl goes on wild journey to fix problem, girl returns with no more tangible problem. This movie is all about metaphors.

At first, one believes that this is a love story. Lena (Natalie Portman) is shown to be pining for her dead husband. He has been missing for a year now and she hasn’t been able to let go, in spite of her colleague telling her she must. She is heartbroken, she cries, etc. We also see flashbacks of how cute and close they were as a couple, so the picture we paint is of a perfect marriage ended tragically because of his death. So when she finds out he’s alive we all cheer with her, it doesn’t matter that he’s different, he’s alive yay! But then he gets sick and she ventures out into an unknown, strange territory to save the man she loves. Viva l’amore!

Wrong. While she is in the The Shimmer (unknown alienish area), we start seeing more flashbacks: her telling him “you’re going away again? Another mission?”; them being a bit standoffish; him being quiet; her being alone most of the time; and ultimately, her sleeping with her oh-so-concerned colleague and then regretting it. In that moment we think “Oh, well, she thought her husband was dead, it’s not that bad”. But then we see that this happened when he was away on a mission and before he “died”. And from that scene where he coldly says goodbye, she realizes that HE KNOWS about the affair! Oooohhh, burn.

So it wasn’t such a perfect marriage after all, and this leaves us to understand one thing: she went on this trip not out of an unmovable loyalty and love towards her husband, but out of guilt. While she was having a bit of fun, her husband was out there living through some crappy stuff and then falling deathly ill. She feels indebted to him, to find out what happened so she can set things right between them and try to recover their shattered marriage.

Self-destruction is a natural part of humanity when you don’t feel confident enough in a certain aspect. If everything is going too well, you start doubting its longevity or reality. “Will this last? Is this real? How much time do I have before it goes wrong?” So before something external screws it up, we subconsciously do it out of fear and a misplaced sense of self protection. I’m protecting myself from hurt by hurting myself. What?

Each character in this movie has something of themselves that they feel is wrong. For Lena, I think it’s not being satisfied with how her life turned out compared to what she expected. She was in the military, so she must be organised and in control, and this dull life and marriage gone awry must drive her crazy.

The interesting bit is, every other character also self-destructs in this film, and they have different ways of doing so. Kane (Oscar Isaac) feels how his personal and love life is slowly going downhill, so he hides in his work, he re-enlists for more missions, he leaves his wife alone more and more. All of the women who accompany Lena to The Shimmer have metaphoric deaths as well:

The Mother lost her child and never recovered from that, so she was eaten by a mutated monster resembling a mutated bear. According to Celtic and Native American mythology, bears are the Primal Mothers and the fiercest protectors of their young, so maybe a bear killed her because she felt she failed to protect her own daughter? (Irony).

The Lesbian had an alcohol addiction problem and became paranoid, thinking the others killed the first, refusing to rely on anyone but herself (addiction = not seeking help, drowning in your problems). She then hears the dead woman and fiercely believes her paranoia to the point of falling in the monster’s trap (irony).

The Doctor has incurable cancer (irony), so she goes into The Shimmer to find answers and basically die, and so she finds complete enlightenment, union and life in death. The last one most likely suffers from depression because she has cut scars on her arms, even though she is a paramedic and saves lives basically (irony). She is the only one to embrace the fact that this thing inside her is not a disease, so she dies in peace, quite differently than how she lived.

For me, the main thing they try to transmit in this film is change: everything and everyone changes, it is inevitable, it always happens and – more importantly – it is okay to do so. Self-destruction is natural to humans, and it always leads to a change afterwards (good change or bad).

The Paramedic accepted the fact that everything inside the Shimmer was being refracted and changed. She didn’t see this change as something bad, just different. She didn’t look like she liked her life very much, so she welcomed this change with open arms and became something she felt was more beautiful than her physical body, as did the rest of the plant people who now surrounded her in the garden. A kind of heaven for her, acceptance and love of life.

That’s why they show us their marriage, because marriage and love also changes. But it isn’t always a bad thing, and to successfully come out smiling, you have to embrace those changes. Mainly these things change because people change, and that is also a natural part of life. Nothing is permanently static.

I think Kane couldn’t cope with it any longer, so that’s why he died and sent this new and improved Kane home. This person could give Lena a second shot at happiness with someone who didn’t have his memories and therefore didn’t know all her flaws and would make her happy. Lena, on the other hand, had this metaphorical dance with this entity and she realized that no, she was not going to do the same as Kane. She would face reality and all its obstacles, embrace change.

This is why, at the end when they hug, she also has shimmering eyes. It doesn’t mean that she’s an alien clone (like Kane2), but more like she has gone through a tremendous metamorphosis. She is not the same Lena that went into the Shimmer. She is renewed and will make a new, more peaceful life with that knowledge.

Did you like our review? Do you agree with our analysis or do you have a different opinion? Did we finally make you understand this intensely perplexing film? If you have any opinion at all or want to suggest another movie so we can review it, please leave them in the comments! We’d love to hear from you. YES! Thank you for this. I watched it last week and came out of it thinking Whatta f*** did I just watch?!
It still doesn't make it as awesome as Ex-Machina was, but at least now I get the jist of it, and even relate to it, as I'm sure many others will.

Exactly. After that I was like...uhhhhh. But now I at least understand it and, most importantly, understand the characters and their actions (and the creepy-ass monsters).