Time for a Christmas movie! Netflix has a good selection of movies meant for everyone's favorite holiday. You really should check it out.

Of course, the problem then becomes which movie, from among so many options, do we choose to review this week.

Well, I've got good news for you, because this week's movie is a classic, full of fun and mischief. It's about a boy who has to fend his home off from intruders using only his wits and whatever is on hand. And household objects are used as weapons in hilarious hijinks. And a crazy old man in the neighborhood turns out to be not so crazy after all.

Have you guessed which Christmas movie I'm talking about?


A Most Unusual Movie Gremlins is a peculiar beast.

On the one hand, it was and continues to be a refreshingly original story. But it also borrows heavily but other well-known movies, including E.T., Invasion of the Body Snatchers, and even The Wizard of Oz.

The central conceit is based on modern folklore. A gremlin is a kind of fairy who sabotages machinery, especially airplanes, which was invented during the second world war to explain various mishaps encountered by the British Royal Air Force. A fairy who specializes in machinery? Wait, does that mean Tinkerbell is actually a...

You would think that these creatures, lacking the centuries of tradition that surround other big-screen monsters such as vampires and werewolves, would not be ready for their own feature film. And despite earlier attempts by Roald Dahl and Walt Disney to popularize the creatures, they didn't take off. But in the anything-goes, Spielberg-fueled fever dream of the 1980s, Gremlins got the green light. And since that time, the creatures have wormed their way into the cultural consciousness. In a sendup to noir movies of yesteryear, Gremlins opens with a man in a fedora walking through Chinatown, lured into a mysterious shop by the boy who works there. But instead of a detective, the man turns out to be a traveling salesman, who bungles a sales pitch with the sullen shop owner.

However, while examining the shops artifacts, the salesman discovers a strange creature which he purchases to take home as a Christmas gift to his son.

This creature is called a mogwai, and just looking at it is enough to convince me that all pets will one day be replaced by animatronic robots.

The little guy's name is Gizmo. And he's the perfect pet.

His species, however, comes with three important (but ultimately nonsensical) rules:

And, naturally, all of these rules get broken by Billy (this an 80s movie; every boy is named Billy), causing Gizmo to multiply and his offspring to turn into vicious scaly gremlins. But while, at times, the gremlins seem more mischievous than actively hostile, they do kill quite a few people, including most of the bullies and jerks that were introduced in the aforementioned slow buildup. Yet quite a few innocent and likeable characters also meet their ends here.

And yet all their monkey business, no matter how lethal, is always injected with a fair amount of humor, to the point where some of their schemes are just downright silly.

And it's all a very good excuse to show off the cool puppetwork, and ultimately serves the movie's tone of comic horror. Needless to say that this is a film that does not take itself too seriously.

Which brings me to my next point. Apart from Gizmo, the characters of Gremlins are all pretty forgettable.

Billy's mom gets few spoken lines throughout the movie, and it isn't hard to imagine how she could have been left in the background, had the filmmakers opted for that.

But there is a stretch, right in the middle of the film, where she becomes the story's focus, and it is some of the most graphic footage in the entire movie. Billy's mom, it seems, is quite the accomplished killer. The gremlins can be killed by sunlight, yes, but they are also susceptible to other, more spectacular forms of death, whether that involves getting stabbed with a kitchen knife, trapped in a running blender, or cooked in the microwave.

And it's all done with such nonchalance that you can't help but wonder what else might be lurking under the seemingly calm exterior of this woman. It's some delicious character development, and it's done with almost no dialogue whatsoever.

Gremlins is a gem of a movie---one that needs rediscovering by our sad and cynical world.

But I suppose we shall not see any more Gremlins movies. They have, after all, drifted out of the public eye and all but disappeared from the modern media landscape. Though I could be wrong.

Gremlins is on Netflix right now. Watch it...unless you're scared to.

As a kid I had a toy from the Gremlins and was always afraid that it touches the water and gets evil :)

Loved it very much! @talanhorne! 💚 Merry Christmas to you and your family! ☺ 🌲

Ideal for this Christmas time gonna enjoy this one :)
thanks for sharing

Time to enjoy the holidays :D thanks for the post

Yes Netflix has really good collection for holiday like christmas

So let's enjoy this time @talanhorne

thank you...steem on and stay blissful.

You are a good person to write.your ideas and writing have been fulfilled.
This is great article and good advice.
(((((( Resteem service)))))

Netflix has always some thing interesting for us,,and at the time of x'mas it' even batter.thanks for the post. @Reteem

That is great post & very interesting movie and good I think.
@talanhorne
have a great day

Nice explained about this movie..
I'm realy like watch films...I think this film is good for my kids...
Love it sir...thank u so much sharing this post...
Cheers~~~

hahah such a cool way to describe the adventurous fun cool writing nice :)

@talanhorne,
Wow that's a great one! I will find it! I hope to get this torrent file and great review friend! In this X'mas this is a good thing to watch!

time to turn on the net flix

Thanks dear for sharing this good work i liked it :)

@talanhorne - Sir you made a nice review today.... I like 3D movies, therefore I will try to watch this at Netflix Sir... Nice you decided to share it...
'Gremlins is a gem of a movie---one that needs rediscovering by our sad and cynical world.'

I just watched this with my 12 year old son. It was his first time seeing it. He loved it! I saw the sin the theater as a kid and still remember a family with little kids having to walk out. This and Temple of Doom are the reason we have the PG-13 rating now. This was rated PG!

Well, it certainly wasn't my favorite movie growing up, and if you've read some of my previous posts, you'll know that I have one adult friend who was so traumatized by the film that he can no longer watch anything scary at all.

But when I watched it on Netflix, I found myself appreciating the hard work that went into making the film. The practical effects were a master study in the art form. And the horror elements were done so smartly. The horror movies of today just can't keep up.

It's easy to see why this film is so fondly remembered.

This is a very nice one on occasion like christmas

Thank you @talanhorne and have a great day.

thank you for putting this here

Actually it's a good movie for the Christmas time. Your review of it is brilliant.

Exceptional article about a good movie for this X'mas time. Nice selection you have made 7 good review of it...!!!

holidays are here time to enjoy this flick

its very cool thanks for sharing :)

Gremlins is on Netflix right now, what possibly can go wrong with that!!!
Hahah actualy was a movie that i enjoyed!!

very interesting time to enjoy the holidays :)
thanks for this recommendation

Netflixing: Gremlins
After reading your review I decided to watch this on Netflixing. Excellent review~

Oh, gremlins! I havent seen the movie since I was a kid. I was in love with Gizmo but terrified of the rest of the movie. I think I need to watch this now as an adult. Thanks for the reminder! I enjoy your posts. I'm going to follow you.

Be sure to check out any of my previous reviews if you're looking for things to watch on Netflix.

haha, its been ages since I see this movie :) 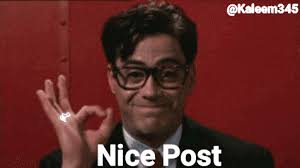 amazing bro thanks for this kind of stuff

Nice and excellent choice of movies for these dates

Will keep the movie in the mind buddy ,Thanks for the update ,sure seems interesting about Gremlins ;)

The truth was that I was looking for a movie that is classic, funny and full of wickedness. You also said that a boy in the movie is close to his house using only his wits and whatever the hand is from the killers. And family objects are used as weapons in sunny hijinks. And the neighbor turns out to be a crazy old man so crazy after all.I need for this thanks for sharing my dear friend.
HAPPY CHRISTMAS

ur writing style is very uncommon ...
do u write any blog ???

Not the water, don't drop water on them! No don't do it.