I’m so done with Apple. Their products have been getting shittier and shittier. Every update brings more bugs, more flaws, and slower performance for older products.

Everybody has felt like their phone mysteriously stopped working whenever there was a new hardware update. It’s a MYTH, it’s a RUMOR, it’s a CONSPIRACY THEORY they said.

No it’s all true, fuck em, FUCK Apple for turning into Microsoft. I’ve been on a mac since the beginning and i’m seriously considering a switch. At least in the phone department. I’m still hard on the mac computer, until someone gives me a better option, but with all the amazing new phones out there, the time may have come.

After admitting this week to purposefully throttling old phone performance, guess what happened to their stock? IT WENT UP! Of course it fucking did, doesn’t matter, people love their iPhone, give me more, gotta have the new one.

I mean look at this performance chart on just one upgrade. I currently run 10.2.1 and my phone is a piece of shit now. The battery dies in half a day, everything freezes, and apple reminds me to install the new update every 20 seconds. Suck a big fat one Apple. 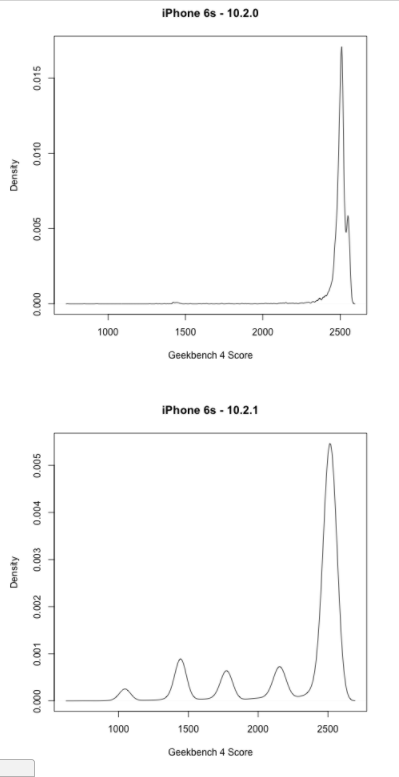 But seriously, should I get the new iPhone X? It blows my mind that people are not up in arms about this. It's worse than planned obsolescence. Really a giant middle finger to all their customers while they wring money out of their pockets.

People doesn't look to the specific characteristics.... People now a days it's incredible unaware of all this. Apple know it and for that they're doing this type of mobile phones... And here you have the reason why Apple it's one of the companies with more succeed.

@woodrow payed 22.5 SBD to @minnowbooster to buy a stealth upvote.

It's gone downhill ever since Jobs passed away. At that point they ceased innovating and just started copying everyone else. I agree with OSX being the best fully compatible OS, I would ditch for linux in a heartbeat but as a photographer Adobe products are a must for me. As for the MacBook hardware it's still good but I have some issues with where they are headed, using dongles on dongles is just not a great experience.

Agreed @fivealive55 dongles are a real pain in the ass. Just like new headphones that only have lightning connecters, useless in any other product without an adapter that you have to pay more money for, again.

That is a lot of hate you expose here buddy although I understand frustration about slow devices all of a sudden,

Apple admits it deliberately slows down iPhones as they get older...

...what does Google’s Android do?

Hahaha that's true @s3rg3 but I had to vent. Just pissed me off every time I try to open something on my phone and it freezes or crashes, etc... and all so that I have to spend another $1000 on the latest one.

A perfectly understandable reaction, yet better get it out of your system than let it boil up inside. If I can be of any help in deciding your following step for Apple devices, just let me know, ok?!

Also me and the group I am a part of, created a dedicated app, for iOS only, this app is called Steemify, we as @blockbrothers build this app. Just download it for free and never miss out on any notification anymore!

And while you're on it, me and my fellow blockbrothers are also a witness as @blockbrothers. If you want to support us we would appreciate your vote here. Or you could choose to set us as your proxy. Thanks for helping ;)

vote boss got me yes

Congratulations! This post has been upvoted from the communal account, @minnowsupport, by woodrow from the Minnow Support Project. It's a witness project run by aggroed, ausbitbank, teamsteem, theprophet0, someguy123, neoxian, followbtcnews/crimsonclad, and netuoso. The goal is to help Steemit grow by supporting Minnows and creating a social network. Please find us in the Peace, Abundance, and Liberty Network (PALnet) Discord Channel. It's a completely public and open space to all members of the Steemit community who voluntarily choose to be there.

I wrote about the same topic today and its pathetic. Instead of iPhone x how about you get Google pixel 3 ? Its cheaper and probably the best android phone out there right now.

That's what I'm talking about @rahul.stan I need to find an alternative. Unfortunately we need to wait a whole year for the GP3

Congratulations @woodrow, this post is the fifth most rewarded post (based on pending payouts) in the last 12 hours written by a Newbie account holder (accounts that hold between 0.01 and 0.1 Mega Vests). The total number of posts by newbie account holders during this period was 3701 and the total pending payments to posts in this category was $2195.04. To see the full list of highest paid posts across all accounts categories, click here.

This post has received a 0.77 % upvote from @booster thanks to: @woodrow.