What will you do if someone gets raped?

Will you stop it and save the lady? Or will you pass through or make your video on your mobile phone, which shows the identity of the person and then be caught up later? 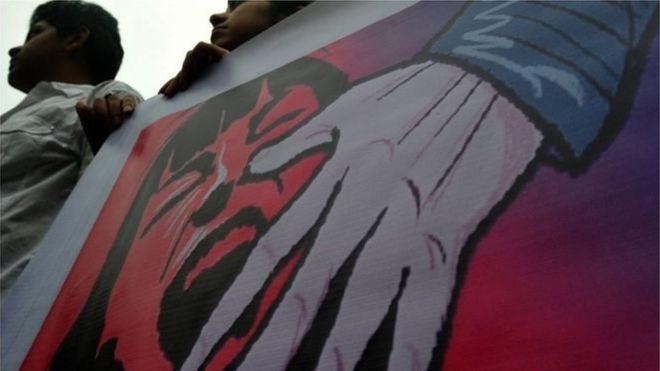 These questions are being asked after a rap with a woman on a crowd riding on a crowded road on Sunday in south coast of South India, Vakakapatnam.

###The video that has been created by a rickshaw, many people can be seen by passing there.

A person reaches there where rap is happening and then he suddenly changes his way and goes away from the pedestrian, perhaps knowing what's going on there.

Police Inspector GV Ramna told BBC Hindi that 'One person made a video, while another person came to call us what was happening there.' He said, 'But till the police ran there, the rap ran away from there. Were there It was identified by the video and later we arrested him. According to a report published in the Indian media, the woman contested her husband and came to the city's northeast. She is told less than thirty years. Some reports say he was 'mentally disabled' while some say that weakened from hunger and thirst that he could not scream for help.

The police said that the affected woman was resting under a tree on the road to a crowded railway station when a person under the age of 25 was attacked. It is said about the person that he is addicted to alcohol and drugs, and is accused of fraudulent drug abuse.

Every year thousands of rap events come to the police in police, but this incident happens on a crowd of two o'clock at noon and nobody comes to help. This shows such an illusion of pathogens, and some people are asking, are we really a country of immortal citizens?
Many people resorted to social media to express their anger and called 'hateful people' as 'hateful'.

Similarly, in December 2012, when a 23-year-old girl was raped in Delhi's capital, Delhi, people expressed her grief and anger. Later, the girl's mother had publicly named her, Jyoti Singh.

Taking a video with your phone is not good enough.

If you see such a crime taking place you must act and try to save the victim.

If you feel you are not big enough or strong enough then at least start screaming for the attention of others and involve them in that way.

When people feel that they have been involved by your attention they no longer feel invisible and are more likely to act.

How one can do this and circulate. Shameless people.... He should think at one point about his own family members and relatives, then what he would have done when some others record and circulate.

never understood how people can do that. record a crime but do nothing to stop it. they pretty much living vicariously through the pain of others.