THE DAY THAT I THOUGHT MY TRUCK MAY BE DYING I understand that when some people look at my truck, they may think it's already dead.

While it may not be pretty, it still gets the job done... or at least most of the time. Recently it started leaking anti-freeze, and I thought that I might be losing it. Thanks to a few steemians though, the beast lives! On a recent trip back from Missouri, the heat cut out on our truck. It was a colder night and suddenly the vents stopped blowing hot air and everything started to get colder. Soon I had @bluerthangreen on the phone and he said the most likely cause was low coolant. Sure enough, I was low on coolant, so I filled it back up and the heater began to work once again. But, since there was still a leak, it didn't really solve my issue.

Thankfully, the @mobile-joat was on his way over to our neck of the woods within the next day or so anyway, so we were able to have someone look at it almost immediately. While he hasn't suggested that I replace the truck yet, it seems that may be his goal, because piece by piece we are replacing it! You can see here that the new water pump at least looks better than the old one. I've seen these parts under the hood before, but I didn't really know the names of a lot of them, so at least I am now learning more too. Here is the old radiator. It didn't take a mechanic to know that it was leaking, but it did take one to replace it! Thanks @mobile-joat! Just look at that shiny new radiator! Not only will I not have to deal with it leaking, I've got the peace of mind that new parts brings. Plus, @mobile-joat came to me and I didn't have to take it anywhere to get it looked at. As I usually like to these days, I tried to absorb as much of the process that I could by watching everything that he did each step of the way. Who knows when I might have to fend for myself one day? This was the third thing that I learned. Notice how @mobile-joat has the jug of coolant tipped sideways. By holding the jug this way you reduce the chances of spilling it everywhere. He took one look at me attempting to do it and immediately showed me the correct way. While I still might not be able to replace my own parts, at least I can properly pour a jug of coolant now!

Just in case any of you missed it and wanted to know a little more about @mobile-joat, here is an interview that I did with him last month. He's a great friend and a very capable man, so we enjoy hanging out when we can, even if I've got to pay him to work on my truck just to get him to come over! FOR MORE PAPA-PEPPER CONTENT, CHECK ME OUT ON SOLA

Gone are the days where i would suggest to anyone to replace their truck with a new one. The new ones are far less serviceable and often far less of a truck.

Water pumps and radiators are really easy to replace. And often need to be replaced, as they are fragile. (and filled with water) So, i do not consider them to be very much of indicator that there is any problem with the rest of the vehicle.

"Gone are the days where i would suggest to anyone to replace their truck with a new one. The new ones are far less serviceable and often far less of a truck." <--- Yep.

Cool! Thanks for that (as always) - I agree!

Radiator AND water pump, what a day. Atleast you drive a bigger car with a nice lofty engine bay to replace all of those items. How many hours did it take and how many miles on the truck?

Its more green to keep an old car running then it is to buy a new one, so kudos to you!

thats half ton of miles for sure. drive that thing into the ground!

The joy of owning an old vehicle and it so pay's to have a friend who's a mechanic :)

That it does! We are blessed by knowing @mobile-joat!

new things always bring a sense of happiness..
I'm exceedingly glad for you sir.
And as its well stated : it's not how fast, it's how well.
So if the car is running fine, it's always the best.

Hahahahahaha .
Dont be worry you will learn all parts and major issues time by time .
Truck is good . its not looking deadly lolx..
@papa-pepper your photos are good .
And its very helpful to you having that much talented and good friends to help you out .
You are lucky .
Keep enjoying your life . best of luck

Wow, you are lucky to have people to come around to work on you truck. I wish I have friends that can do that for me too

Did you learn anything about mechanics? Thanks for the tips, for me that I'm a woman I used to be a mess with my car, at least I learned to keep the coolant level up to date.

Your truck is brand new already, on the inside, by replacing the parts bits by bits as you are doing. Yes, it is always best to tilt it sideways, even when pouring any liquid. It reduces the chances of spilling.
Good to know you it's back on. Ready for more work. I love the way you take care of everything you have. That's a good maintenance culture. They get the job done, so you gotta. Well done Papa.
NB: hahaha don't learn how to replace that yet...hahaha i might start calling you superhuman if you do.

good job...thanks for sharing...i appreciate you..

Glad the truck is now working. Thanks @mobile-joat for the help, machines are generally like that even the new ones could develop fault. I pray for More $$$ to buy new and better one @Papa-pepper.

Oh wow! Glad the beast is up and running again. @mobile-joat's the man! :)

Have had to replace a few water pumps over the years. It can be a bit of a deal depending on the vehicle. :)

I understand that when some people look at my truck, they may think it's already dead.

That was what I was thinking!

That truck is a beast... have/had one but it needs some work itself.

It's a Chevy. Parts are cheap. It's easy to work on. Drive it until the freaking wheels fall off. Then replace whatever's broken and keep driving. That's what Chevy trucks are for.

Friends in need finding friends in deed is always nice. Happy the beast lives on. Reminds me of my first truck, it was a 1991 Cheyenne and I got it used close to 200,000 miles and drove it for several years, still ran fine when I sold it. I really don't think you can beat those old Chevy engines.

I try to drive them until they can't be driven, or give them away when we no longer need them. Thanks @clayboyn!

Well done mobilejoat for being a friend in deed. Watch and learn papa, it won't be long before there are 5 more cars/trucks parked on the lawn, and each one trying to have something different going wrong with it.
You will need another steem site to pay mobilejoat to keep them going

I have an 18-year-old jeep that is still running well. We have been friends for quite a while and when someone says I should get something newer, I just laugh especially when the person telling me I need a new jeep is riding to town in my jeep because his new car broke down. :) Sometimes life is sweet!

LOL - I remember that story! I agree!

Those two parts can be repaired.

We swapped them out so I'm back up and running.

Odds are the cost of the new parts is less than the effort required to repair them. Unfortunately that's not the case where I live, because taxes.

Until it moves you safely from point A to point B, its not dead! Amen to that! That is the way that I see it!

Is not relevant but I found it curious to read something in Spanish, "water pumps" in the blue box, by the way, ¡long life to your truck! 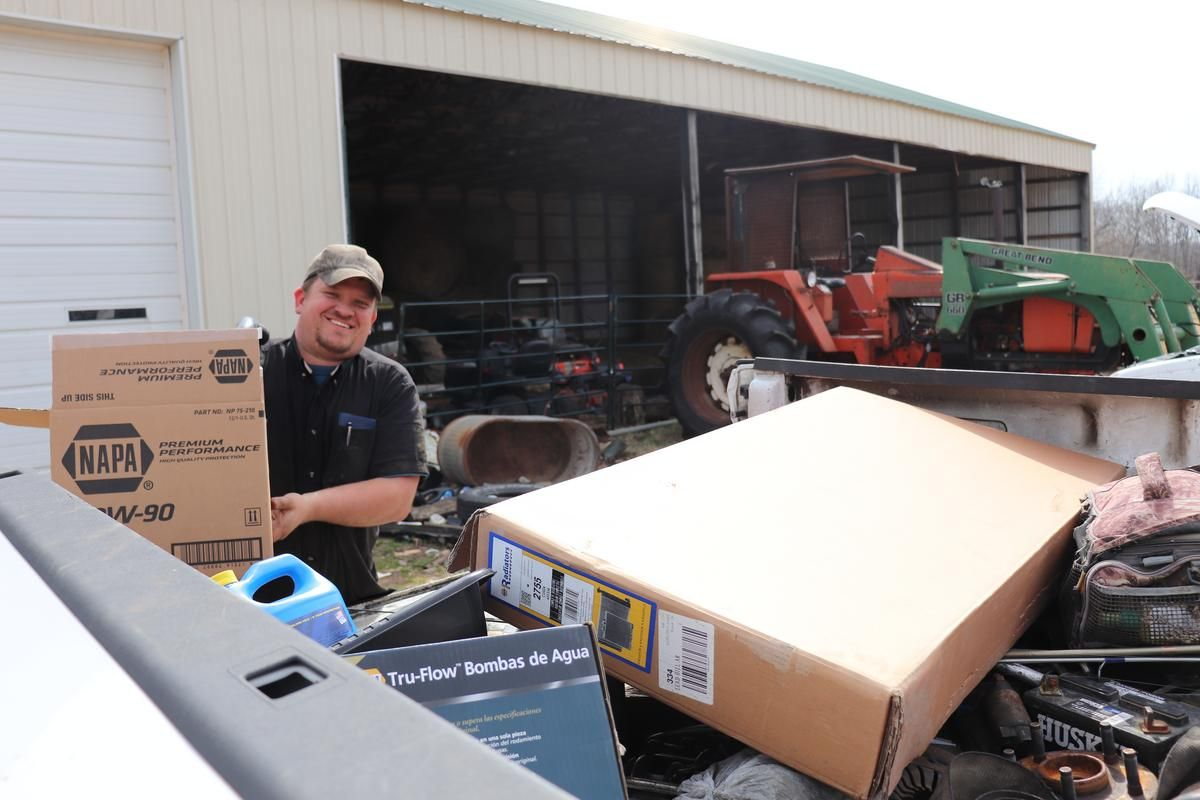 Yeah, I noticed that when we were opening the box too! Bilingual truck, you know?

We have a 2007 Suburban with over 250K miles. Suburbans are known to run forever. I have no problem putting new parts into ours, even large repairs, because I feel it's a solid vehicle we will get many more years out of.

Yep just got the shaft here in town... arghhhhhhhhhhh

I'll have to tell you this one it a warning, plus James from Rt7 Tire told me, before I told him, to stay away. Next time I see ya remind to to tell you that story...

Repair blogs, just like this, are my favorite. Always something that can be learned. Thanks @papa-pepper

your headline is so funny.... lolx