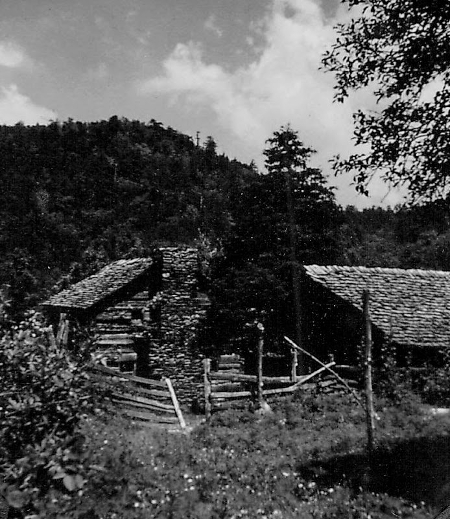 In the summers of 1954, '55, and '56 we took what turned out to be the only three family vacations that we ever had, other than spending a week each summer at Uncle Ed's farm. And each time we borrowed Aunt Anne's car and drove to the Derris Motel in Townsend, Tennessee. Claude Derris and my dad had gone to high school together and remained lifelong friends. After working in Elgin until he was in his 40s, he pulled up stakes, moved to Townsend, Tennessee, bought a saw mill, and built a wonderful motel that backed up to Little River, where we had some fantastic swimming and boating adventures.

But the highlight each year was when Mr. Derris would put four lawn chairs in the back of his old red pickup truck and drive us to Cades Cove. At the far end of the cove there was a private road, which led up the mountain to the only place in the entire national park where one of the original settler families was still allowed to remain after the government took over the area and turned it into the Great Smoky Mountains National Park. The last two living descendants of the original settlers were the Walker sisters.

Mr. Derris had been their main connection to the rest of the world for quite a few years. I don't remember how he first became connected with them, but he was about the only non-related person that they ever allowed to come up to their cabin, high on a mountain overlooking Cades Cove. Just now, in recalling these memories, I am for the first time coming to understand what an honor it was to be allowed to visit these amazing women, who were still living in the log cabin in which they had been born and which had been built by their grandfather. You see, we were about the only people that Mr. Derris ever brought up to see the Walker sisters. It was his friendship with my dad is why he did it.

The day before our first trip to their log cabin home, Mr. Derris had to drive up to see them and ask permission for us to come. And on that first visit, only Louisa came out to visit with us, while her shy sister hid in the cabin. They were both in their 80s by then. I don't remember much from that first year's visit, other than Louisa's sister hiding and us drinking some of the coolest, best tasting spring water I have ever had. Maybe it was that well-used shinny metal drinking ladle we shared that made it so special.

The next year when we went to see the Walker sisters, they both came out to see us, and then invited us into their house, where we sat in the big, open, main room while Louisa read some of her poems. That is how she earned a little money. She wrote each poem on a post card and sold them for $1 each. I still have a few of them somewhere. I'll have to see if I can find them.

That's an interesting experience with living history you had. I wonder how many people were allowed to stay where they were when the US government nationalized all that land for national parks. I remember my dad telling me about how my great-grandfather had to leave his homestead to make way for the Olympic National Park. I'm sure he wasn't too happy with that, but it would all be clearcut now if it hadn't been protected.

Now that your story is on the blockchain, it's part of an uncensorable history that will be available to future generations as long as the blockchain survives. I've been thinking about this lately. Not only is it getting harder to censor news, but also to rewrite history.

I'm glad that you pointed that out about not being able to alter history once it's on a blockchain. If you read Homo Deus and agree with its conclusions about AIs, this is even more encouraging, because my guess is that an AI would trust things on a blockchain more than on a stand-alone Website.

And that's a really interesting tidbit about your great-grandfather. That's a story that maybe you should document :-).

I've had a similar thought before about AI. With a centralized website it's harder to verify when information was actually published, so an AI would either place more value on blockchain information or timestamp information with its own blockchain as it comes out. I haven't read Homo Deus but it sounds like I should.

Unfortunately, that's the only information I have about that particular event, and my father and grandfather have both passed away. The only person I know who might know more is one of my cousins who has done a lot of research on our family history. Interesting fact he found out, we are actually related to Solomon Northup, the free man who was captured and enslaved as chronicled in the movie 12 Years A Slave.

Anyway, I think blockchain + AI will have the potential to build a very interesting picture of human history that would be hard to accomplish with only human researchers.

... so I just checked out Tau Chain, and now it looks like I've been sidetracked from writing and more today because Tau Chain appears so interesting that I've got to learn more ... thanks for the tip, I think :-)

Oops. Well, I hope it doesn't have you sidetracked for too long.