Husbands…if you’ve been going through a very rocky spell with the wife lately, and suddenly you notice a new plant guest in the house or in the garden, …”the lovely Oleander”, then perk up your ears … raise your antennas… engage the radar…be on the watch….and don’t drink any strange brews!! The wonderfully beautifully enchanting “Oleander” is in fact an extremely poisonous plant, whose leaves, can be used to brew a deadly concoction which in a matter of hours could bring a poor bloke into cardiac arrest….and make it look like the work of nature....in fact, ...old wive’s tale has it that in ancient days, wives who came to despise their husbands for various reasons, and who could not avail themselves of the courts or any law system whereby they could be released from their unjust or unfortunate marital situation, would often or at times resort to this M.O. that is, brewing their "beloved" a nice cup of tea, after a hard day's work, and waiting for it to have its effect, thus getting rid of their "not- so-better halves"... NOT suggesting anything of the kind, mind you!!...however I did find the following tid-bits interesting: -The Oleander ( Nerium Oleander), is an evergreen plant that belongs to the apocynaceae family.

-It is very prolific in the Mediterranean countries, as it thrives on very high temperatures, whereas it suffers slightly when temperatures drop too far below freezing

-It is a highly toxic plant, not only for humans but also for animals. Not only for cats, dogs and cows, but even horses, after injesting some of the plant or leaves, have been known to suffer from sudden cardiac arrest....so, yes, it is strong enough to kill a horse!!

- All parts of the plant are poisonous: leaves, bark, flowers, etc. In fact it is highly recommended to avoid using its wood for camp fires, as even its fumes could result fatal.

- The main reason for its toxicity are the " Cardioactive Glucosides " which affect the heart and in very minute doses could even be somewhat therapeutic, but in higher doses ( as with the Oleander plant ), can result fatal.

- If handling this plant in any way, one should make sure to use gloves and wash hands thoroughly afterwards. Despite all these negativisms however, the Oleander still is and remains a beautiful and enchantingly romantic looking plant whose beauty has enhanced many a landscape or painting...so as with other valuables... Hope you enjoyed these tid-bits...to make you happy and keep you safe!

First pictures of knives and now this? Hmm.....

The colors are indeed spectacular...here near Italy they're all over the place...a real treat to the eyes

There is a variety of Oleander with white flowers.
Inhaling the vapors that shed some of these boiled flowers in water will help you a lot in case of Sinusitis. 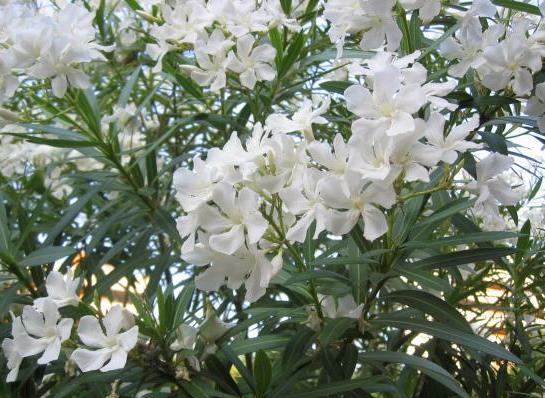 Wow that is beautiful plant! Who would have known.

I know...I was shocked when I heard about it...

I did not know the leaves of this plant were toxic. Thank you !

Who would have ever thought,eh?

There are so many poisonous plants and (not only) in the world, why you've picked this flower particularly? O.o

I was stunned by it's beauty...starting looking up info on it n was shocked to find out how deadly it is...

Why only husbands tho? What about wives? :)

You're right....I guess I was seeing it from the wife's point of view...

All good, I liked the article anyway, good job ^.^

Reminds me of an old show from the 50's when every living plant in the back yard where a woman lived was poisonous. The vegetation would kill anything it touched. Her father did this to keep her alone from unwanted suitors. Well her suitor touched it and became like her. I think it kept him from cheating. Don't remember the name of the show. I also think of he insurance you would need to carry in case an outsider touched this plant. Thanks for an intriguing blog.

Mamma mia! I will now make a new rule no pink flowers in my house!😎😂😂
Thanks for the update @lelabird60, however it such a beautiful flower!

Wow! I’ve always seen this flower and had no idea. I really enjoyed reading your pisting, your writing is relaxed and fun. Thank you for the info, I’m divorced, but always good to know how to make a ‘special tea’ lol just kidding😊😊😊

THIS IS SO AWESOME ....MIND BLOWING

they are actually very lovely, especially when they have grown large and covered in blooms, and hummingbirds seem to do just fine with the flowers. I have great memories of a couple of places with long rows of them.

They really are gorgeous aren't they?

Why such a harmful plant can be find in everywhere? Shouldn't it be grow in places under control of certain people? It can harm a life easily!

Since it's soooo common in these parts, it would be impossible to "control & regulate" it...

Absolutely... Next time when my dog decides to munch on some weeds while we're out and about, I'll be even more worried knowing that a pretty much normal looking flowers can be poisonous.

I'll keep an eye out for this concoction.

The largest mass murders are women.
But, they are not in the record books because they didn't do it directly.

These women would go into town, and get all the women together and then talk about how easy it is to poison that no good husband. Such as you can boil the cyanide out of fly strips.

And so, towns where these women would visit would suddenly have a lot of deaths. Then, off to the next town.

Holy cow!... hard to believe, eh?... guess there were a lot of lousy husbands around back then...

Love them! Such a contrast that it's a poisonous plant

I love them too...they're very romantic looking, aren't they?

They are! We need portion of those photos in this cold winter time :)

That's unreal. It's beautiful, I wouldn't have thought it can kill you. Great post @lellabird60, following

The Netherlands are to cold for Orleanders, so I only have to look out on holidays. t
Thanks for warning me.

Good to know, I'll keep one eye on the garden.

Beautiful and dangerous!
My parents always had a beautiful one in the garden, and I remember me and my brother where scared even to touch it!