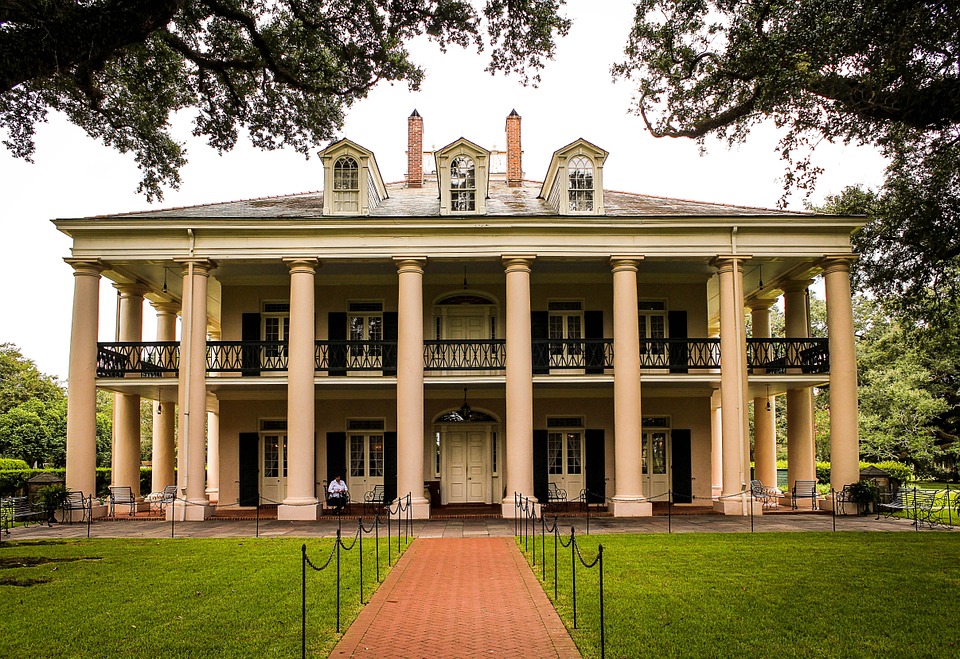 The main house was built for the Roman owners from 1837 to 1839 and took nearly three years to complete. It was a gift from Jacques Telesphore Roman to his bride Celina, although it is rumored to have been designed by Celina's own father, Gilbert Joseph Pilie. Constructed mainly by slave labor, the building materials were mostly found on the plantation grounds, although finishing touches were imported from other places in the United States and Europe-most likely France at the time. It was for Celina that the back oak alley was planted so that she would feel that her new country life on the plantation could be just as grand as what she was used to from living in her father's house in New Orleans.
(

)
The house itself is built in the Greek Rival style and while grand both inside and out, it is surprisingly small on the inside. This is due to the thick walls that provide insulation for the inhabitants during the hot Louisiana summers. When the weather got too hot, or humid to stay inside, the family and their guests would move to the lounge chairs and rockers that line the truly magnificent porches that run the entire length and breadth of the top and bottom floors.

The ground floor is comprised of several sitting rooms and a main dining room of which the most notable feature is the large fan suspended over the dining table. The fan was manually operated by a slave whose job it was to stand off to one side and pull the drawstring for the fan all night, or at least until the family and their guests were done with their seven course meal, and coffee, and tonics. Less important than keeping the diners cool, the fan was mainly used to keep the flies off the food, drink and diners. The top floor of the house is all bedrooms, with a personal sitting room for the lady of the house. The master bedroom is astonishingly small for our modern standards, but the quality of the furniture cannot be argued. Most large pieces of furniture, such as beds and armoires, were made specifically for the room and weren't moved with the inhabitant. Furniture stayed in place and a new set was purchased with the new home, for wealthy families. The average tenant would take what furniture came with their new rooms.

There is also a nursery, with several very small beds, a crib and some child size furniture.
There are two more bedrooms upstairs that would have been used for distinguished guests, if there were no older children occupying the space at the time. It was not unheard of for guests to stay for several weeks to several months at a time, travel being so arduous at the time, so guests were usually lodged in the tenant houses to the east of the property.

After the Roman Family the plantation passed to several owners before finally coming to the Foundation that takes care of it today. After the Roman Family it was part owned by Hubert Bonzano in the late 1800s, then Jefferson Davis Hardin in the mid 1900s, who restored the main roof and saved the house from demolishment. The final owners to live on the plantation were Josephine and Andrew Stewart, who maintained renovations to the house and the gardens.

This post has been ranked within the top 10 most undervalued posts in the second half of Apr 30. We estimate that this post is undervalued by $14.37 as compared to a scenario in which every voter had an equal say.

See the full rankings and details in The Daily Tribune: Apr 30 - Part II. You can also read about some of our methodology, data analysis and technical details in our initial post.

Nice place... but could you tell me about photos above ? Sorry I do not mean offended, I ever saw the same picture posting on steemit. And sorry again, do you take that picture by yourself ?

Hello! The static pictures in the article are copyright free images from pixabay.com, the video is made of my own pictures taken from the visit to the plantation.

Yeah....that is...that foto from pixabay, thank you for remind me. I do not have negative intention about your posting, just wondering that, I have saw that picture somewhere ! :)

No worries! I love pixabay.com because they tell you which images are copyright free, which are in the public domain and which ones you will have to purchase.

It is! I enjoyed my visit there.