Just how many civilizations existed before us? The “oldest” civilization that is widely accepted at this time is the Sumerian which is believed to have existed around 4000 BC. Not everyone agrees though since several other pieces of “history” are not accounted for. The giants mentioned in the Bible, the “fluvial” erosion in the body of the Sphinx in Egypt that could not have occurred before 10,000 BC, the Nephilim mentioned in Genesis (6:4) who took earthy women for wives who gave birth to the “giants”, the Anunnakis - believed to have created humans by altering ape’s DNA and ruled over earth for over 400,000 years.

Genesis story of the Fall of Man

And the serpent said unto the woman: “Ye shall not surely die: For God doth know that in the day ye eat thereof, then your eyes shall be opened, and ye shall be as gods, knowing good and evil.” And when the woman saw that the tree was good for food, and that it was pleasant to the eyes, and a tree to be desired to make one wise, she took of the fruit thereof, and did eat, and gave also unto her husband with her; and he did eat. And the eyes of them both were opened, and they knew that they were naked; and they sewed fig leaves together and made themselves aprons.

And he said: “Who told thee that thou wast naked? Hast thou eaten of the tree, whereof I commanded thee that thou shouldest not eat?” And the man said: “The woman whom thou gavest to be with me, she gave me of the tree, and I did eat.” And the Lord God said unto the woman: “What is this that thou hast done?” And the woman said: “The serpent beguiled me, and I did eat.” And the Lord God said unto the serpent: “Because thou hast done this, thou art cursed above all cattle, and above every beast of the field; upon thy belly shalt thou go, and dust shalt thou eat all the days of thy life. And I will put enmity between thee and the woman, and between thy seed and her seed; it shall bruise thy head, and thou shalt bruise his heel.”

Therefore the Lord God sent him forth from the garden of Eden, to till the ground from whence he was taken. So he drove out the man; and he placed at the east of the garden of Eden Cherubims, and a flaming sword which turned every way, to keep the way of the tree of life. Genesis – The Fall of Man

The story of the creation and fall of man revolves around two Sumerian “gods” – Enlil and Enki. Both were the sons of Anu the supreme god of the Sumerians on earth. The story goes that the Annunaki who were responsible to tend the fields of crops and of gold (minefield) for thousands of years got tired and staged a revolt against their rulers which forced Anu, the supreme god to consider their demands. The solution agreed among the ruling gods was to create a “new man” who will replace the Annunaki workers in the fields and mines. This was accomplished by Enki, who was believed to the geneticist god.

The “creation” of man wasn’t a one-time event. It has spanned over hundreds if not thousands of years considering that the Annunaki ruled over Earth for more than 400,000 years. Over time, a debate over the fate of men broke out. Enlil's faction insisted to keep man as slaves while the other faction headed by Enki want to "free" man from the bondage. While the debate rages on, Enki secretly carried out his plan without letting the other gods know infusing free will and consciousness into man (DNA). Enlil was enraged when he found out about it and decided to punish man.

There is a Sumerian tablet that describes an event where man revolted against their masters. The result was an abomination. A massacre never heard of before. Interesting though, this never popped up in any subsequent literature not even in the bible. Sumerian’s Fall of Man.

Who is Yahweh, Satan and the Snake in the Garden of Eden? 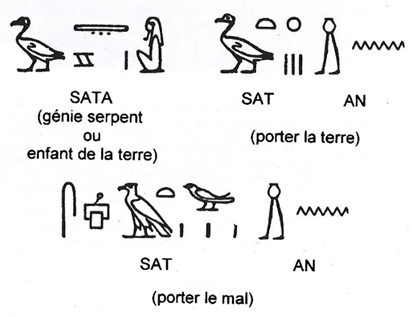 In the Sumerian text, Enlil is the great administrator of the Sumerian civilization on earth. Not surprisingly, Enlil was also referred to as “Yahweh” the supreme god and "creator" of man after he overthrew what was believed to be his father. It should be noted that while Enki "made" man by modifying his DNA, it was Enlil's idea to replace the Annunaki workers with a genetically modified man. It was also Enlil who commissioned the project.

According to the Sumerian text, the god who ruled from heaven, the great SATAM, asked his half-brother Enki to “negotiate” with humans that were already existing on earth. As a result, he (Enki) became a “friend” of the humans. Enki had the appearance of a lizard hence he was referred to as the “Serpent” in the Sumerian tablets.

If you are familiar with the Christian bible, it’s clear that Yahweh is another name for God and Satan is the anti-hero. You may be asking then, “How in the world did we mixed up Yahweh, Satan and the Serpent? Was it a deliberate act or the result of mistranslation?

This “lost in translation problem” is widespread throughout human history. That’s partly due to the limitations of passing a story by word of mouth or even written text in another language. If you don’t believe it, they playing the game of “message relay” with your friends. Enki for example, is Prometheus in the Greek mythology. Enki did teach humans how to use tools and other technology of the gods but there no mention of "giving fire" unlike in the Greek version.

It is also worth noting that there is a very strong resemblance between the Greek mythology and the Sumerian text. Most Greek mythologies if not all are the exact copy of the Sumerian stories with little variations. It’s not a far-fetch to theorize that the Greeks may have heard of these stories by word of mouth. The gods of Athens for example, has one on one equivalent in Sumerian. Even the story of Zeus overthrowing his father, the Titans, is a photocopy of the Sumerian story of Enlil usurping the throne of this father.

Related posts:
Part 1: The SPHINX; Part 2: The GARDEN of EDEN Wasn't a PARADISE;