Learning to Deal With Negative Feedback or Public Criticism..! 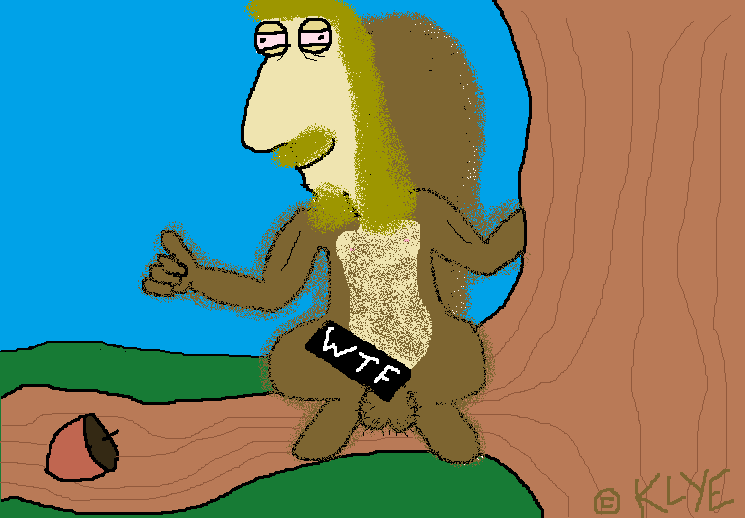 Beneath this tough, sexy, rugged and weathered exterior dwells a sensitive forest creature..

Certainly had moments in life where an outside observer would almost swear a younger @KLYE may have had some sort of emotional learning disability. Even from a young age those tasked with teaching me in the classroom would often comment to my mother that while they fully observed I possessed an incredible amount of intelligence.. an unfortunate effect that came a long with that was that unless I'd convinced myself of a genuine want to learn something it's next to impossible to force myself to sit and learn it.

Knowledge must have real world application else it's just taking up space in my grey matter.. and for a half baked mind like myself.. need every viable brain cell filled with it!

If You're Doing Things on The Internet
People WILL Tell You That You SUCK!

A bit earlier this week a fellow seasoned member of the STEEM community decided to verbally lay into me in one of the lesser known STEEM chat servers, coming off as what I'd have to describe as extremely critical and perhaps even a touch condemning towards the last few little Steemit mods that have been recently pushed out by yours truly.. Stating that I should be using my time better and focusing on my other projects.

Naturally my knee jerk reaction was to tell him to go f**k his hat (although I'd have to be really angry at someone to actually say this) and go learn to code himself if he thought my work was horseshit.. but what later donned on me is that his feedback had found it's way through my emotional armour, Something I've constructed over the past years 20 some years in order to not come off as a complete hyper sensitive panzy boy.

The sad truth of the matter was that my feelings had been a bit mauled by this feedback. Here I was thinking to myself "Man, people are really gonna love this functionality" only to have strips ripped off my ass for not spending the time burned on the smaller projects on my larger ones. Will GLADLY be the first one to admit I've got waaay to many things on the go on the moment for one mere insomniac mortal/creator coder type to efficiently juggle, but, upon successful beta tests / launch of a few of these feats of programming shall have time to restructure the way my working hours are allotted as well as take on some other interesting projects that users have come to me asking to create for the network.

The Steemit.com mods were sort of viewed / internally justified as a short break on the serious coding of my main projects.. Mainly to refresh my head and mentally prepare myself for the final stretch of @tippy development. Which from what I've gotten written so far ended up being a fair bit more complex than I'd anticipated.

Unfortunately around a solid 7 weeks behind on development from where I'd liked to have been on this project, however I'm confident that once I'm able to set up an office area I should be able to maximize my productivity and finish @Tippy in good time to move onto focusing on my other STEEM projects.

Although I've not made mention of it until now I'm in the process of moving in with the lady friend! Moving is stressful times for me generally, however won't let it distract or throw me off my programming endevours. Rapid lessons, evolution and changes seem to be manifesting themselves to those who are looking to set themselves up to receive their full opportunities.

I highly appreciate the STEEM user mentioned in the above text for voicing his concerns and criticism. While initially twas not taken lightly and perceived it as being quite offensive, after giving it some time while processing it all decided that I may of in fact gotten distracted on the Steemit.com mods a bit more than I should have when I should be working on @tippy, rebooting/fixing STEEM.GLOBAL, Revisiting building a new VR capable HTML5 streaming application for Streemit.online and the bearing down on Steem-Roller engine/GUI finilization to get these services launched.

Wish me luck! Also on a side note.. if anyone who also happens to be a code wizard wants to join forces I could pay you in crudely drawn MS paint art, STEEM or SBD if you wanted to put some hours in helping me code some of this stuff! Or perhaps you're an aspiring young intern type looking to get your foot onto the programming path. I'm a terrible teacher but always willing to help!

Focus at the Center, Burst Through the Chest!

wow that was good of you 10k lol
Now if only 10k people could see this, I would be a steem whale haha
https://steemit.com/atm/@waynevan/how-i-tip-my-atm-machine-the-simple-3-step-guide

Your MS paint skill is sick!
:)
Some only know to criticize.
Keep up your great work nonetheless @klye!

Good thing haters are irrelevant. The irony of haters is that they are actually your biggest fans because they are so into your work they look too deeply.

That face at the end lol

As far as I can tell, you don't have any reason to owe anyone your time here. Your reaction to this which you self-described as "offended" seem like a reasonable reaction to an entitled mindset. Kudos for using it for positivity.

Good luck with the move, that can be a stressful situation. Resist the urge to slide into any sort of habitual existence and keep a focus on self-improvement in the things you deem important to you, lest familiarity or stagnation breed contempt.

Your work is very appreciated kyle

Jk, keep up the good work 🙃

Well, on the Internet you learn pretty fast not to pay too much attention to these things / negative feedback. The online world is full of trolls, and even worse. Some people even come from a criminal background; they don't care if they hurt your feelings (some of the stuff I have seen...). In fact, they will try to upset you and shock you as much as they can. If you are getting results with your online projects, then that is what matters. If not, try to find out why. But don't take haters and trolls seriously.

Not a professional dev, but I could help you with some PHP if you're using that.

Negative attention, is still attention... SOME people (who will remain nameless) have managed to build phenomenal public personae and rise to unforeseeable heights, based entirely on how many people find them disgusting.... just sayin

Too much Howard Stern and 4Chan? :D

"Hey now"(sic), at least the former of those two has been an anti-censorship champion. Even if he chose to do it with butt jokes.

A need to look at all feedback good or bad Is still positive a learning curve we are on the same boat. If you need help with graphics images ect.... just ask!
Nice to read from someone who Is genuine.

Sometimes taking criticism can be tough.
I've noticed that it's those times where the criticism I've recieved is a direct reflection of my own thoughts, that it tends to hit home hardest.
Btw... I'm glad you did a night mode.
What kind of help do you need coding? We'd definitely be interested in getting involved. Would love to add our mark to the platform. We already talk occasionally on chat, you can message me there.
Keep up with the great work, the community appreciates it...even the small things.

As long as you are not identified with your work, other people's praise or criticism would not matter to you.

Sometimes people just look at things differently and tend to react by criticizing the person. Constructive criticism can help but when it starts to get personal, nothing good comes from it.

keep on the @tippy project running, and show who is the champ.

Great post !
Resteemed this is pure gold, thanks for sharing!
Im following you !

Best wishes & Congratulations @Kyle You are a light! :)

Haha, well I always say that there is a reason for everything. There must be a reason someone would criticize you in the first place, so sometimes one should listen :)

Although I've not made mention of it until now I'm in the process of moving in with the lady friend!

That is much more stressful than anything coding or steemit could throw at you. My hat goes off to you sir!

I am fascinated on how many projects you are working on at the same time. :D On the other hand I can totally understand how easy it is to get distracted. I am a programmer myself and I often jump from idea to idea and nothing really gets done. And I know that my attention is drawn to so many interesting things, that this will never change. So I decided to focus and very small projects, LVPs, prototypes. It's very more likely to come to result for me.

For the amount of upvotes your mods got I think many people find them useful. And I also think that tippy would be great for extending steemit to other platforms so more people discover Steemit and join. Keep up the good work.

Criticism is different. It's one thing if they criticize something to fix it. And another thing - when to offend the interlocutor and show themselves smarter than him.

In the second case, you should not worry. If the opponent is smarter, he would have developed something better than you :)

Good posting. thanks for sharing. I followed ya

Hello klye
I'm a newbie here, but very interesting analysis , so true!
Upvoted, and restreem ;)
Take a look to my first presentation post @geemo-from-paris
and let Steem together ;)
Love from Paris
G-Mo'

And I think the same as you did, but I was afraid of the public rebuke, to write an article on this subject!

Hi Kyle, I am new to steemit and have been sad that I didn't receive but a few "Welcome to Steemit" after spending two weeks trying to decide how to present myself and working many hours on art to use in my introduction which I have since removed.

it has taken another week to decide to ignore being ignored and move forward in my desire to share and learn from the Steemit community.

I appreciate your post, it gives me strength. Thank you! What languages do you program in?

Sounds like you took the criticism like a champ. Speaking for myself (and everyone else), we can't wait to see what @tippy has to offer. Keep it up.

I like how your bad marketing attempt doesn't even feature good grammar and proper capitalization. Low effort :/

You can do better.

Upvoted and resteemed this one lol, I like the fun blogs keep them coming. <3

The art of trolling 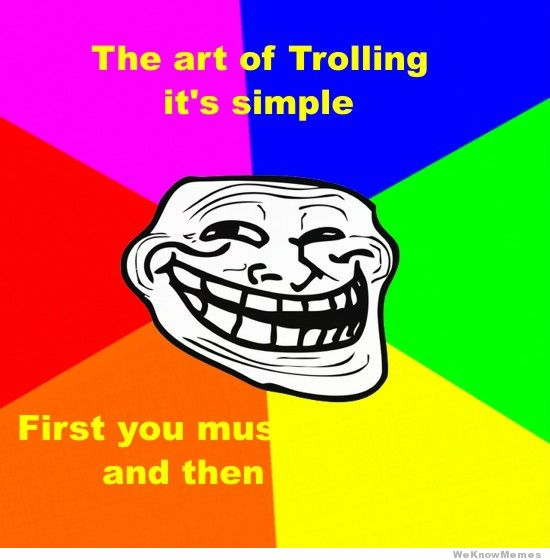 It is the Internet. Sooner or later, someone will try to troll you.

Don't let trolls hold you back. :)

Hey, did that night pull request get approved?

I want a dark background, too!

I love that photo

Dude, this is another great post. Two things I thought were great points. 1. Emotional armor is so very important. It takes some rough patches to build up, but is needed to resist discouragement. The second thing is how you took time to analyze if the comment was correct and looked at it logically and without emotion. That is how wisdom occurs. Great stuff man, keep up the good work.