As a first post here (on Steemit) - this is a little introduction.

I like (even love) to know. In fact, for me - knowledge (and acquiring it in various ways) is the best form of entertainment. Years ago it was music. Music was everything - an aim in itself. But finally music became one of many forms of gaining knowledge ... much exploited already. And so i abandoned it (not completely), to focus on other things that could help me to further progress.

I was fortunate to have a wise father who was eminent scholar. And a practical mother - university librarian. Because of these, from the very beginning of this life i had almost unlimited access to many inaccessible sources of knowledge (people, art, books, papers, records, tapes, and so on). Thanks to that, in the early seventies - being a primary school student - i have collected on tapes whole discography of The Beatles with all covers, photos, and artwork - not just 'British' discography, but also 'American' and 'Japanese'. In those days it was really a huge achievement for anybody from behind the so-called 'Iron Curtain' - especially for such kid i was then - rock'n'roll music was simply forbidden in my parts.

Half a century has passed. My interests changed constantly, and my collection has grown ... quite. I have no more space from a long time. Only virtual. Moreover, items from my collection were used extensively by others as well, who 'forgotten' to give them back, and many was simply stolen.

Also, i'm getting old, and times are 'interesting'. I began to worry about the fate of my library. Particularly, since it isn't 'common' library, but unique Library of Knowledge. It is now my mission to preserve all scholar materials of my collection. I may die tomorrow, but library must survive. For the benefit of all.

So here i mainly am for sharing my whole library.
And maybe i can be useful for something else yet ...
Will see.

I'm NOT doing it for money.
I do NOT need any money.
And i am NOT asking for any donation.
Never ever.

Let it bring an advantage to everyone. What is 'dharma'?
It's an ancient Sanskrit word and its meaning depends on the context. Generally it means 'truth' or 'knowledge'. But written with a capital letter - Dharma - usually means 'teachings of the Buddha'. And such is its meaning in this case.

So this is my collection of Buddhist teachings. In majority these are books (*.pdf), but also images (*.jpg), lectures (*.mp3) and videos (*.mp4). All these things i have collected over the last thirty years and come from various sources - mainly bookstores and libraries, but some of them i obtained by attending lectures and initiations, and some founded in internet.

At some point - when quite a lot of this has accumulated - i began to organize the library for my own use and convenience. But later - because of importance and rarity (often inaccessibility) of such materials and also being under its influence - i decided to make it public. Not that i was going to throw pearls before swine. It was rather from the inner need of doing something good. And this (library) is the best thing i have to offer. I'm aware that subjects raised in these works are very unpopular. Hardly anyone is interested in it. Someone really must be in great need, if searching for such things. Now one will have better chances to find.

This Dharma Collection is still work in progress - i have published only one-tenth part so far (on my webpage), and new things are still coming. So this probably will have no end. 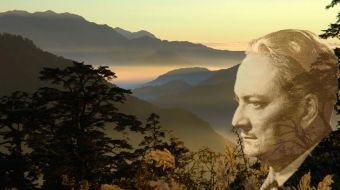 First i will post my collection of Manly P. Hall's lectures.

Originally - these are recordings on tapes. They were converted to digital form about 15 years ago. Because the tapes are very old and was used extensively through half a century - the audio quality of some of them is poor. I was trying to do my best to restore the sound, but often it was just impossible.

I uploaded them to YouTube as *.mp4's few years ago. I thought, this is the best option, because of popularity of YouTube and free uploads of any size with unlimited storage space. Unfortunately, it appears that storing on YouTube isn't good. At least not for long. Files are disappearing, users are restricted, channels are suspended, blocked or even deleted.

So i was happy to hear that there is such a thing as Steemit and that it uses DTube, which seems to be secure and even cares of linked youtube-videos. This would be excellent. I'm just going to check how much truth is in it. And by the way - this will be great opportunity for me to do another one attempt of sound-restoration - now, after so many years, there is a lot of new audio-gadgets, with which i might be able to achieve better result. Hope so. This may take me a year or more, but the thing is worth of it. Then i will upload all lectures to DTube in renovated form. Such is my plan.

And for the time being - i will simply re-post articles from my webpage.