IGNIS ICO: What are your options?

The IGNIS ICO starts soon and I see a lot of questions on what you should do during the ICO/Snapshot phase. I tried to summarize some scenarios on how to invest during the ICO and what the possible outcome after the snapshot in Oct/Nov will be.

These scenarios also show you until when it is rational to participate in the ICO (maybe you do not have the chance in Round 1 or 2) or when is it better to wait for the snapshot.

I take no responsibility for any actions you take based on this post. I need to make some assumptions in order to make predictions. And as we all know, the market is not just mathematics, it's also psychology and therefore not always that easy to predict...

Let's start with the information we have on the ICO (from www.jelurida.com/ico). I took this information and calculated the total NXT which is going to be spent in each ICO round to calculate an average JLRDA price (in NXT) during the ICO.

Now let me show you some possible scenarios on how to invest in the ICO. These are not all options you have, but some of the most common. Depending on which scenario you are following, you have a stock of NXT from which you spent a certain amount during the ICO phase (or you don't spent any, see scenario 1). Then you will see the total NXT you will have after the ICO rounds, which you will keep for the snapshot. You will also have the total amount of IGNIS either from the ICO or the snapshot. In the end, you can see the total value of your original 100'000 NXT investment either in NXT or USD. I recommend comparing the NXT, since the USD is always changing.

(in order to compare the end amount I converted the JLRDA/IGNIS amount to NXT using the average ICO price for 1 JLRDA, see above) 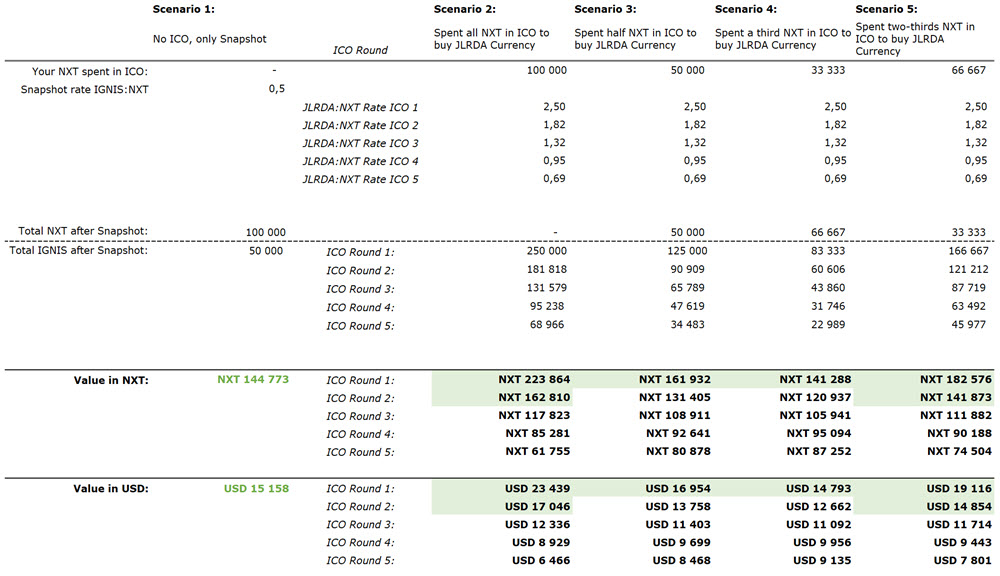 All of these scenarios work only under the assumption that the JLRDA/IGNIS price in NXT is stable over time. As we know, this is not true. IGNIS could be worth more or less as the average NXT calculated here. But based on what you think where the IGNIS price in NXT will go you can decide which scenario is probably the best for you.

P.S.: In my opinion it is not important if the NXT price in USD drops after the ICO or not because I assume that the IGNIS price is connected to NXT and with these scenarios I only show you where your investment will go, valued in NXT (e.g. I will have more NXT then before).

I hope I could clarify some things regarding the IGNIS ICO. I give no advice on what you should do.

Thank you for reading:)

Awesome Insight - On the post and info on IGNIS - For more info on NXT, ARDOR, IGNIS and the JLRDA tokens please read my post https://steemit.com/ico/@krytonika/nxt-ardor-are-having-a-child-names-ignis-ico-august-5th-2017

If you were a crytpo noob like myself and currently had 500 ARDR and 500 NXT in his wallet.

What would be the most ideal scenario to wager on the new ICO?
Getting conflicting info on whether to switch ARDR to NXT or hold it.

is ardr being considered in the snapshot. i thought was only nxt. i hodl 25% ardr 75% nxt atm .. i cannot figure how to pull the coins out of polo. my test withdrawal gave me responce "please wait for (something?) to generate NXT code" .. wat ??

And no, Ardr is not considered. Only NXT.

Nice analysis. I have also posted a detailed analysis in a two part series: https://steemit.com/cryptocurrency/@cryptomaster007/ardor-platform-ignis-ico-part-1-of-2

I am still confused as to what to do, do I buy NXT to buy IGNIS or hold the NXT bag to get the free Ignis at snapshot.. it's all a gamble but I am sure I will figure it out.. Great post.

Well, what I am trying to say is that if you follow one of the green scenarios you are doing good:)

BuY NXT -'and buy it now before it cost you even more money https://steemit.com/ico/@krytonika/nxt-ardor-are-having-a-child-names-ignis-ico-august-5th-2017

Yes but it is likely that NXT is rising again before every ICO Round.

Nice article. I was about to post a similair post. Only invest in ICOs if you did the best possible research you can do and really believe in the future of the project. Wetter you're a short- or long term holder you should know what you put your money in. Do you know this interesting site? https://www.coincheckup.com I don't know any other site that gives such good inisghts in the team, the product, advisors, community, the business and the business model, etc. Go to: https://www.coincheckup.com/coins/Nxt#analysis To see the: Nxt Report