Time to go inside. So this is the view from the door. 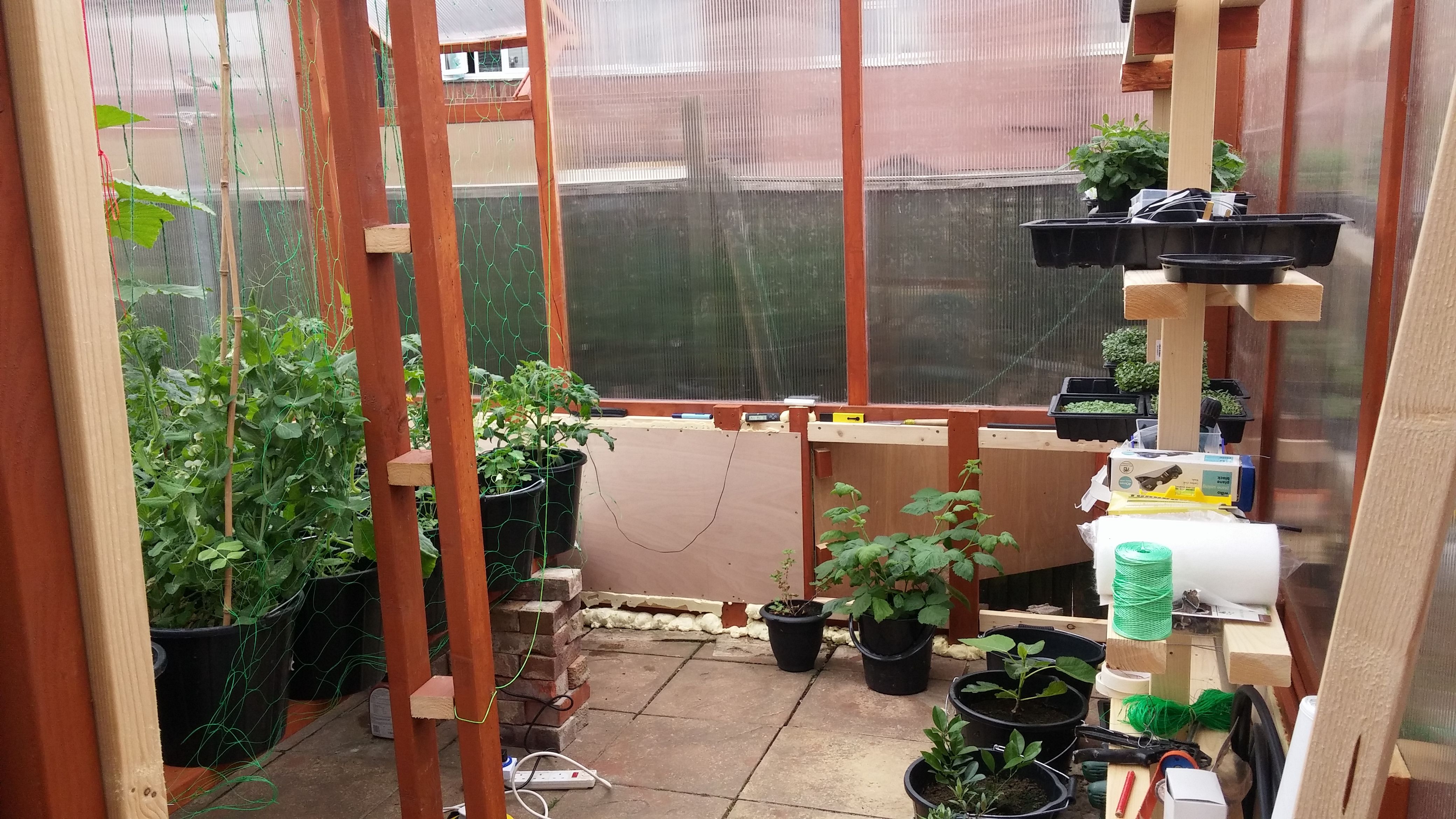 On the left there are 3 rows of my version of dutch buckets, 21 in total. Most of them have 2 plants / bucket, I know they're a bit too crowded, but I expected only one plant to survive/be kept from each bucket; of course, just to spite me, they all survived and in the end I didn't remove the extras. Most are tomatoes, about 6 different varieties and if it gets way too busy in there I might cull half after the first crop from each. I also have a few varieties of peppers and which I put in at the same time with the tomatoes; I`m hoping that by the time the peppers get going the tomatoes will be about 1-2 feet taller and stop the peppers from being damaged by the sun.
The row closer to the centre has climbing plants : cucamelons -which are pretty cool, peas and it will also have some lemon cucumbers which are still at seedling stage and need a few more days before being transplanted in the system.
There is also a tromboncino squash which might be a mistake as these things seem to grow huge.

Picture from a month ago, 29th of April - the day I transplanted the first plants in. 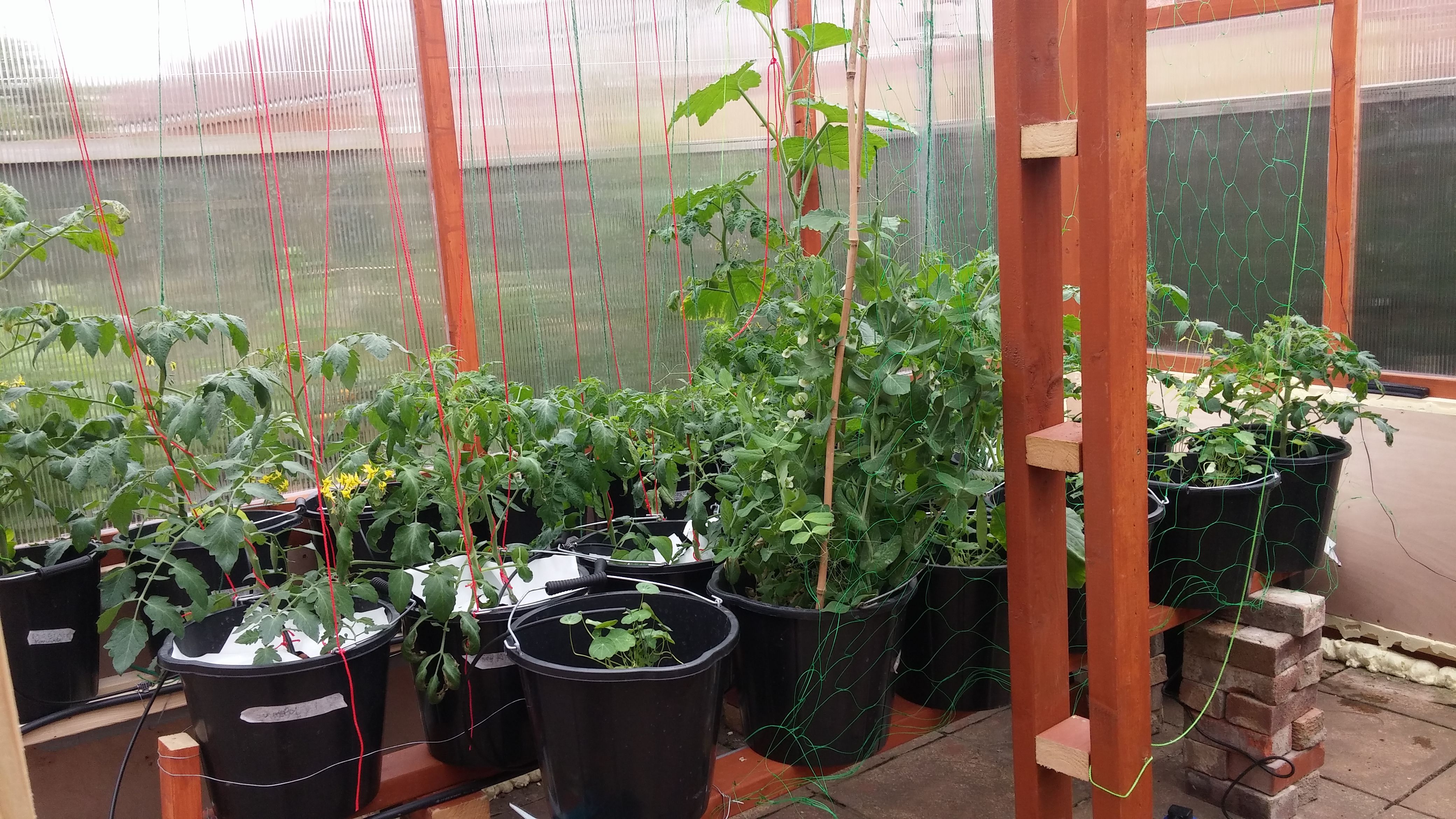 A view of the piping. 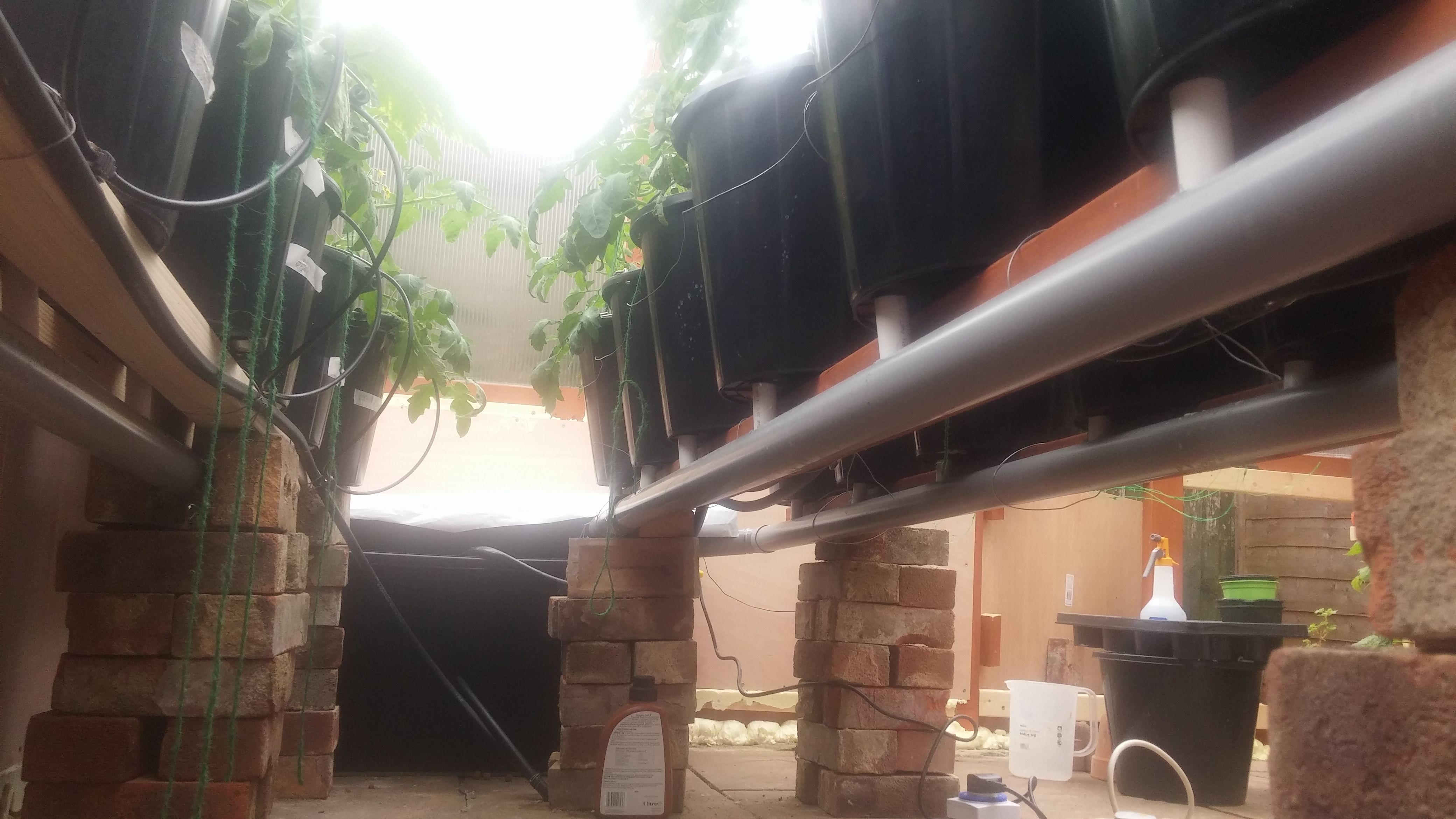 The reservoir. Everything is powered by a submersible pump, set on a mechanical timer. 15 on, 15 off during the day (except when it's too hot and I just let it run); 15 on, 45 off during the night. A picture of some really happy roots. Only a couple of the buckets have the "O" watering design, for the others I just stuck the dripline next to their roots. 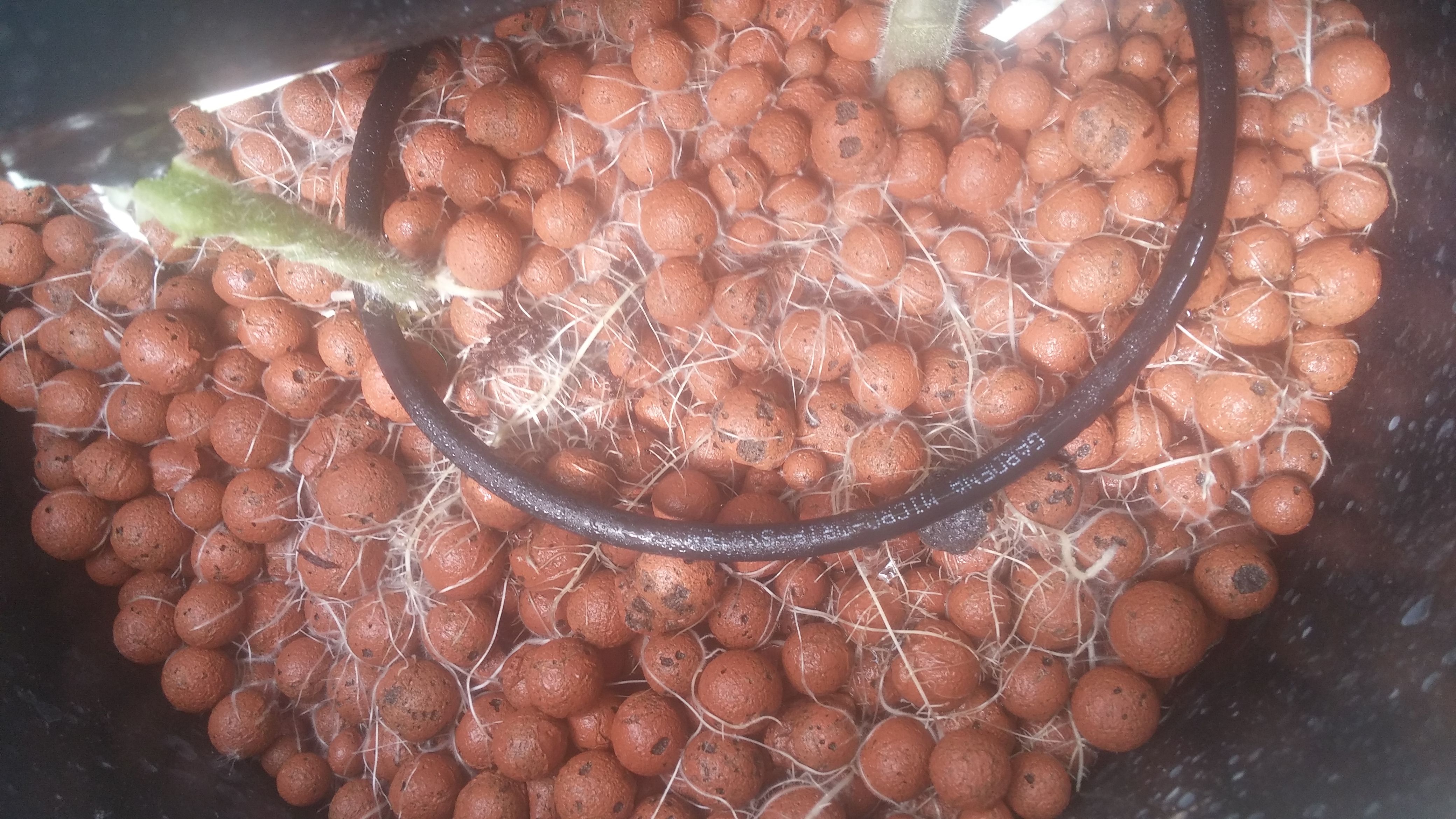 On the right side of the GH I built some shelves, the goal is to have a microgreens production area there. At the moment I've got a few trays of micros, some fancy pineapple mint, lemon balm and random stuff populating the shelves.

That's about it for now.

Thanks for checking it out!
Cos

Spectacular work, it even looks beautiful. Thank you for sharing your knowledge, it isn't exactly an easy to do thing that is for sure, but your design is awesome.

Thank you, glad you're liking it. It's not a particularly difficult either, once you get going. When I was researching the hows I've watched so many videos and read articles, took notes and made plans and then by the time I started building this stuff the plans didn't really match up with reality anymore and of course I made lots of mistakes. The advantage with building it from scratch is that most of the things used(pvc piping, plastic buckets, etc) are really cheap so it wasn't a biggie when I messed it up.

The building would be the hardest aspect where I live, you need a building permit to change a roll of toilet paper, (he he, : ) )but it is worth it, once you know what works best.

Hah, sorry about those planning laws, that sucks. In my part of the UK there's a few rules you have to follow when it comes to outbuildings and as long as you don't bend them too far and the neighbours don't complain you're fine :)

Here if you don't line their pockets, and even if your neighbors love your building, they would give you fine and or have you tear it down. You have to be so careful, we buy pay taxes yet we don't own anything.

Very nice. Do you grow all year around?

Thanks. This is my first season having a greenhouse, I've only finished building it in April. I'm definitely going to try growing some cold resistant plants during the winter as well; we'll see how that goes.

I don't know how far north you are but here in PA not much sun energy from Dec-Feb. I don't have a greenhouse but I just notice in my garden things really slow down in Dec even if it's still warm out

Nothing really grows outside in the winter here, it doesn't get too cold, about -5 C . I'm sure that if I can keep my greenhouse above 2 C I could grow spinach and other leafy greens, they don't need that much sun. And I guess I could move my strawberries inside to give them a head start for an earlier production and maybe that would give me a second cropping.