My Vacation visiting Steemians and being on the "Hots or Shots" show!

What do you call a group of Steemians? 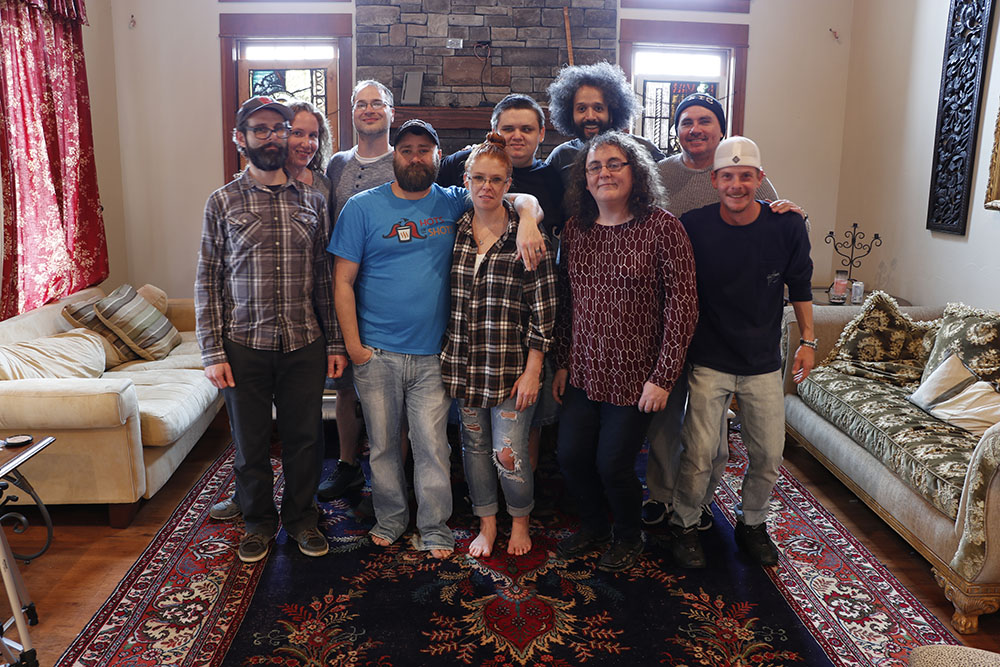 A Pod? A School? A Gaggle? A Circle-Jerk?
I'll let you decide that one.

As some of you might have noticed, I've not posted in the last week. Luckily this time wasn't due to burn out or anything. This time it was a full blown vacation! Doing what you might ask? Well...the group picture shown above gives a little bit away.
Some of the highlights of the trip included being on an episode of @Jonny-Clearwater's "Hots or Shots" show, getting to meet and hangout some fellow Steemians for the first time and seeing some other long time friends (who of course are also here on Steemit.)

Oh...and we recorded a reunion podcast.
But shhhhh....that's our little secret until it gets posted! 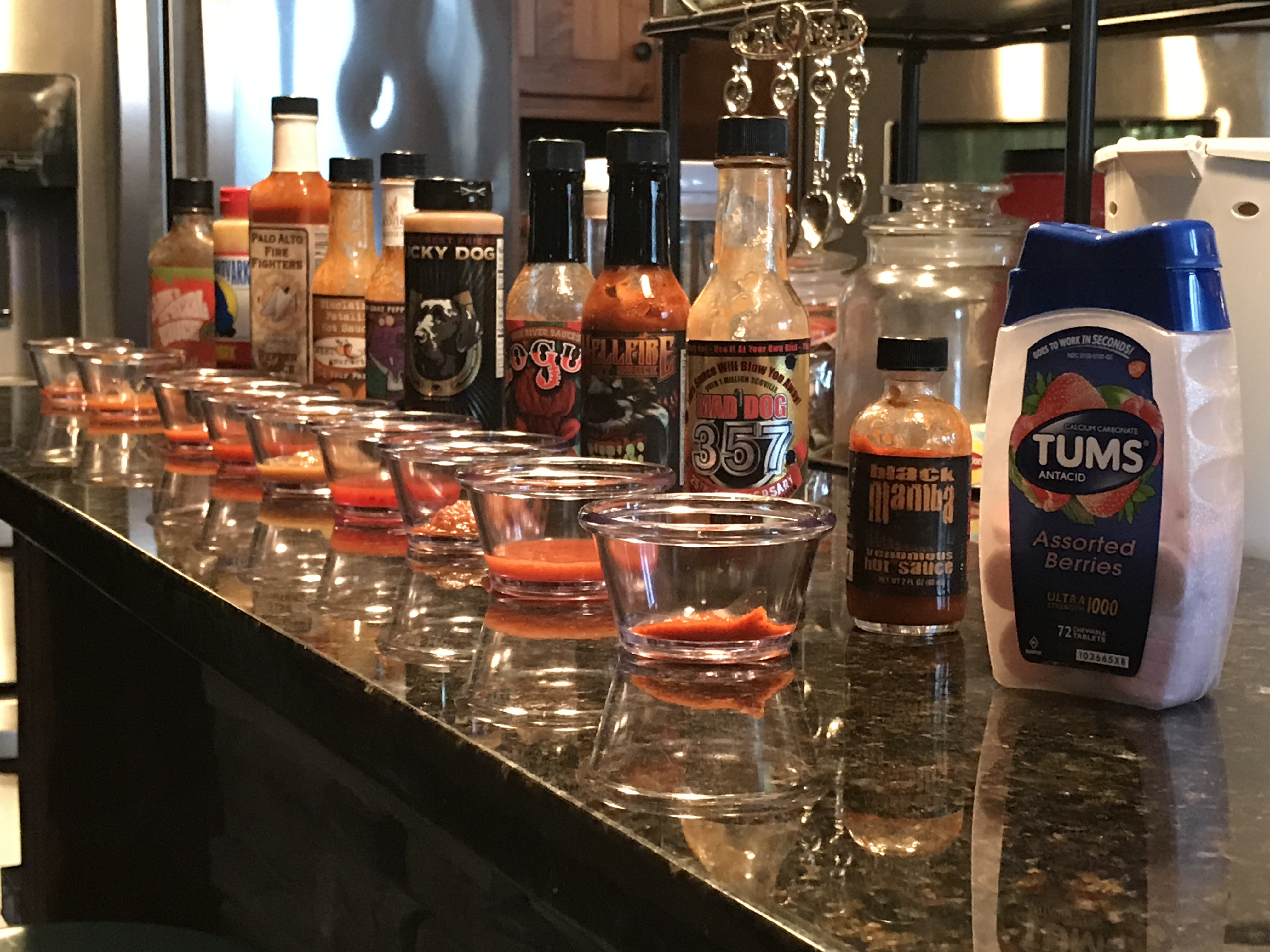 While I do travel down to Springfield, Missouri often, this trip was kind of centered around being a guest on @Jonny-Clearwater's show called "Hots or Shots." The gist is that the guest is asked series of interesting questions while either eating 10 progressively hotter 'hot sauces' or taking 10 shots of Bourbon. Needless to say that I agreed knowing that this was a lose/lose scenario for me since I'm not really into spicy (notice the bottle of Tums in the picture?) things nor a big drinker. The only thing I could really promise was that "I'd try" and likely make some funny faces. While it was really tough being the one to follow @JacobTs's epic episode recording...I still had a blast and can proudly say I didn't throw up in an inappropriate places! Yay! 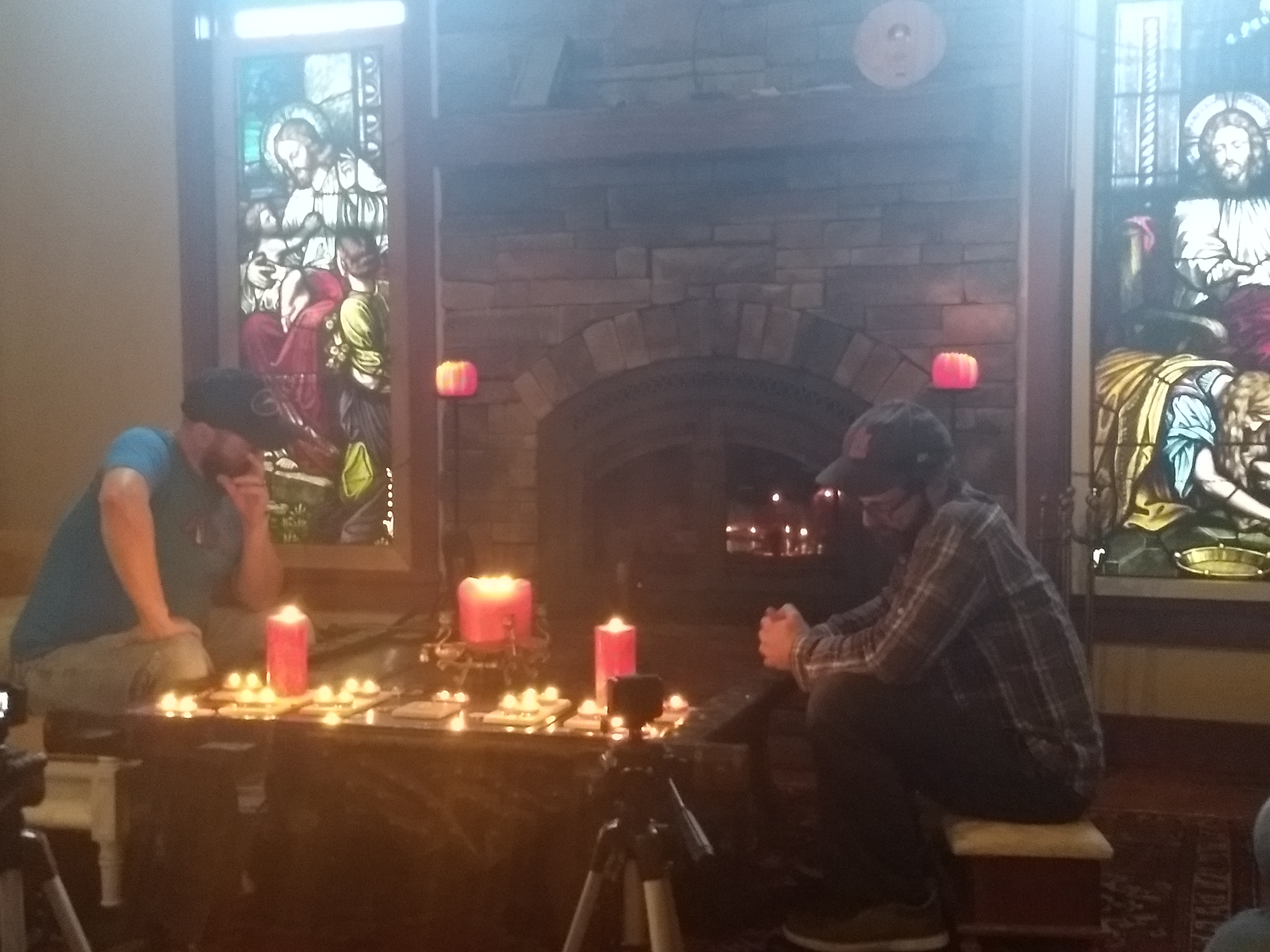 I don't want to give too much away about the episode
...you're just going to have to watch it when it comes out in about 2 months. For those that have a hard time waiting that long, I can at least offer you the latest Hots or Shots episode with @RichardCrill HERE.

Meeting the Circle-Jerk of Steemians at the Mansion
(Yep...I went there. Lol!)

The house everyone stayed in was absolutely amazing 5 bedroom masterpiece! This things was HUGE with some fantastic stonework, artwork and other decorations. For once I was too distracted with things to do and people to meet that I actually didn't think to take too many pictures. At least I got one of the awesome tree house they had in the back yard! Normally you this would seem rather strange (breaking out of the 'this is a post' mentality)...but in this case that would have taken time away from chatting with everybody! Pretty much the only times I ended up getting a good picture was when there wasn't anyone else around. 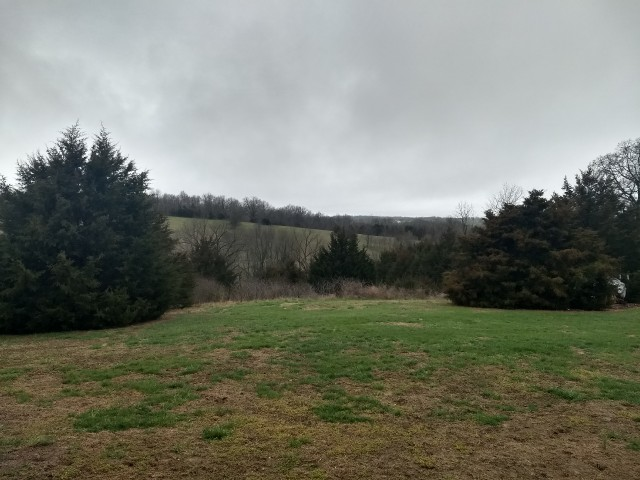 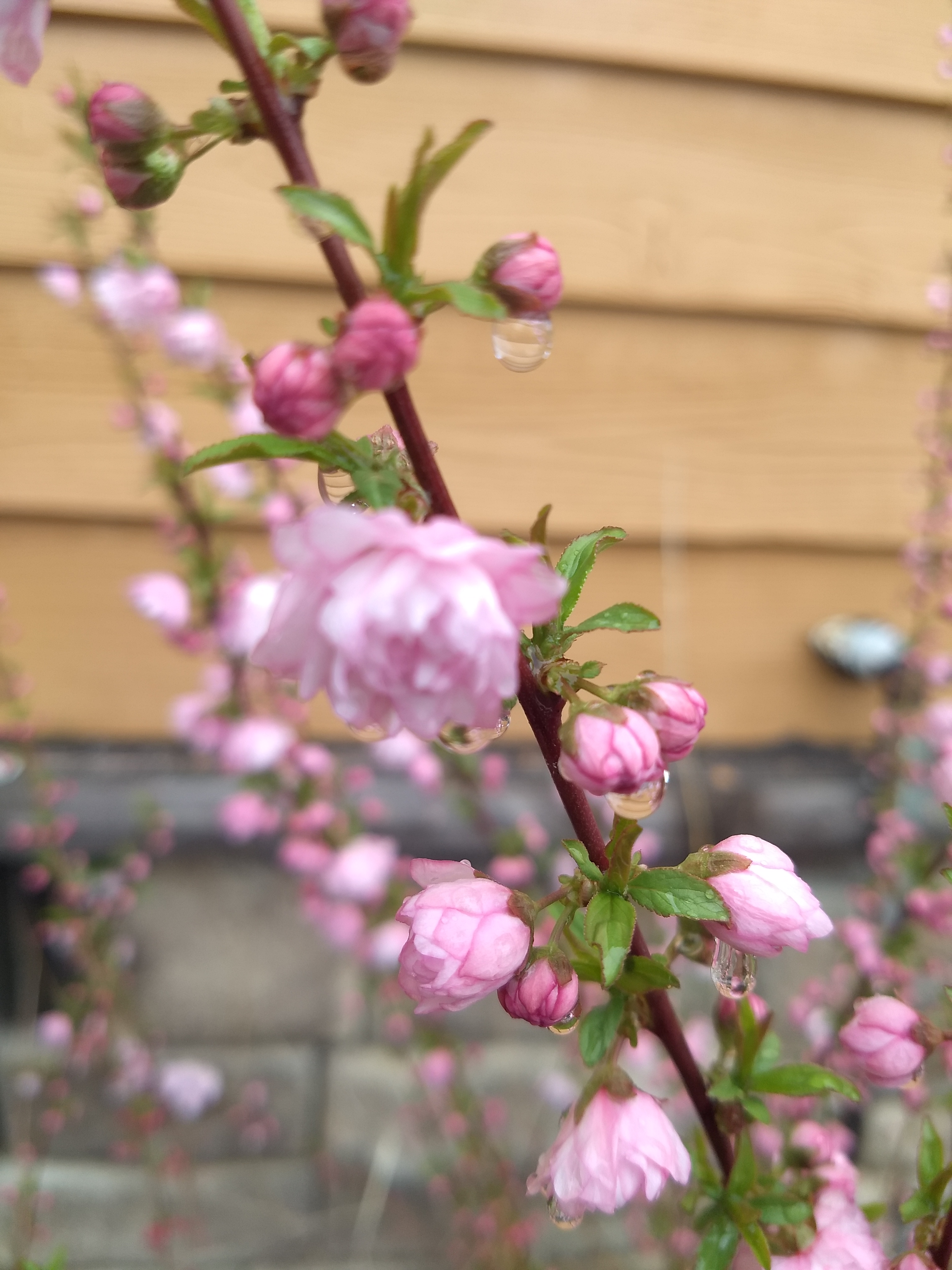 @JacobTs and I were first greeted by the poor @Jonny-Clearwater (recuperating from a 'shots' episode the night before) , his wife @FlowerPowerArt, and their son (such a cute kid!) Not long after we got to see everyone else as they woke up including @Liberty-Minded (the video production expert), @GiftedGaia (another "Hots or Shots" guest), his girlfriend @SweetSarcasm, the famous @Instructor2121 and his son @TygerGamer! We even got to hang out with the guy that first brought me to Steemit for a while...@WinstonWolfe!

Not to take anything away from the others...@Instructor2121 has been one person I've been really excited to get to meet. I've known his on the platform from my really early days, seen all the sizable projects he's managed to implement and was not disappointed with the chance to talk SMT's, Bitshares and anything else that came to mind.

The next day I even got to hang out with @Papa-Pepper again (we first met at the Kansas City meetup last year). Being as spontaneously awesome as he always is, after the mere mention of me wanting to buy one of those Silver Steem Coins he had the gift handed across the table in the blink of an eye. 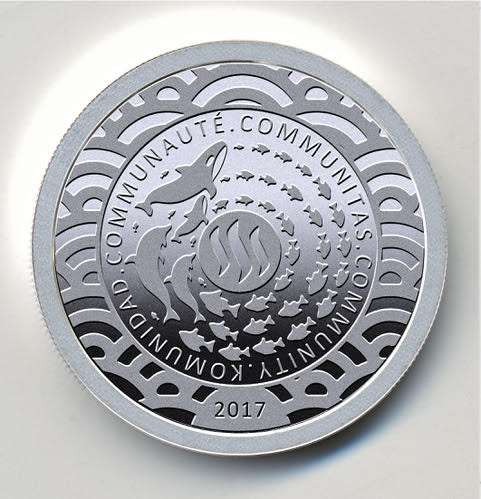 A quick fun fact about me: I always have sort of rock or crystal with me to 'fiddle with.' It's been a looong time habit. But since I was given this coin...it's completely become my full time 'fiddler'. On top of this...@Papa-Pepper even brought some of his Steemit trading cards with him...how cool is that?!?!?! 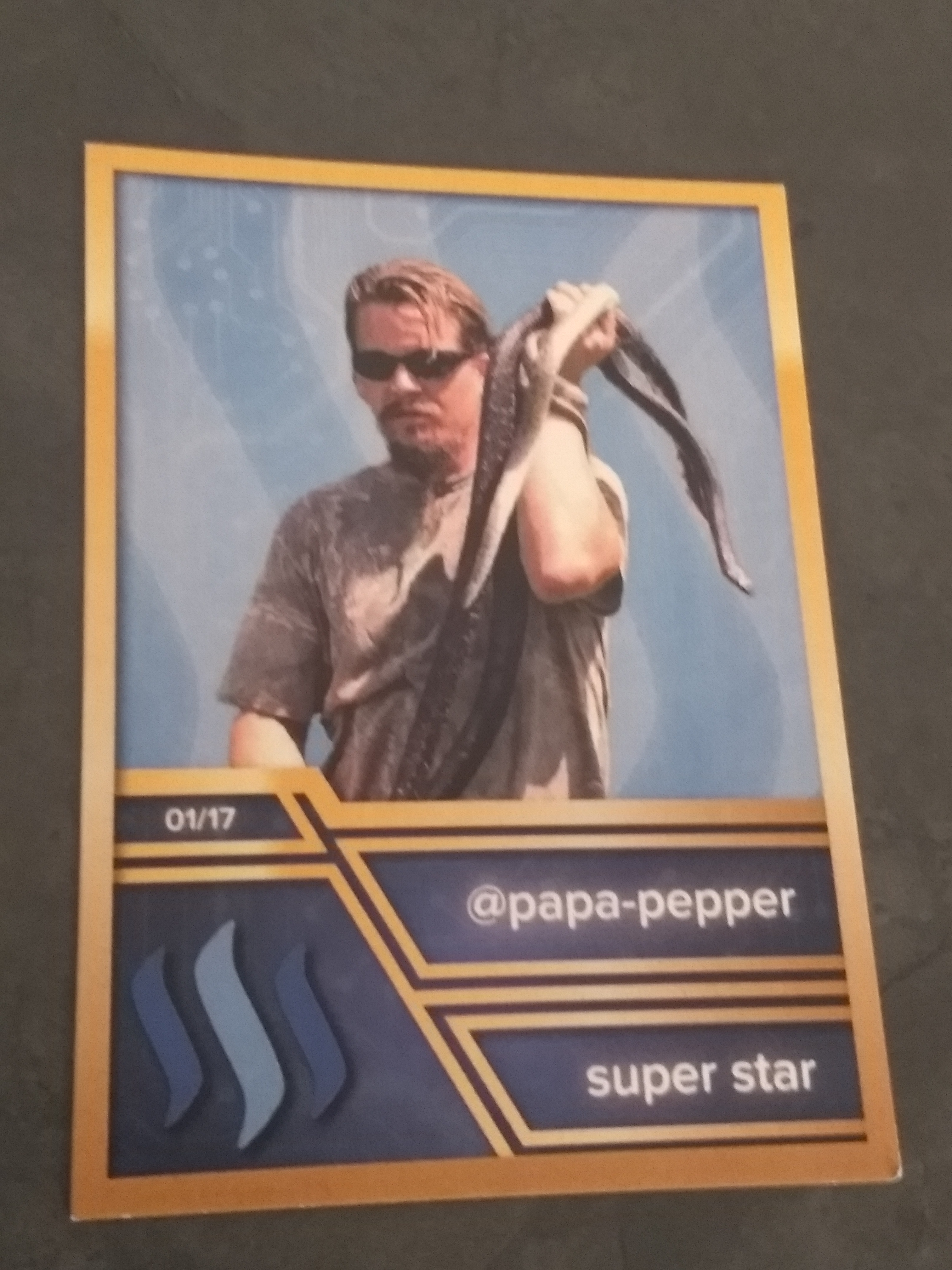 If any of you ever get the chance to meet your fellow Steemians in person...I HIGHLY recommend it. Just like that first time you get to hear somebodies voice after only knowing them through text for so long, meeting face to face takes it to a whole new level! Getting to hear first hand peoples projects, passions, plans and all around knowledge is an added bonus!

Some of you might remember the Steemit Talk Podcast that ran from July 2016 to July 2017 which started with @WinstonWolfe, @GiftedGaia and myself as the original hosts. This was in the day back before MSP and the huge number of radio shows (which I'm thrilled to see!) The show eventually ended with all of us having 'real life' start to happen, which kept us from being able to devote the time we felt was needed to 'do it right.' Since then we've all found our own niche's...but all of us sure missed being on the microphone. With such a great group of people in town...how could be pass up such a great opportunity?!?! Thankfully everybody will both more than willing and able to sit down and record a nice Steemit Talk Podcast reunion show! While we used to do our shows live on Discord...this time, with as many people being there...we felt it was best to record this one and surprise you all! (Still our secret! Shhhh! Lol!)

You should see this throwback STP posted pretty soon and I don't want to give anything away. (Sorry, you'll going to have to tune in to the show.) But I wanted to give a HUGE thank you to everybody that joined us for this very special episode:

After a trip like this...I don't know how I'll contain myself until the next meetup! Maybe this means it's time to finally organize one here in St. Louis and see who we can bring out from the wood work!

Of course need the obligatory kitty pic!
This little guy was sure happy when I got home! Our cat was so angry at us.
It was great having us all together lady.
I'm glad you found the time to be a part of our lil carnival.

@sykochica and I shared cat pictures when she was there

Hehe... it's not truly a vacation until the cat pics have been shared! :P
Thanks again for being a great host, podcast guest host and all around person! Such a memorable week!

Looks like you had a great time, I can imagine the vibe, if ever you think of visiting South Africa (Southermost Tip of Africa) give me a holler...

I believe "A Gaggle" would be most apropriate name for the get together.

Oh..it was such a great time! It makes me wonder what actually making it to a SteemFest would be like.

It'll likely take me a while to get over there, but I'll definitely holler when I do. :) Do keep an eye out for Jonny-Clearwater too...he'll likely be traveling before I do. Lol

Hahah...Gaggle did have a good ring to it. I just couldn't pass on the circle-jerk this time around, lol.

Will do so, if someone can put a smile on your face why not.

SteemFest I like the Idea, would definately be something different... @johnny-clearwater will have a look.

Wow such big names, it is such a great time you have had, yea i was wondering definitely where you were~ ,though looks like tu you have had sa great time

But you didn't mention entertaining us (or the cute kid) with your awesome propane tank.

It was a pleasure to be there for the podcast, it's crazy having so many great Smeemians in one room talking about Steemit. Mind blown

I really worried about you, because I lost you so much
I wish you a happy Easter
I wish you had a happy vacation issue

it was definitely a fun time with even the small group we had hanging out together, I gotta get one of those drums you had!

Ok I am really jealous like of everything you did, it looked like an amazing time you had, not to mention omg that house looks awesome. But I just want to say I missed you lots and I am glad you are back <3 You seem to be enjoying yourself. A vacation is needed every now and then. I, myself have been away from the steemit community for about a little over a week on my own sort of vacation. I am back now though, and i did miss reading your posts.

looks amazing and rather Gothic with the lighting, am glad everyone had a blast and no unwanted projectile vomiting occured ;)
Perhaps the collective drinking magic powers started to raise steem prices ....(insert Twilight Zone theme song)
axey

I prepared a special bucket for @sykochica, but she thankfully did not have to use it. :)

Welcome Back Sykochica.
I did watch a part of @richardcrill's Hotshots interview.
From the bits I saw, it seemed like a fun show.
Looking forward to watching yours :)

That sounds like a lot of fun! Good to know there are so many awesome Steemians so close to us. We live about 1.5 hours from Springfield and look forward to meeting many of you when the time arises 😊 glad you had such a good time!!!

We all missed you

you are great and good and cute

That is indeed a cool get together I suppose ;)

Seems like you did made some good memories along with the others !

Some pretty nice images you got there as well and obviously the pretty cat ;)

I am very happy that you are well, I hope you enjoyed your vacation ,,, It is wonderful to meet with new great friends like @jacobts , good luck my dear friend @sykochica 👍👍😉
All the best for you👍😊😃 The steemit gang HODL :D hahah that is epic :D

Welcome Back @Sykochica.
great post .
i hopt to be fine
greetings to u
good back

It looks like you had a great time -- and created a lot of content, too. While you were on vacation, lol. And what a nice place to have a group together, too. It's a good thing you all did the Hot or Shots in sequence. If it was all at once, who knows what would have happened! Yikes! :D

And congratulations on your new Steemit Silver Round! They are so cool, especially that design on the back. I got one from @papa-pepper, too. It was such a surprise!

Love your kitty, sykochica! :) (Did that sound dirty?).

What a hilarious concept for the hots or shots show! I'm not into either either, and don't know which one I would go for. I KNOW I couldn't make it past 3 shots for sure! 10 shots, have mercy!! Can't wait to see the show!

Great to see people coming together. That is what this community should be about. My favorite kind of posts. Keep up with...