Yes, more animals.... it's kind of what we do around here.

If you've seen the latest @little-peppers post, then you know that we recently got a couple little Nubian bucklings. While they certainly are a cute pair of goats, that is another story for another day. Today, I want to tell you about "the big one," Wild!

This is Wild, our new doe. This goat started out as part of a trade last year. When we picked up Daisy and Crockett, the people still owed us one goat, but did not have one ready. Recently, though, we got the green light and the time came to get that goat that was owed to us. Wild is a doe, aka female, and she is a mixed breed. She is part Boer and part Savanna. Both of these varieties are traditionally referred to as meat goats, because of their solid build. The Boer goats are one of the most popular meat goat breeds here in the US, and Savannas were originally developed in the 1950s in South Africa. They are a hardier breed than Boers, and we glad to have her as she is. If you notice her horns, you'll see that one is crooked and looks almost "withered." I think that someone attempted to disbud her, but failed at the attempt. Disbudding is when the young horns on baby goat kids are removed, or at least an attempt is made at removing them. A few variations of the process exist, and some side effects are possible. Her other horn looks messed up at the tip too, so that's my best guess. Personally I think that if an animal grows horns it should be allowed to, but many people favor hornless goats for a variety of reasons. Horns are indeed a potential hazard and animals with horns have the capability to harm themselves, other animals, or people, whether intentionally or accidentally. Many people enjoying "showing" animals in clubs like 4H, and I think that for dairy goats, horns are an immediate disqualification. Disbudding is one of those things like docking tails, which is common with some sheep and dog varieties. One interesting thing about this lady is that she is a big jumper. She took off earlier today and landed in the sheep pen. I think that she was lonely. Either way, we will have to keep an eye on her, and after we are done monitoring her to make sure that she is healthy, she will end up being penned with our dairy goat Daisy, and they can be friends. I may end up looking for a Myotonic goat to breed her with. Myotonic goats are also known as "fainting" goats. Besides their "fainting" capabilities, the do not jump like other goats, which may help to keep Wild's offspring grounded. So far Wild is doing well. She's got a luxurious coat and isn't that shy. We are new to her and she is new to us, but we are working on building a relationship with her. We are happy to have her as part of our flock and I think she'll enjoy eliminating some of the undesirable plants on our homestead. Also, we hope that she will be a good mother and able to help us increase our herd as we move forward. Thanks for checking her out! FOR MORE PAPA-PEPPER CONTENT, CHECK ME OUT ON SOLA

Submit
$66.29
373 votes
72
Authors get paid when people like you upvote their post.If you enjoyed what you read here, create your account today and start earning FREE STEEM!
Sort Order:
[-]
pouchon (69)  ·  2 years ago

From your in depth description we are happy to see that you consider many angles and aspects to your decisions. Keeping animals is not to be taken too lightly. When we own them we are their benefactors as well as their protectors and providers! You understand this well!!

I hope her jumping isn't too persistant... Or you'll have your hands full!!

All content is MANUALLY curated. You can support this work through Steem donations, upvotes, and SP delegations.

Cool, thanks @healthy-home! We will see how the jumping goes, but we believe that once she is "with her own people" it'll decrease. We will keep you posted!

Yay moar goats! I know the feeling lol. Her horns are unique! Though having a front facing one does seem precarious I think she is cool. I had never heard of the savannah breed before so that's new to me. Seems like an odd combo though to breed her with a fainting pygmy lol.

Not a fainting Pygmy, just a fainting one. Like other breeds they come in different sizes. You can get full sized fainters, they just don't jump.

Yeah, it's a benefit of the lifestyle!

Good man..you can give something every day for living...

I love the color of that goat, :) your post inspiring me a lot to post here in steemit and do more! Hope to become like you someday. Success !

It is a beautiful color. We love her look! yes friends .. i am very happy if you can talk my blog ya ya friend

Nice to meet you wild

If the soul is the ability to love, be faithful and grateful, then animals have it more than many people

Exiting new addition. I've never seen horns like that... Hope she gets along well with the others. our friends who keep alpine X Lamanche have issues with horns getting stuck when The goats poke Through cattle panel. They just tape blocks of wood to prevent and Leave the horns to fully express themselves. Works great for them.

Curious what comes of the breeding with Myotonic goats. thanks for increasing my barnyard education;)

I heard her in trailer but nice to see her. Maybe later when our buck is ready they can have a date lol.

Hey Hey! Good idea! Let him grow up.... but at four months he should be capable of getting the job done.

Are we making a date for the goats lol. Might be a idea goat dating site lol.

Beautiful Goat 😊 And My Goat 😍

Your goats are adorable! We used to have goats but not anymore. I’m just looking around here on my first day of Steemit and this pic caught my eye 😍

Glad to see that .. upvoted for you. if have some seconds please review my post

True story... I had the job of milking my aunt's goat while she was gone on a trip. That goat was a milk producing machine! One of my young cousins walked up to watch me..... and I sprayed him right in the face with her milk. He screamed and ran away haha.

Oh, and here's a photo of the types of things I do for fun. It is alive, and after I let it go I saw it try to sting the side of the house! ! Pretty little European hornet :) Cool, it looks like we would get along great. This scorpion below, it's a live too! (though I'm not sure why I did it...) Also, I like to fly bumblebees sometimes, and then safely release them.

I've never seen someone catch a bumblebee like that before. I used to fly june bugs on strings like that. The good old days. Nowadays I just fly my Phantom 4 lol. And I'd probably do that with a scorpion. I just haven't had one yet lol. I looked for them last time I was in Arkansas with no luck.

I know a good place near me. We took @vcelier and his grandson out looking for them when they were here : https://steemit.com/adventure/@papa-pepper/hunting-wild-scorpions-at-night-with-uv-flashlights-treating-our-guests-to-a-once-in-a-lifetime-experience

In less than 12 minutes they each found one! Something you can't do in Canada. That's exactly the kinds of things we were doing when my aunt and uncle lived in Arkansas. No scorpions though. We were up at all hours of the night out having fun! And then they off and moved to Alaska. I hear they're wanting to move back down this way though!

I love goat but I like to eat goat meat too. My grandfather in the province has few and I like them all, would love to visit there soon. 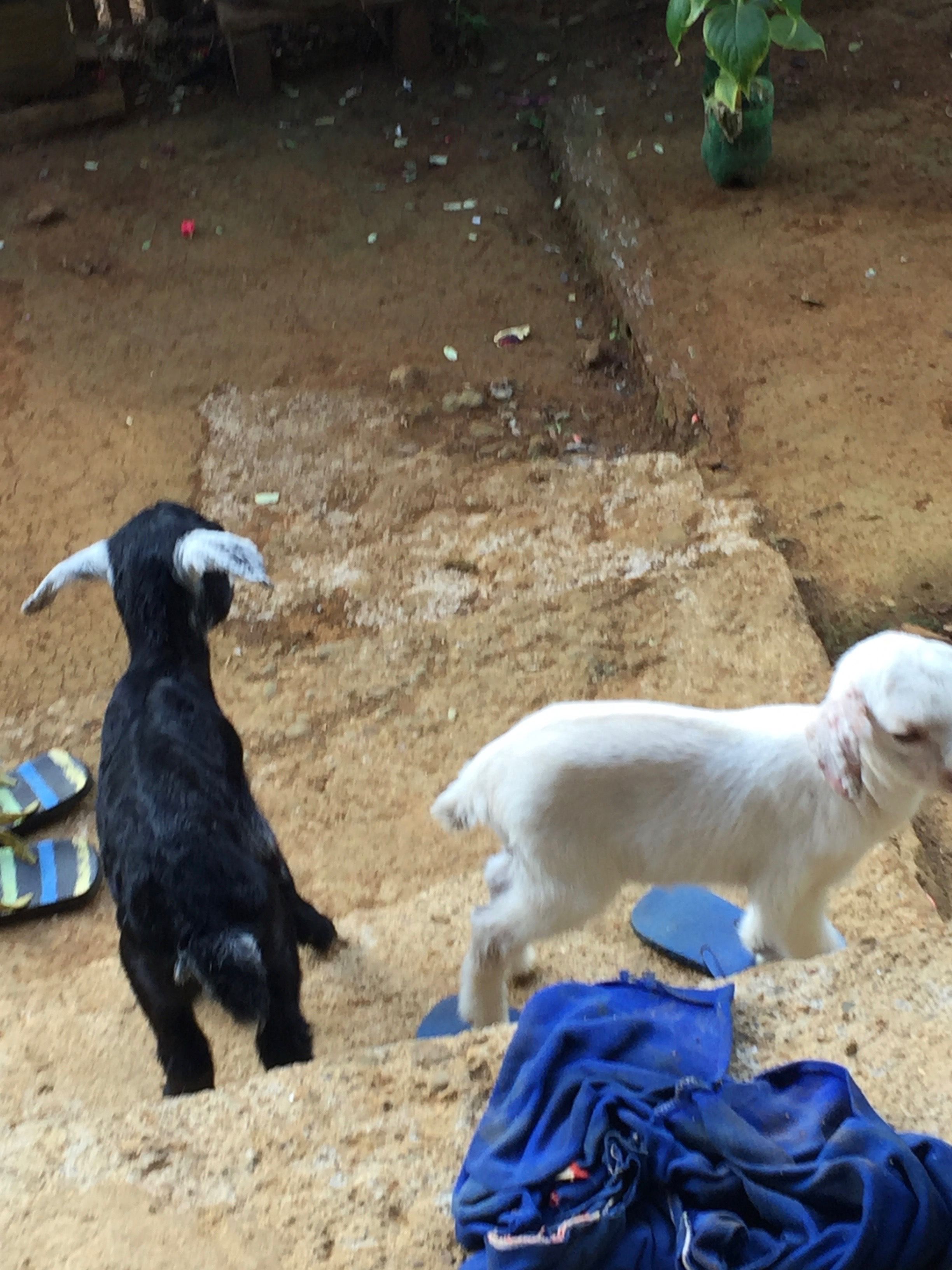 This goat is funny and very interesting.same as you i have too I heard goats are good animals for homesteading. You get meat and milk and I hear they are easier to care for than cows. I also heard the milk is supposed to be better for you but I'm not sure about that.

It's always good to learn more about goats. Good post. Thanks.

They are smaller than cows which can help in a lot of ways.

Aw! So cute! I love goats! We had a farm which had goats! I was one of the milkers! So much funness!

Thanks for checking it out and for encouraging me!

Very nice to meet you, Wild! Stunning photos my Friend! I hope all is well! All the best! Your Friend @extraterrestrial :)

Thank you! She's a beaut!

Nice to meet you wild

Cute little goat with the white jacket. Incredible that she can jump so high.

U do gardening, plant a fruit trees, u do farm thing, u raising animals, Really cool @papa-pepper. Its very fun to do if we had a big field around our house.

Nice post for sharing the dog coat. I have not seen such an animal before and not in picture form.
it looks really like a dog by the side view. I have followed you hope to see more of your post cheers

wonderful
back in the day (in the eighties)
I had a small herd of Nubians.
I kinda miss them..

Hopefully my posts will get you your fix then. Thanks man.

And so the herd increases, better start taking options on the next door section, at this rate it won't be long before you need it for the animals and plants.

We are thinking about our options.

I must say you are making me have special interest in goats sir.

Cool, we are still pretty new to them, but we like them!

With time, they will warm up to you as you would to them also.


Proof of wild made me laugh. I have never heard that before.

Glad that you got a laugh out of it!

Goats from pets, which are in different forms around the world. Goat meat is considered to be the best meat. This is because of the lack of cholesterol. Goat milk is considered the best milk, and it is similar to its composition with breast milk @papa-pepper

I love Wild's horns. They are unique and make her special. I wish that people won't doc tails and disbud horns. Leave the animals as they were born to be. She is probably lonely. Most animals were not meant to live solitary lives...

Such a cute lil doe! Can't wait to see future posts on your trio of kids!!

Glad to hear it!