Quail When You Can't Have Chickens?

minismallholding (69)in #homesteading • 4 years ago (edited)

Many people are prevented from keeping chickens in urban and suburban areas due to regulation. We were in a similar position ourselves when we lived in a rental. They didn't allow animals, so they would never have allowed chickens tearing up the garden. However, we did get them to agree to us having some quail kept in a purpose built cage which we could move around the lawn. 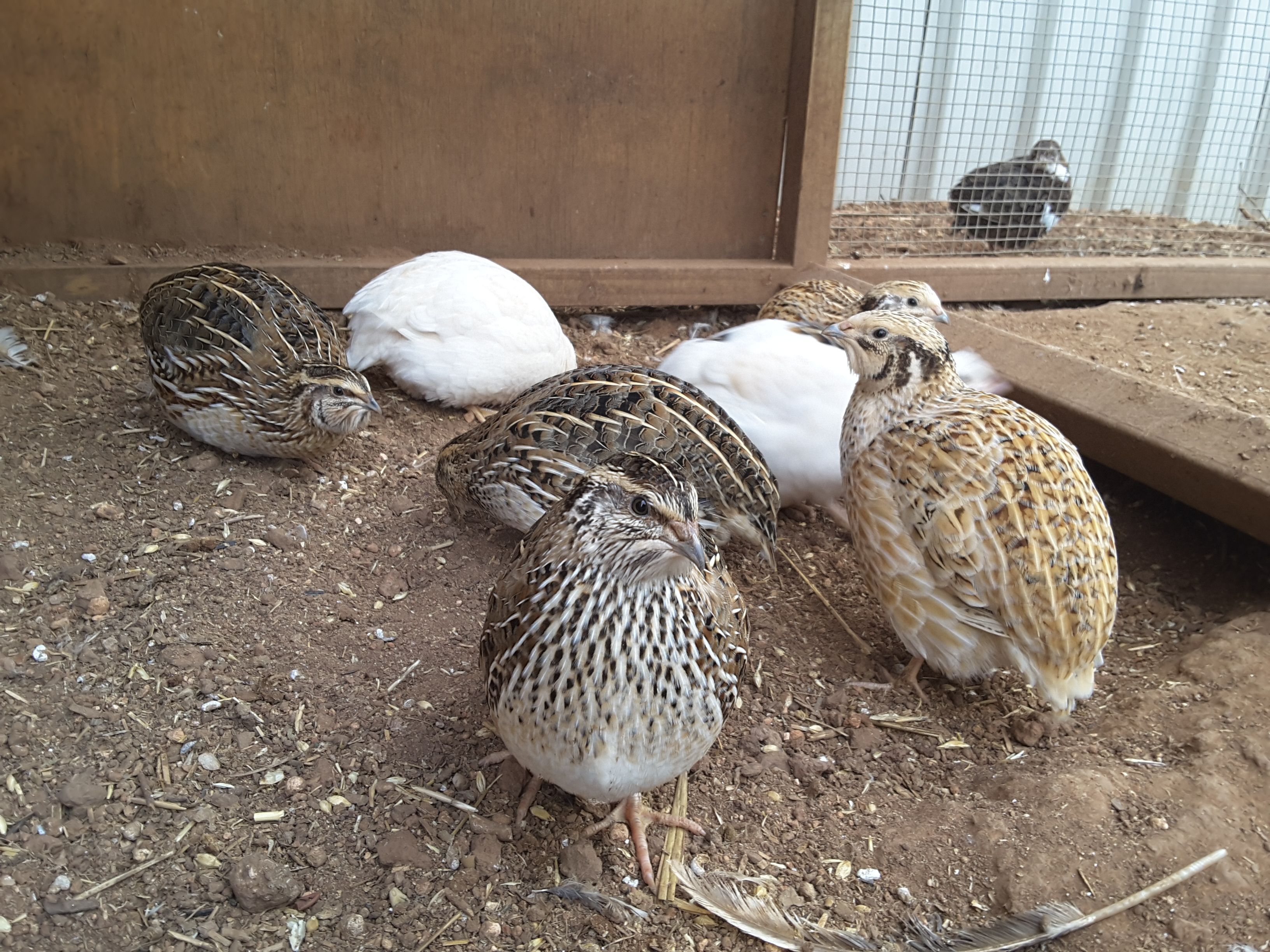 For anyone who yearns for chickens, but isn't allowed to keep them, I would urge them to consider quail as an alternative. You can almost think of them as a miniature version of chickens and I doubt there will be any ordinances against keeping them.

The most common quail kept for production purposes are Japanese, or corturnix. The first quail we kept were Bobwhites. They are very sweet looking birds, unfortunately they aren't big layers and their eggs are smaller than the corturnix eggs. So initially we were eager to get chickens when we got our own place. However, when we built a huge cage around our fruit trees and bushes I realised we could do with some insect eaters to control the bug population. Chickens cause too much damage, even bantams, so we decided to try quail again, this time the Japanese ones. These guys lay practically every day when in season and for their size and food consumption they are more productive than chickens. Some people find them so productive, they have more eggs than they can deal with! Apparently 13 laying quail will provide the equivalent of a dozen chicken eggs per week. They eat the same as the chickens, you may just have to cut kitchen scraps up smaller for them. They do eat the leaves and fruit on the lower branches, but they don't climb in them like the chickens would, so they are much less destructive. Each bird only needs an area roughly the size of a sheet of A4 paper to live in.

Some cons are that corturnix aren't long lived, about 3 years is the average. They also won't lay from late Autumn to spring if kept in natural light; although personally I don't see that as so much of a con if it gives them a rest, keeps them healthier and maybe even gives them a longer life.

Interesting! Yesterday I learned that you can feed whole quail eggs to dogs. A coworker (of my husband's) aunt does this for her great danes. Occasionally when she has too many quail she lets the dogs go out and hunt some to eat. Now I have to seriously reconsider quail as a homestead bird haha

I think dogs will eat any eggs. 😄 I met a Maremma flock guardian who was on a diet because he kept eating the muscovy eggs from the flock he was guarding! Lol! They'd made an enclosed area for the ducks to lay out of his reach, but he still kept finding some.

haha that's funny! A raw diet will be new for ours so maybe the little softer ones will go over better? We do actually have muscovies but they won't be laying for a few months!

I'd love to hear how you go with changing over to a raw diet for them. I hippie you'll write an article on it. Let me know if you do so I don't miss it.

I definitely will!! Right now our dogs do get raw bones to chew on once a week for 3 days. You can read about it in this post: https://steemit.com/dog/@minighomestead/using-the-whole-buffalo-dog-bones. They will also get the occasional cooked chicken (bits I cut off before cooking) and egg yokes (I hate egg yokes).

That's very interesting. Do they make noise?
Also, would you consider eating them?

We do eat them. You only need 1 male to 4 females, so you don't want to leave too many in there. If there's interest ill do another write up with more details on how we breed and use them.

:) I thought so but didn't want to assume . My next question was if you have a trick to get all the feathers off, as I imagine it would be quite the task dressing a quail?

There are different ways to dress quail. Because they are so small I think most people choose to just skin them removing the wings as they go. I personally choose to pluck them (just dry as the feathers come out fairly easily) because I like to try and make the best use of them. It is more long winded, but you get quicker with practice. The last little hair like feathers I singe off over a flame; they then just wash off.

Thanks for answering my question!
I think there is enough interest that you could do another post on quail and how to keep, care for and use them and their eggs.
I once saw an article on how a lady in a disadvantaged community started her own business with just a couple of Quail and ended up supplying supermarkets with quail eggs and meat. I'm considering looking into doing something like that. Maybe just starting with eggs at the farmer's market. I'm just concerned they would get blown away in the Cape Town wind :)

😂 Funny you should say that about the wind! We had quite a storm here one night and I was so worried for them as they don't like to use their shelter. Some of them were getting rolled around like little balls! I was amazed that they were all accounted for the following morning. Amazingly tough in some ways.

I wish you luck if you do go forward with your plan. Hope you are as successful as that lady.

Oh shame! Haha :)
Thank you. May your fluffballs also prosper! :)
I had a look at the municipal rules for poultry and my yard is too small. So will have to save that deam for a bigger house one day... Unless I can loophole it as a pet... Parrots live inside after all....Hmm.
Oh dear! :)

You could certainly keep some inside as pets. Then maybe let them outside in a little run in the day occasionally. We also have quail in the house as pets. One's called Cuddles; can you guess why?

My wife and I have been getting ready to get some quail. I think it would be great. We, however, do have the ability to have chickens. I want to raise quail for meat, eggs, and raise many of them to release around our area for hunting. Nice quail and eggs. Keep it up!

Will you be raising Japanese quail do you think? I wonder what breeds are good for hunting. Our Bobwhites were better flyers than the Japanese and I've read that some prefer them for their white meat.

We have California quail wild on our property, along with pheasant, turkey, grouse, and occasionally we see chukar. We had a bad fire here two years ago, and the numbers on all but the turkeys have gone down significantly. Hoping to see the numbers grow across the board. I have considered buying a 100 or so of the pheasant and the quail, just to release them when they are old enough. The California quail are beautiful little birds, and quite tasty, so whether I am hunting or watching, they are a joy.

Also, I resteemed this post. I think there are many people in your situation that may like to read this.

Okay, thank you. I hope it is useful for some. I'd like to write up a more detailed one on what we've learnt in breeding and keeping them.

That's a shame about the fire. I wonder how the turkey came through so well. sounds like quite the place for game, especially if you can get their numbers back up. I love the look of the California quail. Probably the fanciest looking of them all. I wish I had the space to have a few more varieties here.

I'm not 100% sure on why the turkeys seemed to come out of it better. The fire was huge...I don't remember the size exactly but somewhere around 150,000-200,000 acres. The south west edge of the fire was my house. It burned here for over 2 weeks, and by the time the fire fighters where given the equipment to stop it on our end of the fire, it was already a few hundred yards behind our home. They brought in a dozer and cut a fire line from the top of the valley wall to the river, just west of my home. Almost everything east of the line burned, except my house and out buildings and my neighbors place. All that to say, I think the turkeys had moved out of the area long before the fire, whereas the smaller game birds where seen around here leading up to the day before the fire.

This sounds like a great idea. Do you think I could keep a couple in one of those triangular coops with a run?

I think that the great thing about them, you can keep them almost anywhere. I sold some earlier this year to a woman who was going to keep them in a similar sort of set up. I'd just make sure it's predator proof as even large mice can be an issue with them.

Interesting, thanks ! Does a quail scratch the ground like a chicken to find food?

Yes they will, but being so much smaller they don't create quite so big a crater as chickens would.

ok thanks for these helpful infos!

Very interesting great greetings from venezuela here I will leave a link for those who can help me thanks! https://steemit.com/bitcoin/@wayforhappiness/segwit-locked-in-but-questions-remain-about-bitcoin-s-level-of-decentralization

Greetings to you too. Hope you get some useful feedback on your article.

They are sweet little things aren't they? My daughter has a couple as pets due to injuries or deformities.

Do you have any problems with aggression? We had a few and they were very nasty to each other. After a while, we couldn't bear it and parted with them.

We did with button quails! These ones not so much. There may be the odd aggressive one out in the run, judging by the occasional squeal, but there's enough room there for them to get away from each other. The main problem we had when we first hatched them was too many males harassing the females, so we had to thin them out. Now spring is in the air, I'm probably going to have to do that again to our last summer hatch. They're starting to crow again!