Field pennycress or Thlaspi arvense is a Brassicaceae (Mustard family). It is also known as stinkweed, fanweed, frenchweed, or mithridate mustard. Their native home is Eurasia but in the 1700’s they were imported to the USA and are now found in almost every state from Florida to Texas and north all the way to Alaska.

They reproduce via seed and in the wild will re-seed themselves for the next years growth. As a young plant, they tend to grow in a rosette pattern. As they mature, many of the lower leaves will wilt and die as a flower stem begins to reach for the sky. Unless you know what you are looking at you might think they were two different plants. 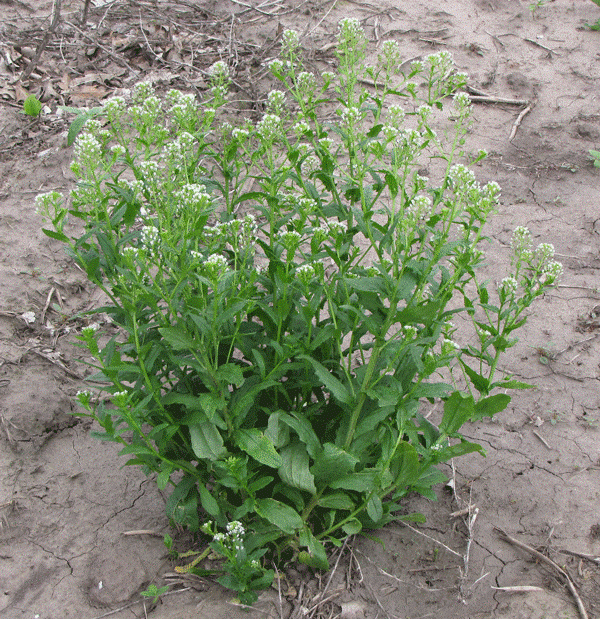 The flower stems can reach up to 2 feet tall and a single plant can produce up to 15,000 seeds. The abundance of seeds and the fact they are carried by the wind and remain viable in the ground for up to 10 years, are some of the reasons field pennycress is consider such and highly invasive species by farmers. It is not something you want to get anywhere near your other crops because it can take over and kill out other crops before they can produce. A variation of Field Pennycress getting ready to bloom
image source

The leaves of Field Pennycress can be eaten at any time, but they are MUCH better when very young. The older the plant is, the more bitter the leaves become and the stinkier they become. Some people do not like the taste of the young leaves and also consider them to be too bitter to eat. The taste has been described as similar to hot radishes. So, if you like hot radishes, you might love Field Pennycrest.

The seeds may be the best part of all (to some people). They can actually be ground and used to make mustard. They can also be sprouted and used in salads and stir fries like any other sprouted seed.

If you are looking for a good plant to add to your land for emergencies, this one might not be the best to choose. However, it is a good plant to learn to spot. If you are running from the zombies and happen to see one, you can grab it to eat rather than starve to death.

Keep away from your cattle

Field Pennycress does have some redeeming qualities. Seeds and Young leaves can be used for:

Last but not least, you can use the oil from the seeds in oil lamps.

Happy New Year! Have hardly been on steemit the last few weeks. Have mostly been negotiating a family Christmas and visiting friends during a visit to Ireland. Hmmm, I don't know this pennycrest!

I hope you have had a wonderful time. I have missed seeing you and was afraid something might have happened. I am glad to here you have had such a GOOD busy time, lol.

lol - yes, I remember you were wondering about me last time I went on radio silence so that I had better check in with mom ;) he he he

Yeah, I am bad about that. I worry about people I like. I have been known to drive half way across the country to check up on someone, lol.

I'm imagining the look on the person's face when they opened the door to you! he he

Interesting, I'm almost positive I've seen this in the garden. I will have to try it this upcoming summer.

It's very possible. You could very well find some.

It's good there are multiple names for plants bcz I see one that I recognize! Thank you. Growing up in the midwest, it was called 'stinkweed.' Not so lovely, but memorable!

I'm in the deep south and it's the same here. I didn't know what Field Pennycrest was until I started researching this post and found out I had seen it hundreds of times.