The Door to where?

I am not a mechanic, plumber, carpenter, or an astronaut. I am a guitar player.

Sometimes however there are things on the homestead that need to be addressed and last week was no different.

When we purchased our home, the entry door was installed backwards. What this meant was the hinges were outside and the seal that keeps weather out was on the inside. This created a few problems during the winter months not the least of which was the door being completely frozen shut.

It was time: I ordered a new door and frame.
Initially I was quite nervous about ripping out the existing door and frame fearing I would find some major problem and not have a solution.
Certain I wouldn't die if that were the case I began by removing the interior trim. Next I removed the exterior trim and removed the door.

At this point I could still turn back, put the door on and go hibernate.

I then took my reciprocating saw and cut through all the nails securing the door frame to the surrounding wall studs. Then I simply pushed it out.

Now there was no going back. I had to complete the job.

Because it was a standard sized door and was being replaced by the same I anticipated no problems.

Once I removed the old footer that was under the door frame, I installed a weather barrier around the perimeter of where the new frame would go.

Now it was time to pre-fit the door.......It was too tall. Even though the new door was the same size as the old one, the frame was not the same. Should I panic now? Nope.
It was time to cut out 1" of the header so this would fit. Success!

I finished installing the new frame and door and discovered another problem. The brick molding on the new frame was nowhere near the same size as the old doors. Time to improvise.

I ripped 1x6 pressure treated pieces to fill the newly exposed gaps on either side of the door. Screwed them in and caulked the joints.

Here is what the exterior looked like finished, and is now ready for paint: Here are close ups of the jury rigged gap fills: 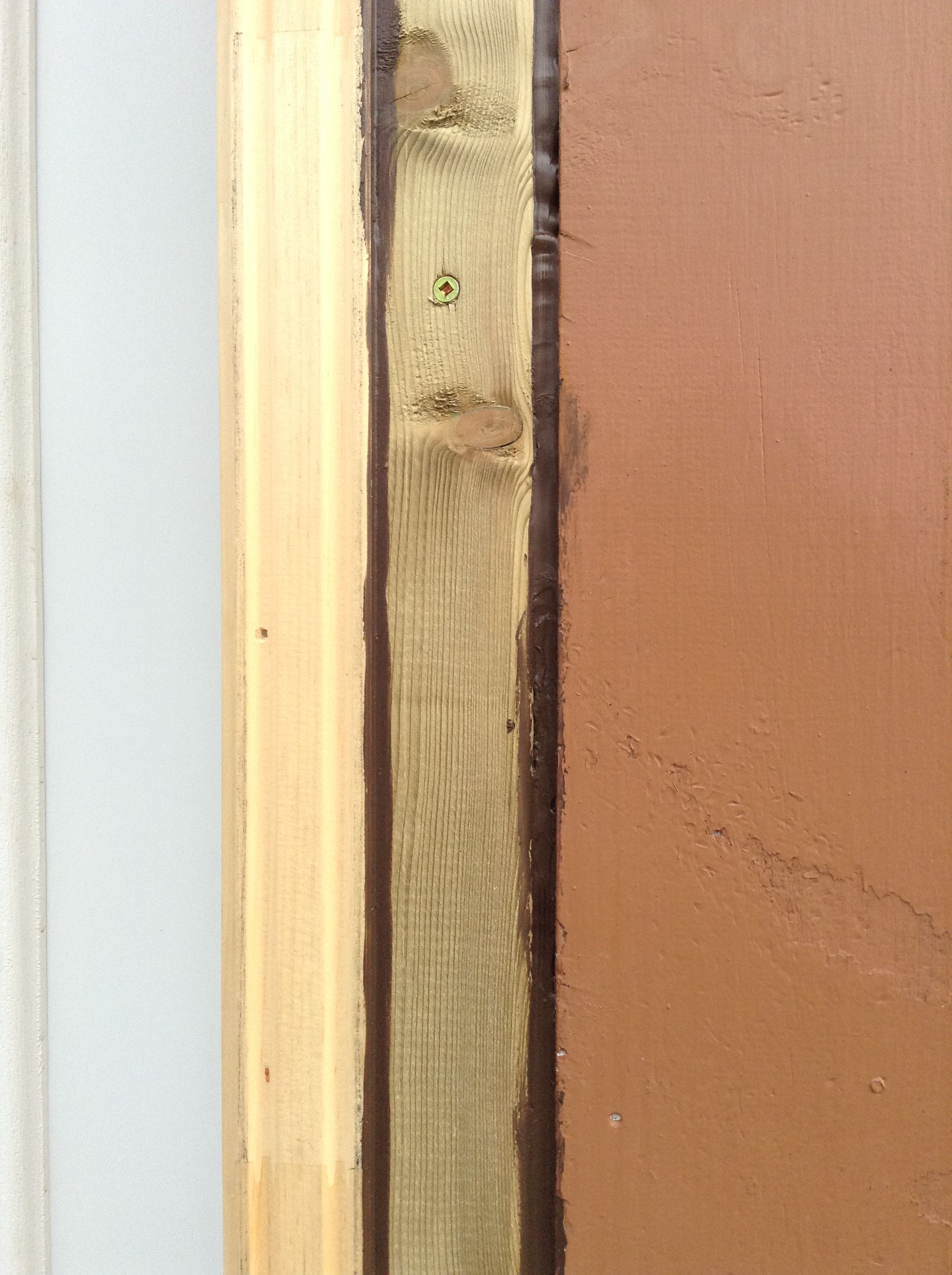 Here is an interior picture of what is left to do.....trim, today's project: 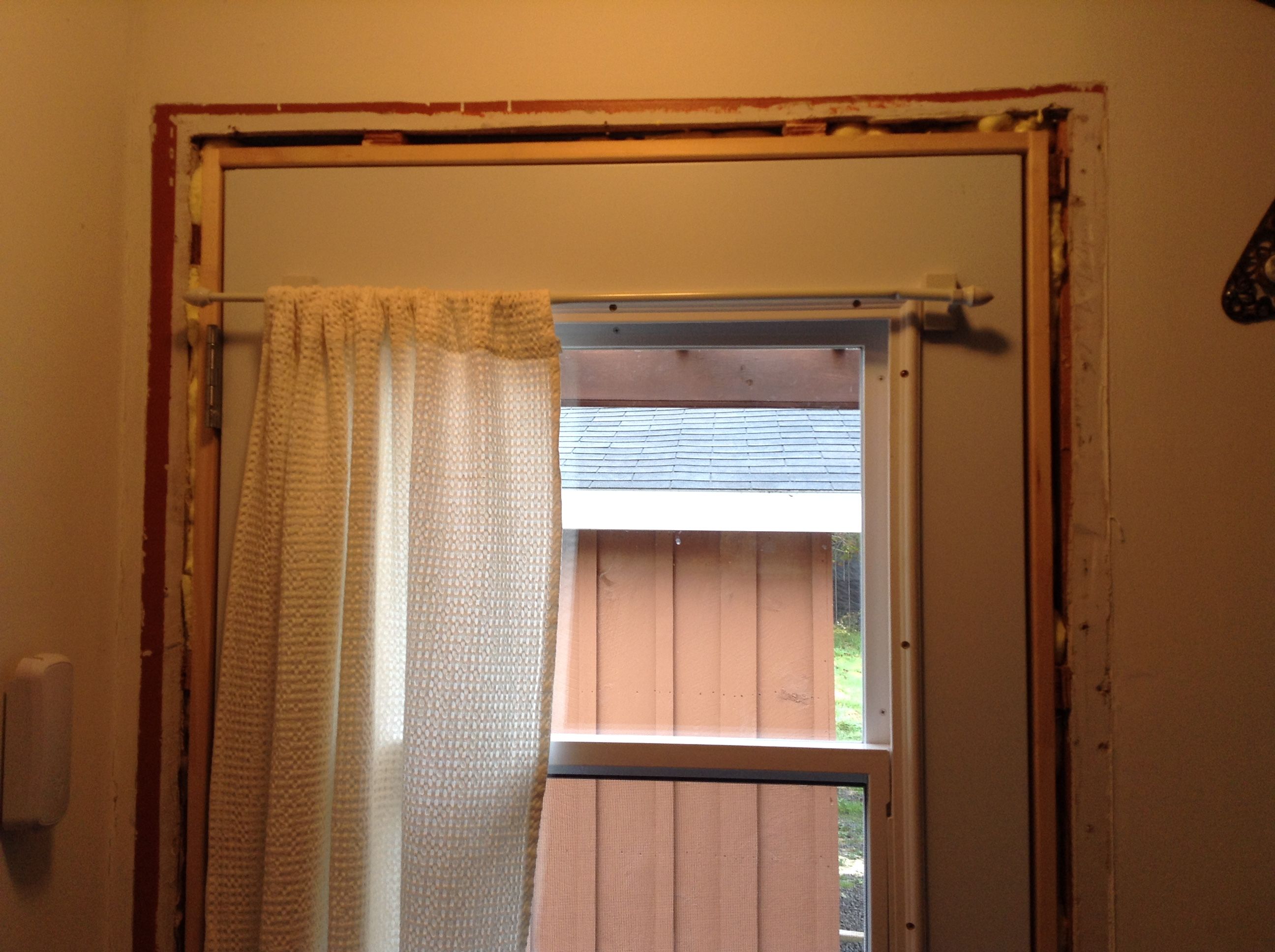 It is going to look pretty neat with the paint. Keep up the good work!

No major problems, which is good! Would not want to spend much time without a door at this time of year.

That was certainly one of my worst fears!

I just found your post and this is so funny.

I am sorry, after I read on I realised you're not joking when you said "When we purchased our home, the entry door was installed backwards." OGM, you're not joking!! Why they installed it inside-out? Couldn't we not ask your home seller to fix it? Anyways, no matter now, you did a great job on fixing the door. Very creative! I couldn't be able to do it.

You are correct, it wasn't a joke but it worked out well. Thanks!

When I saw "I'm a guitar player" and "the door to where?" I thought this was going to be some kind of epic off grid recording studio.. xD

Well, never one to disappoint, behind that door is an epic off grid recording studio! Here is the latest to come out of it: https://steemit.com/soundlegion/@brimax/energy-another-collaboration-with-soundlegion
Hope you enjoy!

Awesome job @brimax. Sometimes on the homestead we get to step out of our comfort zone. Once it is painted, you will have a wonderful new door. Thanks for sharing.

Thank you! I did get the interior trim finished yesterday as planned. Painting is scheduled for Thursday and we should be all done!

Isn't it fun doing the work on your house yourself? :-)
That door replacement worked out pretty well, I'd say.

I do get a feeling of satisfaction when I do this type of thing myself, especially if there is anxiety about doing it and it comes out better than I thought it would.

You are not a plumber, mechanic or carpenter. But I have to say that you did a pretty good job there. Only the paint is remaining. So obviously you did nice work. BTW, you have a talent for these jobs too. So if you ever want to change your profession, you will do good work in these fields too. hehe.
Good luck. Upvoted and following you

Much appreciated, thank you.

I see you don't live in my country, here everything should be iron or steel, if not you will have nothing inside in a hour. 😅

Moving? from a country? that's going to be hard, maybe when I get money with cryptocurrency. 😆

Glad to hear you managed to fit your new door successfully after a few improvised alterations.Great job and once you've finished painting it will look fantastic and hopefully keep the weather out for many years to come. Thanks for sharing.

I appreciate your comments, and thanks for taking a look!

Nice looking white door. I wonder! how would it look in red against light yellow walls.

Not a bad idea, not sure if we'll implement it though!

Loved this post, it will look perfect once the paint work is done, I always say that whether you have your own place or if you live with your parents, one should always input their efforts in redoing and maintaining the house, start by small things, that is how you will be able to keep your home fresh and up to date.

Thanks for taking a L👀K!

Expert job on that door. You are no longer a Homesteader, but now a carpenter! 🐓🐓

Thanks for your vote of confidence!!!

You are welcome. Looks great to me. 🐓🐓

Paint it and it will be fine. 😊

Wonderful home I want to spend some time this amazing home

Congratulations @brimax, this post is the fifth most rewarded post (based on pending payouts) in the last 12 hours written by a Superuser account holder (accounts that hold between 1 and 10 Mega Vests). The total number of posts by Superuser account holders during this period was 715 and the total pending payments to posts in this category was $4402.30. To see the full list of highest paid posts across all accounts categories, click here.

Appreciate you taking a look.