Searching for our Homestead: Property Number 1

biohackerpro (49)in #homesteading • 2 years ago (edited)

As you may know from my first post in this series, my wife and I are on the hunt for our first real homestead. Now by real, I mean someplace located far enough from any town or interstate that I can't see any lights at night other than the stars and moon, and I can't hear anything except the crickets and katydids!

How We Initially Evaluate a Property

We've spent hours and hours pouring through the results of many slow searches online (mostly on LandsOfTexas.com and Realtor.com), expanding our search radius and compromising on search criteria so that we can find "the one". The first filter we use when evaluating a property in the search results is "how big is the house". We need something at LEAST 1500 square feet, preferably 2000 or more. We then glance at the acreage. Originally we set our limit at no less than 30; but we've slowly compromised so that now we're considering anything with 17 or more. If it meets those two criteria, we next do a quick google map to the town it is near to see if it's within two hours of San Antonio. That criteria, too, has recently changed so that anything within a two and a half hour radius is now acceptable. If those three criteria are met, and the initial picture representing the property in the summary looks okay, we then open it up for more details. While my wife scans through whatever photographs of the interior and exterior of the house and its proximity have been uploaded, I set to work attempting to locate the address in Google maps so that I can see the satellite image of the property. While she evaluates the house, I evaluate the land itself. What I am looking for is to first make sure that the property is not all pasture or field, because I need something that is a mix of both field and forest. The field I will use to pasture a few cows and plant a small orchard or vineyard; the forest will be where I will hunt. If the satellite image of the property itself looks acceptable, my final test is to see how close the nearest neighbors and any apparent new development is to the property lines. I do not want to be anywhere near another homestead, so if I see that there are houses too close, the property is ruled out and we won't even go look at it.

So this first property more than met all of our criteria from a web site perspective (it even had a pond stocked with fish), so we set up an appointment to go see it in person! It was a little over a two hour drive from San Antonio, headed East towards Houston then turning a bit south at about the halfway mark (Hallettsville is the name of the nearest town). As if we weren't already excited enough about seeing it, the final five miles of the drive was all dirt road...you can't get any more "in the middle of nowhere" than that!!! Along that last five miles I saw many, many whitetail deer grazing just inside the treeline on either side of the road. A very good sign for me.

We turned onto the private road that is the driveway to the house and the pictures had definitely accurately portrayed it. We were astounded by the giant metal building on the left side of the drive, 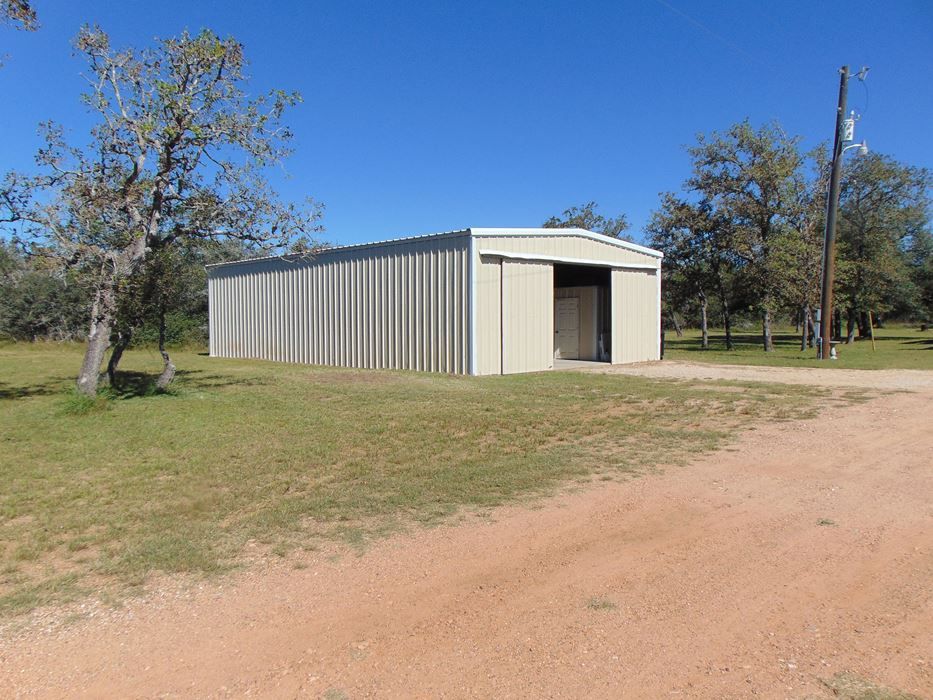 which was probably just as big as the house itself. 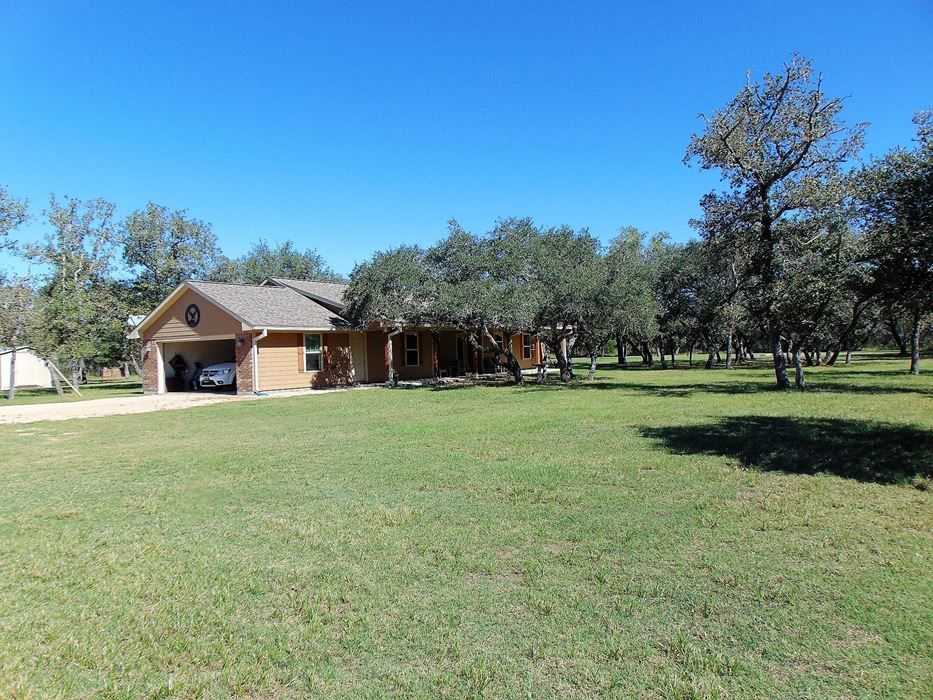 The house had a large covered porch extending the whole length on the right side, 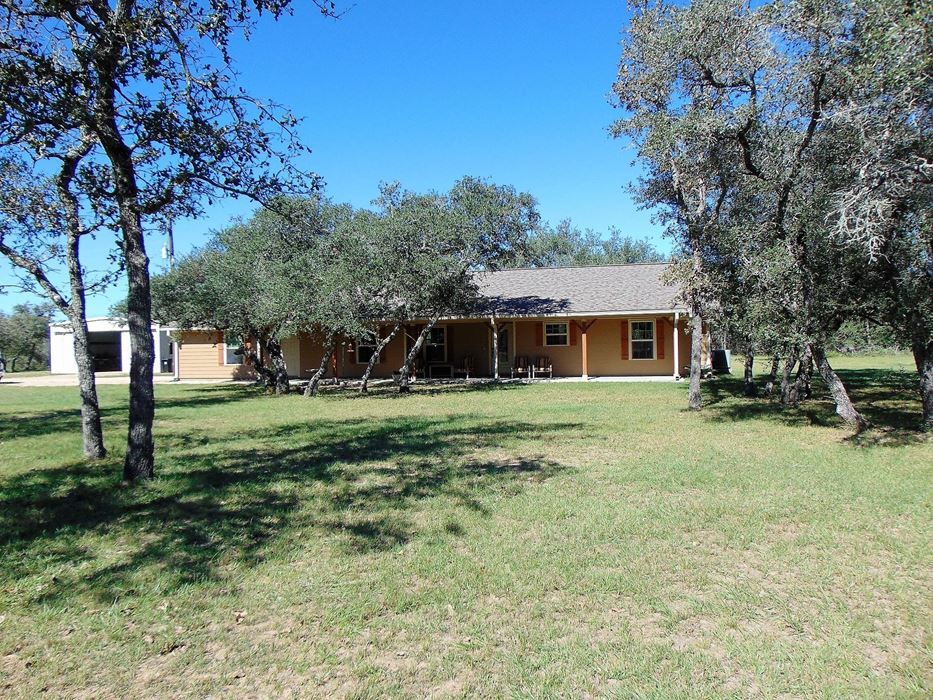 and faced the pond which was literally a stone's throw away. 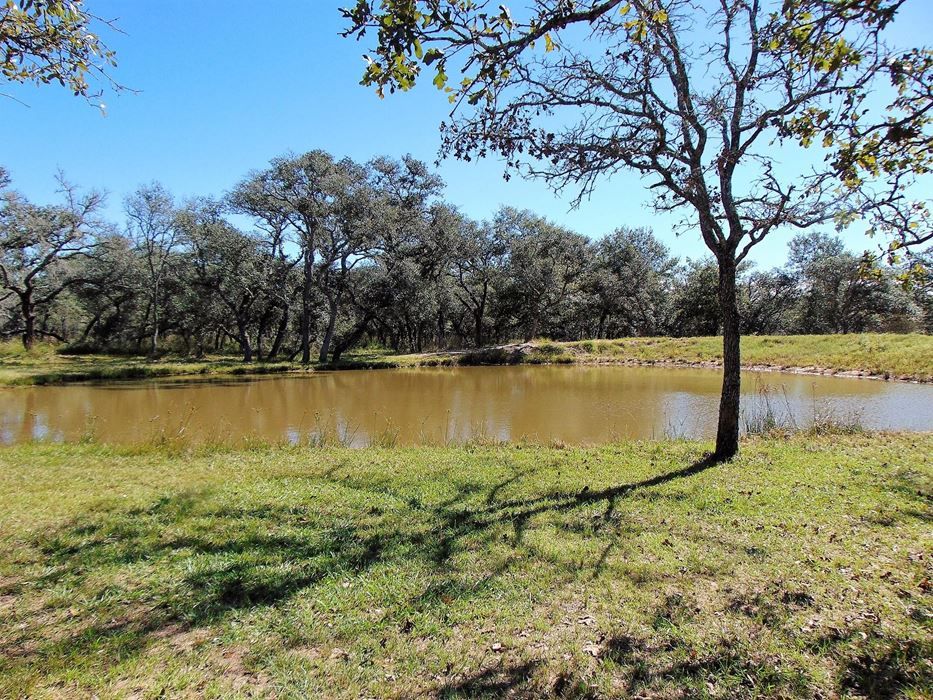 The seller's realtor was already there, so we parked beside him and began the foot tour. Now, normally the owners are never home when a property is shown to prospective buyers. But in this case, they were home due to the fact that the husband was recovering from a very grave illness and could not easily travel. Fortunately for everyone, everybody in Texas (real Texans anyway) is blessed with an innate southern charm and mutual respect, so it was a very warm and friendly greeting when we walked through the two car garage and into the very spacious, modern kitchen. 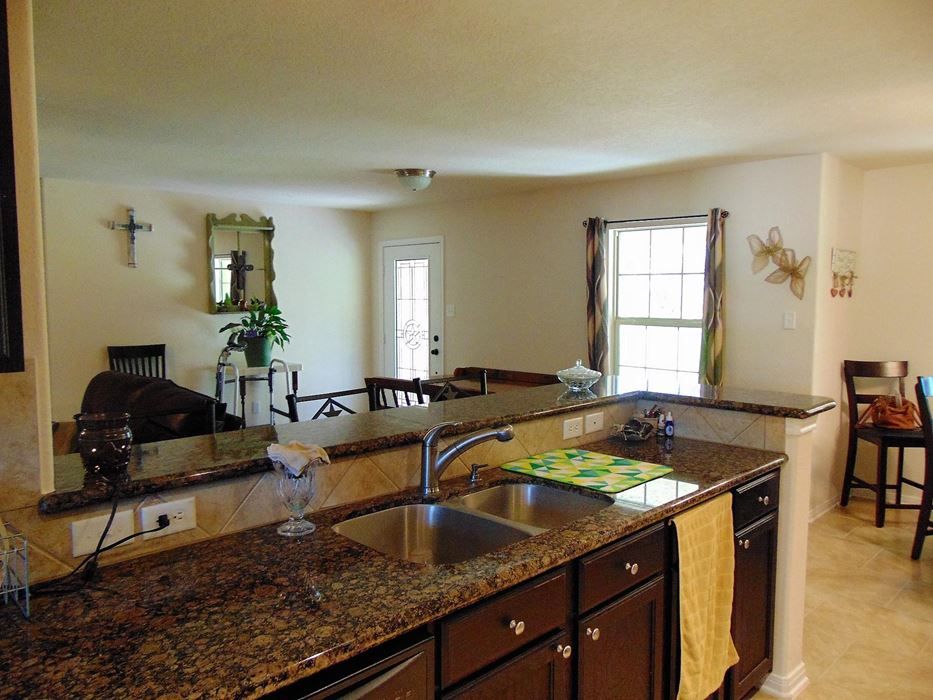 Me personally, I'm not overly critical on things like kitchens, but I was very impressed with its elegance and beauty. The house had been built only 3 years earlier, so was still in pristine condition. We visited with the owners for a time and I was able to ask a few detailed questions, such as if there was internet this far out (there was), how deep the pond was (8 feet), and how many wells were on the place (it had 4, 3 of them capped off but usable). We did a brief tour of the three bedrooms and two bathrooms, 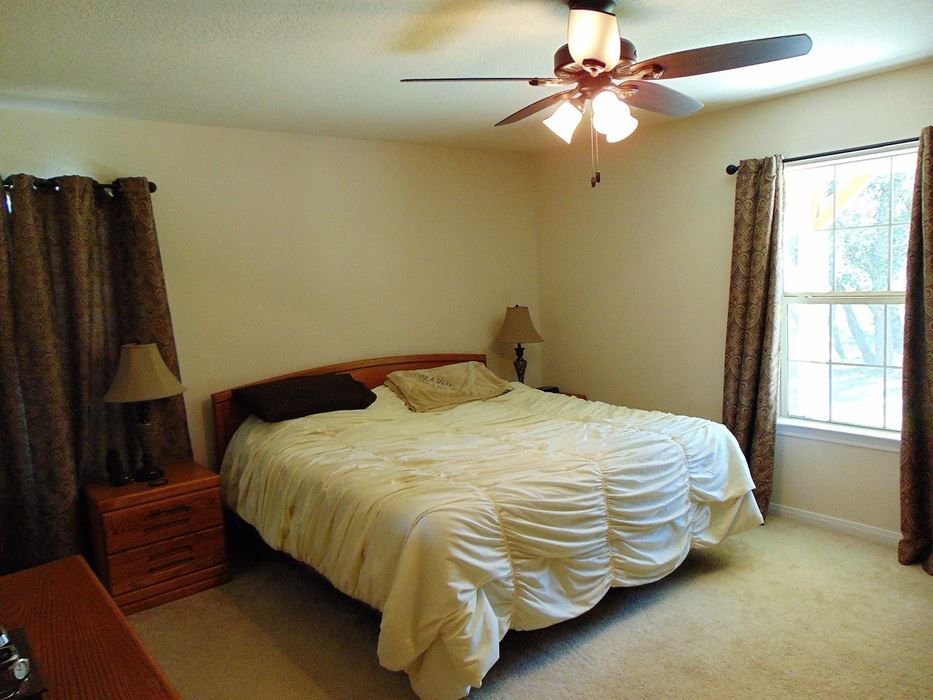 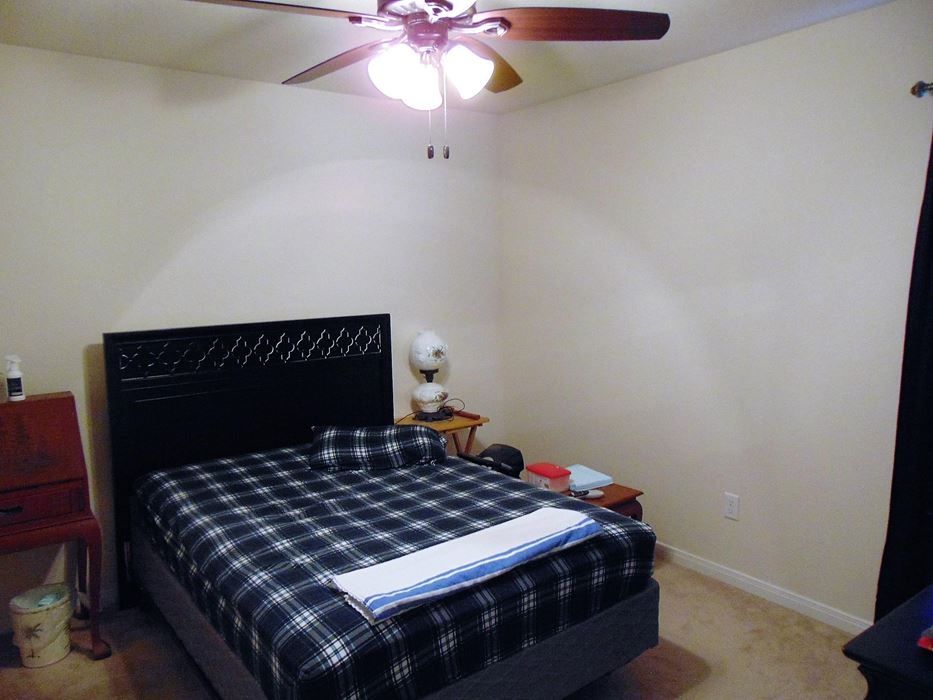 climbed up into the attic to survey the brand new oversized A/C unit, then went outside for a tour of the land itself.

Once back outside, the realtor walked us around the house and pointed out items of note such as the septic area where the lines kept the grass thick and green; the large storage shed; 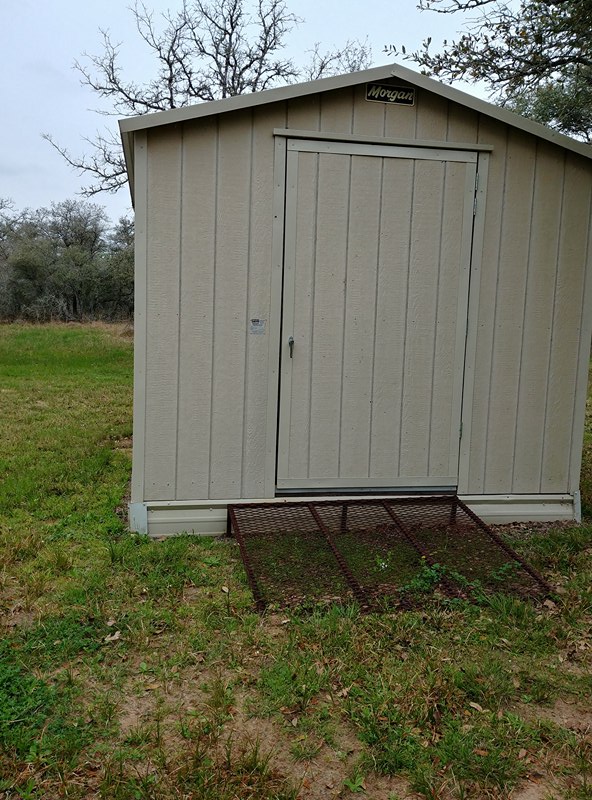 and the large well house which also doubled as a storage shed. 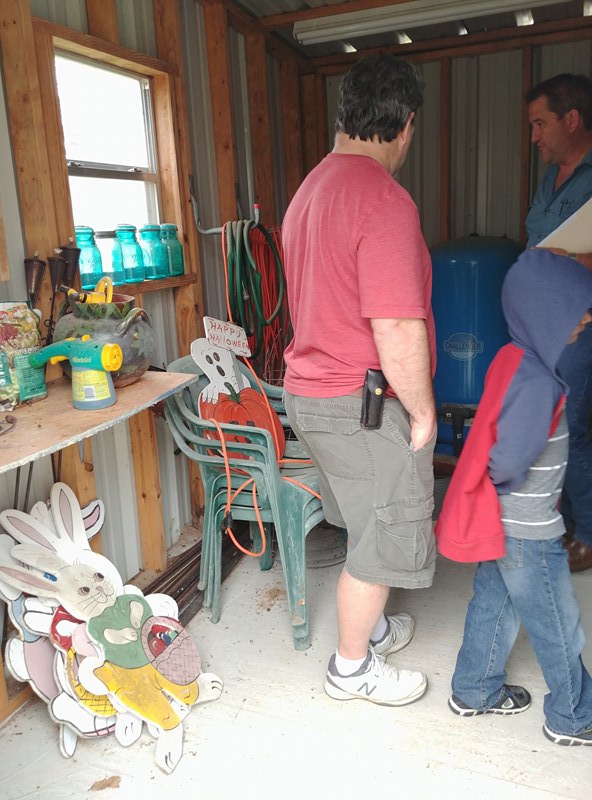 We then went into the large metal building I mentioned before, where we saw that a full bathroom had been installed, complete with hot water on demand. 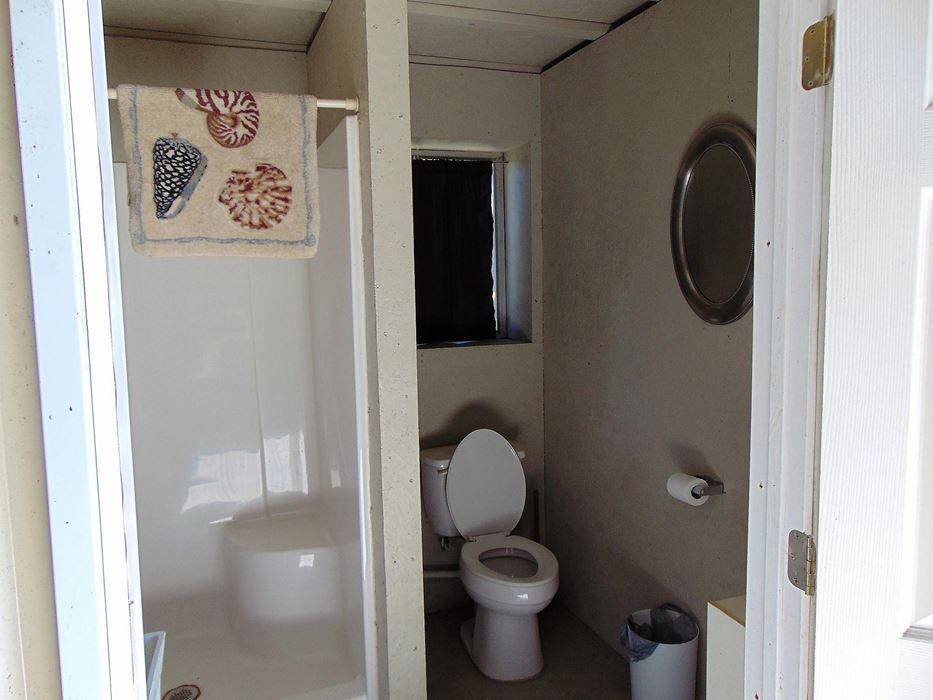 This was undoubtedly so that a person could clean up from whatever activity they had been engaged in before coming back into the house. My mind immediately went to the fact that I could expand that to be a guest room for any visitors we had who didn't mind bunking up out there. The realtor then started up the large four wheeler, and invited myself and Benjamin to hop up so he could drive us around the whole 32 acres. The acreage was heavily wooded, covered in mostly 20 to 50 year old Live Oaks and Pin Oaks, 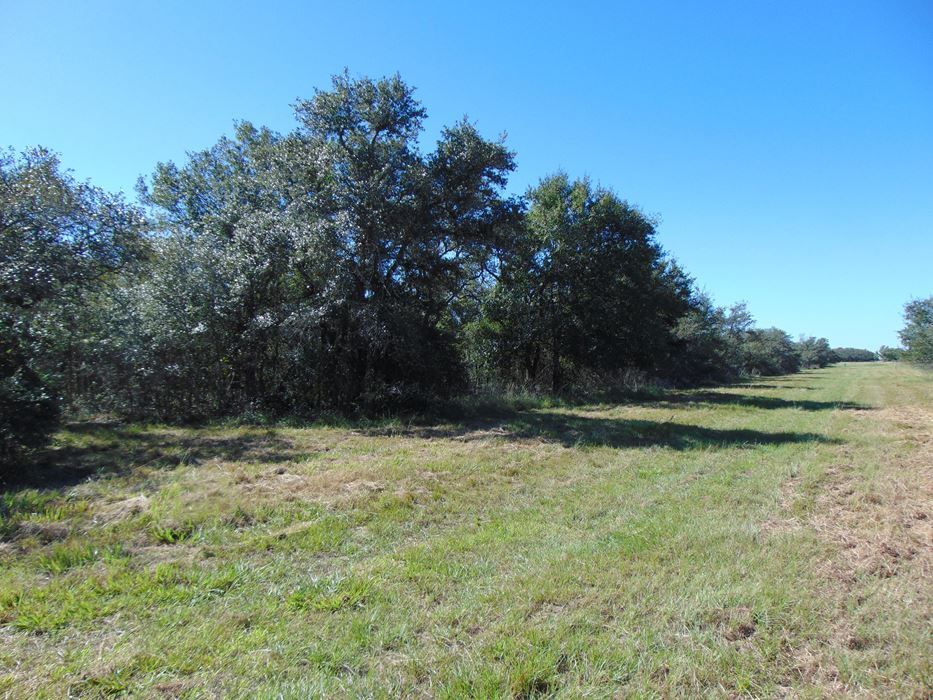 but with a few older ones dotted throughout as well. He stopped to show us an area where the wild pigs had been rooting and wallowing... based on the size of the rooted up area, there were a lot of pigs roaming around there! As we made our way around the perimeter, the realtor pointed out that currently only one third of the property was actually fenced and that we would probably want to complete that project ourselves. He had even had a fencing company give an estimate, so it was going to cost us an immediate $5,000 from the proceeds of the sale of our current home to make that happen. I didn't mind at all though, it would be a good investment in my estimation. We exited the back side of the property onto the private road of the acreage next to what we hoped would become ours, and stopped to see how the pigs had been scratching themselves on the telephone poles there so much that they had worn deep ruts around the base just by walking around and around them! Yeah, there were lots of pigs there. 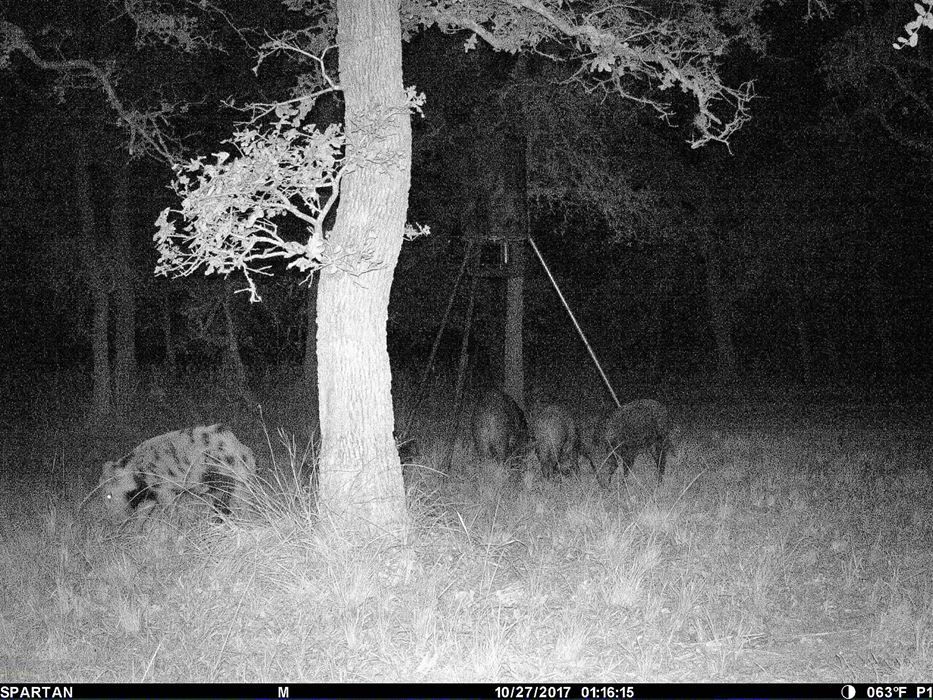 We pulled back into the driveway eventually, and this time Jen got on and he took her for the same tour. We had seen several feeders and blinds set up on our drive, so I knew without a doubt that the hunting aspect of this property was exactly what I was looking for.

Jen arrived back a few minutes later, and she didn't even have to say a word for me to know that she was as sold as I was on this place. The asking prices was exactly the max our budget would allow, but we had no hesitation in telling our realtor later that day to make an offer and give them exactly what they were asking. We waited in giddy anticipation for the next four days to hear back, absolutely sure that we had just bought ourselves the perfect homestead!

Four days later, the answer came. And as are many things in life, it was not the answer we wanted to hear. Even though our offer was higher than another one they were considering, we had one small challenge that the sellers weren't willing to accept: the fact that we couldn't press forward with the purchase until our current house was sold. Now upon arrival, that is the first thing that we disclosed to the agent, and he quickly let us know that it wouldn't be a problem because the sellers were in no hurry to move. When it came down to it, though, it was apparently an issue for someone, and our suspicion is that it was the realtor who pushed them to accept the other offer. You see, the listing contract the sellers had with this agent was about to expire in a couple of weeks, and so we surmise that he thought it better to get some commission than no commission. We'll never know for sure exactly why, but this particular homestead just wasn't meant to be ours.

My wife and I are very patient, and we believe strongly that God will open and close doors as it is meant to be. With that in mind, we focus our efforts more on exercising patience, trust, and patience as we believe it is far more important how a person goes through a situation than what the eventual outcome is. And so, since this first one wasn't "the one", we shall continue on!

You will find the perfect place when it is time. Hey... you might get a call in a couple weeks when the deal doesn't go through. You never know.... Thanks for a good post.

Hey buddy I'm sorry things fell through with this homestead, but like you said when the time is right it will be the reward you have been looking for!

Congratulations, your post was discovered and featured by @OCD in its daily compilation 226!

Looked like a nice place but there are many nice places around. Good luck on your homestead hunt.