A Subway Map of Ancient Rome : Visualizing Past + Present 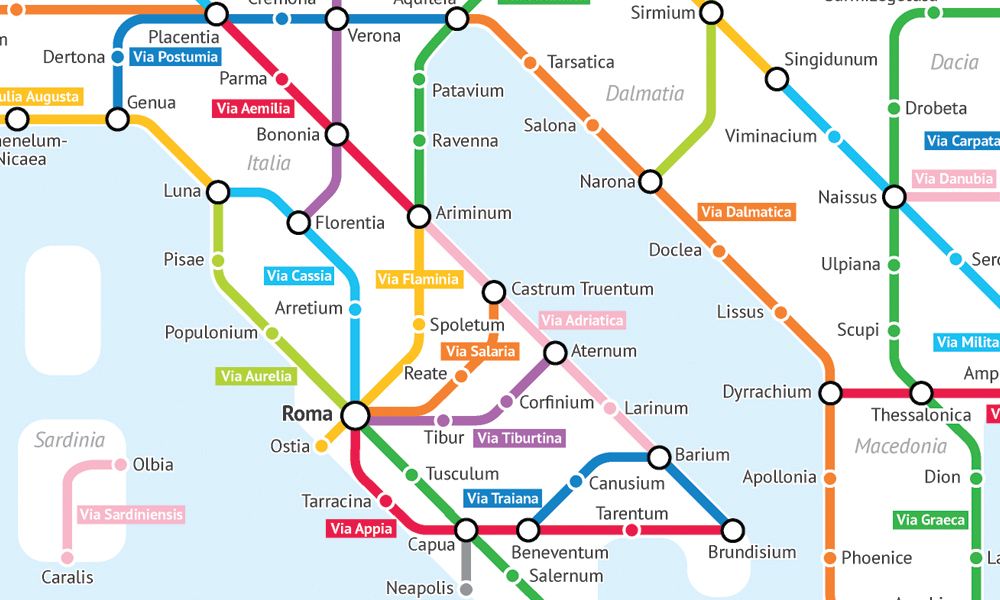 An Empire of Subway Stops:

Have you ever wondered what the Roman Empire might look like as a subway map? Well, wonder no further! Cartographer and statistics major Sasha Trubetskoy combined archives of trade records, maps and journals to compose a diagram of major Roman Roads circa 125 A.D.

You can imagine an orator of ancient Rome announcing the next “subway stop”. I don’t know the latin word for “LOCAL” vs. “EXPRESS” but mixing up the two could be the difference between a weekend journey or a lifelong odyssey. If you fall asleep on the Via Popilia Green Line you might wake up in Regium... Man, I really do hate when that happens. Trubetskoy’s subway diagram is the latest interpretation within a long legacy of Rome-mapping. This curious practice has been most famously captured by a 13th century monk living in Colmar, France.

Back in 1265 A.D, the “Tabula Peutingeriana” or Peutinger Table was drawn into existence. The massive map of ancient Rome was drawn on eleven sheets of parchment measuring 13 ⅓” wide and a staggering 268” long. (Or 0.34 x 6.82 meters). This enormous rectangular map warped geography in order to fit everything within those peculiar dimensions. The map is composed of six colors in all, black, red, green yellow blue and a rose color depicting different routes and time periods. Experts are still in debate over the authenticity of the geography depicted. There are regions on this map that imply an Empire on the move towards the east (further than archeological records can validate) and there is little else to support the extent of that expansion. Like many maps of this time period, they could very well have been illustrations used to exaggerate and validate political ideologies. Nevertheless, the Table is a fascinating and revealing depiction of a massive Empire.

The Peutinger Table is now held in the Nationalbibliothek in Vienna. 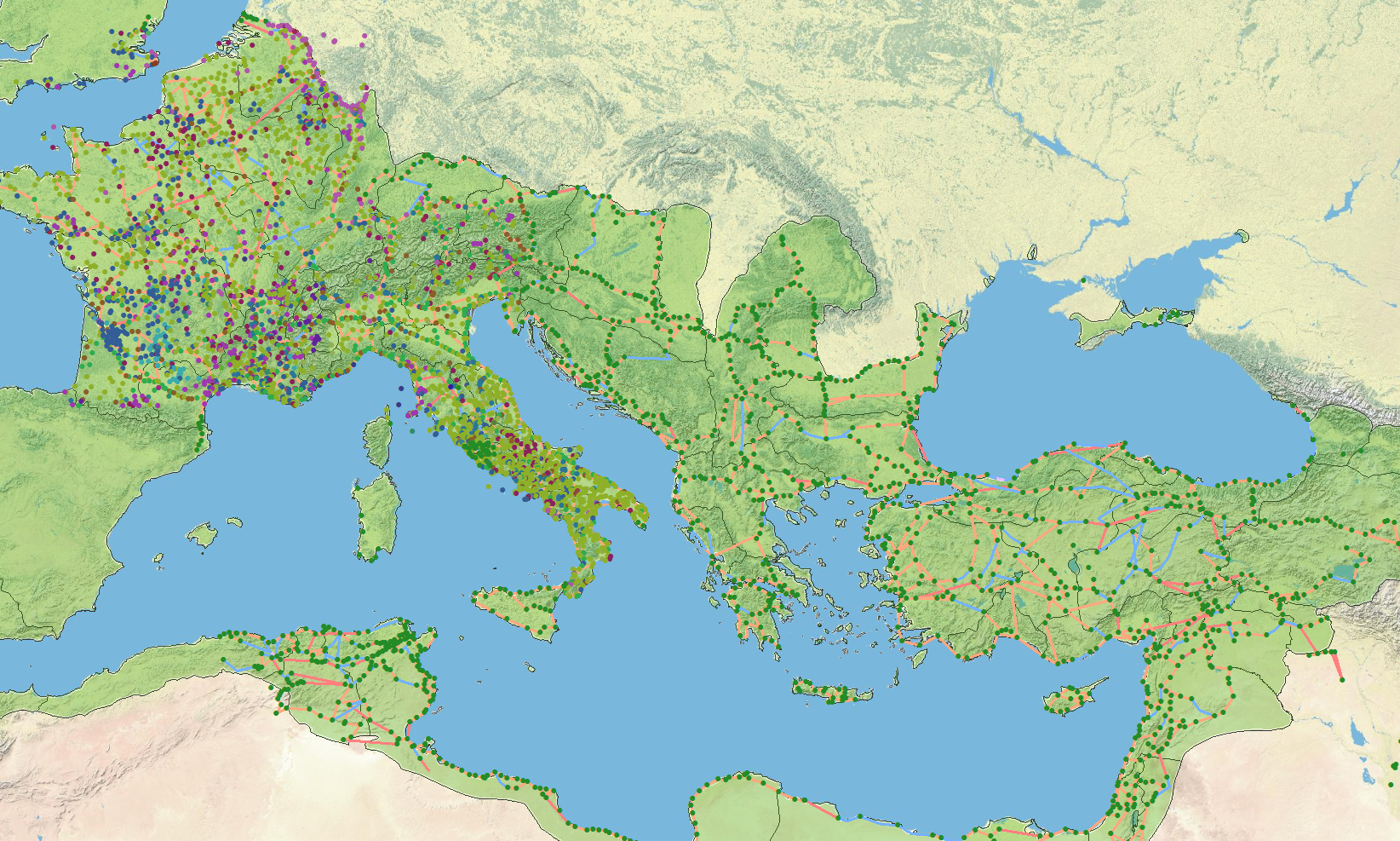 This map (above) translated the Peutinger Table into a geographic database and mapped location according to their true (or estimated) geography.

There are a handful of other interesting resources where you can explore the Roman Empire, including Stanford University’s ORBIS project and the Pelagios Project by Johan Åhlfeldt. With these tools you can visualize an ancient network of cities and geographies.

For example - through ORBIS you can literally calculate travel times according to month, season and expense. A trip from Roma to Xanthos in July will take approximately 14.2 days by carriage, covering 2,217 kilometers. Using denarii (the local tinder of the time) you can also get estimates of what it might cost per passenger. On this particular trip, it would cost 381.17 denarii per person.

ORBIS, The Stanford Geospatial Network Model of the Roman World (above).
See a snapshot of The Pelagios Project (below).

They say that All Roads Lead to Rome…

Enjoy and explore some of the Ancient Roman Resources below :

This is awesome. I'm a Latinist and love learning of new resources to continue my education. I suck at geography, so this post is like a heaven send.

For the Latin, I'd go with "Locale" vs "Celere" since you're talking about an announcement. The Latin word for "express" has the meaning of "expression," while "celere" means "fast" --> it's where the word "accelerate" comes from. :D

Thanks for the kind words and thoughtful feedback. Amazing to learn of these Latin roots, and seeing Ancient Rome visualized in subway-map form... so much of this ancient society has permeated into modern life today. Cheers @finleyexp

I don't know where you were headed in the web when you came across the Ancient Roman subway maps, but I'm glad you decided to post about it. I think it's fascinating to see how people meld history with modernity. Thanks again @voronoi!

That's fascinating, thanks for sharing. I do enjoy a bit of interesting cartography every now and then, and that ORBIS thing is very cool.

Toying around with the ORBIS tool is really fun... it's kind of like that old computer game "Oregon Trail"

hahaha that's awesome! As a fan of Roman history, I now have my new screensaver image :) Thanks for sharing that, you made my day, re-esteemed !

Haha, great! Thanks @herverisson I'm glad you enjoyed it :D

There is so much we can learn from the Romans. As long as we don't repeat the mistakes of the Romans. Can we learn from ancient history? Thanks for sharing - Troy

Always more to learn from history. Digging more into the details of the past can always yield better lessons for us to live by and improve from.

When you are in rome be like rome. Lol i am a roman now. Upvoted you :-)

Thanks for sharing. Upvote and resteem

I actually rode the subway too. Got me where I wanted to go so can't complain. Thanks for another interesting post.

So glad you enjoyed the post! The subway in Rome has been a work in progress for years... every time they try to survey a new potential stop they run into an archeological site that no one knew existed. I never really took the subway while I was there but glad it got you from A to B :)

Love that second picture, as a Rome and NYC fan. Think I'll desktop image it for a bit. Thanks!

Super cool @voronoi! I think maps are so fascinating not only because they show you how to get from one place to another but they highlight the most used ways for doing it - An important thing when talking about history! Also maps make really cool artwork. Not the point of the article I know but just an aside :) Cool post.

I really enjoy these old maps, it's so facinating to see how geography has been depicted (artfully) over time. This won't be my last map post ;)

Hey, thanks for the kind words! Glad you enjoyed it :)

How interesting!! I such did not occur!!

I love this, very well connected by the looks of it :-)

This is cool, I used to live in Rome - their subway stinks...

Their IRL subway is pretty terrible!

This is an incredible idea! Thank you for sharing