In our ongoing engagement with what non-profit organizations are and what they could be, our class has arrived at the concept of public trust, especially as juxtaposed with the market economy. @jfeagan and @connellgregg both wrote about this push and pull, and got some ideas going in my head.

Because ethics are hard to illustrate, I'm going to just include a bunch of GIFs of Chidi, the ethics professor on NBC's "The Good Place"

Then I came across the U.S. Department of the Interior's Departmental Ethics Office and its list of "Basic Obligation of Public Service". I was struck by the Jefferson quote in the preamble: "When a man assumes a public trust, he should consider himself as public property."

Setting aside the 18th century gendered language, this is a pretty radical statement about what it means to work for the public good, and one that seems to remove agency from someone in such a position. As a nascent public historian, I have already had to explain the "public" part of that identity many times. I've often talked about how I see my history work as public service, but what would it mean to personally identify as a public trust or public property?

Here's what the Department of the Interior thinks it means for government employees: 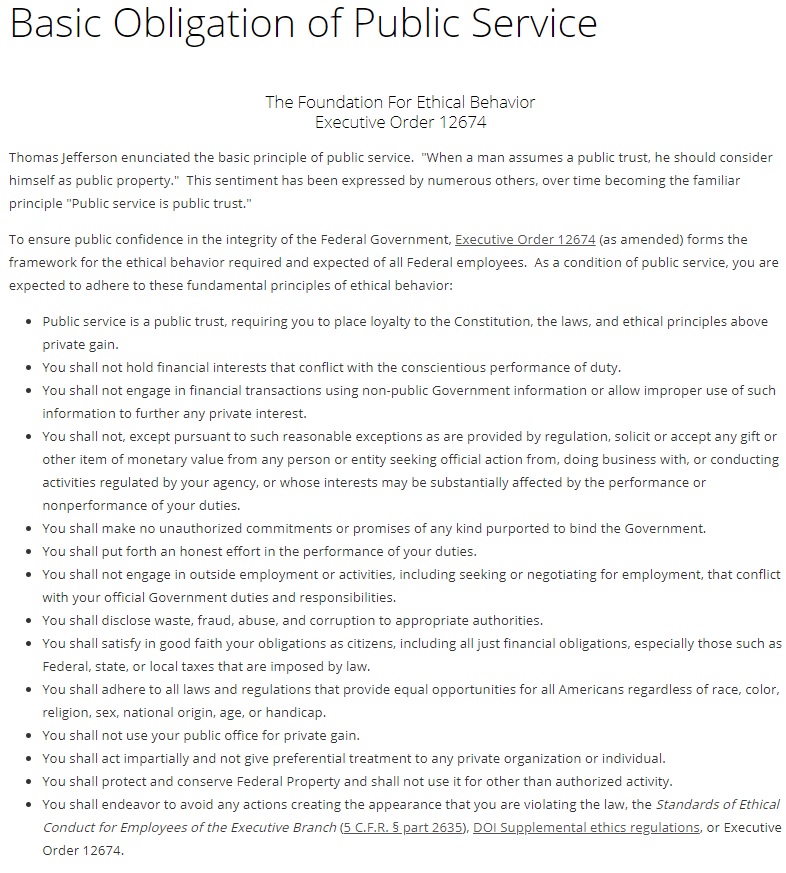 Most of these ethical standards are very similar to the ethics codes of the American Alliance of Museums and the Association of Art Museum Directors, but there are a couple of points from the DOI statement that I don't recognize in the AAMD and AMA statements:

"You shall not, except pursuant to such reasonable exceptions as are provided by regulation, solicit or accept any gift or other item of monetary value from any person or entity seeking official action from, doing business with, or conducting activities regulated by your agency, or whose interests may be substantially affected by the performance or nonperformance of your duties."

"You shall act impartially and not give preferential treatment to any private organization or individual."

In my limited experience with the internal workings of museums, the role of donors is typically exactly the kind of transactional relationship that the DOI is seeking to avoid. The museum ethics statements mitigate this somewhat by talking about conflict of interest and invoking the idea of public trust, but they don't weigh in on specific methods of funding exhibits or how to choose exhibits when funders are involved.

For instance, is it ethical to launch an exhibit underwritten by the artist? Within the DOI framework, it seems clear that such a transaction would at best be subject to other legislation (which I'm not conversant in), if not prohibited.

The Code of Ethics of the National Council on Public History is actually an interesting comparative case to these other statements, engaging more broadly than the museum ethic codes, but also including more references to the "public interest."

Of any of the statements, the NCPH code engages most with the market economy because many public historians work as consultants and contract workers rather than within institutions, yet it does not really engage with the inherent tensions between the public interest or trust and being for sale.

There are scholars who have teased apart some of these dynamics. In The Lowell Experiment, for instance, Cathy Stanton examined the role of National Park Service historians (DOI employees!) in essentially a capitalistic enterprise even as they sought to criticize historic abuses of capitalism. Perhaps this sort of critique does not fit the format or requirements of a code of ethics?

If ethical codes of museum professionals and public historians emphasize the importance of the public interest without including guidance about how to operate (and survive!) independent of a market economy, they do a disservice to their profession and lead to the public debates (and debacles) over deaccessioning we've seen in the last few years. Responding to such controversies by brandishing those same ethical codes thus seems somewhat irresponsible and unhelpful, as it does nothing to prevent the next deaccessioning kerfuffle.

Great post, and 10/10 for outstanding usage of Chidi .gifs!

I personally love the Jefferson description of people working for the public trust as public property. One of the many reasons I came to Temple's Public History program was because I believed in the connection between public history and public service. The subsequent connection between public service and its ethical implications, which you outlined well above, is where things seem to fall into the moral/ethical gray areas for many institutions.

Go to this post and scroll down to "And for some Adventures in Ethics we turn to @tmaust."