Leonardo is the definition of a Renaissance man. He was an expert in multiple areas, one of which was the creation of weapons of war.

One of my first series here on Steemit was writing about Leonardo. Today I wanted to focus on his land weapons.

In 1482, Leonardo (a pacifist) became employed by the militant Duke of Milan. While under the Duke's employ, many different weapons were designed and constructed. 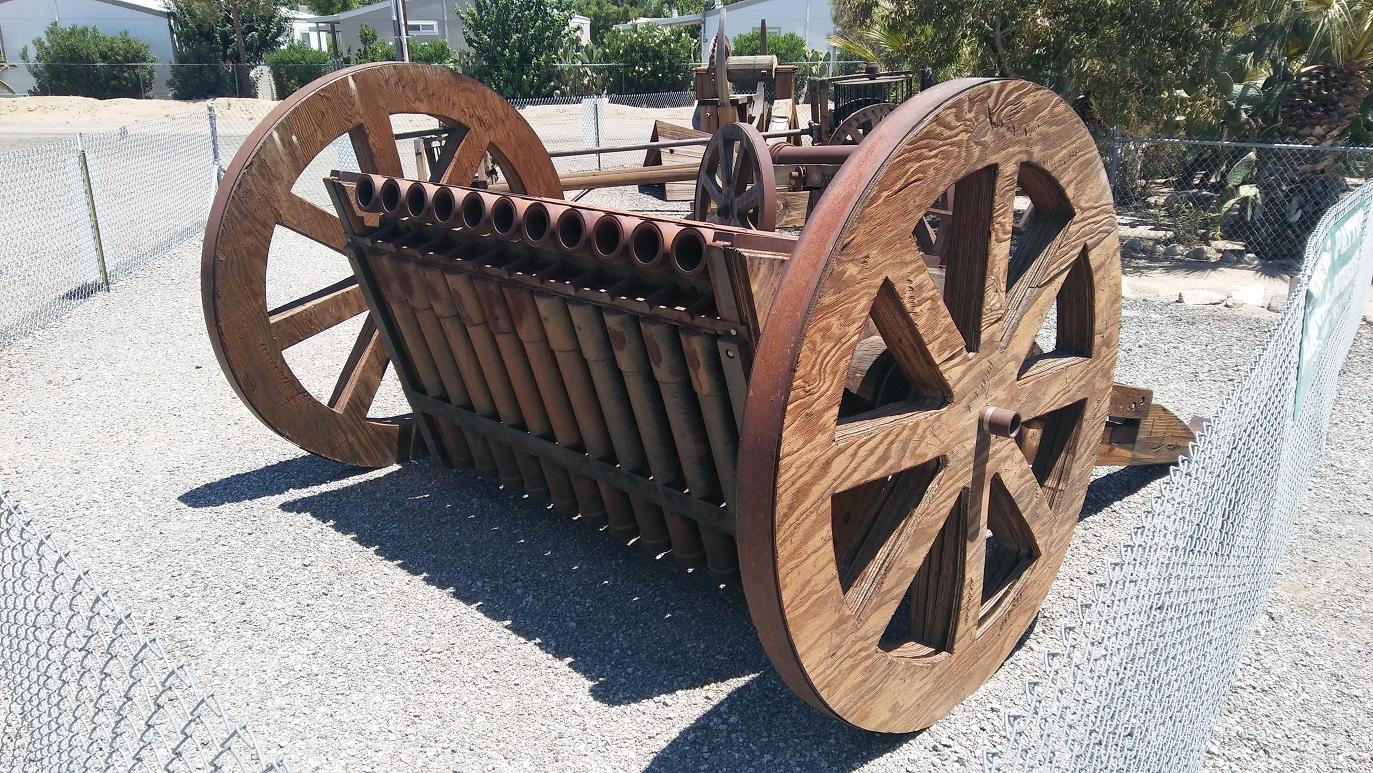 The way Leonardo saw them, the problem with the cannons of the time was that they took far too long to load. His solution to that problem was to build multi-barreled guns that could be loaded and fired simultaneously.

This idea forms the basis of this 33 barreled organ, which featured 33 smaller-caliber cannons connected together. The cannons were divided into three rows of 11 guns each, all connected to a single revolving platform. Attached to a pair of giant wheels for mobility.

All the guns would be loaded and then the first row of 11 would be fired. The platform would then be rotated to properly aim at the next row of cannons. The idea was that while one set of cannons was being fired, another set would be cooling, and the third set could be reloaded. The system allowed soldiers to repeatedly fire without interruption. 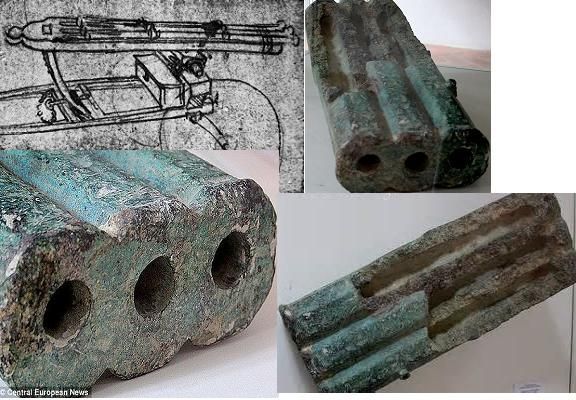 Leonardo designed this device to be much lighter than the 33 barrel cannon so as to be mobile on the battlefield.

Having three barrels was his way of compensating for slow reload times, it was loaded from the front and each barrel could be fired independently. The cannon was also able to be elevation adjusted for aiming purposes. One of these was discovered in a fort in Croatia in 1968, the only known surviving Da Vinci invention. 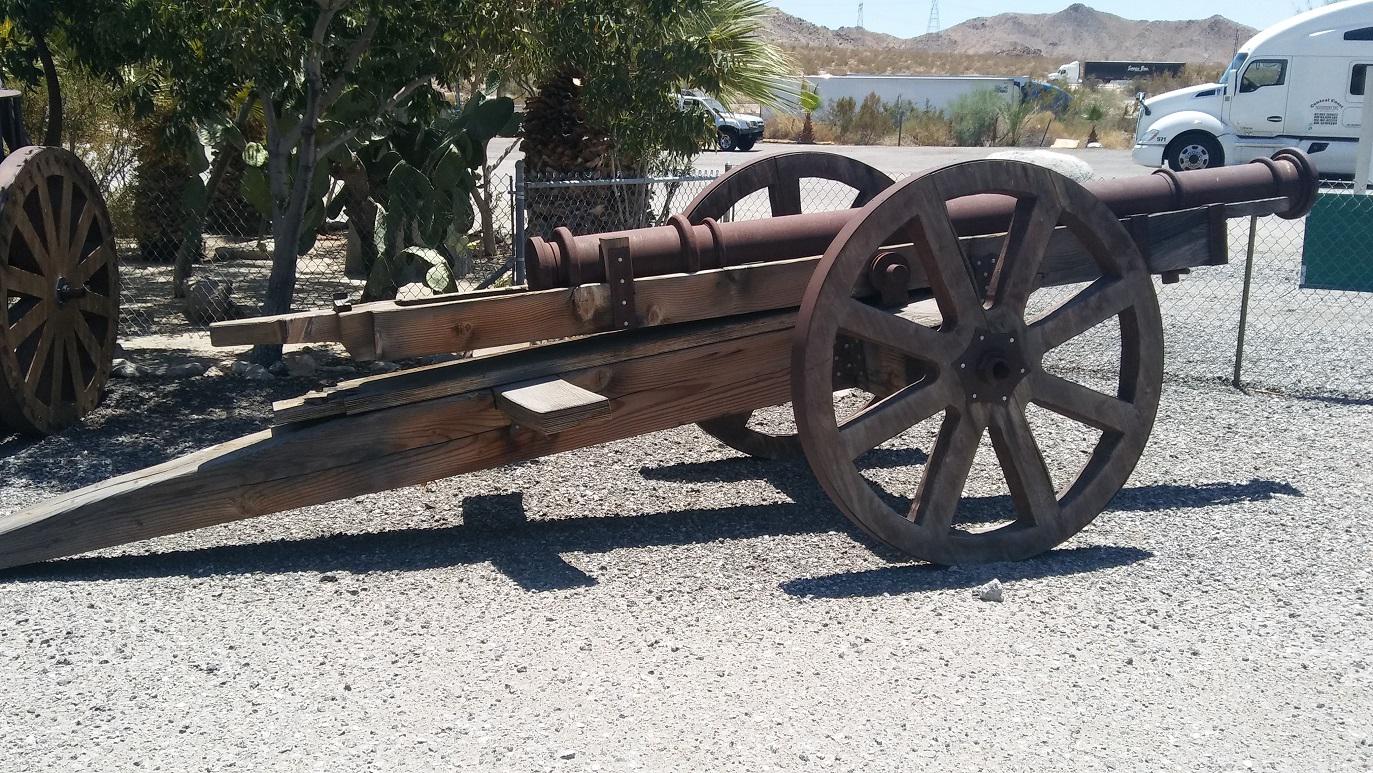 One thing we do know is that Leonardo designed breech-loading cannons. They required a fast means of being cooled before another firing, and Leonardo calculated that a vat of water would do the trick. By using several of these cannons in a rotation, soldiers could be firing one, loading another, and letting the third one cool. Nothing gets a war hungry leader going like HUGE weapons. One of Leonardo’s sketches shows a mammoth cannon that is being moved through a foundry by dozens of men who are dwarfed by the size of the thing. This sketch takes up a whole page, very unlike Leo’s normal engineering diagrams, so it was most likely drawn to impress the Duke.

It is probable that Leonardo knew of the Great Ottoman Bombard said to be responsible for the fall of Constantinople in 1453, as his drawing is similar in design. The Ottoman cannon was claimed to weigh 700 tons and take 100 bulls and 100 men to move and operate it. It could fire a 1.2 ton stone ball 1 mile. Imagine that thing smashing into your house.

He also invented a way to load and unload this for an army on the move. Since the carriage on the battlefield had to be strong to handle the recoil of this thing firing, it was heavy and more awkward to move – especially over long distances. Leonardo created a system to easily remove this from the battle carriage and transfer it to a wagon cart for travel using a hoist system. Without the weight of the cannon the battlefield carriage would be much easier to bring along, increasing the speed of the march. 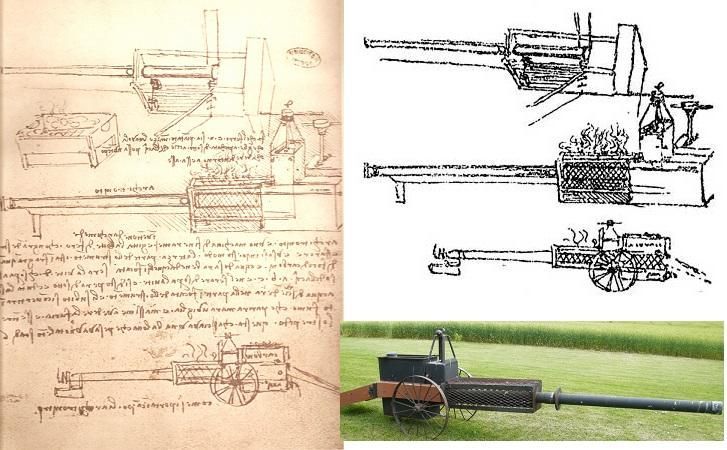 Leonardo said ”Invention of Archimedes (during the siege of Syracuse 214-212BC) — The Architonnerre is a machine of fine copper, which throws balls with a loud report and great force. It is used in the following manner: One third of this instrument contains a large quantity of charcoal fire. When the water is well heated, a screw at the top of the vessel which contains the water must be made quite tight. On closing the screw above, all the water will escape below, will descend into the heated portion of the instrument, and be immediately converted into a vapor so abundant and powerful, that it is wonderful to see its fury and hear the noise it produces. This machine will carry a ball of a talent (32kg) in, weight."

A typical cannon of Leonardo's time was fitted with a cannonball that was fitted very approximately. This meant that a lot of the power of the shot was lost due to the poor fit and that accuracy was minimal.

Leonardo designed a projectile with a very modern appearance. Bullet shaped instead of a round ball. Some were even drawn with fins for stability.

He was the first to measure the penetrating power of a missile and to ascertain how to vary it by changing the attitude. During these tests he managed to launch a rocket-powered cannonball an estimated 10,000ft into the air!

Leonardo also came up with this design of a cluster bomb. Packed inside a tightly stitched leather ball were a number of smaller orbs filled with grapeshot. Upon firing, the large first ball would open during flight, then the smaller balls would disperse in a small cluster of bomblets until the final impact when the grapeshot would explode out and cause terrible damage to the enemy.

While this looks like a waterwheel it is in fact an automatic crossbow loading system. He created two versions, one with 4 crossbows and one with 16. It was designed for four men, behind a protective shield, to move along the top of it and a series of gears, pulleys, and ropes caused the cord of the bow to be tightened with every rotation. The 16 crossbow version was powered by hand cranks. 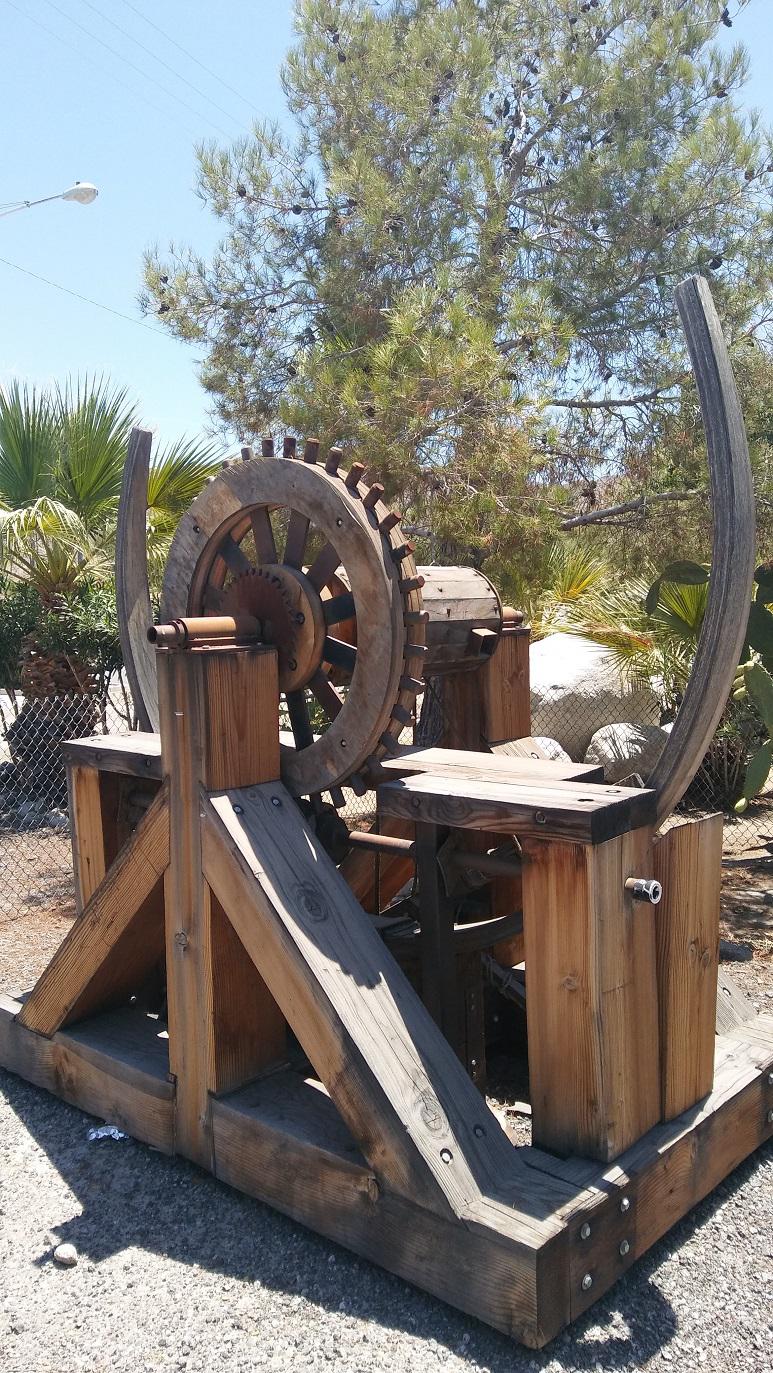 The basic design of the catapult had been in use for hundreds of years before Leonardo decided to improve upon it. He came up with many different models. This first design uses a double leaf spring to produce an enormous amount of energy in order to propel stone projectiles or incendiary over great distances. Loading of the two large leaf springs was accomplished using a hand crank on the side of the catapult. 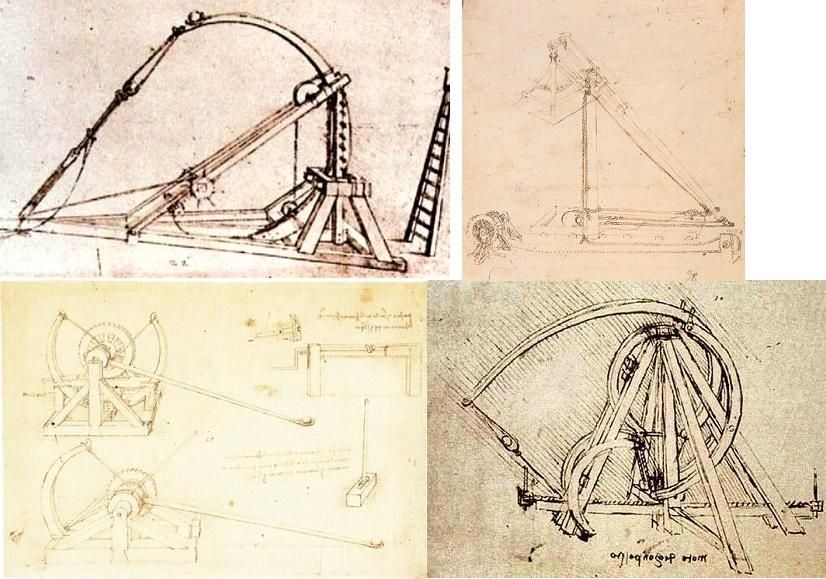 His quick load catapult only had a short range but made up for it in the rate of fire. With this catapult, a man climbed a ladder and placed a stone in the cup. Then the flexible arm was bent back using a rope and winder mechanism. It was released by striking a pin and then the procedure was repeated. Look at this thing! Eight arms holding slings that would hurl stones at your enemies. It worked by having two or four people winding a system, not unlike two crossbows. The winding would bend the crossbow heads down, tightening a rope around a central pole. When released (Da Vinci rightly made the release mechanism active by pulling on a long rope, so to be nowhere near it when it went off) the rope would unwind, spinning the pole and the arms attached to it. When it spun fast enough, the slings would send the stones flying! Where to? All over would be my best guess. This was designed to be a cheap defensive weapon. Needing only wood and rope and a few metal parts in key places, like the release pin, to build it. 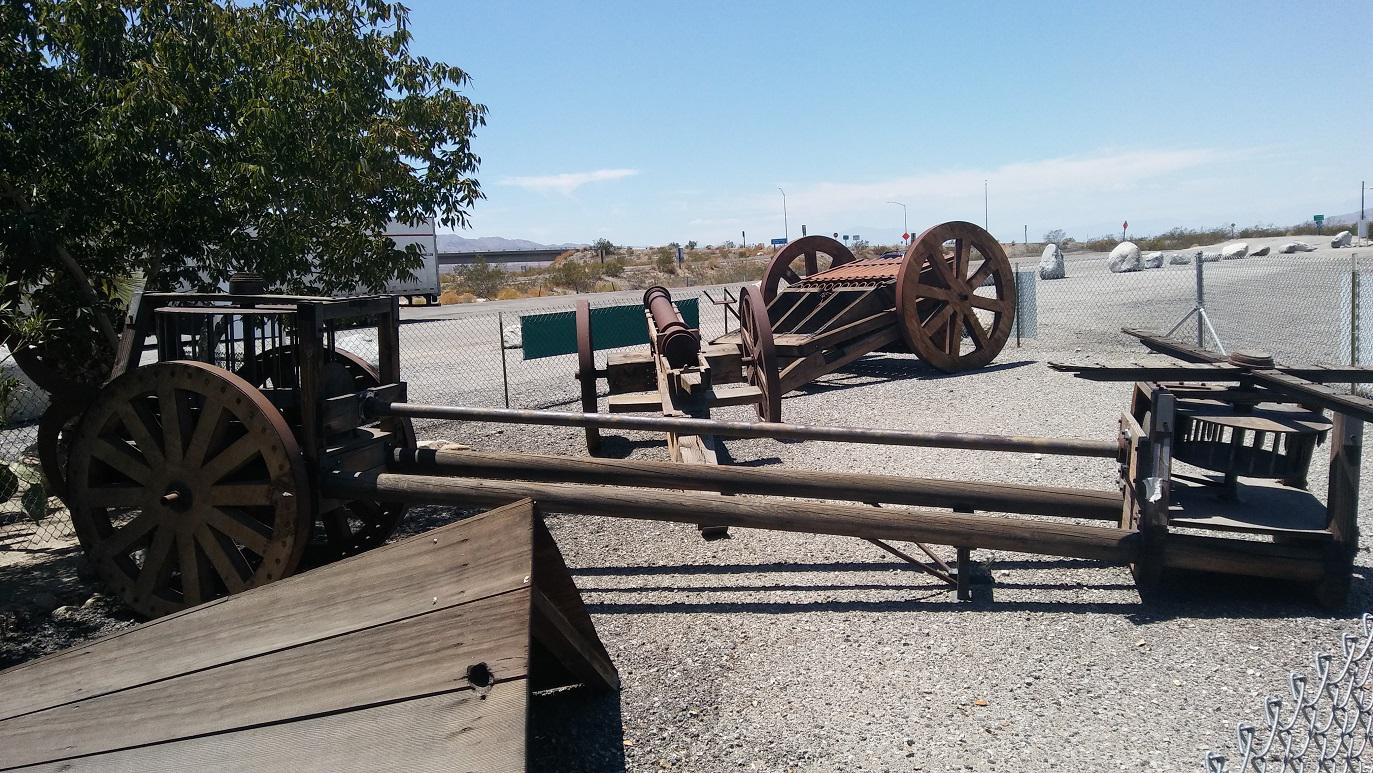 Four large scythes were mounted in a manner similar to helicopter blades. When it was drawn forward, a series of gears and shafts would transfer the motion from the wheels to the blades and rotate them. It would then slice the limbs from its victims, leaving them bleeding and helpless on the ground. Leonardo's sketch of this weapon depicts fallen soldiers in their death throes.

Designed in 1487, this creation featured 32 light cannons all the way around, wood planks reinforced with metal and slanted to deflect shots, and a top turret for visibility. It was designed for 8 men to operate and fire the guns. Leonardo initially considered using a horse to move it, but was concerned about how the animal would react inside the vehicle.

This would have only been able to be used on flat, solid ground as any rough terrain would have made it nearly immobile. If you study the design of the gears the way it is drawn the forward and rear wheels would operate in conflict, people believe this was done intentionally in case his designs were stolen. It is not believed to have been built in Leonardo’s time, but a British team built one for the BBC in 2002.

My favorite picture is the 7th one.

I find it sad that leonardo was involved in creating weapons of destruction ♦♦ Certainly, I admired some of his other creative works/inventions (like the Flying Machine)

And his art, of course -- I like the drawings you show of his, near the end of your post - Bravo, for including so much detail & graphic work.

Thank u for a fine post [will likely re-steem ] ..

Have a good & productive wkend

Thank you @janashby, I love the sketches that Leo did even more than his art masterpieces. I appreciate the resteem :D

It really helped that Leo was a master artist before he ventured out into the other fields. He was able to draw his visions so well, which helps us today see it for the amazing creations they were.

I actually saw them use his tank design in the show "Da Vinci's Demons". I think they used other designs of his aswell in that show :-)

Yeah, I remember an episode with the 33 gun organ as well as one with the giant crossbow (it was a decoy of sorts to scare an invading army).

Great show, even if a little far fetched at times. :D

Yes, I loved the show! Been a while since I last watched it :D

Lots of neat ideas by the inventor of inventors.
To bad they didn't have the manufacturing capabilities to turn most of his ideas into a well working machine.

Leo was certainly a man ahead of his time. Who alive today would you say has a future vision like Leo? Elon Musk?

Thanks for the RT!

Ha, my posts last year were top quality works with tons of research. At least in my eyes.

Hey junius, thanks for checking out my stuff.

He is very illuminated and clever person and artist. I visited an exhibition about his inventions. That was amazing.

Oh, that sounds like a fun visit. The things he imagined were amazing!

Awesome thanks for this, I like the catapults best!

Well, it was back when armies stood in lines. By having three rotating volleys, it was almost like this one gun was worth three!

Cool. Are you into documentaries?