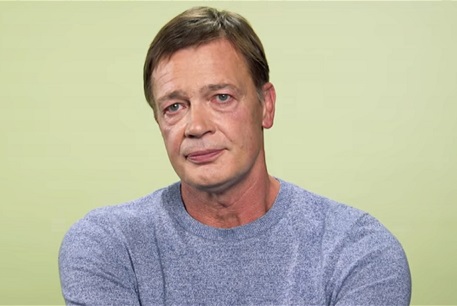 Brave speech of Dr.Wakefield deserved to be translated to every language on the planet Earth. Brave Brave Man deserves a Nobel Price for waking up the world population.

I want to talk about the heard immunity briefly because it's a very important concept and something upon which vaccine mandates are largely dependent.

The perceived need to maintain a level of immunity in the population using vaccination to prevent exposure of those who , for example can't be vaccinated. They're too young or they've got some immune compromised due to cancer chemotherapy or steroids or something like this.
And it's a very important thing to understand and to be able to articulate in a way that one can debate with those who maintain that herd immunity is sort of central tenet there of why we should mandate vaccines for children.

Now the question would be is what would have happened if we'd never vaccinated ?
If you'd followed the natural trend of that curve, it was approaching zero.

** Would it have gone to zero in the absence of vaccination?**

And the answer is very likely yes. That was that natural trend.
Of course we'll never know, because we intervened with vaccination.

The question is why?

Why was case fatality rate and morbidity the seriousness of the infection itself and it's complications falling so dramatically?

And this is down to pattern of exposure, these are socioeconomic circumstances. So one of the serious , one of the risks of serious adverse outcome from measles is the intensity of the exposure, the amount of virus that you get. And as family sizes decreased slum dwellings decreased, children sharing beds and bedrooms declined, the intensity of exposure dropped. And over time not only did the intensity of the exposure drop but nutritional status improved.
So vitamins such as C, as D and A improved,and all of these helped immune defenses. So, what we were seeing was a decline, a natural decline, in the seriousness of the infection long in advance of vaccines coming in.

And that was an example of natural herd immunity.

It was operating to protect babies.
And the other part of natural herd immunity was maternal immunity, passive immunity from the mother.
The mother exposed to measles herself as a child develops lifelong immunity and then when she's pregnant she gives antibodies transplacentally and in breast milk postpartum to her baby that protect him or her through the first year of life.

That is natural herd immunity, an example of it.

Because the baby is at greatest risk of an adverse reaction to measles in the first year of life intuitively because their immune system is not adequately developed.
At least in part.
So that natural herd immunity from the mother protected the infant during that susceptible period.

Now, what has happened in the face of vaccination, is that natural herd immunity has been destroyed. What we now have are mothers being vaccinated as children, not contracting natural measles, giving very, very poor passive immunity to their babies and that baby, then being susceptible to measles in the first year of life.

So we have destroyed that part of natural herd immunity as an unintended and unexpected consequence of vaccination.

Now, you could argue that if measles were to come back, precisely because of the effects of vaccination, we would have a lot of babies who were susceptible to measles and problems with that infection.

This is a problem that can be ascribed to the vaccine program itself.

Mumps was historically contracted at around the age of five to seven by children who then developed lifelong immunity. Mumps in children is a trivial disease.
It's acknowledged to be a trivial disease and indeed the CDC and the Department of Health in the UK determined there was no need for a mumps vaccine because it was so mild and its complications were not serious.
But nonetheless, for commercial reasons I believe, a mumps vaccine was foisted onto the population and has been made mandatory for many.
Now, because the vaccine does not work in enough people or for long enough, then what we see is the reemergence of mumps in older populations, in teenagers and college students. And the problems arise because mumps is a much more serious disease in, for example, post-pubertal males , where they can develop testicular inflammation, orchitis and sterility.

So a mumps vaccine that doesn't work is not only a useless vaccine, it's a dangerous vaccine because it destroys natural herd immunity, that is the exposure of individuals when the disease is mild, and displaces it up to a susceptibility to disease at a time when the disease is severe or more severe.

So not only have we destroyed natural herd immunity to mumps with vaccination, we have made mumps a much more dangerous disease than it was historically.

The other example, looking at live viral vaccines, is chicken pox.
There was a disease, a right of passage, a trivial disease for so, so many children,
where it was decided that, initially to keep mother in the word place, ergo for economic reasons, that there should be a chicken pox vaccine, that wasn't very good propaganda.
So it became more serious than we thought. Suddenly it changed. The sort of the messaging around the chicken pox vaccine.

But what happened with chicken pox is a DNA virus that's able to persist in the body
and come back as shingles.

A very severe and unpleasant condition. Now typically seen in those
who are immuno-compromised or elderly patients.

Shingles was extremely rare in children and those who were otherwise healthy.
Now what happened was is the immune system was regularly boosted against chicken pox by exposure to children and grandchildren who had natural chicken pox. So not only had you contracted it as a child, but then you had this intimate and wild-type boosting, it's called, due to exposure to your children and grand children. And that kept the immune system boosted and the virus under control.

And what happened when vaccination came in is that natural pattern of chicken pox epidemics disappeared, the immune system was no longer boosted, the immunity to chickenpox waned in individuals and the virus woke up again and it causes shingles. So we now face an epidemic of shingles.

Not just in people who are immunocompromised, or the elderly, but across all age spectra and that's very, very disturbing. Because it's a very, very unpleasant condition. And that again, is an unintended consequence of vaccination, which is operated to destroy natural herd immunity.

And the response of that is to, by the companies, by the manufacturers, is, And so they will look at every cloud as having a silver lining, clouds which they themselves have created. But there you have just three examples of how natural herd immunity operated in the pre-vaccine era and has been destroyed by the process of vaccination.

And finally, as just a sort of side not, we are told that you require 95% immunity within a population conferred by the vaccine to protect against the resurgence of an infection like measles.

That must be nonsense because they're talking about children.

So this whole concept of herd immunity, which relies upon the children, 95% of the children being vaccinated does not take account of the many, many millions of adults who are no longer immune.
Who are, nonetheless by their criteria, capable of contracting and transmitting these infectious diseases.
Does it happen? No. So, the very foundation of mandatory vaccine laws, in other words the need to protect the unprotected by virtue of a mass vaccination uptake, is so deeply flawed, so deeply flawed on many reasons.

But the anxiety for me, as much as anything, is that we have destroyed natural herd immunity. And have we created populations that are now in some way dependent upon these flawed, deeply flawed, vaccines and vaccine polices?

And what happens now when a virus escapes the immunity conferred by the vaccine
or a bacteria, such as pertussis, which we're seeing.
So now pertussis has escaped in many the immunity conferred by the pertussis vaccine.
Nature abhors a vacuum and so you create these mutants that then become the dominant strain for which we have no immunity.
What happens when the superbug comes along as it has done with antibiotics and bacteria and we no longer have an answer for it?

So we are creating, I believe, an invidious position for future generations in dealing with infectious disease by virtue of not having thought through this issue very, very carefully and learned from our experience with antibiotics before embarking on what is a very hazardous vaccine program I believe. 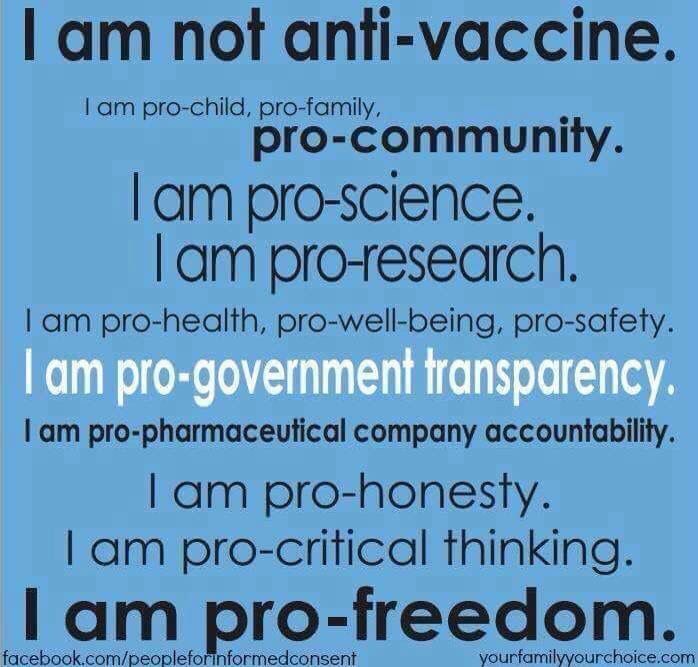 Frankly, it's clear you've done as much research from reliable resources as you've spent time rereading this piece that you wrote. Not much.

When we have safe, tested immunizations that the majority of people take, we can almost eliminate unnecessary diseases. The reason people focus the argument on children is because they don't have a choice about being vaccinated -that's up to their parents. If you have children, I sincerely hope they're properly vaccinated for their own health.

I changed my mind about the vaccination after I read the material from the Medical University.
Material is the collection of the texts with topic of vaccination from all subjects on the University in 5 years of someone's studying.

It just blow my mind ... I don't have any other words to describe my feelings.

All I wanted is to have more info and that was the reason why I read that material.
In total one student of Medical University is reading during his study's around 30 000 pages of various subjects and there is only I will repeat only 19 pages all collected from different subjects about the vaccination.
And that is it ... it is only those 19 ... as much as you want to be more there is nothing ... nothing
Everything in those 19 pages is pure controversy , speculation , everything just not proper medical science.
I dont't know what so say ... the same doctor which is seating on the other side of the desk and recommending you vaccination was studying only those 19 pages regarding the vaccination and somehow he has more authority over the one seating over.
The subject I am constantly thinking after that is not vaccination it is psychology.
I just can't understand Why ?
Why would you defend science which you are not able to defend for what reason ... I can't wrap my head around that ... just can't
And yes I read the entire scope of subjects regards the vaccination from the Medical University itself. Unfortunately it is not a big read at all.
Most of the time I was spending searching the same texts..
Please have a look into the subject I don't know is there a bigger and more important subject in the world today . Everything what doctor Wakefield is talking in this transcript is a pure fact nothing else.