Every year I prune my blueberry bushes to encourage large plump berries and to keep my bushes under control. I’ve trimmed them in the fall, late winter, and early spring but I believe early spring right before the bush is ready to bloom is probably the best time.

I’ve read that blueberry bushes can produce for 50 years or more and the individual canes can produce for several years before dying off. If I have a bush that is sparse and has been producing large buries but not particularly a lot of them, I encourage some new canes to grow to allow the bush to fill in a little. On the other hand, thick overgrown bushes that produce tiny berries get cut back and thinned hard until the berries become larger.

These pictures may be difficult to make out but here are my two largest bushes before pruning: 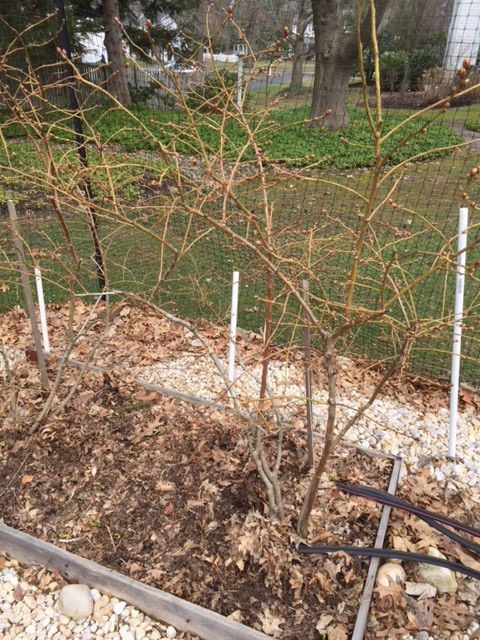 And here they are afterwards: 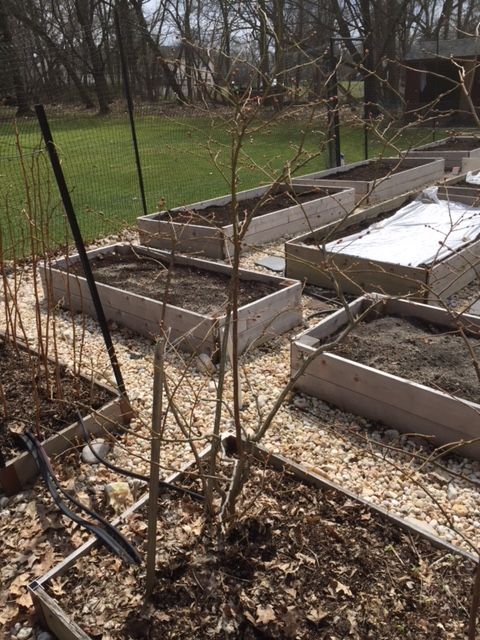 Generally, when pruning I thin out a lot of the small branches and also cut back some of the higher canes so I don’t have a problem getting my nets over them later.

Thanks for reading and please share any tips you may have on growing blueberries.

Would you recommend the same thing for aronia, arony (not sure how it is spelled) bushes. I have a really big one but it has the smallest amount of berries.
Would this help to produce bigger fruit?

I never grew aronia but I would give it a try. Any suckers coming up from the ground should be cut and try some light thinning to see if it makes a difference.

They are growing great with minimal demand, the only thing they need is water. Two years ago the berries were as big as blueberries, but last year was really dry and they were almost dried wile being on the plant.
If you need any I could ship them to you.

Thanks for offering but I will be rolling in berries very soon. I have strawberries and raspberries also. Enjoy your aronia berries and good luck.

Great pruning advice @garden-to-eat. But how do I GROW them? I love blueberries. But here on our South African homestead the famous Cape Gooseberry is an absolute weed (not complaining ;) and our blackberries also do well. But no matter how much I pamper little sad blueberry they don't get more than knee high....and then die. Any suggestions?

Check the PH level of your soil. Blueberries like acidic soil so I would start with a mix of peat moss if you can get it along with compost and top soil.
Then mix some form acidifier to get your PH level down to between 4 and 5. Feed the plant with some organic fertilizer in the spring and lightly in the fall.

Excellent. Thank you so much

they're drunkards aren't they?

Berries and herbs have to be kept under control for sure.