What can I say about Rune Factory 4…. Well, not too much since I’ve never actually played the it. One thing I can say about it though is that as a farming simulator/ RPG type game it’s not exactly my cup of tea.

It is however one of my wife’s favorite genres so she happily agreed to play through it to completion and tell me all about it along the way. So the following will be mostly based on what I took away from our conversations during and after her play through.

I initially picked up Rune Factory 4 as a Christmas gift for my wife and wrapped in what I can only assume was the most extravagant and beautiful wrapping paper (complete with bow). Now, it’s been a couple of years but I believe she played through to the end of the first story arc before I unceremoniously tore her away from it to play something else with me. This of course led her to shelf it for a bit.

When it was recently dusted off and taken for a spin again my wife definitely seemed eager to restart her character and play through the game in its entirety. 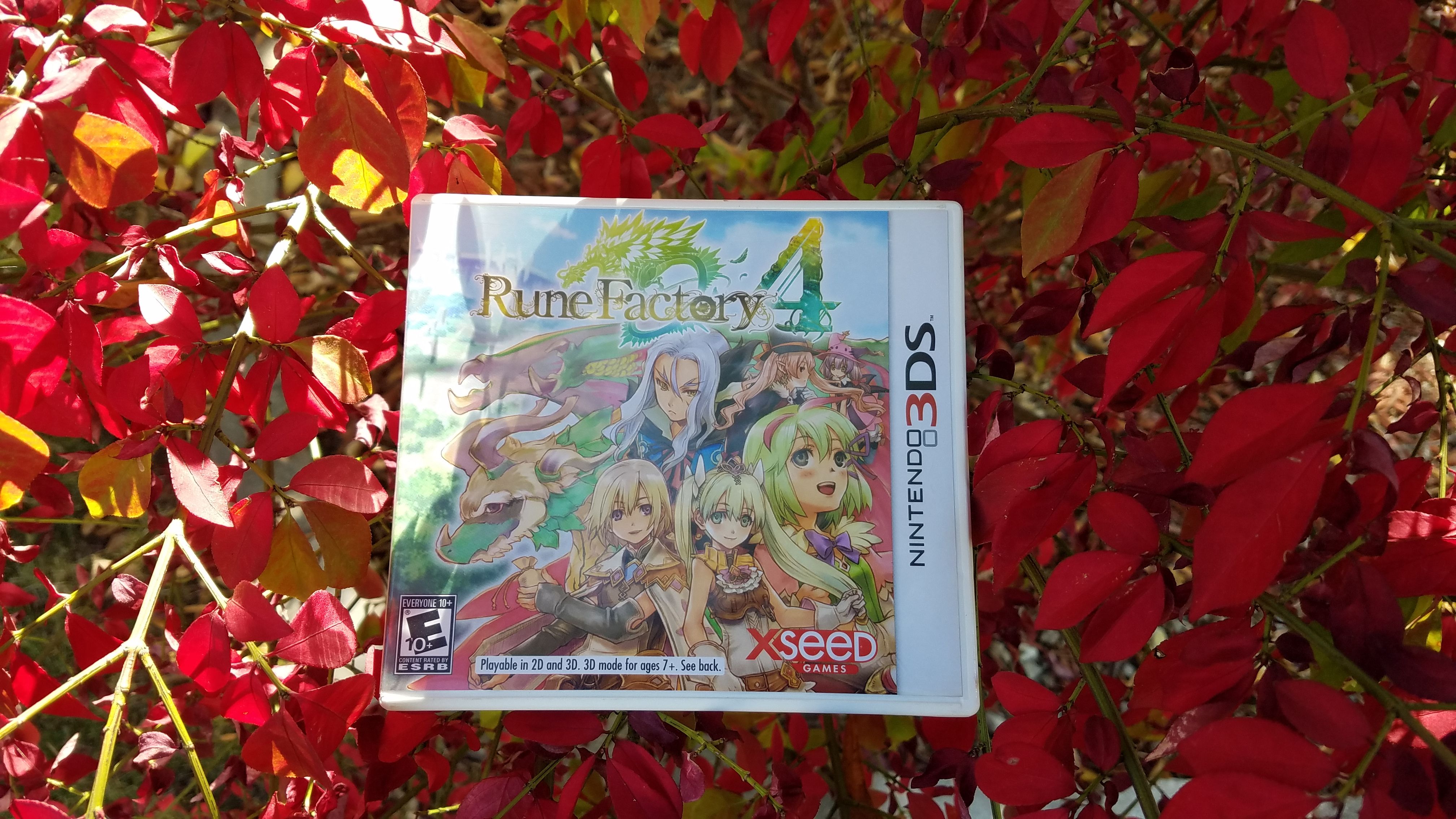 My impressions of the game just based off of its front cover are definitely positive. I love the anime-esque artwork and it reminds me of many of the fantasy anime I’ve watched like Log Horizon or Sword Art Online.

The game logo is very fancy and that amazing dragon in the background definitely draws me in and makes me want to give this game a try.

Wait, does that white haired guy have horns or really fluffy ears?!

Now, I consulted my wife and she informs me that he is the male equivalent of my beloved monster girls (Monster guys? Monster boys?) and he’s half horse….alrighty then….

Honestly, I’d say just based on the box art I would want to try this game out myself especially knowing it was developed/published by XSeed Games. I’m a big JRPG fan and like Atlus or NIS, XSeed is known for it’s great Japanese ports. The back cover displays more of the beautifully drawn anime artwork showing some more characters and also a few farm animals/monsters.

The in game screenshots are vivid and colorful and JRPGish and make me want to play the game all the more. But am I prepared to plummet headfirst into a magical world? Do I have what it takes to be the new ruler of Selphia?

Although I’m generally not a fan of farming sim games (a la Harvest Moon) the fact that this has dungeon exploration and RPG elements certainly intrigues me. And we can play as a boy or a girl!!!!

Not gonna lie but I’d totally play as a girl just to try and win the heart of horse guy from the front cover. 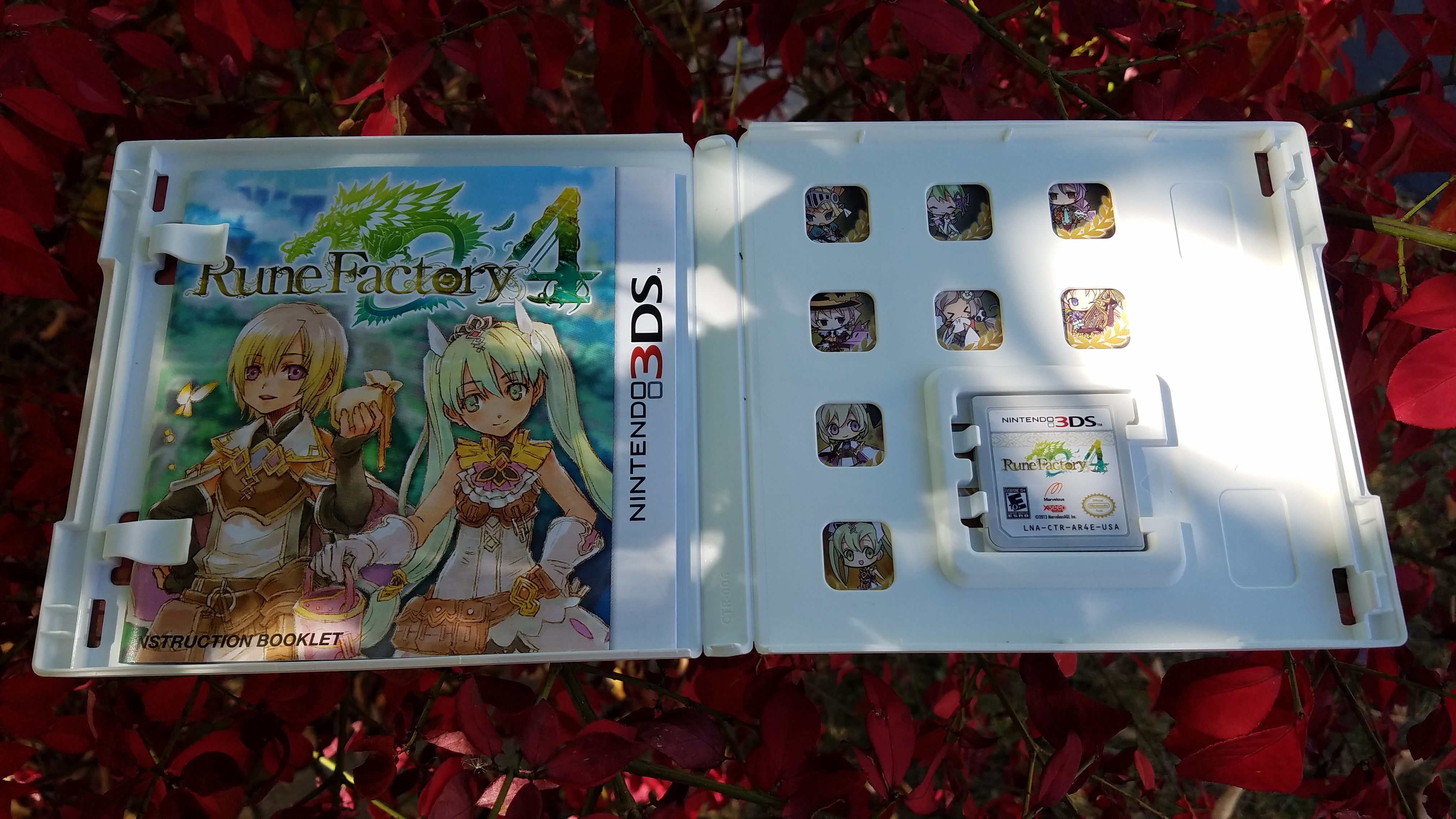 Inside the game case is equally exceptional in displaying the bright and colorful anime-esque game that is Rune Factory 4.

I really love how they utilized the 3DS game case design and displayed chibi versions of each character in those little holes. I gotta say XSeed knows what they’re doing. Even better is the increasingly rare full color booklet insert.

The 34 page booklet included with the game acts as a mini strategy guide giving you lots of background story, small tips on things like the basics of gameplay and short run downs on each bachelor and bachelorette. Did I mention that XSeed really knows what they’re doing? Rune Factory 4 is a looooooooong game. It’s right up there with Disgaea and (insert another long game) with a potential level cap of 50,000. Even after playing around 150 hours my wife only reached around level 196 and this is after a great deal of grinding on her part just to be able to survive and complete the third and final story arc of the game.

Now like most games of this type you can continue to play long after the story ends. Since there is an exorbitant amount of stats, skills, runes, magics, weapons and tools to level up, as well as a never ending supply of dungeons to conquer. There’s certainly plenty of things to keep you busy while you slog your way along to reach that enormous level cap.

My wife says she enjoyed the game immensely and would definitely continue playing it sometime or even restart a new character. If you are a fan of this series or this genre she gives it a two thumbs up and highly recommends it.

There are rumors floating around about a 5th installment and that will be an instant buy for us for sure. We do own the 3rd of the series for the Wii and haven’t played it yet but that’s what this blog is all about amirite?!

As we conquer each game look out for let’s play videos on my YouTube channel PixelBites and let me know what you think!

We’ll occasionally do live gaming sessions as well. Keep an eye out and stop by my Twitch channel at PixelBitesLive when we do!

The list will be updated regularly as I start and finish games as well as when I get new ones. Don’t hesitate to take a look and let me know what you would like to see featured in the future!

Follow me on social media to keep up to date with what we are doing next and other random video game shenanigans!!! See you there!

Wow!! now I want to have Rune Factory 4 more.... I played RF3 on an Emulator years ago and liked it... I love the romance in these games and the best thing of it that it's optional.

The box is good looking... I might want to get it physical when I get it.

Hat of respect to your wife (and you) ~

Thanks for the kind words! The Rune Factory games have always been really well made and the perfect solution for those that want a little more RPG in their Farming Sim.

If the latest installment ends up being launched for the Switch I may just have to play it along side my wife! ;)

The @OriginalWorks bot has determined this post by @pixelbites to be original material and upvoted it!

Congratulations @pixelbites, this post is the third most rewarded post (based on pending payouts) in the last 12 hours written by a Dust account holder (accounts that hold between 0 and 0.01 Mega Vests). The total number of posts by Dust account holders during this period was 2502 and the total pending payments to posts in this category was $1021.63. To see the full list of highest paid posts across all accounts categories, click here.

Congratulations @pixelbites! You have completed some achievement on Steemit and have been rewarded with new badge(s) :