From November 1st to 5th, the Shintiara Role-playing Game team was in Lucca for the biggest comics and games convention in Europe, and second in the world after the Tokyo Comiket, with an attendace of over 270,000.

For those wondering what Shintiara is, it may be helpful to read that post.

Shintiara was hosted in the Games Pavillion by Wyrd Edizioni, distributor of the game for the italian market. Shintiara authors Giovanni Pola, Raoul Farinon, and Marco Riccardi (it's me), went through for demo and signing sessions, while Shintiara cover and interior artist Simone "Nork" Denti was sketching original drawings. Wyrd stand in a moment of relative calm. In the foreground, Shintiara roll-up with a character from the new adventure module

After the succesfull Kickstarter campaign in December 2016, and the core gamebook's impressive debut in April, the novelty of this con was the Adventure module "I Semi del Male", soon available in English too, with the provisional title "Seeds of Evil". This terrific adventure, conceived by the wicked Raoul Farinon mind, shows an entire underground citadel coming from a distant past, an enemy from another dimension, and many other dangers and time paradoxes.

The highlight of the con for Shintiara was reached on Saturday, November 4th: a multi-table game event that involved 25 players and 6 Judges for over 3 hours of game session, through the exclusive scenario "Il Passato che Verrà" (The Upcoming Past). 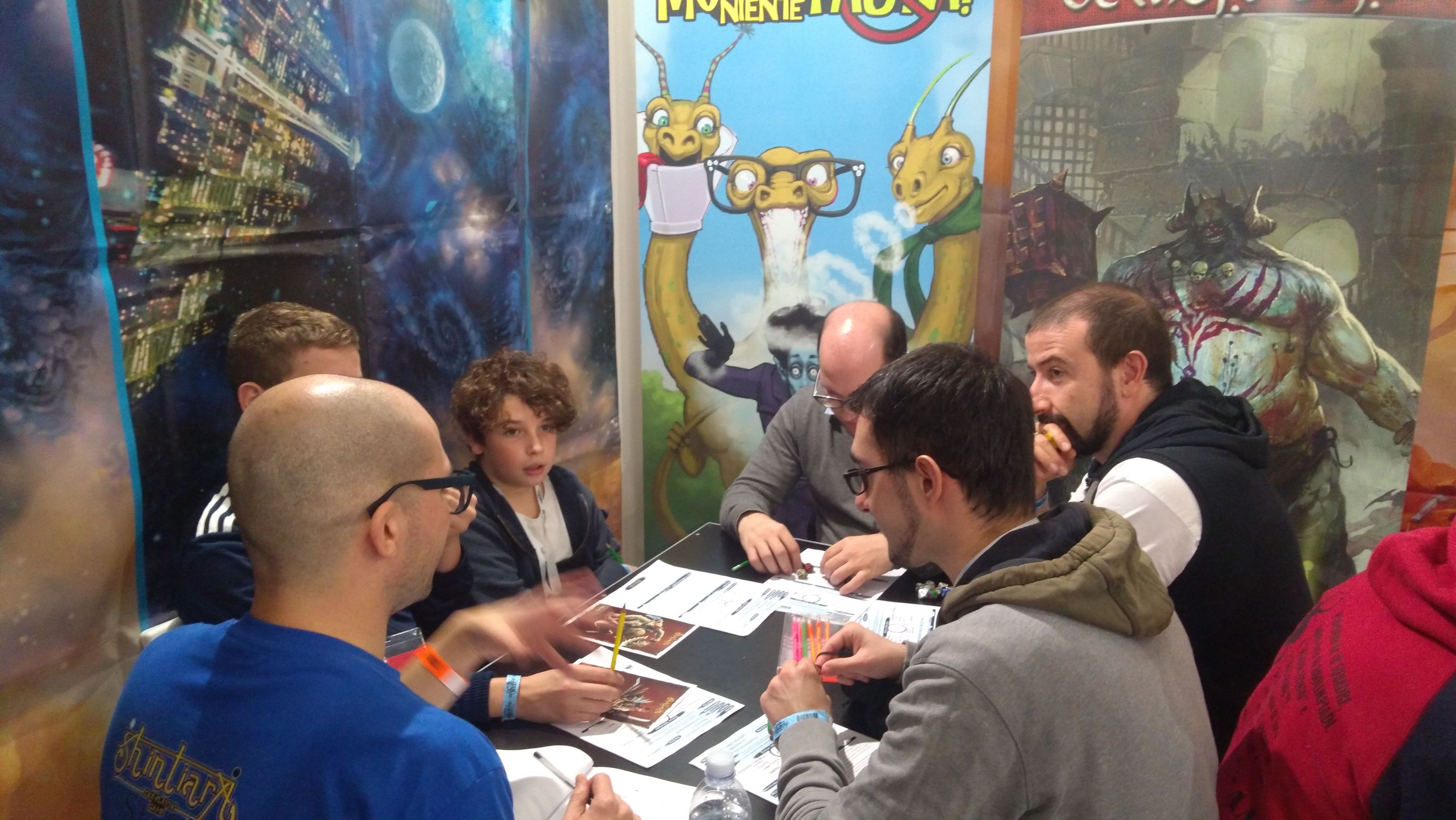 Players of all ages and gaming experience partecipate to the event (also, my bald head). Photo courtesy of Davide Pè Shintiara "father" Giovanni Pola wraps up the event and declares the victory of the Cosmos over the Void (for now...)

Along the five days of the con, over a hundred people stopped to try the game, buy Shintiara or/and I Semi del Male and the gorgeous canvas map, often with an original sketch by Nork. Countless received comprehensive informations about the game, or simply went to greet and to share a joke with us.

We had a very great time in Lucca, and charged our batteries with all the positive feelings who will make us face the future challenges for Shintiara to the best (we also charged ourselves with the well-known Lucca Comics flu, but whatever...). We really want our RPG to spread all over the country and beyond.
The Kickstarter backers all over the world are receiving the English version of the core gamebook just these days, the adventure will follow soon. We plan to distribute this international version worldwide via DriveThruRPG, and in physical copies as soon as we find a foreign distributor. 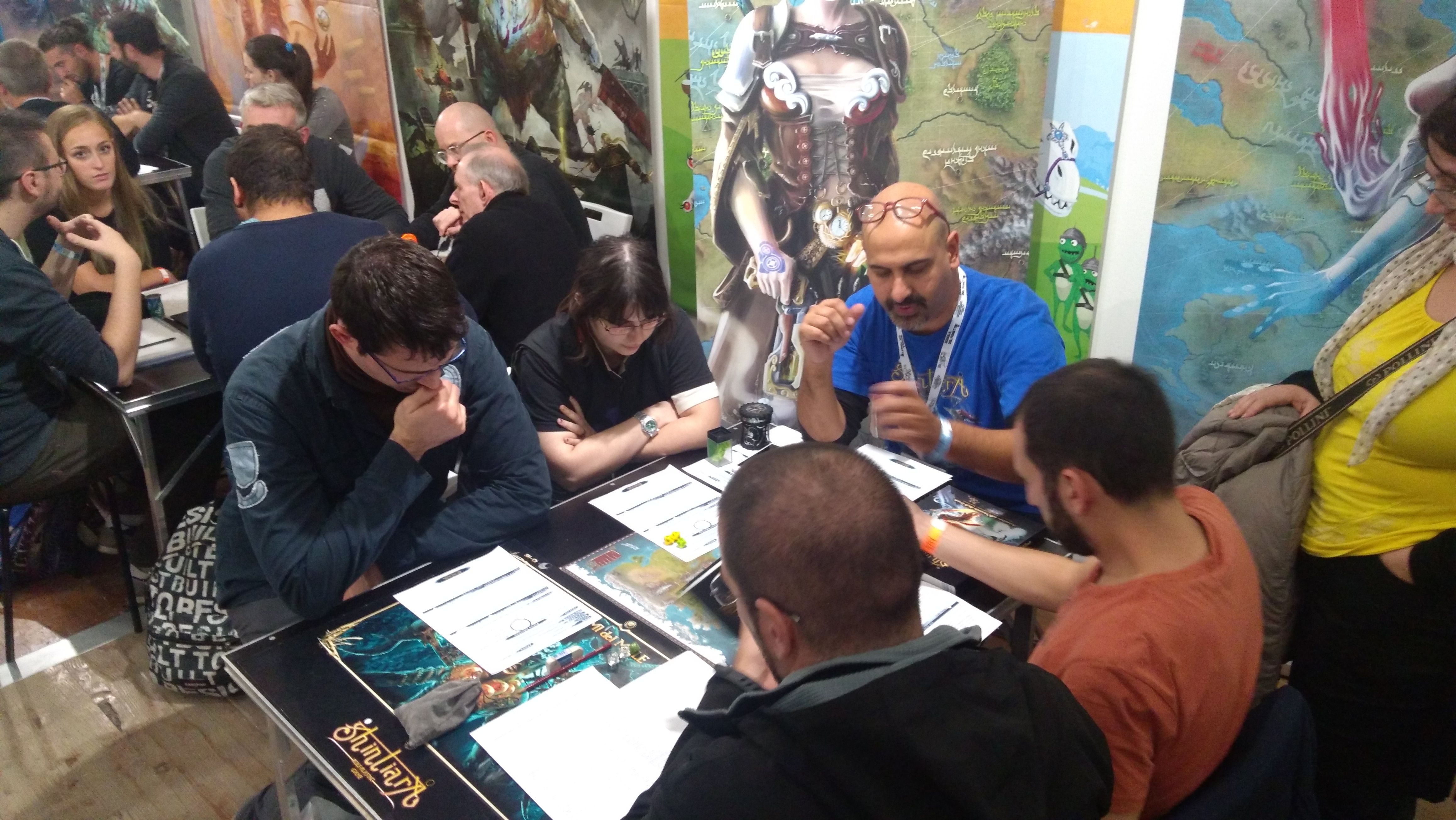 Shintiara adventure, gamebook, and canvas map. Behind, Simone "Nork" Denti is enslaved to draw... note the recurrence of bald men in the Shintiara team (the only one with hair is Raoul)

For further informations about Shintiara next publications and events, here's some links:

All the photos in this post were taken by and belong to me, unless it's otherwise noted.

Submit
$1.30
7 votes
5
Authors get paid when people like you upvote their post.If you enjoyed what you read here, create your account today and start earning FREE STEEM!
Sort Order:
[-]
minnowbooster (73)  ·  2 years ago An incredibile level of original content. I think that all the Shintiara team should partecipate to steemit.. Shintiara has a great concept behind and im sure It would be loved by the steemit gaming community. Upvoted and boosted. (Mettilo anche in italiano..ci sono molti italiani su steemit)

The @OriginalWorks bot has determined this post by @marcoriccardi to be original material and upvoted(1.5%) it!

This post has received a 1.14 % upvote from @buildawhale thanks to: @f3nix. Send at least 1 SBD to @buildawhale with a post link in the memo field for a portion of the next vote.